Next week in Chalk Farm, three DJs will be doing their bit to ensure that clubbing never gets boring. Despacio, the labour-of-love sound rig designed and built by former LCD Soundsystem genius James Murphy and vinyl junkies 2ManyDJs, will be landing at the Roundhouse for three nights of unadulterated disco bliss.

Murphy and 2MDJs (brothers David and Stephen Dewaele) will put the soundsystem through its paces by blasting out floor-filling funk – it’s a simple but sublime formula that offers a unique clubbing experience, and one which royally blew the lid off Lovebox festival in July. Oh, and the Roundhouse will be decked out like a jungle in case there wasn’t enough fun on the cards already. We quizzed two of the beat-geeks to get the full story. 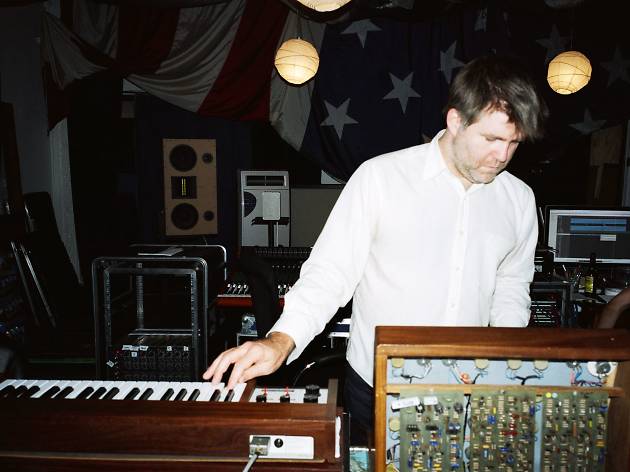 Where did the concept for Despacio come from?
‘It came from David, Stephen and I talking about nights we didn’t like, where people were just staring at the DJs, the sound wasn’t good and it was about the DJ rather than the party. So we decided to make the soundsystem we wanted, which we could play on the whole night, at a party where there would be no visual focus on the DJ.’

How powerful is the soundsystem?
‘It’s 80,000 watts for about 1,500 people. It’s enveloping, it’s warm, like a nice roaring fire. But we don’t throw anybody in. We do turn it up at moments, and I feel it pushes the fight-or-flight response a little, which is nice.’

Has David or Stephen ever played a curveball record which made you think ‘Erm, hang on...?’
‘For sure, that’s part of the fun. Sometimes you’re like ‘‘Dude, what are you doing, what are you doing?’’ I think sometimes we both might have a plan and then it gets thwarted by the other. I like that.’

Who has the bigger record collection, you or 2ManyDJs?
‘I can almost guarantee they do. They don't live in New York, so they've got more space. Plus, ever sine I’ve known them they’ve been maniacally finding records, which I’ve always been impressed with.’

What are they like to tour with?
‘They’ve very funny and very sweet. They do tend to be tireless pursuers of things, though. I’ve been to Japan with them and they'll be like: ‘‘We gotta go out to this place that has this record’’, and then they’ll walk for like 14 hours in pursuit of rare objects.’

What are their dance moves like?
‘They’re Belgian, so it’s a whole different language of dancing. I remember Dave going out to check the sound during a Kraftwerk song and getting lost in the middle of the room while he was dancing.’

What's been your wildest night out with them?
‘We’re old, grown-up men and we usually just have a really nice dinner – woo hoo! We'll find a good restaurant and drink really nice wine. Actually, we always try to buy a bunch of nice wine to have in the booth at Despacio. My fun levels are more moderate these days, but you can absolutely still have fun with wine, like the ancient Greeks and Romans – wine was their business. That was the stuff for them, and they were maniacs.

Why the jungle theme for the Roundhouse?
‘Having a theme just seems like more fun. It’s not strict and you won’t only hear jungle-related sounds. It’s usually an opportunity to make some cheap and funny décor. We all like the weird experience of transforming spaces, it’s kind of a lost art these days.’

Will you drop any jungle tunes?
‘No, there won’t be a lot of drum ’n’ bass, though most of the songs will have drums and/or bass in them.’

Why monkeys?
‘Because they’re fucking cool, man! But don’t get me wrong, I like big cats as much as anybody.’

For anyone who’s never experienced it, what is Despacio?
‘It’s a night where James Murphy, my brother Steph and I play vinyl-only from open-to-close, on a bespoke DJ soundsystem. But that doesn’t explain how magical it is. It’s so far out of the realm of normal DJ culture that it makes no sense whatsoever.’

What makes the soundsystem special?
‘It’s the loudest disco soundsystem in existence. It could physically crush you with its volume, but we don’t use it that way. We just ensure we have an incredibly high quality sound. It’s all analogue and the amplifiers are built into seven speaker stacks around the room which makes a really beautiful Stonehenge of sound.’

Are there any particular challenges that come with DJing as a trio?
‘Steph and I are brothers so we’re much more in-tune with playing after each other. We could do it blindfolded. With James it’s more an adventure because we never know what he’s going to come up with. And that’s the challenge.’

Who’s got the bigger record collection?
‘Well there are two of us. So, obviously ours is bigger.’

Have you ever been on an epic hunt for a record?
‘Between James, Steph and me, we have so many records to choose from. It hasn’t necessarily been about finding a record we don’t own, it’s about finding records that would fit the particular theme and making them work. In the case of The Roundhouse gig, what we’ve done is found records loosely related to ‘‘the jungle’’ – percussive sounds, animal noises – and we’ve started to remix them so they sound good on the Despacio system.’

Are you going to be playing any actual jungle music?
‘No! No ‘‘jungles riddims’’. Actually, we might! But the theme is the actual jungle.’

What else are you doing around the theme?
‘We’re decorating the Roundhouse to look like a jungle as well.’

What's your favourite jungle animal?
‘The baboon, because we’ve got a record where someone repeats the word ‘‘baboon’’. I love it.’

What’s the wildest night out you’ve had with James?
‘There was one time in Paris when I had two glasses of wine, which means I got drunk – I get drunk if I smell a glass of wine – and we were in a revolving restaurant.’

Does James have a signature dance move?
‘Yeah, he shakes his head as if he’s drying his hair.’

Do you obsess over the details of Despacio?
‘I hate to admit this as it’s super-nerdy, but all the records are labelled by bpm and arranged accordingly. Also, every record is cleaned – we’ve got a record vacuum.’

Are you ever tempted to head into the crowd and dance, and just leave the others to it?
‘We do it all the time! We did a Despacio show in Hammersmith a while back, and we just went into the crowd and handed out tangerines and pasties to everyone, because it was 2am and they were hungry.’

Can we expect similar crowd appearances at the Roundhouse?
’Perhaps. Maybe you’ll see us coming out of the jungle.’