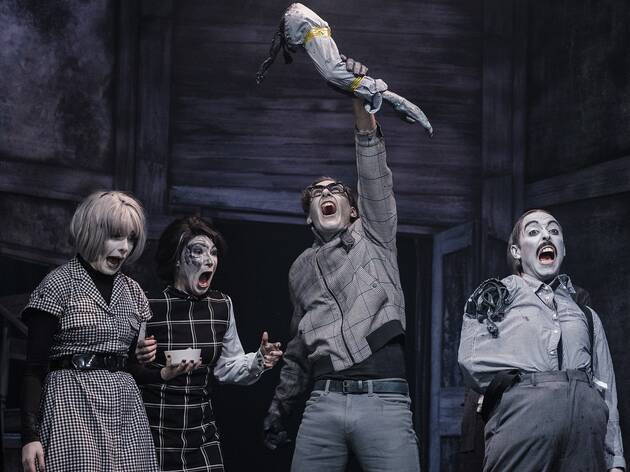 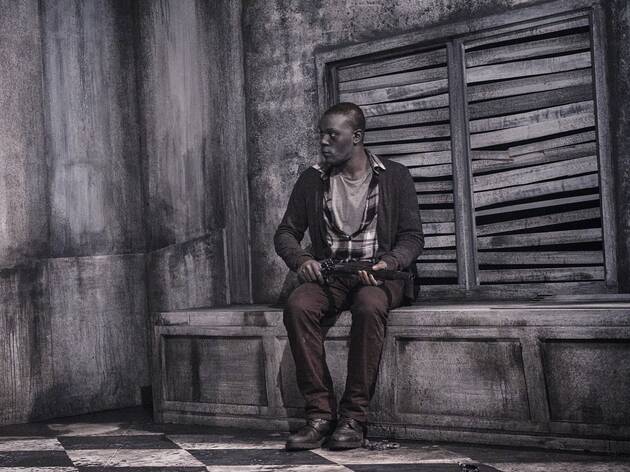 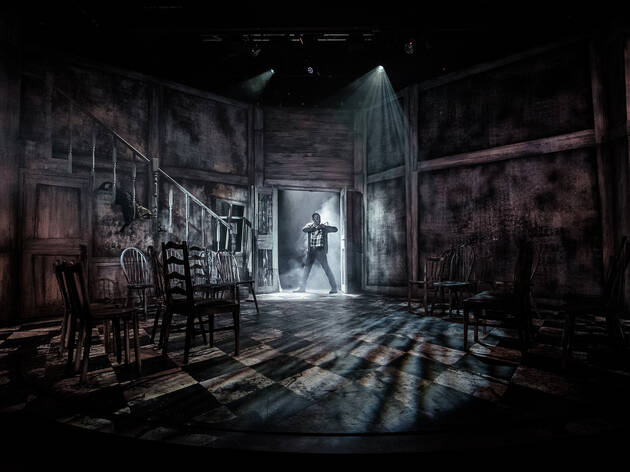 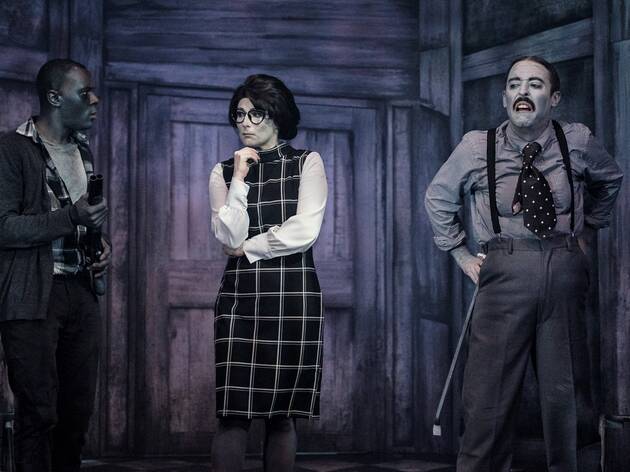 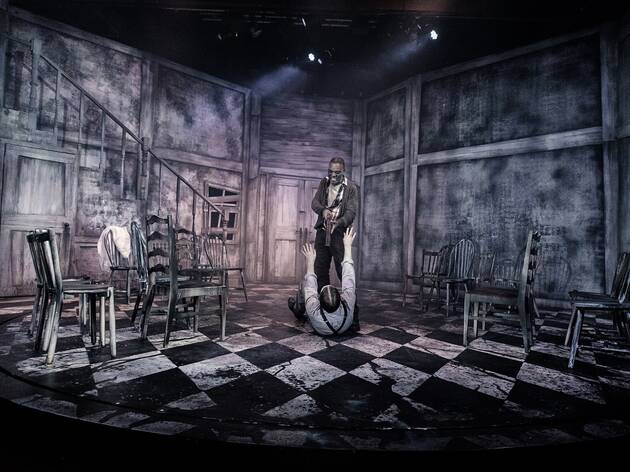 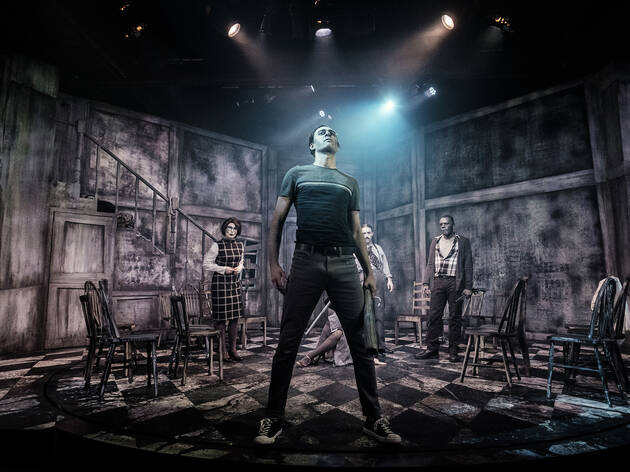 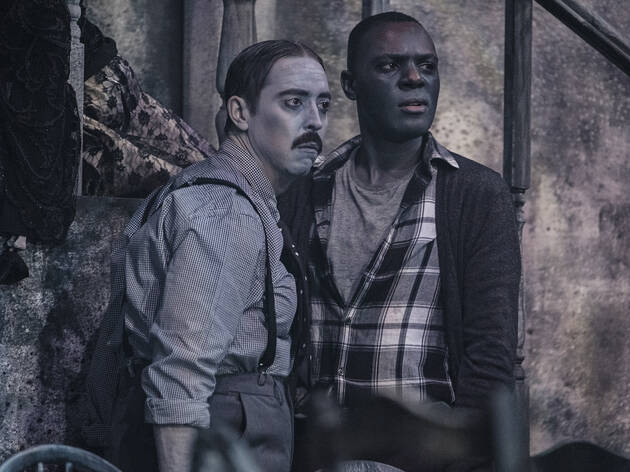 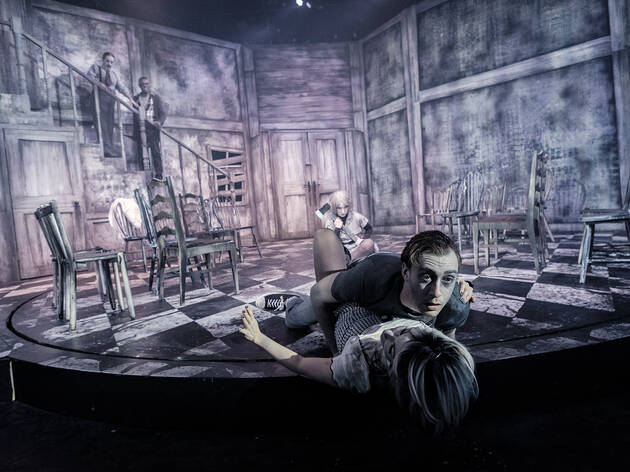 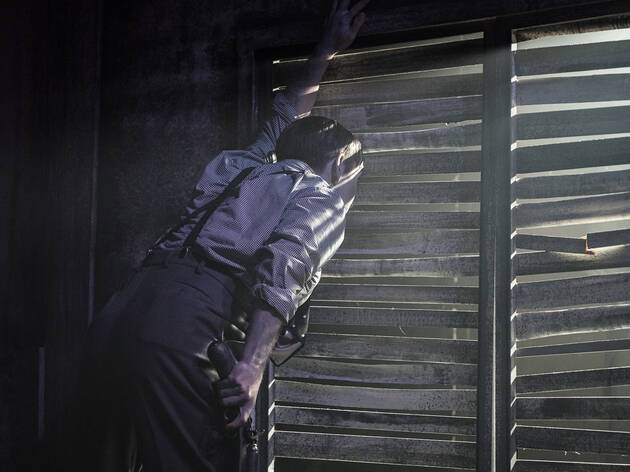 In 1968, George A Romero’s ‘Night of the Living Dead’ was released on an unsuspecting public. It heralded the dawn of the slasher movie and the modern take on the zombie film. Horror was transplanted from the mysterious and unearthly to the heart of ordinary America. The peril was not a curse, or hubris, or ancient demons; the peril was the corpse of your loved one, reanimated, hateful and rotting.

‘Night of the Living Dead Live!’ is, in its first half, a comedic pastiche of the film. It gets by on hysterical absurdity, repetition as a humorous device, and that particular style of Big Movements And Bigger Accents acting reserved for send-ups of 1950s to 1970s Americana. There just isn’t enough substance to make it entirely enjoyable.

‘Night of the Living Dead’ was also a skilful exploration of the stupidity and fallibility of people when faced with a single common enemy. Most of the deaths in the film can be attributed to foolishness, fear or paranoia, particularly the death of the lead character, Ben, a black man shot by police officers on the assumption he must be a menace/zombie (an all-too-resonant metaphor).

The second half of ‘Night of the Living Dead Live!’ is a slapstick exploration of what-ifs that change the progress of the narrative. It’s an opportunity to parse explorations of what director Benji Sperring refers to as ‘political bollocks’ – what if women were in charge, what if a white man had led the group, what if a single person had sacrificed themselves for the greater good. Some of the scenarios are quite funny, but they don’t want to do anything heavier than get a giggle for a call-back.

In Night’s sequel, ‘Dawn of the Dead’, survivors of the zombie apocalypse hold out in a shopping mall, which mindless zombies are desperate to enter and devour within. It’s a ringing allegory for uncritical consumer culture.

In ‘…Live!’ you can pay extra to have a seat on stage in the ‘spatter zone’, despite the fact the presence of audience members on stage is neither addressed nor artistically incorporated, disrupting the balance of the set. Afterwards, if you feel so inclined, you can buy a T-shirt or a mug of the play.

But this is a theatre critic’s review of a play that takes its cue from an era-defining piece of cinema. Let’s consider this play, instead, as a related product: merchandise generated after the original content. Yeah, okay, it’s cheeky, loud and silly. It’s for fans of ‘Scouts Guide to the Zombie Apocalypse’, ‘Lesbian Vampire Killers’ or the ‘Scary Movie’ franchise. There’s probably even Romero fans who will get a cackle out of it. Just not this one.

If you like black comedy and aren't put off by a bit of gore then you'll likely find this show right up your street. Offering a predominately humorous take on the film, there's great fun to be had with this spoof take on the original, though I guess it could leave hardcore fans a little disappointed, but only those that don't like a laugh.

For maximum immersion, you can choose to "get amongst the gore' and the heart of the action in the 'splatter zone' with an onstage seat to watch the performance happening all around you. I had one of these seats and I'd thoroughly recommend the rare close-up experience they afford, though you will need to pay a little more for the privilege. For these seats, you're also kitted out in a boiler suit to protect your clothes from projectile slime generated by the many gory deaths (and trust me you'll need it!).

The plot follows the attempts of a bunch of folks thrown together by chance, in trying to escape a zombie apocalypse fate. Almost like a horror version of 'Sliding Doors' the same scenario is played out multiple times, showing the varying outcomes had things been done differently. Played to great effect with plenty of laughs along the way it just keeps getting better and better, until a fantastic finale. Not one for the squeamish or faint hearted, but if you love all things zombie then this is most definitely for you!

Night of the living dead was a riot of a show, for those who love gore, zombies and black comedy.

I was sitting in the front row seat on stage and experienced the action up close. When we arrived we were provided protective gear (fashionably grey boiler suits!) and given an audience briefing. We were then led up to the stage to take a seat. It was a unique experience to be in the centre of the stage, with the actors moving around and getting squirted by fake blood. It was a really fun show and would definitely recommend the onstage seats for those who want to be part of the action.