David Tennant bounds into a serviceably plush meeting room at ITV, a ball of bonhomie and enthusiasm, engaging and engaged: all the attributes that make him such a crowdpleaser. He’s 41 now, but his boyish ebullience, carefully dishevelled hair and tweed trousers (okay, maybe not those) mean he could easily pass for ten years younger. ‘The notion of having to be attractive and manly is something I find very difficult to come to terms with,’ he says, wriggling uncomfortably in those tweed trousers, but it’s hard to imagine any previous occupant of the Tardis pulling off wearing Converse.

This is a big year for Tennant, as he bids to step out from the long shadow cast by ‘Doctor Who’ once and for all. He already has an electrifying run of Shakespearean leads behind him, most notably 2008’s lauded ‘Hamlet’. His fourth in a row will open in October. ‘I’m working my way through my student wishlist,’ he says of playing the king in ‘Richard II’ at the RSC (where he also sits on the board), before the production transfers to the Barbican in December.

His latest television project is ‘Broadchurch’, in which he plays a policeman – only his second, no mean feat in the crime-ridden world of TV drama. A claustrophobic, tightly scripted eight-part series from occasional ‘Doctor Who’ contributor Chris Chibnall, it examines the ripple effects of a child murder on a coastal community. But while his high-calibre co-stars, including Olivia Colman, Jodie Whittaker and Andrew Buchan attempt West Country accents with mixed results, Tennant dodges that bullet. ‘As long as my character came from a big city, it didn’t matter which,’ he chortles with delight. ‘And what do you know? It turned out to be Glasgow!’

Tennant grew up just outside the city in Paisley, the son of a Church of Scotland minister. ‘Being a minister is sort of like acting,’ he has said, but from the age of three it was young David who was telling everyone he wanted to be an actor. ‘I’ve always been fairly single-minded about it,’ he laughs now at his precocity. ‘I don’t know what else I would have done. I remember watching “Grange Hill” and thinking: How do they all get to be in things and I’m in Paisley, doing my O-Levels?’

‘I went to a Saturday-morning drama club that I got two auditions out of, neither of which worked out, which was kind of infuriating. But I’m glad I didn’t spend my childhood doing that – I look back on some of my early stuff and it’s quite arse-clenching.’ Now, arse at ease, he’s thoughtful about the craft of acting, but absolutely firm on the practicalities. ‘It’s a lovely life when it works. The trouble is there’s no structure, or justice, or logic to it. You shouldn’t encourage anyone into it. But I really don’t hand out advice about acting, because who the fuck knows?’

Well, he does. He really does. Having carved out a growing reputation on stage and on the small screen, his arrival in ‘Doctor Who’ turned an unexpectedly impressive revival into a globe-straddling phenomenon. It was a career-defining role, one which he seized with the enthusiasm of a lifelong fan and the skill of an under-appreciated talent now given its head. It turned him from an actor into a star – so it would be odd if he was excluded from this year’s fiftieth anniversary celebrations, even if he’s ‘beginning to give up hope that anything’s going to happen’.

‘You can’t ever shrug it off,’ Tennant says of the role he coveted since childhood. ‘Sometimes it’s a really lovely thing – even people who don’t watch the show love the idea of it. But you can’t switch it off when you’re buying a coffee and want to get home quickly, and five kids want a photograph taken.’ He looks sheepish, and hurriedly adds, ‘That makes it sound like a trial, and it’s not, but you can’t choose it. It’s part of the deal and it changes the practicalities of your life.’

Such hassles didn’t necessarily stop when he put down the sonic screwdriver in 2010. ‘Twitter! It’s like being stalked by committee!’ he shouts. ‘Come and say hello if you want, but not for the sake of twittering about it.’ It’s a reminder that Tennant guards his privacy carefully. A master of deflection, his stonewalling over his personal life is all the more impressive for being carried out with a smile.

‘This is where I try not to answer the question you’ve asked, isn’t it?’ he says, puffing out his cheeks and tapping the sofa nervously as we circle the subject. He’s now married to Georgia Moffett, the daughter of fifth Doctor Peter Davison (yes, really), who is expecting their second child. And that’s more or less all we know.

Typically, he characterises his caution as a matter of courtesy: ‘You’ve got to be consistent for your own sanity. It’s a bit unfair to be doing one interview talking about it and then clam up in others. People want to know, and I understand the impulse, but when I realised how interested people were, it made me feel a bit queasy about giving it away.’

He’s quite happy to acknowledge that no such planning or strategy goes into his career. ‘If a nice script comes along and I don’t want someone else to do it,’ he says, ‘then that feels like the reason to do something.’ Professional jealousy? He laughs guiltily. More a series of accidents, then – and largely happy ones, at that. There has been the very occasional misstep: he tentatively refers to a stint hosting C4’s patchy panel show ‘Comedy World Cup’ as ‘an excursion into another world to see what it felt like’.

This urge to test his genuine versatility is understandable. But the enduring mystery is how a man with such a heavyweight CV in theatre, radio and television has never quite made his mark on the big screen. When I suggest that his cinema work has been lighter than the rest, he looks thoughtful. ‘I suppose that’s broadly true, isn’t it?’ he says. ‘But then I think a lot of film is. The gritty indie films are a lot rarer than the films that aspire to fill multiplexes.’

And if films like ‘Nativity 2’, ‘St Trinian’s 2’ and ‘Fright Night’ haven’t exactly filled multiplexes or wowed critics, he seems genuinely unflustered. Nor should his upcoming voiceover work in ‘Postman Pat: The Movie’ unduly trouble awards panels. ‘I just hanker for things that are good,’ he grins. ‘I’m as happy doing “Postman Pat” as I am doing “Hamlet”.’ Really? ‘They both have challenges and they both have delights. You’re just trying to do your best for the audience.’

Not that he isn’t up for a struggle. There’s a sudden flash of steel when talk turns to the government’s cuts to the arts. ‘It’s miserable, isn’t it? I don’t understand any of the policies any more, other than this sense that although it may not be working, we said we were going to do this, so we’re going to keep doing it so we don’t look stupid. Well, I’d rather you looked a little bit stupid than we all go down the toilet together.’

His anger is startling, but stems from an innate generosity of spirit – that others might be denied opportunities he had as a young stage actor. Opportunities that eventually led him to ‘Richard II’. He’s excited by the play, though taken aback by comments made by director Gregory Doran (who also directed ‘Hamlet’) suggesting the role’s volatility and fragility might be ‘alien to David’s character’. ‘I wouldn’t have thought that’s true at all,’ he muses, his voice rising an octave. ‘But that’s obviously how he perceives me. Either that or he was trying to come up with a soundbite. In “Hamlet” I spent a lot of time terrified to my bones, but maybe I’m quite good at hiding it.’

Perhaps his apparent self-assurance is what made him such a good Doctor Who. However eccentric his career choices might appear, he’s happy with them. If people enjoy his projects, even better. If they don’t, that’s okay too. David Tennant is unusual indeed: an actor as happy in his own skin as he is in anyone else’s.

Read our review of the first episode of 'Broadchurch' 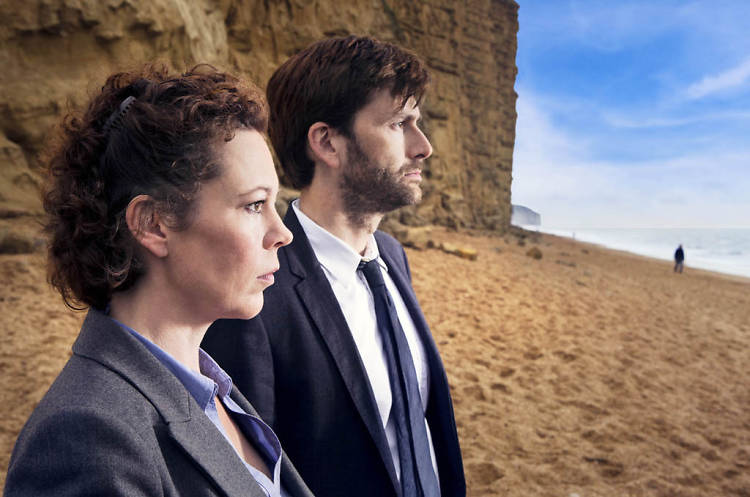 David Tennant and Olivia Colman are the ill-matched investigators charged with finding the killer of a young boy in a seaside town. Jodie Whittaker and Andrew Buchan are superb as the bewildered, grieving parents.