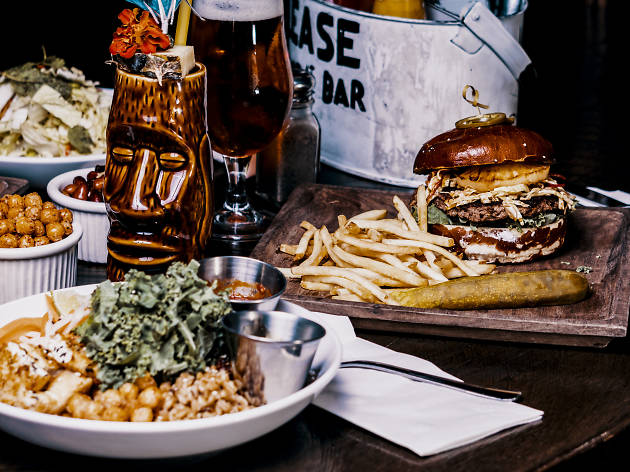 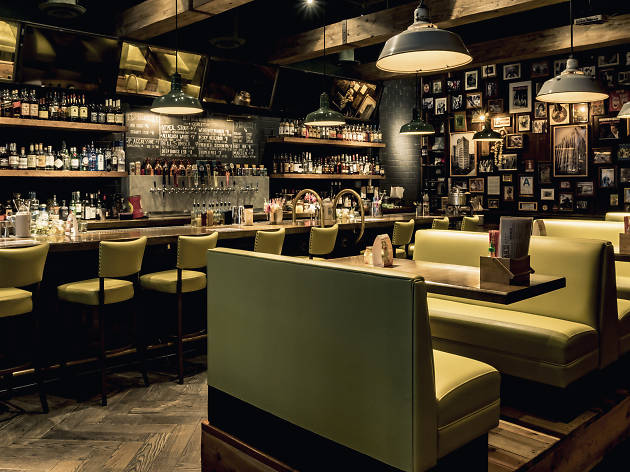 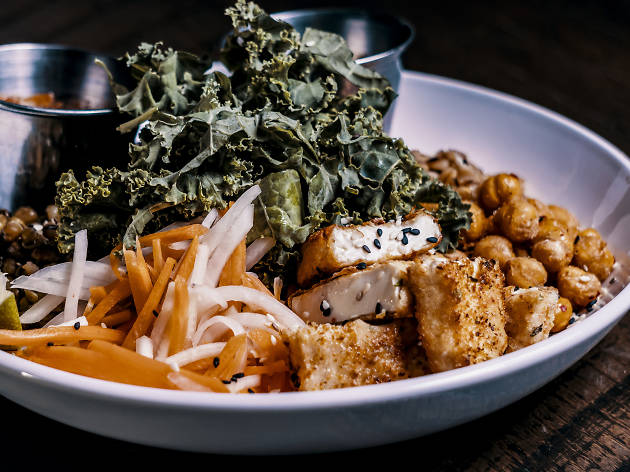 Beelman's Pub is now Beelman's, an all-vegan, Asian-inspired pub, as of November 2017. Find street food, bar snacks and Impossible Meat burgers, as well as tiki drinks and frozen cocktails in the heart of DTLA. Below, find our review of Beelman's Pub, the original European gastropub-inspired concept that ran from 2014 to 2017.

Recently opened in the heart of DTLA, Beelman’s Pub is the latest venture from Acme Hospitality, the group behind Spring St. Bar, Library Bar and the revamped King Eddy Saloon. Much like Spring St., Beelman’s offers an upscale-but-casual neighborhood bar atmosphere. But while Spring St. peddles domestic draughts and classic deli sandwiches, Beelman’s is billed as its sophisticated European “sister,” with a selection of foreign beers and wines, unique spirits, inventive cocktails and a refined, small-plate menu. In almost every respect, it succeeds—the cocktails, courtesy of the concocting genius Proprietors LLC, go down a treat, while the food hits the mark so often missed by other products of the “gastropub” movement. But there’s the issue: does LA really need another gastropub? As charming as Edison lights are, they’ve become as synonymous with this genre of watering hole as chalkboards and exposed air ducts (Beelman’s has both). Named after Claude Beelman, the architect of some of LA’s most iconic buildings (including the one housing the pub), Beelman’s does depart slightly from the norm with green tufted leather booths, retro pendant lighting, oak floors and, in a nod to Claude, several photos of his buildings behind the bar. Still, it feels like the designers missed an opportunity to indulge in the building’s history by succumbing to modern aesthetic. That’s not to say it isn’t a good bar—a great bar, even—it’s just feels like we’ve been here before.

Good for: Keeping it casual. Wind down with after-work drinks on the outdoor front patio or share a few bites with friends while watching the game. Depending on the night and the fluctuating volume of the music, it could also be a safe pick for a first date, provided you can snag a booth.

The scene: Despite its infant status, Beelman’s has already carved out the feel of a neighborhood haunt. Young professionals and loft-dwelling Downtowners gather for drinks and grub at the casual communal high-tops while the sport du jour plays on two screens behind the bar. During our visit, we survived a false fire alarm and a visit from the fire department, neither of which generated an ounce of the bar’s reaction to the Kings’ Stanley Cup win.

The playlist: “Rock,” in its various incarnations through the decades, makes up a soundtrack that wouldn’t be out of place at a Generation Y house party. We heard The White Stripes and The Clash before getting nostalgic over Weezer.

Bartender says: “We’re trying to get people away from ordering the standard Jack and Coke or Jameson and Ginger by using ingredients not a lot of people are used to.” No kidding. Even for the common cocktail connoisseur, each drink on the menu will likely contain a component that’ll stump you—or at least challenge your pronounciation skills. Pineau des Charentes, anyone?

Drink this: Offered on tap, the Hot Pants ($11) is tart and refreshing, combining vodka, aperol and limoncello with strawberry-pineapple soda for a carbonated kick like a liquid Jolly Rancher. The Accidental Guru ($11), an Irish whiskey drink, uses lime and ginger beer in a welcome departure from a Moscow Mule or Dark and Stormy, balancing the heat of the ginger with crème de peche and Blanche de Bruxelles. Perhaps the most “European” of the bunch is the Try For The Kingdom ($11), inspired by the kalimotxo, a Spanish wine-cola concoction. It blends red wine, Spanish brandy and coke with fresh lemon juice and cinnamon—perfect for sipping on a hot summer evening.