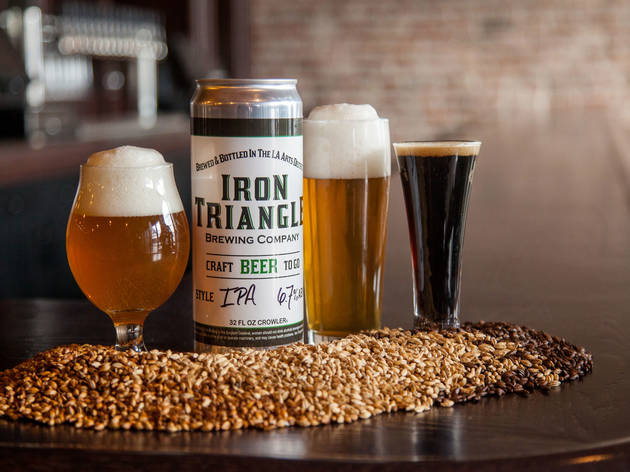 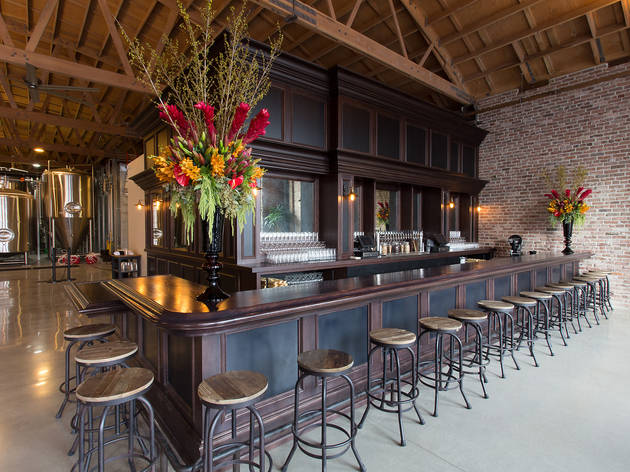 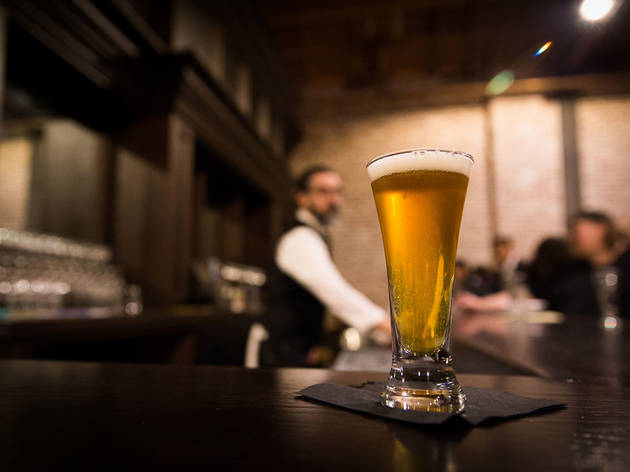 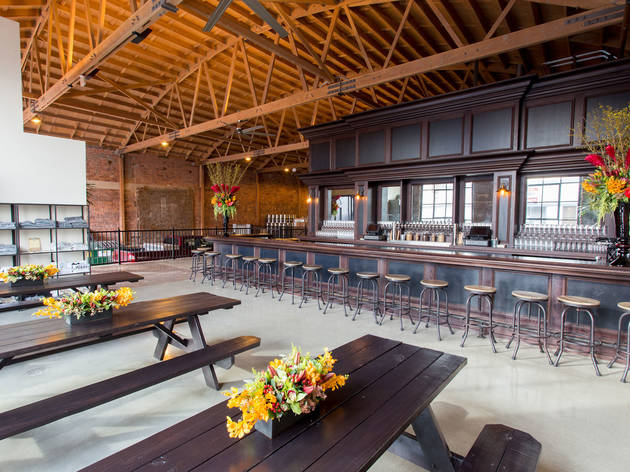 Enough already with the breweries—said no one ever. Remember when LA was severely lacking in craft beer? Thank goodness those days are over. Local production brewhouses are bubbling up all over DTLA, each unique in their own special way, but none quite as large or Prohibition-era as Iron Triangle. Housed in real estate that dates back to 1905, the prodigious facility and tasting room occupies nearly an entire Arts District block, with an output that could eventually challenge that of southland sweetheart Golden Road Brewing. The taproom alone is a whopping 10,000 square feet of raw warehouse, complete with untreated cement floor, exposed brick walls and soaring timber roof trusses attributed to the digs’ 20th century roots. Even with a 16-tap bar, cornhole pit, picnic tables and at least a dozen stainless steel fermenters, there’s still plenty of space to imbibe in peace. Whirling fans and abundant sunlight give the room a relaxed ambience. Without big-screen TVs and a plethora of board games, there’s really just one thing to do at Iron Triangle: Drink some solid beer. Maui Brewing Co. vet Darren Moser excels at making flavorful yet approachable brews, from refreshing ales to crisp IPAs—all, for the most part, $7 a pint. Beer geeks need not fret. Moser’s got you covered with palate pushers like the invigorating imperial black IPA deemed Jawbone or the easy-sipping Socially Awkward sour. Guess you’ve got a new stop on your Arts District brewery crawl.

Good for: Day drinking, preferably during the weekend. That’s when Iron Triangle is at it’s peak, a time when light floods through floor-to-ceiling windows and the sound system blasts everyone’s favorite music. There’s more than ample seating for groups of friends. Pack a picnic or order in from one of the many stellar eateries nearby (check their website for the free delivery options). Owner Nathan Pacetti and team also happen to be really into themed nights. Their Oktoberfest gives rise to plenty of lederhosen-clad staff, though thankfully not every event requires a costume.

The scene: This is a destination for birthday parties, bachelor or bachelorette parties, and pretty much anyone looking to party—but not in a totally obnoxious way. After all, Iron Triangle serves nothing but beer, which hinders the path to sheer belligerence. And most of these people actually appreciate a well-crafted brew. If you’re new to this world, pull up a stool at the bar and let the barkeep enlighten you.

Drink this: Mark your calendar. If there’s one beer worth sipping during the autumn months of September through November, it’s Iron Triangle’s Oktoberfest ($7). Moser’s take on the traditional German-style amber lager is crisp, malty and balanced, sure to please just about every palate. Plus it’s served in a nifty stein, so you’ll feel totally authentic drinking it. Jawbone, a dark-roasted imperial IPA ($7), is another crowd pleaser. This is one of those beers that achieves that rare balance of being both hoppy and sweet, light and citrusy yet dense as molasses. Mulholland’s Stash Barleywine ($7), served as a 10-ounce pour thanks to its stiff 10.8 ABV, is definitely for the more adventurous imbiber. It’s a real boozer, but you’d never guess that from tasting it. The flavor is a delicious combination of vanilla, caramel and fig. We’d be remiss not to mention their Rusty Rivet Pub Ale ($7), a smooth and creamy golden-hued, nitrogenated beer. Because a nitro tap makes everything better.

Our tip: Order 4-ounce pours of all four of those beers for $8. That’s just a dollar more than a pint, and that way you get to try a good variety. If there’s one beer that really gets you excited, take it home in a 32-ounce can sealed in-house, also known as a crowler ($10). Or you could go all the way with a 54-ounce growler for $15 ($20 for special stuff like Jawbone).