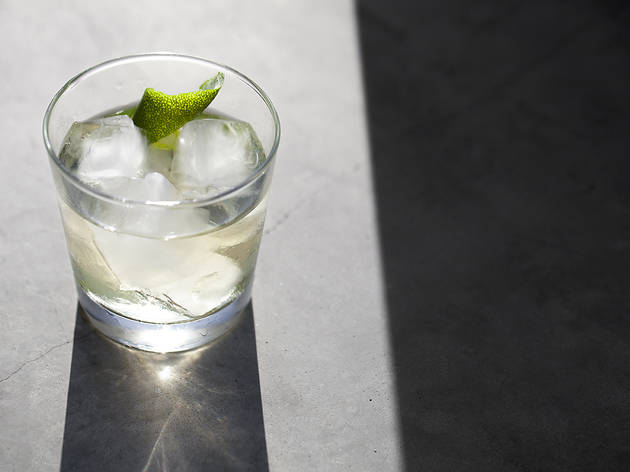 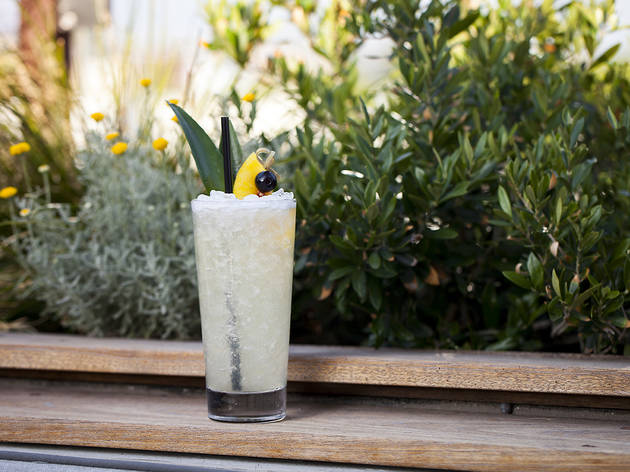 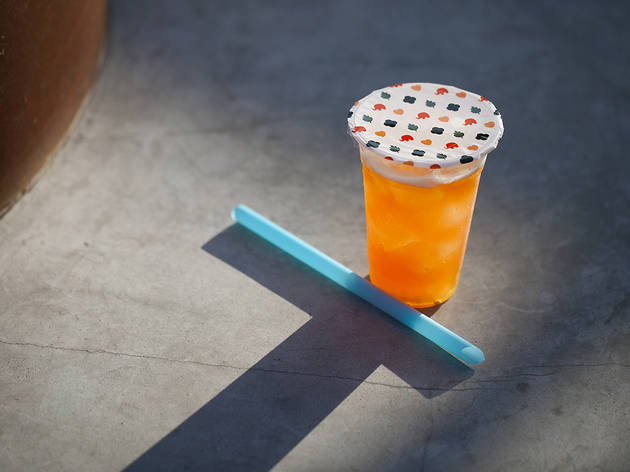 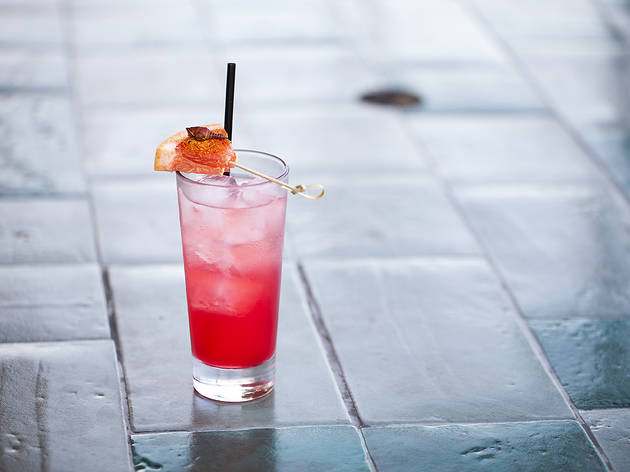 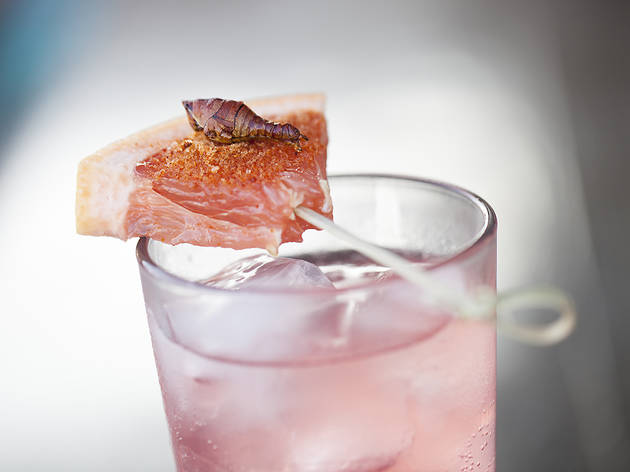 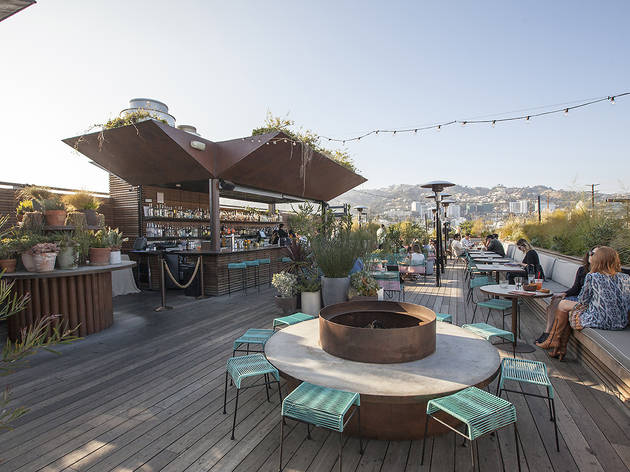 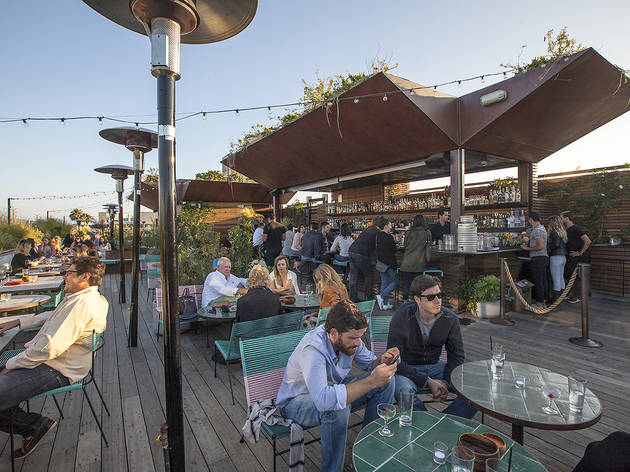 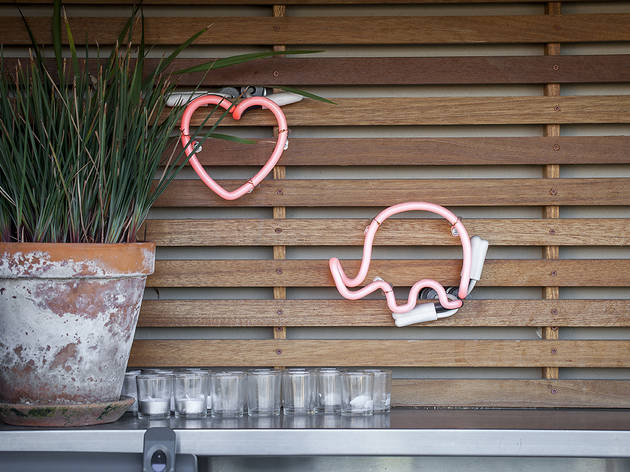 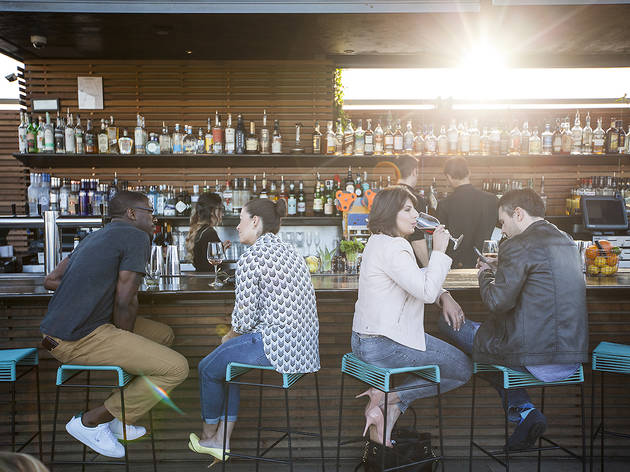 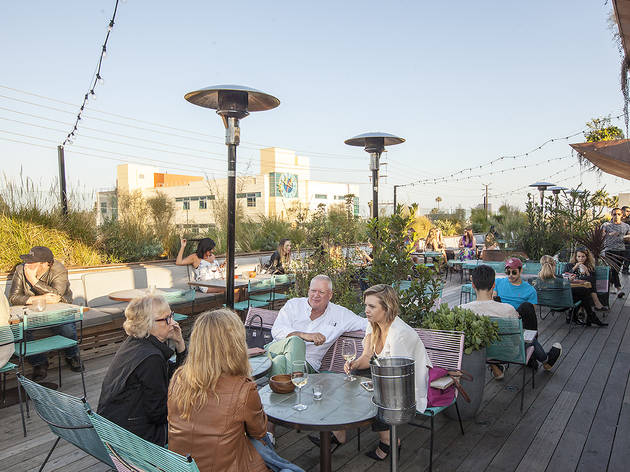 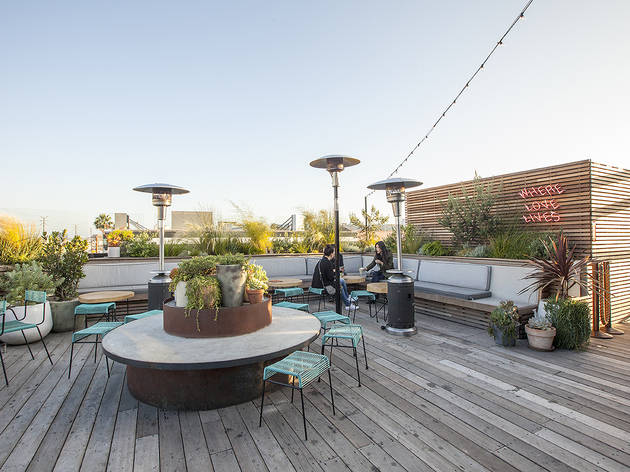 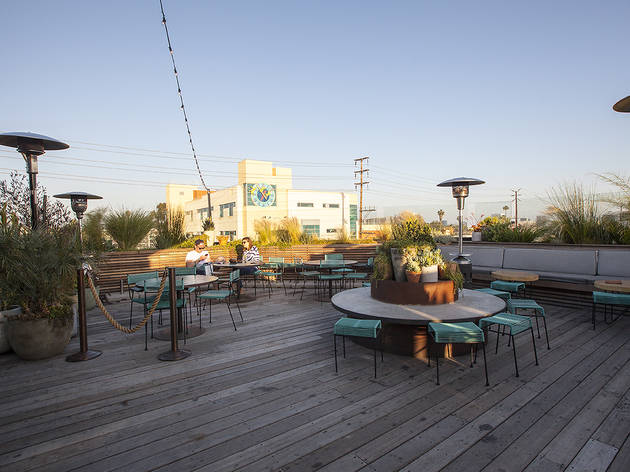 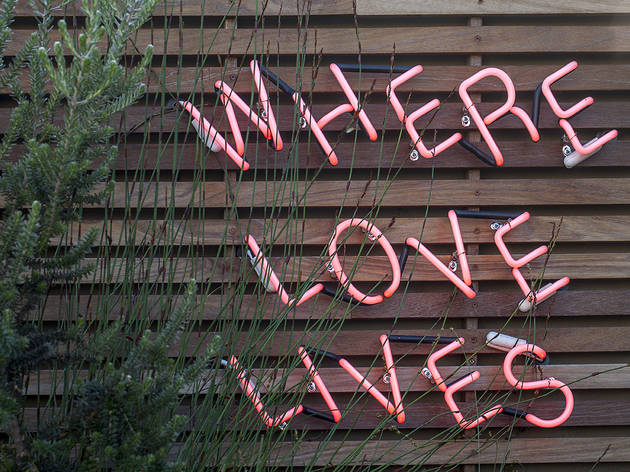 Take in the view of the Hollywood Hills alongside sips of spiked bubble tea at this music-inspired rooftop bar.

There’s a party happening at the intersection of La Cienega and Melrose—and while everyone is invited, not everyone may fit in. That doesn’t mean you shouldn’t give L.P. Rooftop a try, though. E.P. & L.P. (music slang for “extended play” and “long play”) is the brainchild of two seasoned Australian restauranteurs, a multi-storied space where the ground level and stairwell are decked out in macaroni wallpaper and enveloped in a sapphire glow. One story up is E.P., a restaurant featuring a hodgepodge of Asian cuisine. That’s for another night. Keep going until you hit the top floor, swing that tinted door open and breathe in the fresh city air. You’ll be greeted by a good-looking person, who may or may not ask if you're on the list. On most nights, it actually doesn’t matter, so go on in and take a seat in one of those chairs made out of elastic string that’s strangely comfortable. On your left, a reality star cautiously drinks a pink cocktail loaded with bursting boba balls. On your right, a guy straight out of GQ is taking selfies with the Hollywood Hills. This place has killer views, so that’s to be expected. If you’re lucky, you might be able to get into the super exclusive patch of rooftop known as Frankie’s, a private bar with daybeds. Get passed the rope and you know you’ve really made it.

Good for: Sharing a pitcher of spiked bubble tea and Fijian nachos with new friends or industry colleagues as the sun sets on West Hollywood. The dress code tends to be a tad more casual earlier in the week, and seats are a lot easier to come by. Beginning Thursday night, however, the expansive topiary-lined terrace turns into a full-on club, complete with live music and packed crowds—best for singles ready to mingle.

The scene: Trendy is a given in this part of town. There’s a mix of young and old, but everyone is beautiful—at least on the outside. The pretty drinks and stunning scenery combine to give the sprawling deck a hip Hollywood atmosphere. And the fact that incognito types could potentially rent out Frankie’s only makes it cooler.

Drink this: The tiki-inspired Californication ($15) off the “bubble tea mouth party” section of the menu is a blast to drink. Bar lead Brittney Olsen (Break Room 86) has crafted this tropical rum libation with passion fruit boba rather than tapioca balls, which burst in your mouth with every other sip. The bitter Campari definitely comes through, but helps temper the sweetness of the fresh pineapple and toasted coconut syrup. Another swill along those lines is the Rebel Rebel ($13, $75 for a pitcher). It’s a funky blend of pisco, vermouth, fresh lime and pineapple juices, house-made jasmine-infused simple syrup, and yuzu bitters poured over a tall glass of crushed ice—an ideal beverage for rooftop imbibing. Even the non-old fashioned drinkers will enjoy Life Cultivated ($15, $100). Japanese whiskey, cinnamon, ginger, fresh lime zest and cardamom bitters all come together in beautiful harmony. The outcome is a bright and zesty easy sipper. If you're able to make it over to Frankie’s, there’s one adventurous ‘tail off the menu that’s worth checking off your drink bucket list: Creep, a tequila cocktail made with Sal de Gusano (spicy worm salt) and dried crickets. Delish.

Our tip: This place gets crowded, even when it's still early. Since you can’t make a reservation for L.P. Rooftop, it's best to get there right at opening. And if you’ve had a few by the end of the night, you might want to take the elevator. Don’t be that person falling down the stairs.