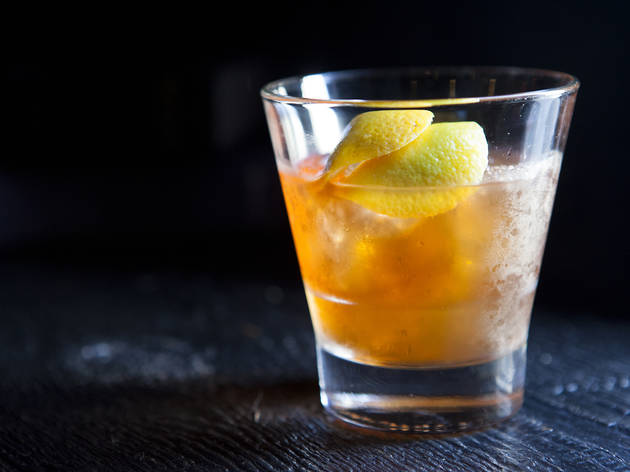 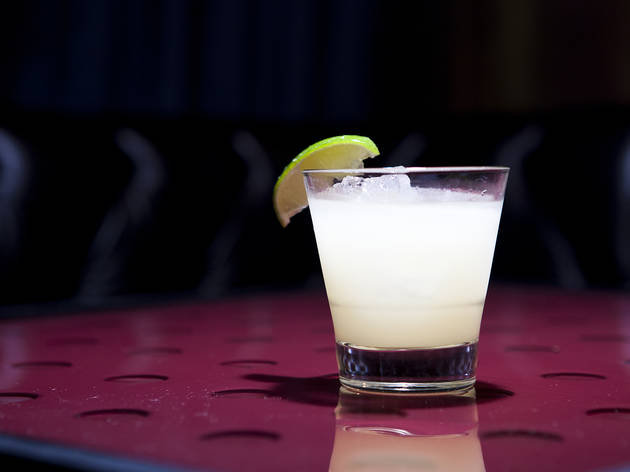 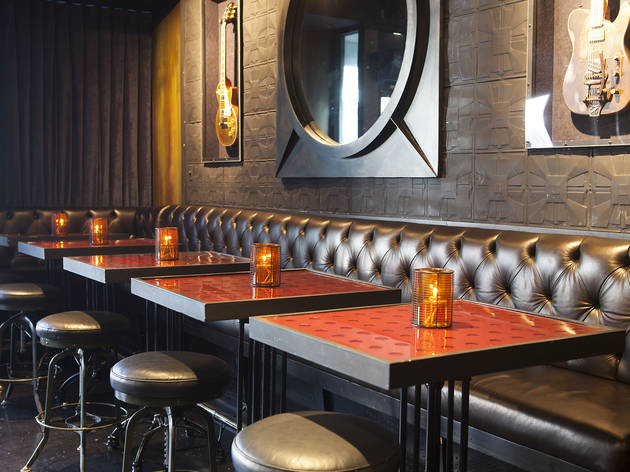 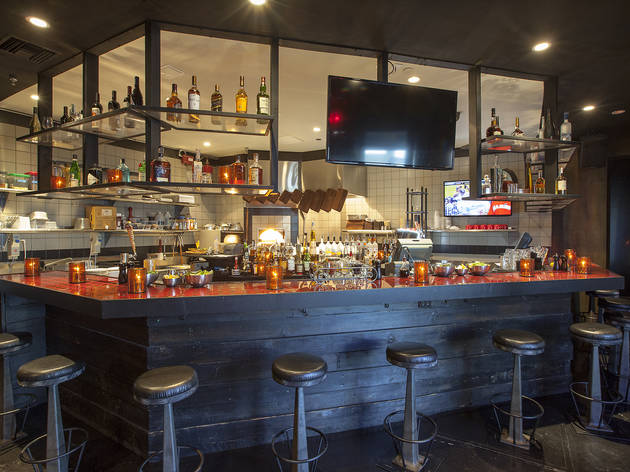 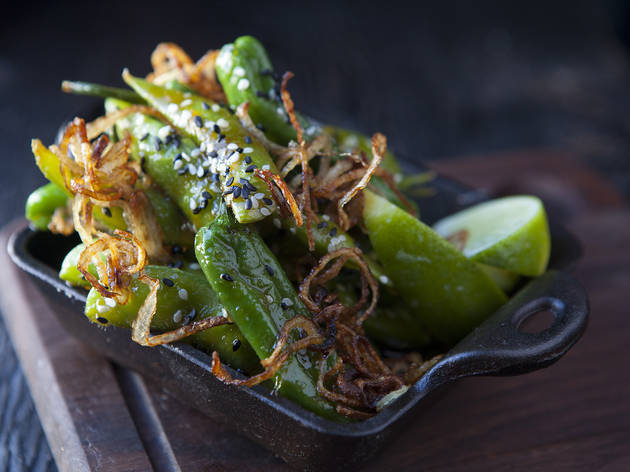 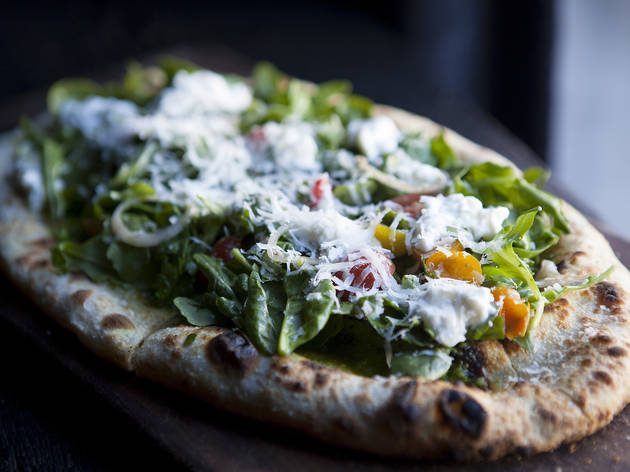 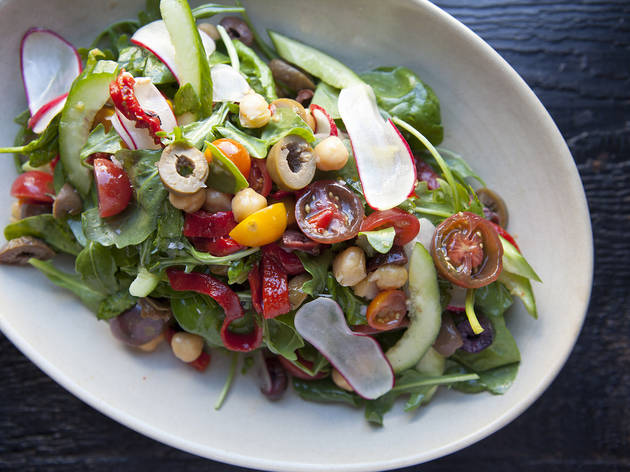 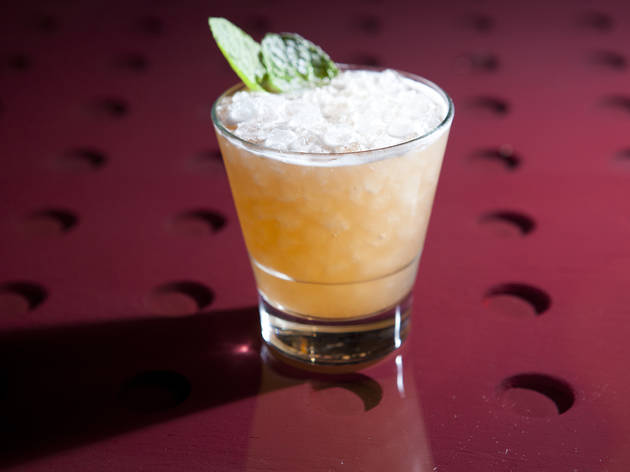 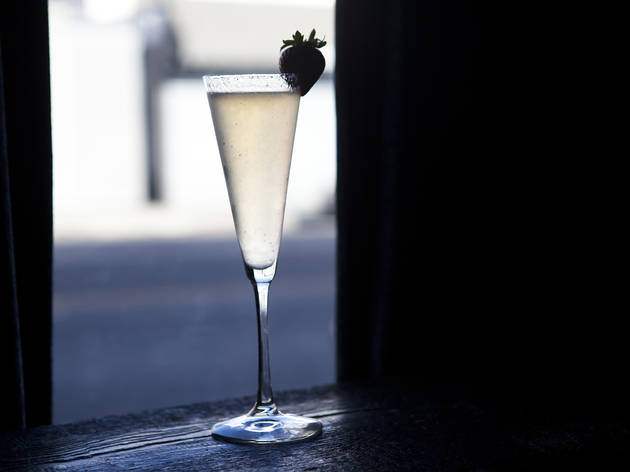 The idea behind the new intimate Sayers Front Room bar that serves as a buffer between the bustle of Hollywood and the semi-exclusive atmosphere of one of LA’s best live-music venues, is the breaking of barriers—attracting more neighborhood locals to stop by for wood-fired pizza (go for Green Goddess, pesto, spinach, arugula, pickled onions and burrata, $12) and a list of signature cocktails prepared by attractive, friendly staff. Housed in the former Papaya King space and richly outfitted with plush leather banquets, black-art deco walls interrupted by in-set guitars on display, gives way to a dramatically lit V-shaped bar that edges into the room, giving patrons a taste of what to expect on the other side of the curtain where impromptu celebrity musician sets have been known to take place. Tucked into one end of the bar is a flat screen TV, which is reflected in the adjacent mirrors, lending that unmistakable blue-hue and game-day vibe to an otherwise elegant space, which seems a little out of place. The old adage of, “something for everyone” is surely the inspiration for this blunder.

Good for: Even if you’re not planning on taking in a music show stop in for a cocktail before or after dinner or meet a friend and share some of their tasty bar snacks (try the generously portioned Cheese Board for $11 or Hand Cut Fries for $7), plus there’s always the potential for a celebrity sighting. Bring a date or come early with friends for some pre-music lubricant before passing through the black curtain and settling into one of the leather-tufted sofas for a night of music intake.

The scene: Angelenos haven’t quite caught on to the new front bar, where short lines form and those in-the-know come for a civilized cocktail or light bite before taking in the early or late shows. As regular club-goers pass through the new space, the surprise of a darkened elegant bar and absence of greasy hot-dog smog, will be enough to warrant an earlier arrival for some, eventually making it tough to grab one of the few bar stools especially as word spreads through Hollywood.

The playlist: With music as the driving force behind the entire establishment, it’s no wonder they have a killer playlist keeping the front bar atmosphere at a lively, anticipatory level (think: the Killers, Bee Gees, Dire Straights and the National).

The bartender says: On Thursday nights there’s an early show and a late show—perfect for everyone. It’s also worth checking out some of the other SBE Entertainment Group venues like Create and Greystone Manor where DJs hold court over live music and dancing is expected.

Drink this: The drinks—commanding steeper club-worthy-prices—are curated in-house and are whipped up with speed and are surprisingly in balance. Stay classy and true to your designer jeans and jackets by ordering up an Old Fashioned (Rittenhouse bonded rye whiskey, simple syrup, Angostura bitters, lemon and orange oil and stirred in a rocks glass for $15)) or a Moscow Mule (Grey Goose Vodka, house made spicy ginger syrup, fresh lime juice, soda, shaken and poured into a Tom Collins for $15. There are nine bottled beers ranging from $5-$8; a few wines by the glass and a surprising bottle of Au Bon Climat Pinot Noir for $30 on the menu—a steal over Vueve Cliquot marked way up to $150.