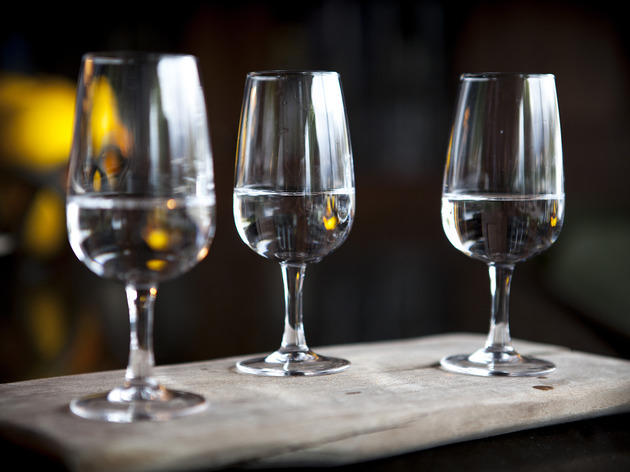 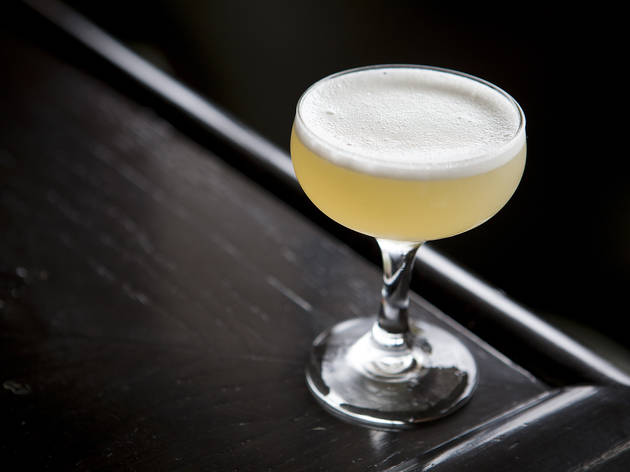 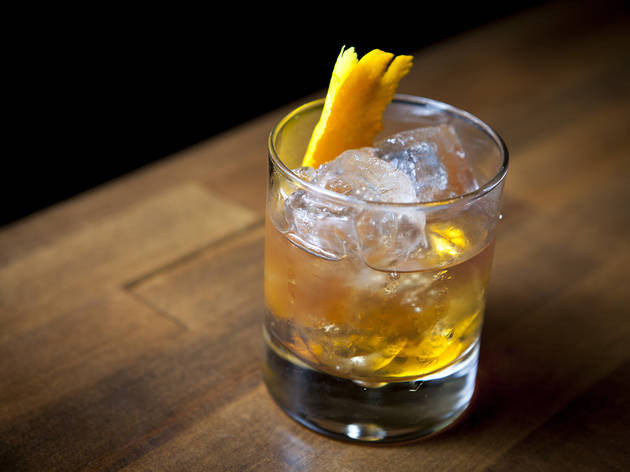 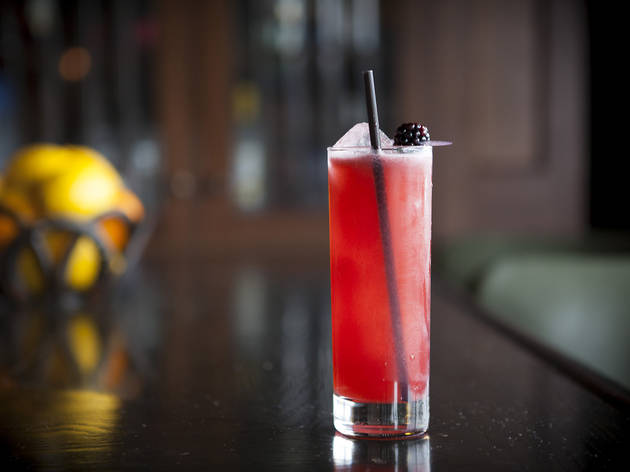 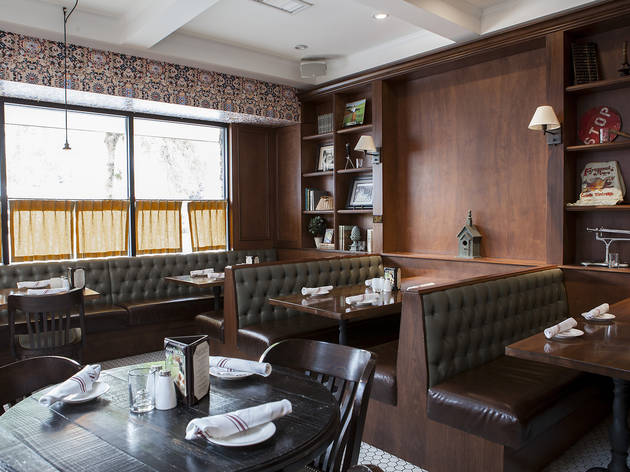 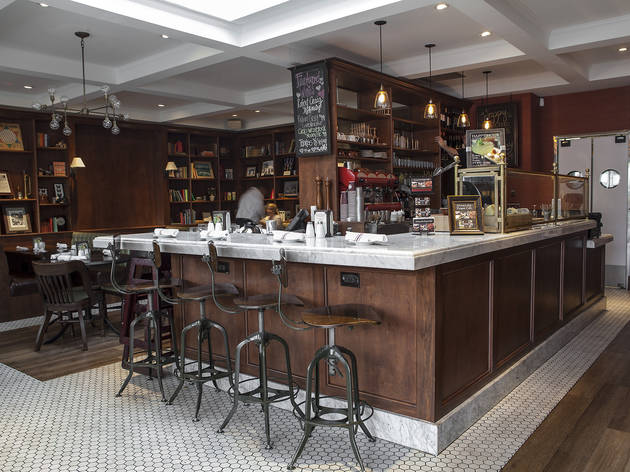 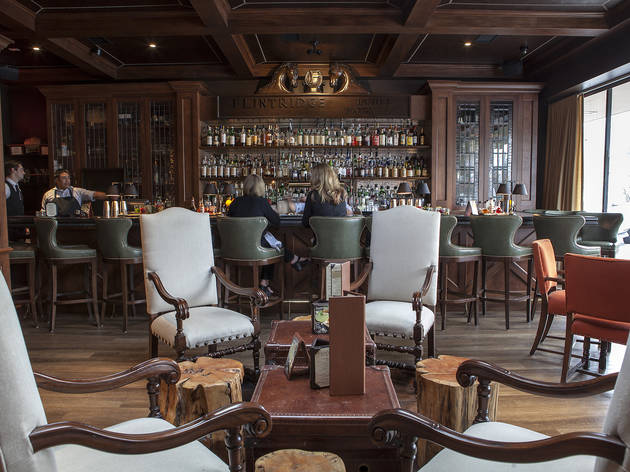 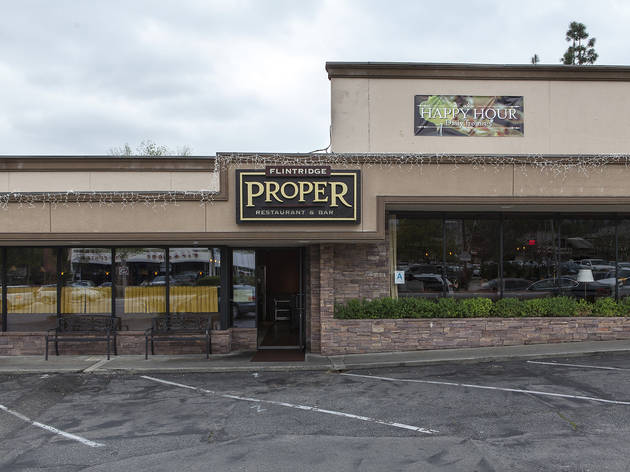 La Cañada Flintridge isn’t exactly known for its nightlife. So it may surprise you that this sleepy suburb, tucked into the foothills between Pasadena and Glendale, is home to the “world’s largest gin selection”—at least according to the owners of The Flintridge Proper (a Guiness World Record application has been submitted to make their claim official). Despite its strip mall location, the Proper feels almost like a private social club. Move through the schmaltzy restaurant into the bar area and you’ll find an old school, wood-paneled parlor fit for Gatsby. The only thing more impressive than the 200+ varieties of gin served here is the fact that the Proper folks make their own: Flintridge Native Botanicals Gin, concocted with locally foraged herbs and botanicals from La Cañada’s own backyard. Gin-phobes need not fret—other spirits are given equal opportunity to shine here. That doesn’t mean the bartenders won’t try to convert you, and be warned: they just might succeed.

Good For: Unwinding after a long week with a well-crafted cocktail. Imbibe with colleagues, catch up with a friend, or make it the first stop on your date night. Even when the place is packed, the noise level stays conducive to conversation, with chatty bartenders happy to fill any lulls between drinks.

The Scene: Fancy but not fussy. A healthy mix of well-heeled, waspy locals; tipsy PTA moms; and red-faced retirees fresh off the golf course. It’s a classy joint, but don’t let that dissuade you—there’s plenty of room for bright young things around here. Sit right at the bar, where you’ll get the best view of the mixology magic as it unfolds.

The Playlist: Depending on who’s behind the bar, anything from Sam Cooke to Jack Johnson, but it doesn’t really matter—the volume is low enough that the music is secondary to bar chatter.

The Bartender Says: If gin isn't your thing but you’re booze-curious, this is the place to take baby steps. The bartenders really do know their stuff, so give them a little guidance and some faith and they’ll do their damnedest to make you a believer. If all else fails, they’ve got a way with whiskey, too.

Drink This: Gin, obviously. Purists should take advantage of the selection with one of four gin flights ($15-$36) ranging from bartender’s favorites to the rare and coveted. House cocktails are adorably named after La Cañada landmarks, but even if you’re not hip to the local history, they’re worth a sip. The Devil’s Gate ($11), which pays homage to a dam by JPL, combines Plymouth gin with blackberries, basil, and lemongrass, with serrano pepper and ginger adding an appropriate touch of heat. The rest of the menu reads like a potable history book, from the 19th century Old Fashioned ($14) made with Old Forester bourbon, house-made barrel-aged bitters, and an impressive display of fire, to Prohibition and beyond—like the Bee’s Knees ($11), with Damrak gin, lemon, and local Altadena honey. For cocktail nerds, it’s hard to go wrong.