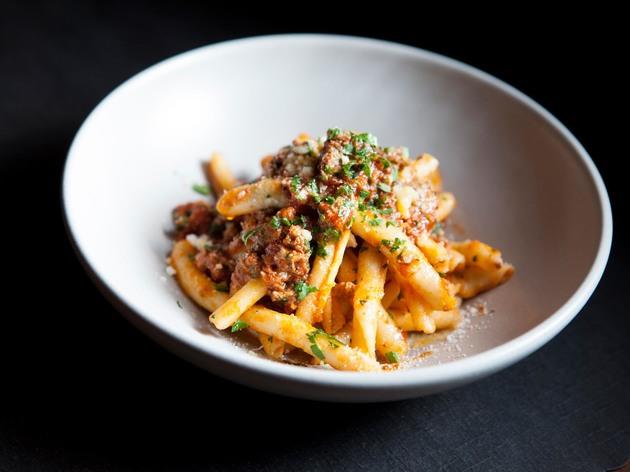 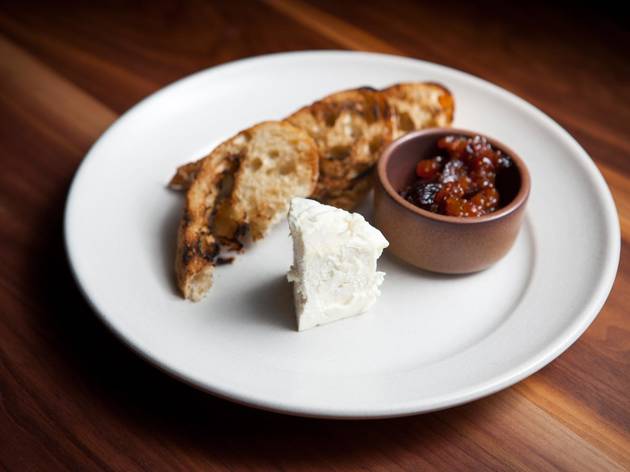 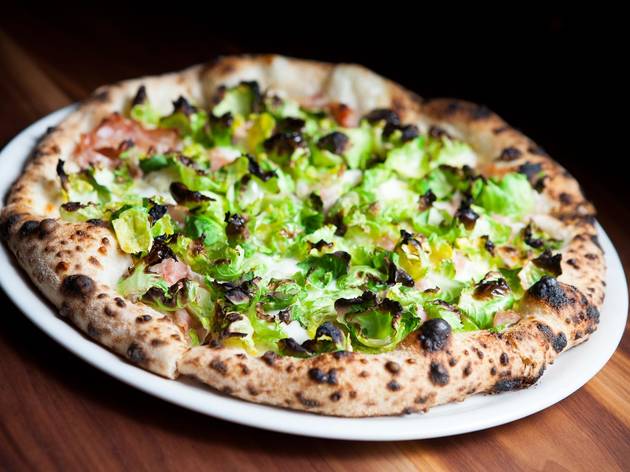 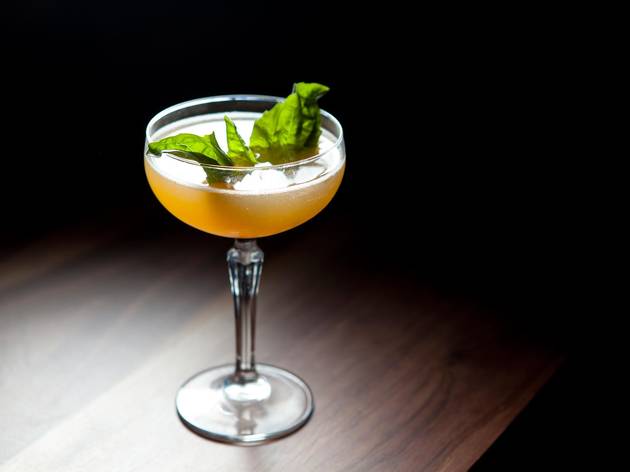 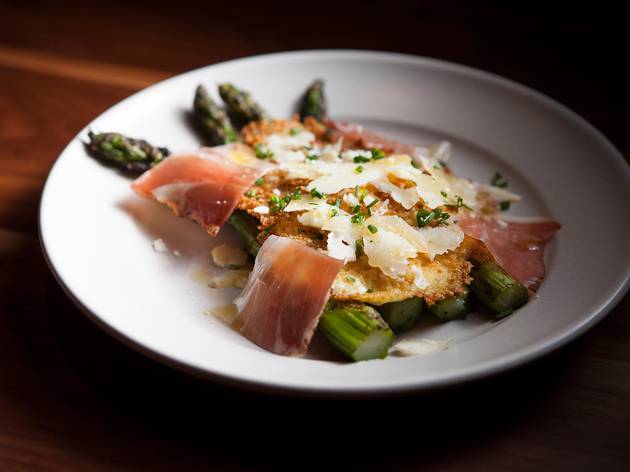 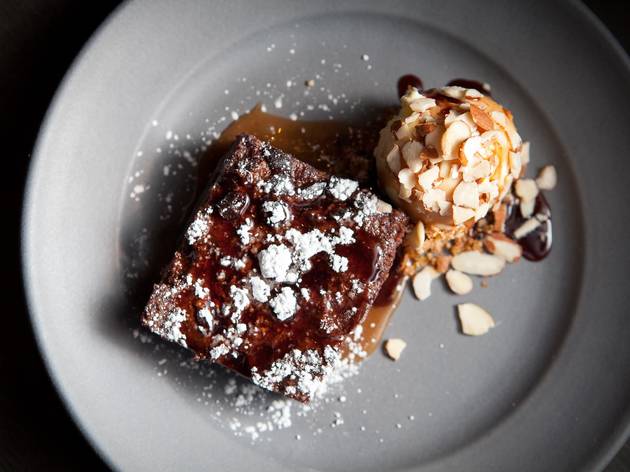 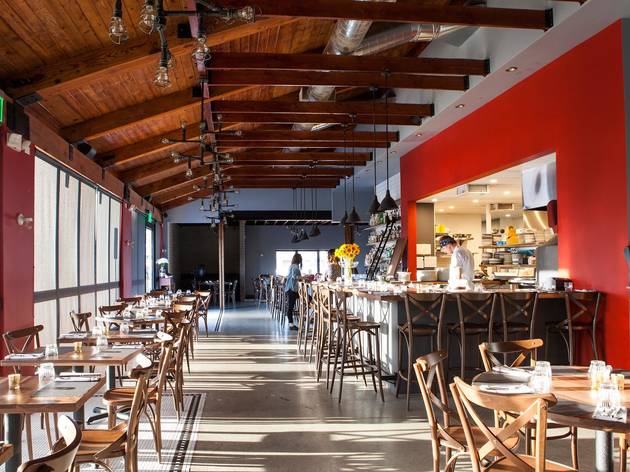 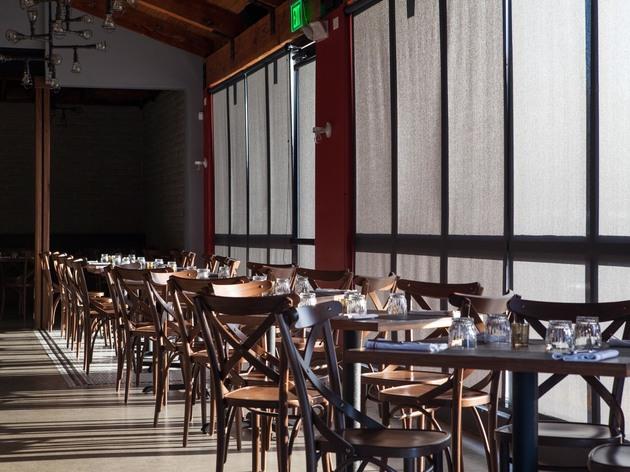 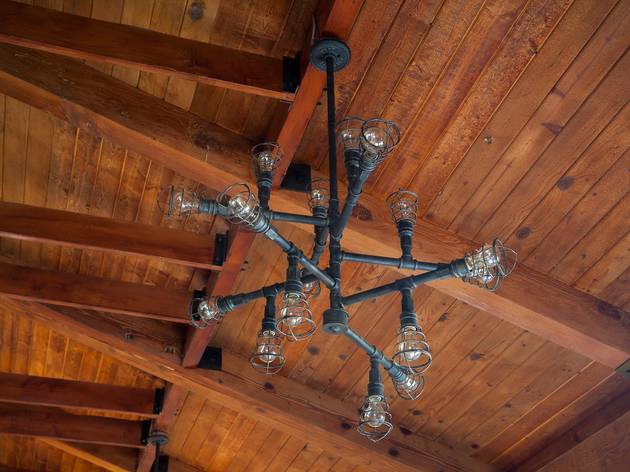 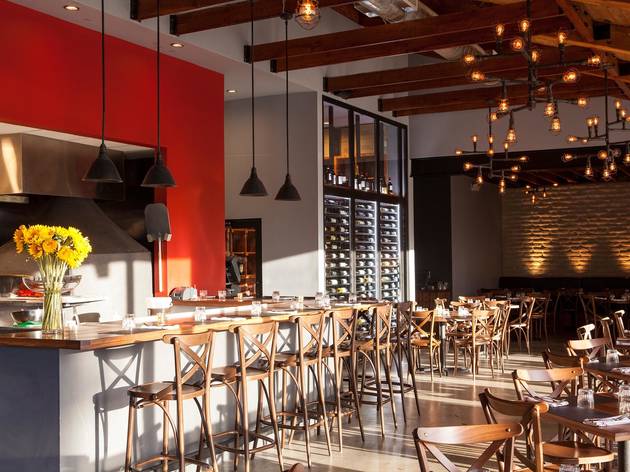 All'Acqua seemed to sneak under LA's culinary radar, absent one minute and then seamlessly operating as if it had been open for months. Perhaps it was the late winter debut, when everyone is just hoping to make it through another family reunion unscathed; perhaps it's Atwater's sleepy, no-big-deal attitude about Village newcomers; but regardless, there it was, packed to the brim one recent evening with locals swirling strands of pappardelle into their mouths under constellation-like light fixtures. Business partners and husband-and-wife duo Claudio and Adria Tennor Blotta first found success with the nearby Barbrix, and their sophmore effort carries some of Barbrix's charm along with it. Those standard Edison bulbs are here—as is Barbrix's chef Don Dickman—but so is phenomenal service and a neighborhood feel that often takes months, even years, to achieve.

All'Acqua's menu reads like a classic offering of Italian plates—there is antipasti and insalata, salumi and formaggi, primi and secondi and pizza. There is that ubiquitous mention of sharing, too, but small plates are not the focus here. In fact, it is entirely possible to get a bowl of pasta just for you (shocking, I know), and at a reasonable price at that. Some things are meant to be shared, though, like charred asparagus topped with a fried egg, breadcrumbs, speck and shavings of pecorino. A lot is going on in this dish, and I could have done without the fried egg and breadcrumbs, but the asparagus is cooked perfectly and the speck lends an indulgent nod without having to wrap everything in bacon.

I often struggle ordering cheese and charcuterie plates at restaurants, namely because the price is rarely justified by the tiny slice of cheese or meat that stares up at you from the board, daring you to consume $10 with a single nibble. But here, $7 for a single cheese is worth it. An order of the la tur—a creamy blend of cow, goat and sheep milk—arrives with plenty of crostini and, most importantly, a ramekin of stone fruit turned into compote, with sweet and sour notes battling it out to produce a spread that so expertly balances the cheese. "Chef gets all of his ingredients from the Atwater Village and Santa Monica farmers' markets," our server informed us, and I wasn't surprised: those cherries tasted like they had been plucked from a tree moments before. Cheese lovers, this is your spot; cheese and jam lovers—contain yourselves.

While there is branzino and lamb shank and pork chop on hand, you will most likely be coming here for the pizza and pasta. A strozzapreti is for fans of thick, stick-to-your-ribs pasta; topped with hearty chunks of lamb ragu, cumin and minted ricotta, it’s the kind of dish you want on one of those chilly LA nights we’ve been having, where heavy sweaters hide how full you’re starting to feel. Unfortunately, our dish turned lukewarm, then borderline cold, within minutes of landing on our table, and the flavors were masked by our confusion from the sudden temperature change. A cavolino pizza held its heat better, and boasts a dough that makes you want to eat a slice backwards, crust first. Delicate Brussels sprouts cover the top, along with mozzarella, garlic, smoked pancetta and pecorino romano. It’s surprisingly light, and while it could have used a little more oomph—more garlic, certainly, but also some more smokiness—we had no problems killing that pie.

“We’ve just added an item to the dessert menu,” our server, who seemed to appear and disappear at all the right moments throughout the night, told us, “and you’re probably going to want it.” She was right—a dense square of chocolate brioche bread pudding was exactly what we wanted, along with a scoop of roasted almond gelato melting slowly on the side. It was getting late and the restaurant was beginning to empty, but there seemed to be no rush: just the steady sound of plates being cleared and the murmur of Atwater residents in their new neighborhood haunt.

What to Drink: The bar is the first thing you see when walking into All'Acqua, a beautiful, glowing collection of bottles with an aesthetic remniscent of Scopa and Black Market Liquor Bar. Good thing it isn't all about appearance—the cocktails here are fantastic, like the Market Special ($12), which I wouldn't mind ordering every time I visit. Crater Lake red pepper vodka lends a spicy hand to the otherwise smooth drink, rounded out with persimmon, basil, house simple syrup and fresh lime—a veritable garden in a glass. My friend tried (and raved about) the Fair & Fowl ($10), another runaway hit featuring Eagle Rare bourbon, creme de peche, rosemary honey and lemon bitters. Bar manager Lucy Augusta Voigt cites her farm-to-table upbringing as an influence, and it's clear that the market ingredients used at All'Acqua aren't just relegated to the kitchen.

Where to Sit: Pick a spot, any spot—by the window, where you can watch Atwater denizens strolling by; at the bar, where Voigt works her magic (and where you can order the full menu); at a cozy, more private table in the back; or at the pizza bar, where chef Dickman throws dough with a balletic flair.