La Boucherie on 71’s aspirations are as lofty as its stunning views of the city, but need more grounding.

It’s not just the speedy elevator ride to the 71st floor of one of DTLA’s newest high-rises that’s likely to make your ears pop—once you receive the electronically backlit menu, you realize that the InterContinental hotel's La Boucherie on 71 is not a restaurant for the faint of wallet. The menu, which aims to combine French classics with traditional American steakhouse dishes, sets its sights high with stuffed frogs legs in herbed butter ($18), bouillabaisse ($24) and 42-day dry-aged rib-eye ($95), showing the elevated aspirations of both kitchen and accountants. Unfortunately, it’s only the latter who are likely to be seen as successful.

Pre-meal cocktails included a perfectly made martini and old-fashioned, arguably the best thing here—aside from the views. The strong bar program is joined by an impressive wine list, which leans heavily toward France and California, with some interesting choices from New World regions as well as Italy, Portugal and Spain.

An appetizer of seared duck foie gras with a caramelized green apple tatin ($28) presented an overcooked meat alongside blackberries, un-hulled strawberries, three blocks of stodgy brioche and a decent apple purée. The tatin comprised a strip of cold puff pastry topped with a micro sliver of blackened apple, while a companion starter of Ris de Veau ($24) offered little more, with dense sweetbreads missing that key combination of a crisp coating that breaks to reveal a creamy center. Worse were the accompanying spring peas, delivered with the mouthfeel of sucking on an 18th-century musket ball.

The meat at La Boucherie comes by way of the Newport Meat Co. and it’s obvious, from the first bite, that it’s of excellent quality. While the rib-eye could have benefitted from a touch more salt, it arrived perfectly medium-rare and provided the distilled beefy flavor one expects from dry-aged steak. The pork chop was less successful, and the dry double cut had to be returned to the kitchen. The replacement came out perfectly, but at $55 a pop, there should be no room for error in the first place. The same can be said of sides that cost upwards of $10 each, particularly the duck-fat fries, which tasted stale and appeared untouched by every table around us.

We shared one dessert of cheesecake and red wine sorbet ($18), which was pleasant enough. Service was amiable, if in need of occasional prodding. Our bill, including tax and gratuity, came to $418.02—high enough to make a return unlikely, unless there are reports of substantial improvement. That being said, the views and excellent drinks would make this the perfect spot to bookend a date, or take a meeting with an out of towner.

I’d be hard pressed to recommend anything from our meal, but if the execution can be stepped up, it’s great to see the reappearance of French classics such as Rognons de Veau and Tripes à la Mode de Caen on L.A. menus.

The primary reason for the existence of this restaurant is the stunning view in all directions across the city. If you can’t get a window table, you’ll be seated in the main body of the restaurant; given that La Boucherie’s design style has all the flair of an airport business lounge, this is not that appealing a prospect.

La Boucherie on 71's classic-leaning cocktails, or the wine: the Quinta do Vesuvio Pombal do Vesuvio 2014 partnered well with the meal and the wallet at $66 per bottle. 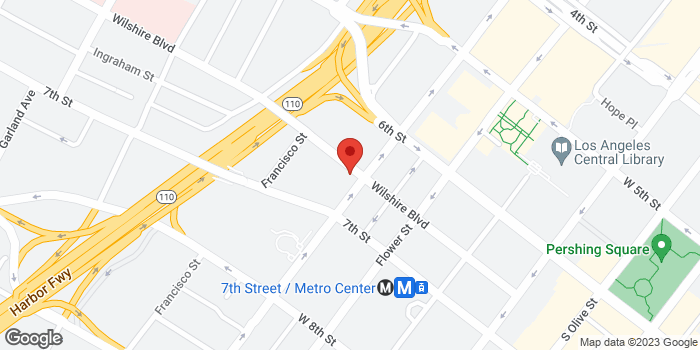