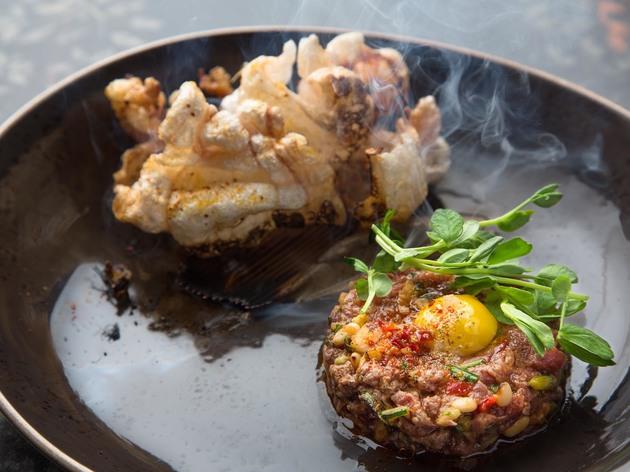 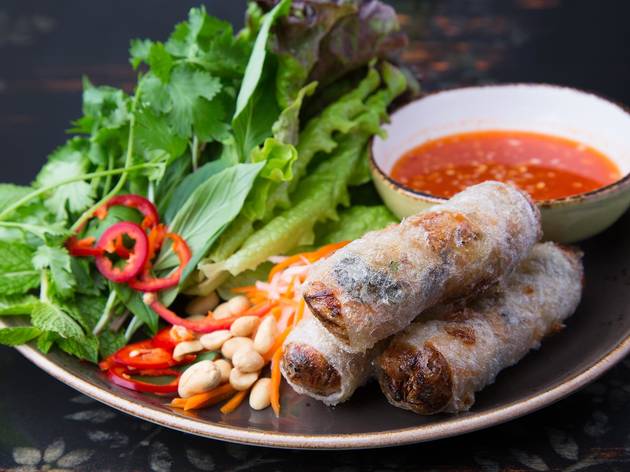 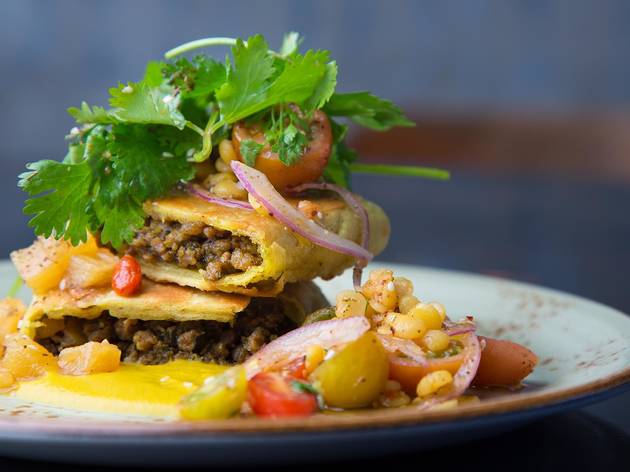 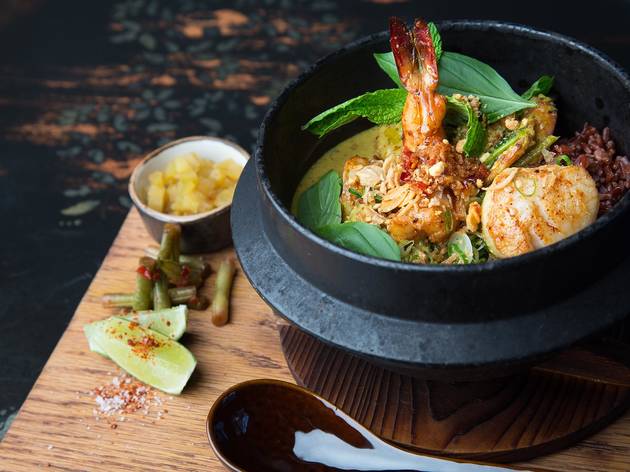 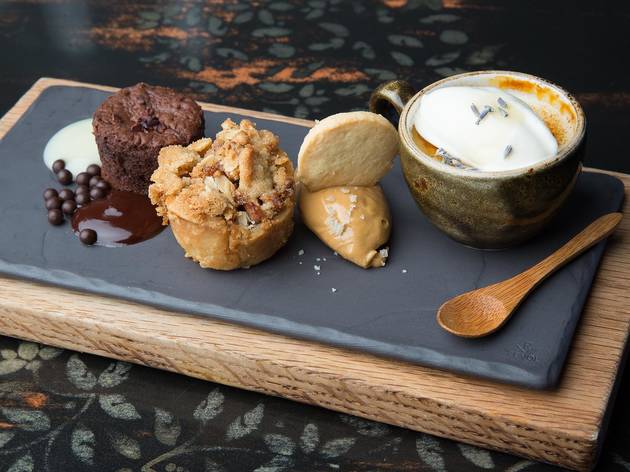 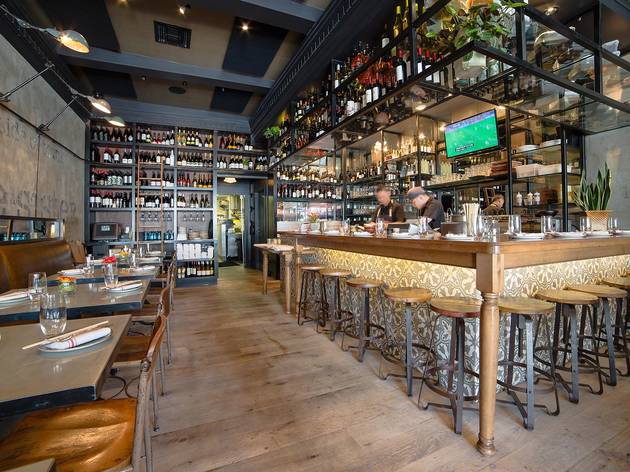 At Little Sister, Chef Tin Vuong's Southeast Asian-inspired restaurant in Manhattan Beach, stenciled butterflies spew out of a machine gun plastered on a splotchy gray wall, and paintings of grenades are mixed in with an "I'm planning a big surprise" quote. "It's an homage to the region's violent past with a peaceful look towards the future," said our server, when we asked what was up with all the ammo. A little contrived, maybe, but in the small space that is still packed to the brim a year after opening, it is clearly working. Vuong, who is originally from the San Gabriel Valley, is channeling the food of his youth into beautiful, creative dishes—some of the best I've had in the South Bay.

We smelled the beef tartare before we saw it, a dish still smoking from the burning piece of wood that our server gently rubbed around the bowl before placing it infront of us. In some cases this may be seen as theatrical, but it worked so well here. The earthy smell of the wood matched the tartare's rustic flair—sitting above the raw beef, a quail egg trembled, and bone marrow paste was smeared on the side. I would have felt like a (very satisfied) cavewoman if it weren't for the more refined cassava chips that we used to scoop everything up. Another phenomenal dish: the imperial rolls. The roll is a fried medley of shrimp, crab and pork, and while so often this combination creates a heavy, greasy bite, Little Sister's version is more crisp and nuanced. To assemble, place a roll in a lettuce leaf, top with pickled carrots, peanuts and peppers, and dunk in the chili lime sauce that arrives on the side. It is indulgent, yes, but so worth it.

While Chef Vuong's dishes lean towards Vietnam, the kima platha has a definitive Burmese background. Flatbread is filled with minced chili lamb, and the large portion size was much appreciated since everyone at the table wanted more. There is a light salad with peanuts (more peanuts!) and cherry tomatoes on one side, and a pool of sweet coconut curry lentil dipping sauce on the other. Less popular was the Saigon lemongrass beef noodles—a tasty dish, but one that didn't seem to inspire much more than a "This is pretty good." The plate held a bed of lettuce with vermicelli noodles, chunks of spicy beef and a ramekin of sweet chili-lime sauce—a dish seen in joints across the city, albeit always a solid option.

The noodles may not have blown us away, but I can't get over the pot of scallops, quick fried and tossed with shrimp in a shallow pool of Malaysian curry. Spoon over red cargo rice and top with a chutney relish, then wait for the flavors to hit you one at a time: the salty meat of each tender scallop, the thick sweetness of the curry, the crunch of long beans, the grainy rice that holds onto every spice and herb and tangle of water spinach. I want to try everything on the menu here, but it will be hard to visit Little Sister again without ordering the scallops over and over. At least trying new desserts will be easier: from a list of nine to ten pastries, diners choose three for $10. The fallen chocolate soufflé and lavender crème brûlee are stellar picks. The caramel apple mini pie was a tad too dry, but that just means I'll have to come back to try the lemongrass coconut panna cotta. Oh, twist my arm, why don't you.

What to Drink: Little Sister has a fine selection of beer, wine and sake, although there is a far greater emphasis placed on the food. The Bavik ($8) is a good option if you're into lagers, and would pair well with the meal we had; my 2012 Borgo Conventi Pinot Grigio ($11) was a light, crisp accompaniment as well.

Where to Sit: Despite having opened a year ago, reservations are still hard to come by. The earliest we could get a week in advance was a 9:45pm slot; hoping for the best, we showed up at 8pm. Luckily, there were a few spots left at the communal table situated in the center of Little Sister's small dining area. It is not an ideal spot, especially when you have to squeeze past diners mid-bite to get to your seat. The moral of the story: make your reservations now (right now!) and request a seat by the window. You know, for all the pretty, Manhattan-Beach-people watching.