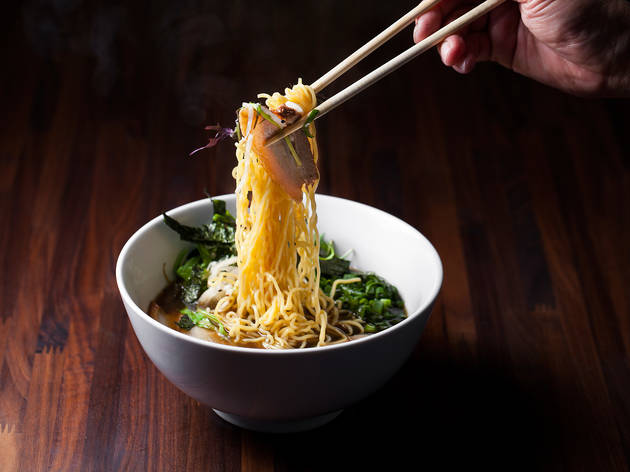 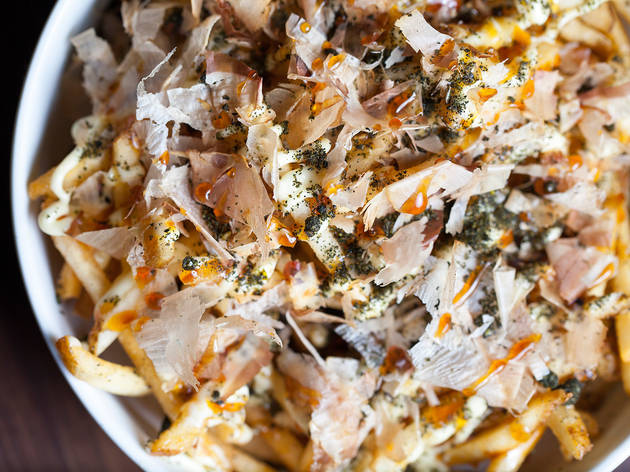 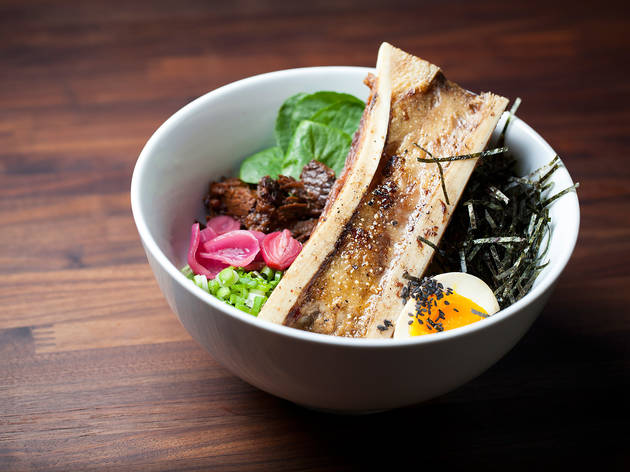 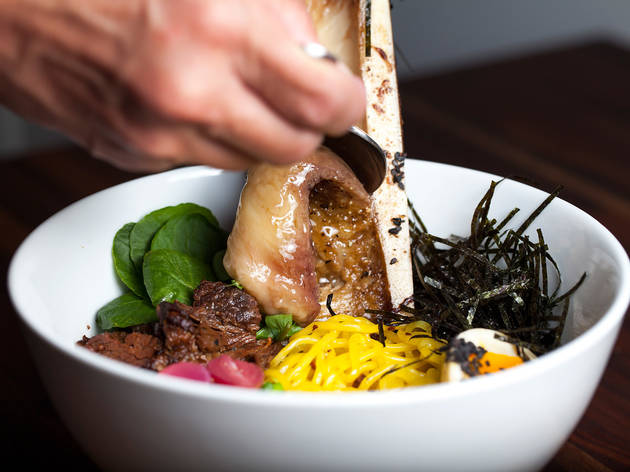 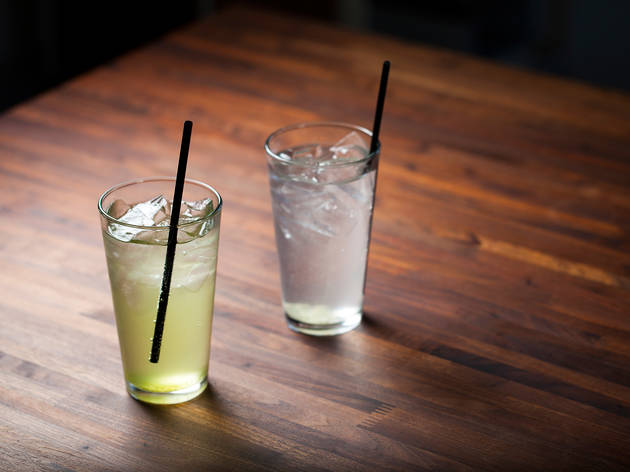 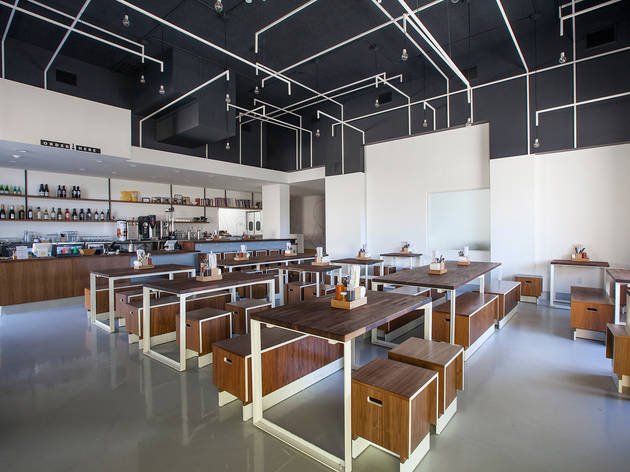 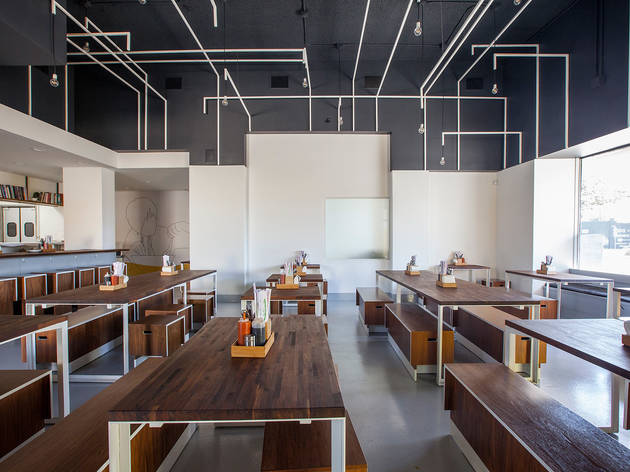 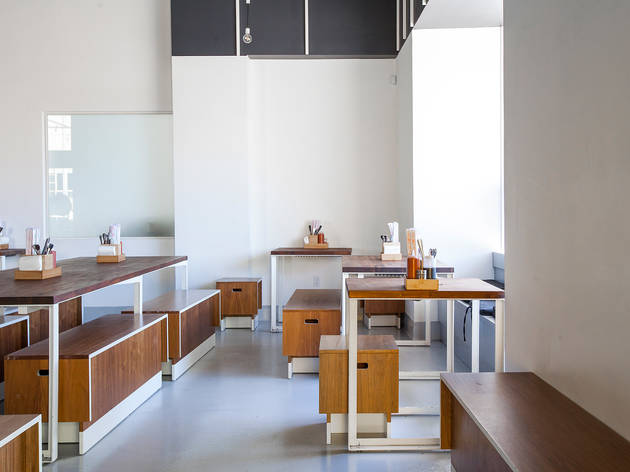 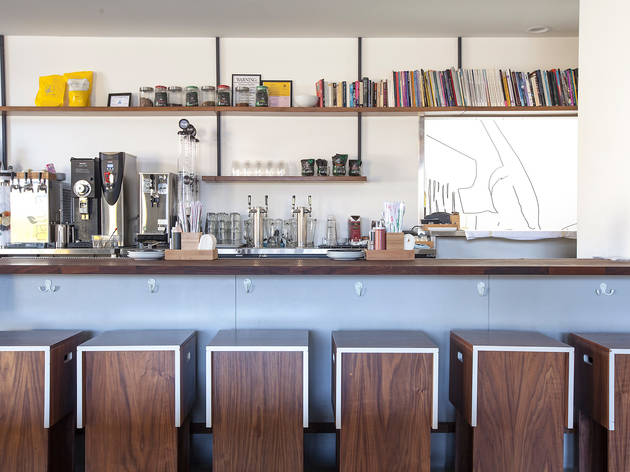 At Ozu East Kitchen in Atwater Village, the bone marrow noodles and Ozu-style fries are a luxurious, rib-sticking treat. Just don't get too comfortable.

There’s a lot to be said about the simplicity of Ozu East Kitchen’s space, its cafeteria-esque seating, minimalist decor and counter ordering. For one, the Atwater Village eatery doesn’t try to be something it's not. There is no "walking you through the menu" or an emphasis on seasonal ingredients—at least, diners are certainly not given a spiel about it. Ozu is a family restaurant, or a place to come have a quick meal with friends—and when the bone marrow noodles you ordered end up being exceptionally good, well, that's just a plus.

Like Ozu’s seating arrangements, the food here is designed for communal purposes. Fingers reach for sesame fries done “ozu style,” drenched in an addicting mess of sesame oil, wakame, yuzu mayo and ketchup. A spicy tuna omusubi wrapped in nori and sprinkled with togarashi is less playful—and, while were at it, not as good—but all is forgiven with those bone marrow noodles. A giant bone divides the bowl into two: brisket on one side; watercress, onions and an ajitama egg on the other; thick noodles hidden underneath. Combined with a small scoop of marrow, the dish is a rich flavor bomb and arguably the best thing on the menu.

Ozu’s main focus, though, is ramen, of which there are a few kinds: chilled corn ramen, pork, miso or chicken ramen, all with their own profiles—some sprinkled with turmeric and dill, others with cilantro and mizuna.  A restaurant’s true ramen prowess is usually judged by its pork variation, and at that, Ozu passes with flying colors. Thick cuts of pork belly float alongside peppery mizuna and another expertly cooked egg, and while the broth is certainly rich from the aforementioned ingredients seeping into it, it’s also neither too thick or too fatty. It’s a bowl of ramen that won’t leave you feeling guilty afterwards—a plus, since you’ll want to save room for a creamy scoop of matcha green tea gelato. Then get out of there—those backless benches were not made for lingering.

What to Drink: Ozu East Kitchen offers wine (mostly from France and Spain), beer (a small selection of Japanese beer, along with Pasadena’s Craftsman), sake and soju. You can also take a gander at Ozu’s handcrafted sodas, which come in flavors like “yuzu ginger” and “strawberry cucumber.” They’re creative but not necessarily groundbreaking, mainly serving as a fun alternative to your standard soda selection.

Where to Sit: Most people will sit at one of the long narrow benches that fill the space; some large enough to be considered communal, others more for small groups. The benches are backless and can get a little uncomfortable, but this is also not a restaurant meant for hanging around for too long. There’s a short bar counter, too, if you’re rolling solo or with one other friend.