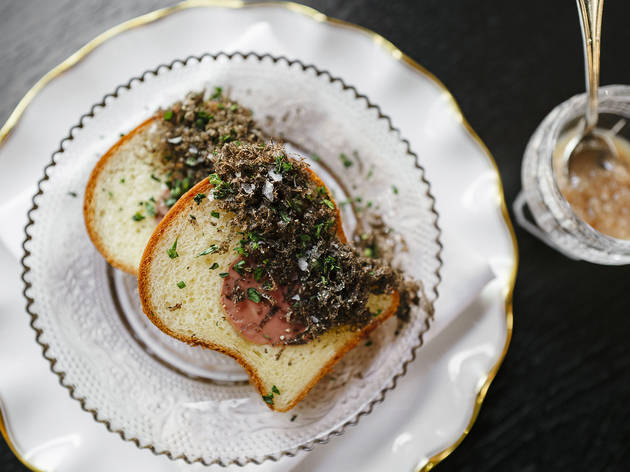 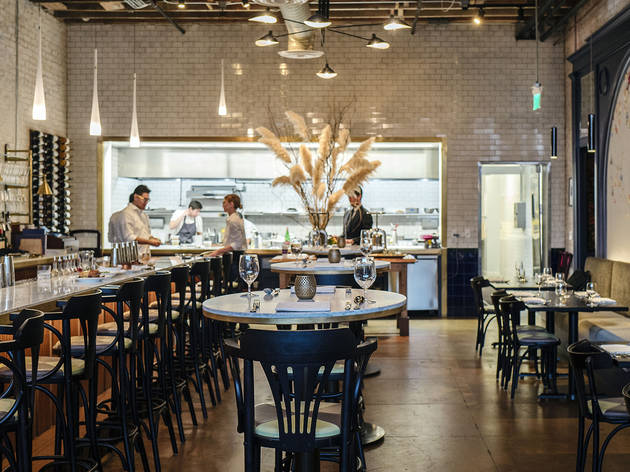 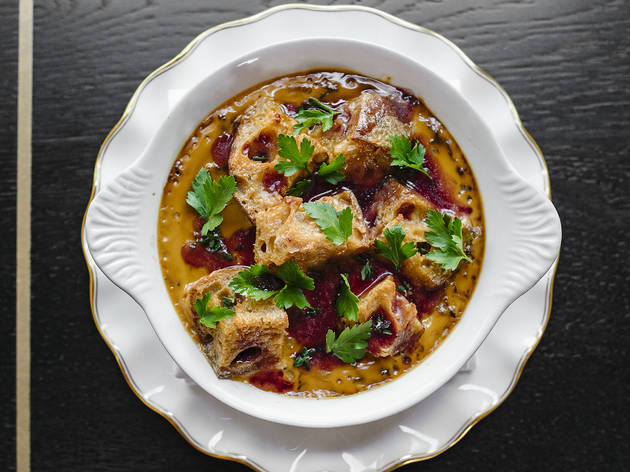 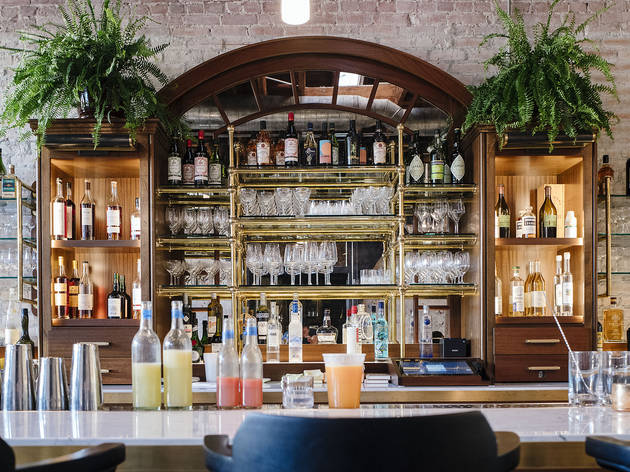 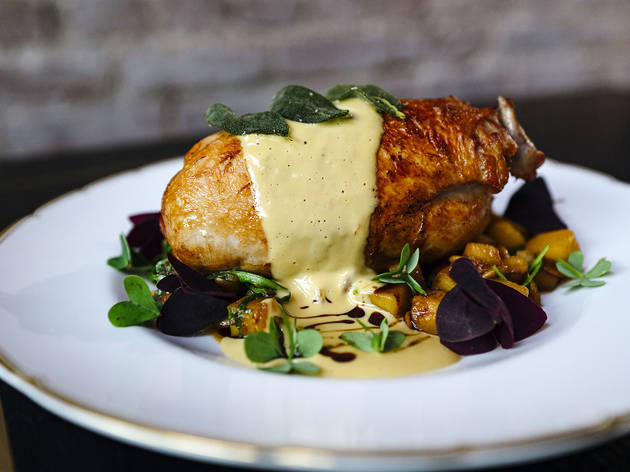 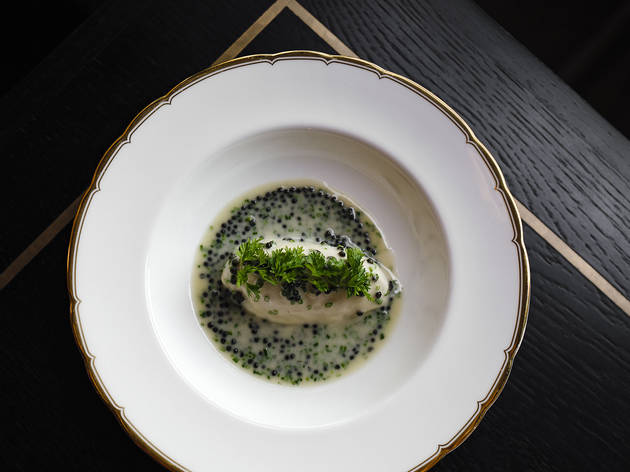 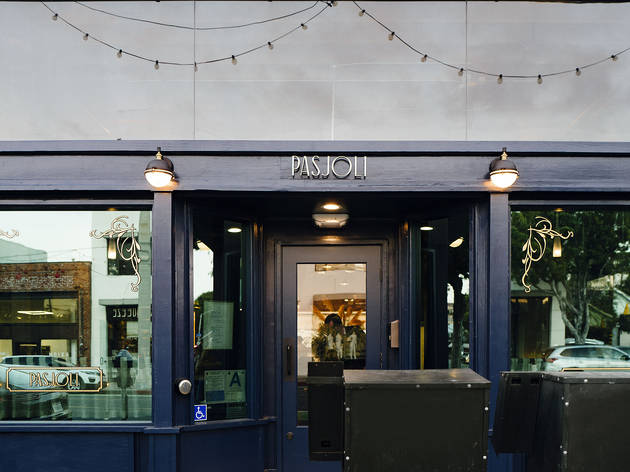 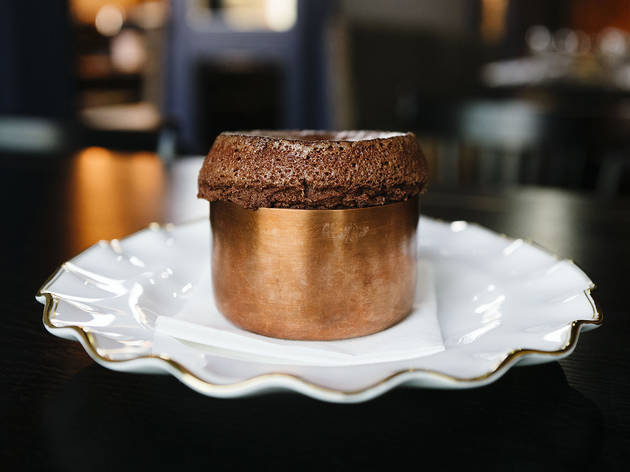 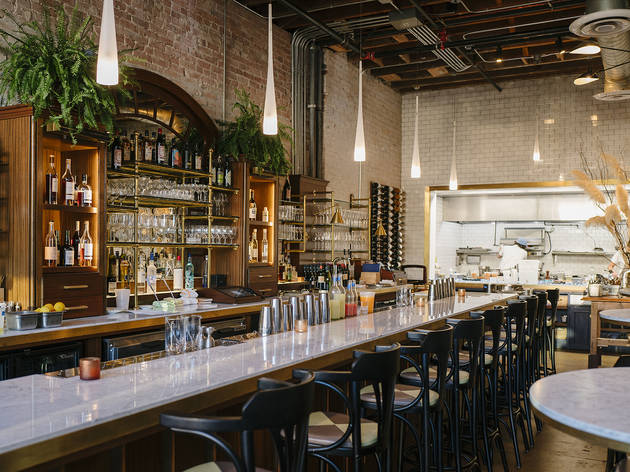 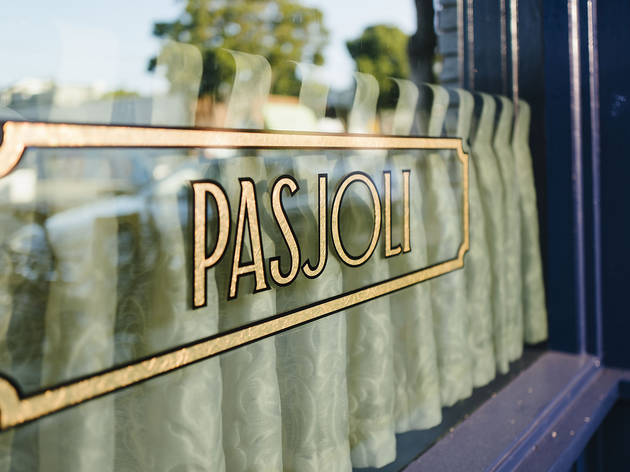 Given chef David Beran’s first L.A. outlet, the Michelin-starred Dialogue, I was expecting great things from his new Gallic-inspired restaurant, Pasjoli—and I’m delighted to say that, as proved through several increasingly excellent meals, Pasjoli does not disappoint.

That’s not to say it doesn’t have its issues. There’s décor that I find slightly unappealing, a wine list that might be considered a lip curl at anyone looking for easy access, and a high ticket price—not to mention formality in an increasingly casual dining scene.

Yet Pasjoli is one of my favorite new restaurants, in part because of my own predilection for old-school, technique-driven dining, but primarily because, when it comes to the food, the chefs have yet to serve a single bite that doesn’t make me smile.

Reading the menu may well require you to brush up on schoolhouse French, or to nose through the pages of Escoffier’s Ma Cuisine for reference, but any doubts about the viability of such a menu classique disappear as soon as the quenelle with scallop, caviar and beurre blanc ($36) arrives. It’s a textbook version of the soft dumpling, here made with scallops rather than pike. The creamy texture of the seafood against the richness of the butter and saltiness of the fish eggs is an indication that Beran is completely unapologetic about his desire to bring elegant French cuisine back to the forefront.

The same is true with the canard Bordelaise ($25), where shreds of confit duck nestle under a rich topping of sour preserved cherries, bone marrow and crisp chunks of country bread. Vegetable-forward dishes also get a spotlight: The thon et tomate ($26) and crabe et chou-fleur ($26) were as much about the heirloom tomatoes and perfectly velvet cauliflower sauce, respectively, as they were about the marinated tuna and the plentiful flakes of blue crab.

Favorite main courses were the carré du porc ($49), which presented a sizeable medium-cooked chop of milk-fed pork, sourced from upstate New York, placed on a layer of lentils that retained a bite and had been given a gentle coating of sweet cippolini onions. My own top choice was a poussin farci ($47) that arrived as a perfect cylinder of poultry stuffed with forcemeat and served with a flawless blanquette de Volaille.

The star dish here is, of course, the canard à la Rouennaise à la presse ($165 for two guests), which, at its pass-the-smelling-salts price and its reservation-only policy, will probably be a one-and-done experience for most. Watching the tableside preparation of carving the duck breasts from the crown and then squeezing the remaining bones in the large antique press is fun, and Escoffier would nod approvingly. The result of duck cooked to perfect pink served in a blood-thickened sauce is a taste that will be an enjoyable first to many.

Following all that indulgence, the list of desserts is suitably short. But the chocolate soufflé ($22) rises to the occasion, and the passion fruit’s simple citric acidity in the tarte au fruit de la passion ($18) is even better for a potentially blown-out palate.

For a city that’s prided itself on casual dining, the notion of offering a significantly more formal, undoubtedly high-ticket meal (dinner here—sans duck—with a decent bottle of wine will see you handing over $300), and one based on a showy cuisine style that time forgot could be seen as a brave, perhaps foolish, decision. But I think if anyone in Los Angeles has the côtelettes to pull it off, it’s going to be David Beran.

I found the décor of Pasjoli slightly confusing: From floor to ceiling, the restaurant is elegant but brightly lit and cries out for some shade. Once the decoration hits ceiling level, it breaks out into full Cali-loft mode with shiny pipes and bare wood, all of which gives the impression that they ran out of money halfway up. The tables that are in sight of the open kitchen are always my first choice, but the high two-tops would be perfect for a walk-in supper, and there’s also seating at the rather austere bar.

This is not something that I say very often about any restaurant, but I simply have not had a bad bite of food during a plethora of visits to Pasjoli, and could quite easily eat anything on the menu and be perfectly sated. Start with the thon et tomate or the crabe et chou-fleur and follow that with the scallop quenelle. If you’re feeling indulgent, the foie de poulet à la Strasbourgeoise (brioche stuffed with chicken liver and topped with shaved truffles) has been classified by my wife and I with the technical definition of “stupidly good.”

The poussin farci is an exemplary version of this bistro staple, while the tableside showstopper of the canard à la Rouennaise à la presse, is definitely worth trying once. Don’t let its cost dissuade you from trying the other main courses. Finish with the tarte au fruit de la passion and a strong digestif.

The wine list is based on a French foundation, and even given the fact that gratuity is already added to the bill determinedly, it’s not for the weak of wallet. This is particularly true with the list of red wines; our terrific Domaine du Grand Bourjassot Gigondas was twice the retail cost, at $90. The cocktails at Pasjoli are very much on-point, with both a boulevardier ($18) and a martini made with pleasingly blue-tinged Magellan Gin ($19) being well received, although the prices again make you feel like you’ve been thrown to the ground in a side alley and kicked.

For those of you guarding your liver, I rather liked their Provençal lemonade ($7) and the sparkling cider from Normandy ($14).