"Is this the future of dining?"

That was the first thing I asked myself when I visited Playa Provisions on a warm, fall night in Playa del Rey. Helmed by Top Chef alumn Brooke Williamson and husband Nick Roberts (The Tripel, Hudson House), Playa Provisions channels the country mart and food hall aesthetic that Farmshop and (on a larger scale) the more recent Anaheim Packing District have so successfully executed, a sort of "choose your own adventure" experience. At Playa, which houses four separate concepts, you can have breakfast or lunch at King Beach, eat dinner at Dockside, buy a scoop (or three) of ice cream at Small Batch, and sip on a bourbon cocktail at Grain, the dimly lit whiskey bar at the end of a long hall. But you can also order off the Dockside menu at Grain, have coconut ice cream from Small Batch in a dessert served in the main dining room, and sip on beer or wine at Small Batch. Each space is intertwined and communal, exuding a small town feel that is already native to Playa del Rey.

If there is one issue to be had, it is a big one—the food is inconsistent (and, regrettably, often oversalted). I couldn't wait to try the lobster roll, but found myself disappointed by how far more emphasis was placed on the buttered-up brioche bun than the bland lobster meat. A pile of pickled mustard seeds and, curiously, crushed potato chips gives the roll some great texture, but it wasn't enough to keep me from lamenting the lack of good lobster rolls in LA. We had greater success with our other seafood dishes—a Dungeness crab mac and cheese provides everything you're craving when you order mac and cheese (Comfort. Heartiness. Calories.), and the crab is not lost under all that cheese. The scallops here are tender (albeit a bit too salty), but the star on this plate is the fried cornbread pudding; sweet and flaky, they provided my favorite bites of the entire meal. I don't know what that says—that squares of cornbread meant as a vessel to showcase the scallops trumped everything else—but I could eat an entire plate of that cornbread.

There is some inventive garnishing happening here aside from those potato chip crumbles—a plate of charred brocollini, for example, is topped with small rice cake discs drizzled with chili vinaigrette. It's not entirely necessary (the brocollini tastes great on its own) but it's an interesting touch, and a playful one. More straightforward is the short rib, crusted with horseradish and more of those mustard seeds. The meat is delicate and satisfying, and the barley it sits on is even better, yet another side that seems to outshine the central part of the dish.

For dessert, skip the hula pie (for coconut lovers who get excited at the mere mention of the fruit, there is not enough tropical flavor in this ice cream pie to warrant using "hula" in the name) and head to Small Batch for some ice cream. You can enjoy a cone at one of the picnic tables used for King Beach's breakfast and lunch service or, afterwards, head to Grain for a nightcap. It's all up to you—because, apparently, that's how we dine now.

What to Drink: Whiskey fans can start their night at Grain, where the cocktail menu features a healthy mix of bourbon, rye and scotch. The Whiskey Smash ($12) appeals to those with a sweet tooth; simple syrup, lemon and mint round out the bourbon poured over a mound of crushed ice. There are classics as well—a solid Old Fashioned ($12) and a Ginger Highball ($10) were popular on a recent night. At Dockside, some of these drinks make the cocktail list, but there are also libations featuring gin, vodka, mezcal and rum.

Where to Sit: Oh, the options you have at Playa. There is patio seating, a prime spot to watch the sun set over the Pacific. There are tables and booths in the main dining area, picnic tables in a small alcove off a narrow hallway, and you can even order the full Dockside menu while sitting at Grain's bar. Just know this: there is little that beats eating scallops while watching the sun set.

Conversation piece: This is the third project from Williamson and Roberts, but they're sticking close to home. Their first, Hudson House, is in Redondo Beach, while their second restaurant, The Tripel, is right down the street from Playa Provisions. 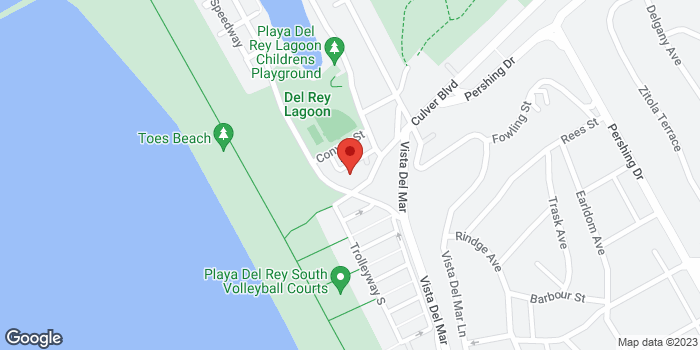