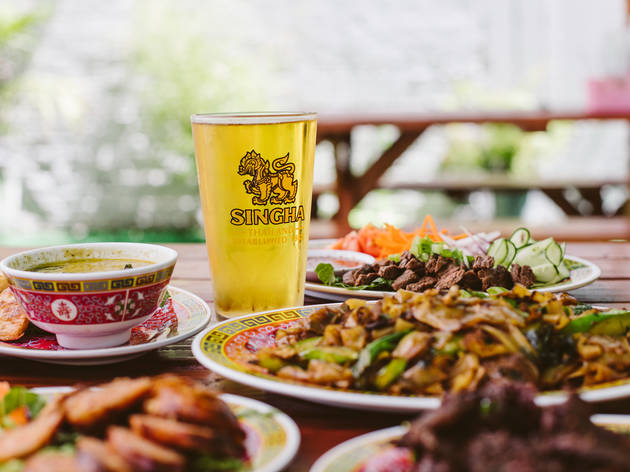 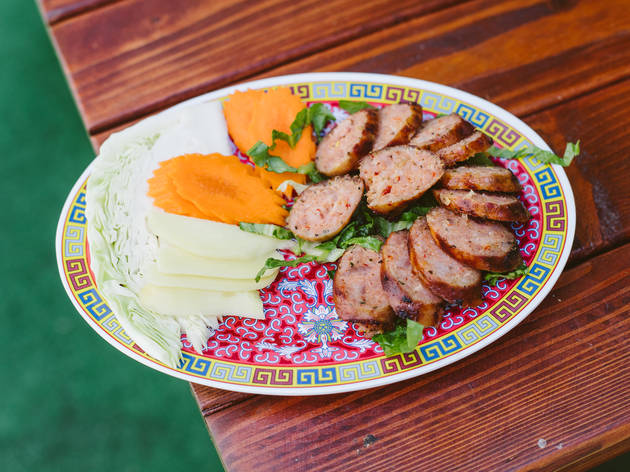 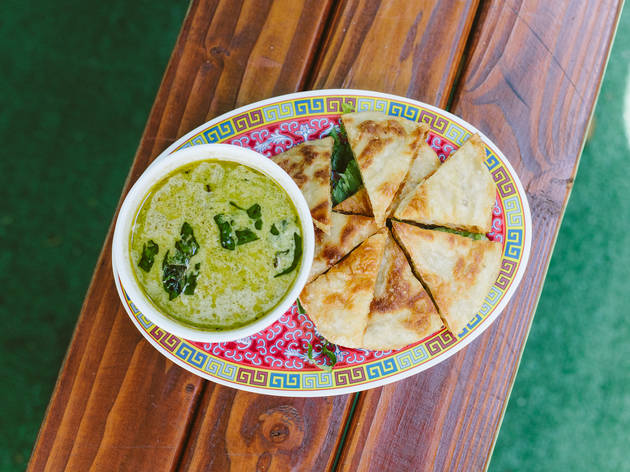 3/17
Photograph: Rozette RagoGreen curry with roti at So Long, Hi 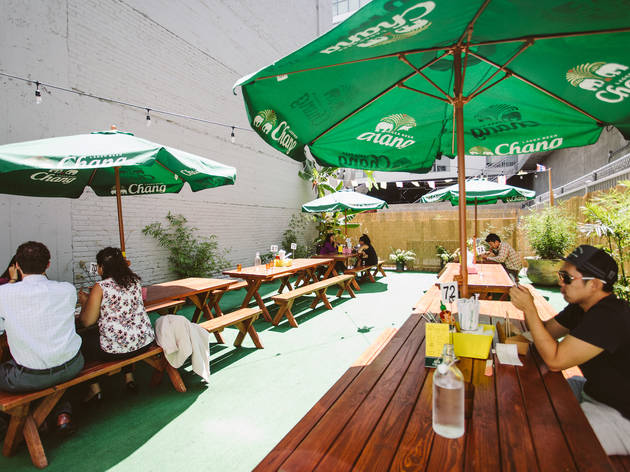 4/17
Photograph: Rozette RagoIf you've got the time, So Long, Hi's patio is a great place to perch 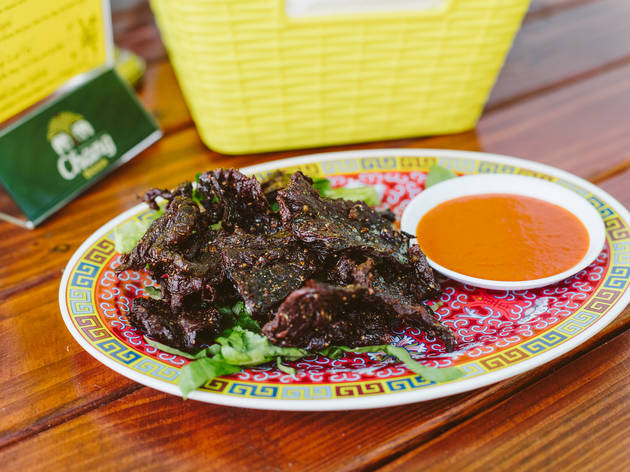 5/17
Photograph: Rozette RagoThai jerky at So Long, Hi, available in beef or pork 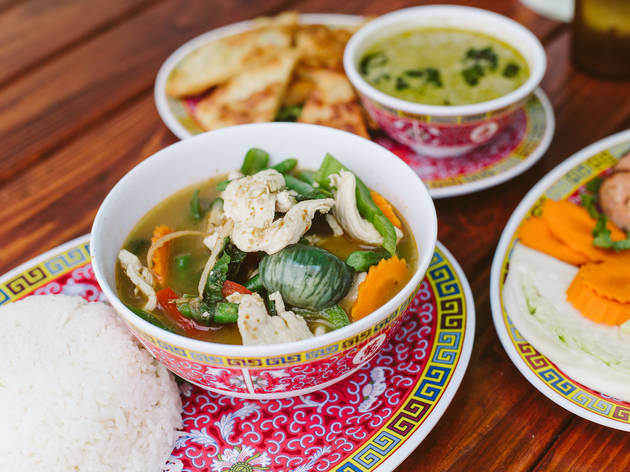 6/17
Photograph: Rozette RagoSo Long, Hi's jungle curry is a frequent special&mdash;and one you may want to order with frequency 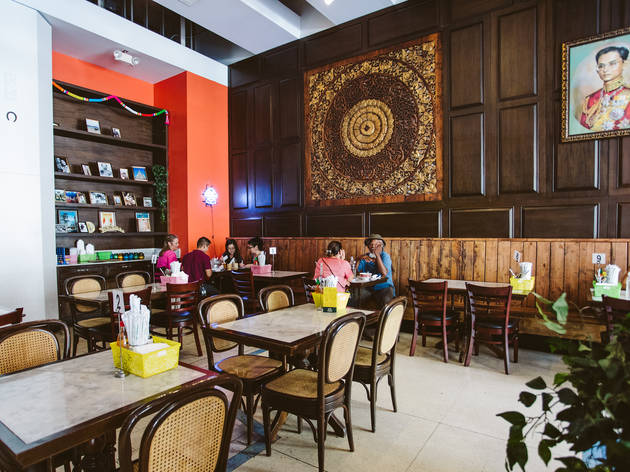 7/17
Photograph: Rozette RagoThe dining room of So Long, Hi is colorful and comfy 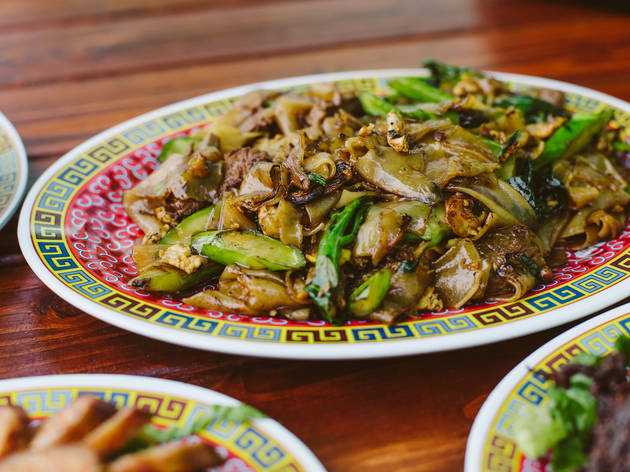 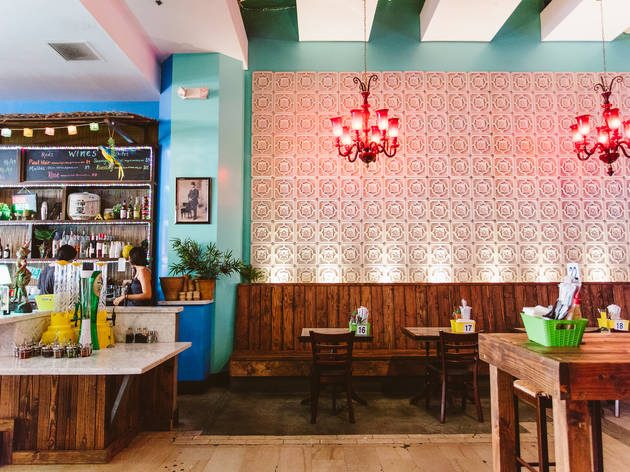 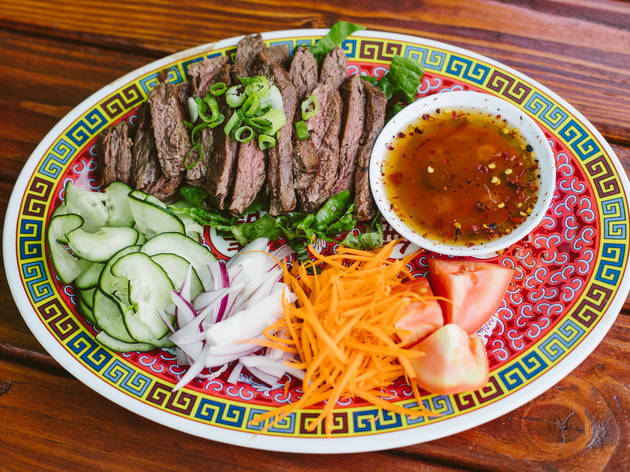 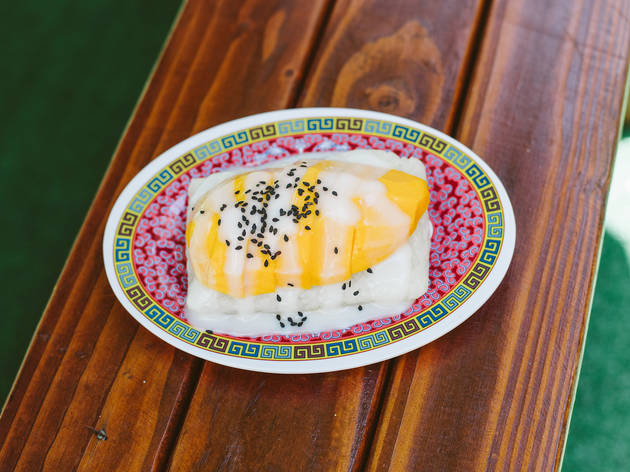 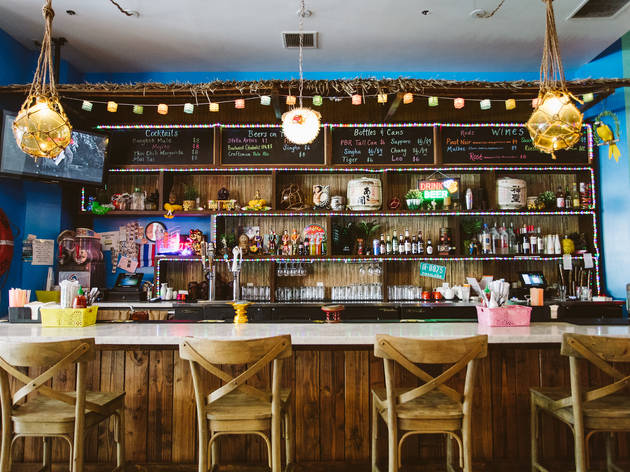 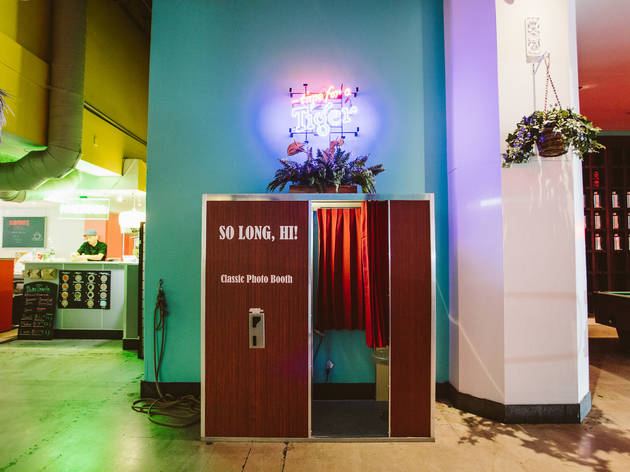 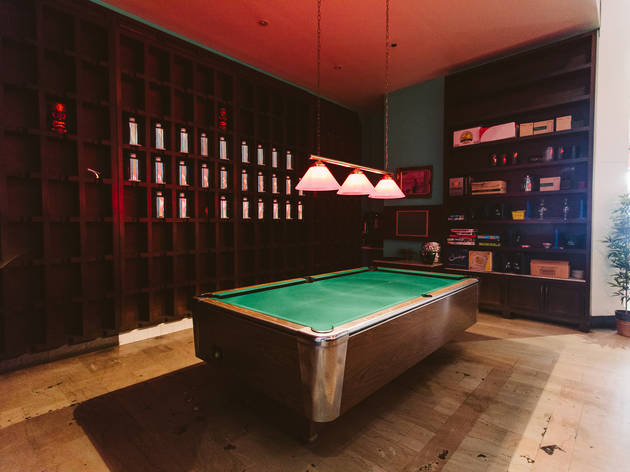 14/17
Photograph: Rozette RagoSo Long, Hi's pool room offers an array of fun, from the pool table to the shelves full of board games 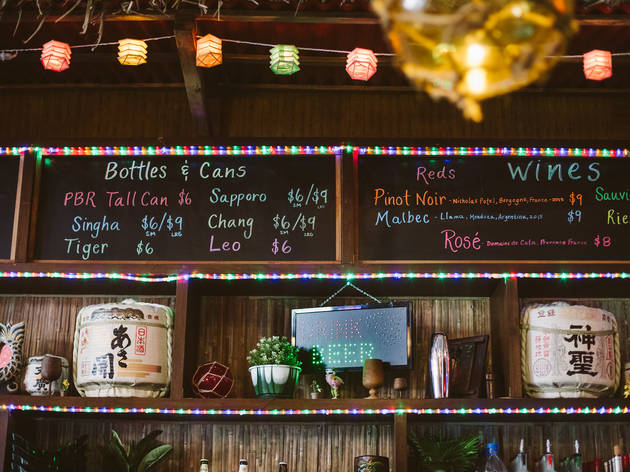 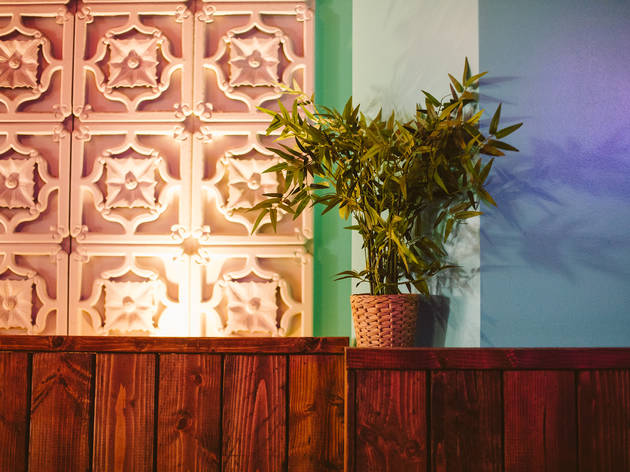 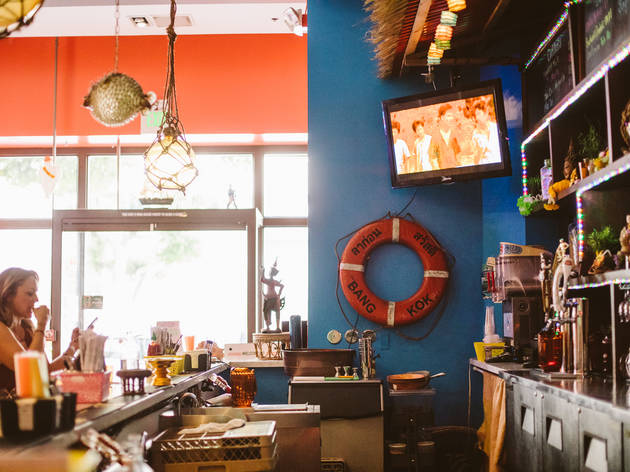 So Long, Hi is Downtown’s destination for fun, if not Thai food

It’s a balmy day and you’re surrounded by Singha umbrellas, bamboo and leisure-minded patrons sipping cool beer and dabbing the sweat from your brows. Whether it’s caused by the summer heat or the curry, you can’t be sure, but you certainly don’t mind now that you’re spending your afternoon or evening at So Long, Hi. No, you’re not in the tropics—you’re in Downtown L.A.’s affordable, approachable, laid-back Thai restaurant from Sticky Rice’s David Tewasart and White Guy Pad Thai’s Bryan Sharafkhah-Sharp.

Its leisurely atmosphere extends to nearly every aspect of the restaurant: this is not the place for a quick, in-and-out dining experience—for Downtown’s busy business crowd, pickup and delivery here is the definite ticket—and the slow, casual service may in fact be the biggest aberration in So Long, Hi’s whole deal. But it’s also at the heart of the restaurant’s ethos.

The neon menus, Christmas lights, the photo booth, the shelves of board games, the pool table: everything about So Long, Hi screams “come on in and stay awhile,” that is, when it’s not screaming “FUN.” It’s especially true on the back patio, an astro-turf oasis in the middle of Downtown’s concrete jungle, and one where umbrellas and bulb lights and picnic tables beckon diners to lose track of entire evenings over reasonably priced Thai street food and accessible classics.

The move here is the happy hour, where nearly all appetizers—which happen to be some of the strongest items So Long, Hi has on offer—will only set you back $5. The Thai sausage is a shining example of sai krok isan, its grilled exterior slightly caramelized and each slice a perfectly sour morsel of spice-studded pork. The Thai jerky, another table-pleasing app, marinates thin slices of pork or beef and seasons them delicately, so that the natural flavor of the meat isn’t overwhelmed; tougher than your average store-bought jerky but even more enjoyable, it’s a snack that could probably succeed if sold for retail. The entrées can be inconsistent—pad see ew perfectly seasoned one visit, over-salted another—and the jungle curry, a frequent daily special, arrives with searing spiciness one order, and lacking bite on another. To be fair, when they’re on, they’re on, and the coconut-milk-less jungle curry is one of the most unique and invigorating items on the menu; it should absolutely be sampled, especially by those who don’t mind a game of spice roulette. Other curry dishes are the usual suspects—green, yellow, red, khao soi—as are those on the stir-fry section: pad Thai, pad kee mao, pad siew, Thai fried rice.

Though the cocktail menu feels and tastes a little flat, it’s all reasonably priced, proffering soju-spiked Thai iced tea and prik glua-rimmed Thai chili margaritas for around $8 apiece. The mixology here isn’t of the same caliber you’ll find at neighboring Downtown establishments, but they’re fun, neon straws and all. A better call is anything from the selection of Asian beer on offer, which can be ordered on draft, by the bottle or even fizzing up to the top of a communal beer tower for the whole table.

What to eat: Must-eats include the Thai sausage, the jungle curry—when on special—and the Thai jerky. For a classic reinvented as fun finger food, go for the green curry with roti, which provides flaky triangles of fried dough for dipping into a Thai stalwart.

What to drink: The cocktail list is brief, a quick-hit list of mai tai, mule, margarita and mojito, with the recent addition of a spiked Thai iced tea, but for a crisp and consistent supplement to your meal, go for the beer.

Where to sit: So Long Hi’s patio is a gem, though service here tends to lag. Opt for the patio when you’ve got the time, but indoors, you’ll find speedier service—and you’ll be closer to the fun and games, not to mention the weekly live music in the evenings.