If we had a dollar for every time someone lamented the lack of quality falafel in LA, well, we’d open our own falafel stand. In an otherwise culturally varied culinary scene—Armenian bakeries? Plenty of ‘em. Mexican food? Nailed it.—really good falafel can be hard to find. It's a special tragedy for the vegetarians among us. So we took it upon ourselves to do some research (life is so hard, we know), and tracked down where to find the city’s best balls. Of falafel. Get your mind out of the gutter, guys.

Where to find LA's best falafel 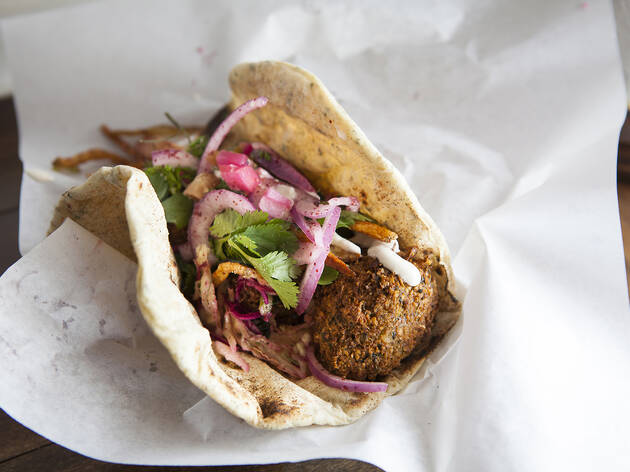 The whole city seemed to collectively freak out with the arrival of Dune, a small falafel joint from Scott Zwiezen of Elf Cafe. The Atwater Village eatery still draws a consistent crowd, with a line that quickly spills out the door and hungry diners hovering over the few places to sit. And yet, it's totally worth the wait. Dune's menu is small; sandwiches include falafel wrapped in house flatbread, lamb with lemon turmeric yogurt, and pickled beets and feta on ciabatta, all around $8-$10 and all made with unbelievably fresh ingredients. There are plates available with hummus, and sides that include tabbouleh. To drink, a killer kombucha fizzles with fragrant rosewater notes. Oh, and the falafel? Crisp on the outside, warm and fluffy on the inside, and yup, it's pretty much perfection. 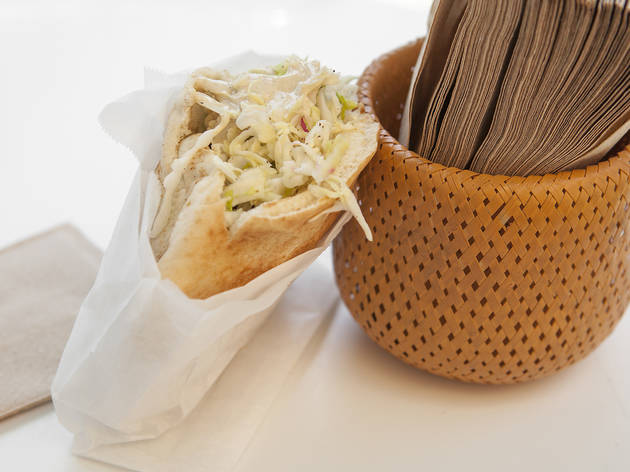 It’s easy to miss this hole-in-the-wall falafel counter in West Hollywood, but trust your GPS because these cats are serious about their fried balls. Fala Bar’s 100 percent vegan menu shows off the full potential of the powerful chickpea, with five different types of falafel—from the crunchy and savory original to more adventurous flavors like sweet potato and kale. The Fala sandwich ($8) is served as falafel, hummus, Israeli salad, cabbage and tahini stuffed in a soft pita. As far as ingredients go, Fala Bar is kosher, but sticklers should know that they’re open on shabbat. 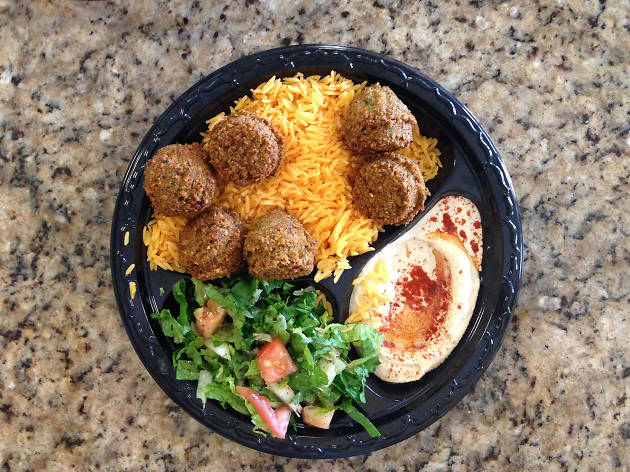 As with most reputable eateries in the Valley, Joe’s Falafel can be found in a small Studio City strip mall, where the scent of cumin and coriander is heavy in the air. Follow your nose. A dozen tables are scattered about, along with a row of chairs at the kitchen counter and a blackboard describing the daily specials that dangles above the cashier. Most customers don’t come for the specials, though—they come for the falafel, available on a plate ($8.95) or a pita sandwich ($5.50). An expertly fried exterior breaks open to reveal a well seasoned mash of chickpeas; get the plate and you’ll be rewarded with six pieces of falafel, rice, salad and hummus, alongside a warm pita. If you really want to treat yourself, order the freshly made laffa to accompany your meal. Plates are large—enough, sometimes, to split with a friend—but they’re also meant to be enjoyed at a leisurely pace, under ceiling fans that spin lazily against the Valley heat. 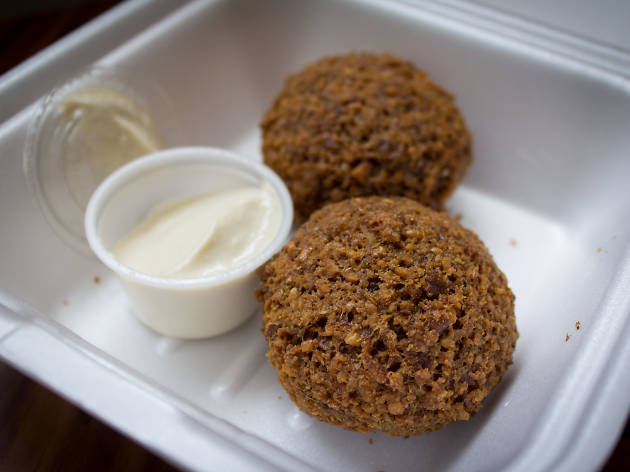 No matter what your feelings are about waiting in line, there’s a methodical beauty to the near-constant queue at Mediterranean Cafe. Step up to the counter, place your order, fork over a few dollars, and before you even have your change back, there’s a blue tray with your lunch waiting on the counter. As consistent as the service is, the food is even better. Though the shawarma plate ($9) mainly keeps the lunch break crowds coming, the falafel ($1.75) is an essential add-on: two pieces the size of a large macaron, crisp on the outside and like a light cake on the inside. The spiced sides are good enough to devour as is, but you’ll find yourself scraping every last drop out of the small cup of tahini—and if two pieces don't cut it, you can splurge on a falafel plate ($6.75) or a wrap ($4.50). 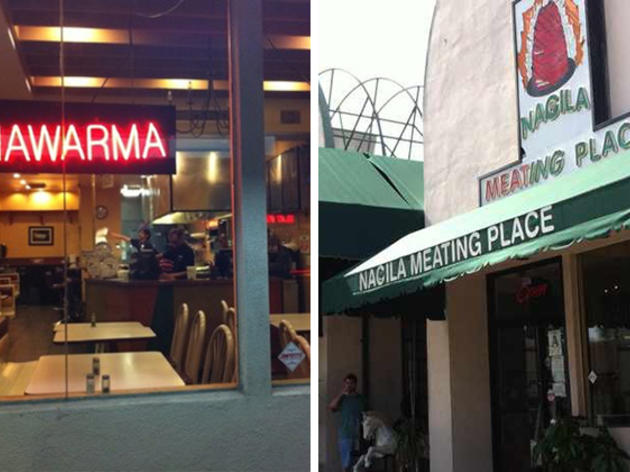 This Kehila Kosher (meaning two separate kitchens for milk and meat products) restaurant on Pico has been a neighborhood staple since day one. The restaurant is split into two sections: one side serves milk products (like their famous pizza, sold by the slice or whole), while the other is known as the Meating Place, where the menu boasts shawarma and other meat-centric dishes. Order the falafel at the Meating Place (entrance is on the right when you enter), which comes with either a pita accompanied by salad and tahini ($6.95), or wrapped in laffa bread with Israeli salad, hummus, fries and tahini ($9.45)—we prefer the latter. Full disclosure: come hungry, as this hearty (and massive) laffa sandwich includes at least three deep-fried falafel balls, and is wrapped up with all the traditional fixings—including fries. 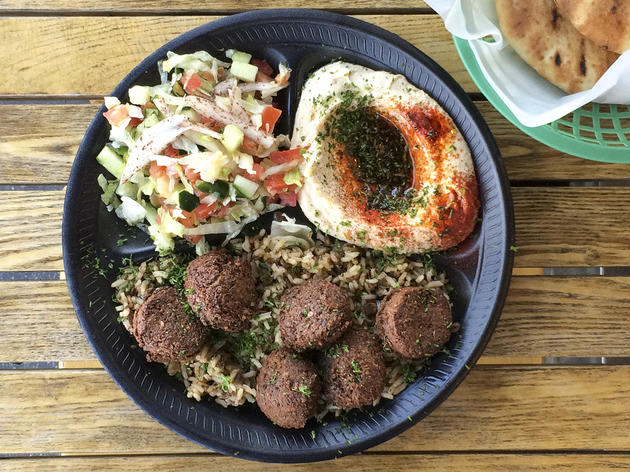 Pita Bar & Grill (or PB&G as we like to call it) probably has the best shawarma in Los Angeles, but their kickass falafel is also not to be missed. Each flavorful ball is perfectly crispy on the outside, with the slightest bit of heat on the inside. Dip those suckers in hummus with olive oil or one of their many house-made condiments like tahini, harissa or amba (a delectable pickled mango sauce) for the full experience. The plate is on the steep side—it'll run you $10—but it packs a solid portion of falafel, rice, Israeli salad, hummus and warm pita. Top it all off with a watermelon agua fresca ($2.50) and you've got yourself an A+ Mediterranean meal. 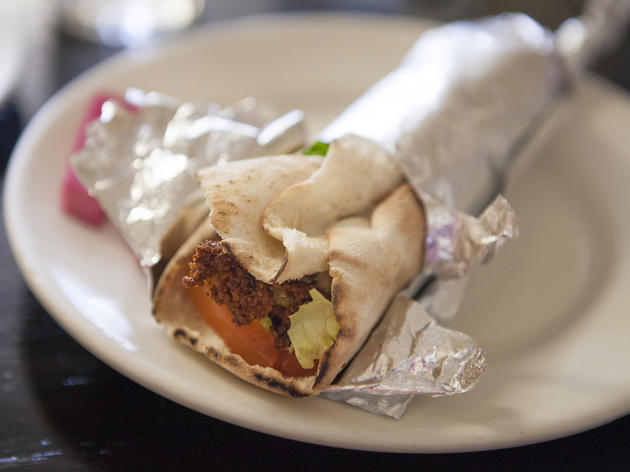 They're not screwing around at Skaf's. The traditional Lebanese restaurant, which has locations in both Glendale and North Hollywood, offers an impressive variety of traditional dishes with plenty of flavor. You’ll often find owner—and namesake—Salim Skaf manning the grill, taking orders and describing specials, like whole branzino and stuffed eggplant. The falafel sandwich, wrapped in tightly toasted pita, stands out as a filling snack at only $5.50; each delicious chickpea nugget is satisfyingly crispy and hearty. If you’re looking for a meal, we suggest adding some dolmeh ($5.95) and a side of hummus (4.95) to your order. 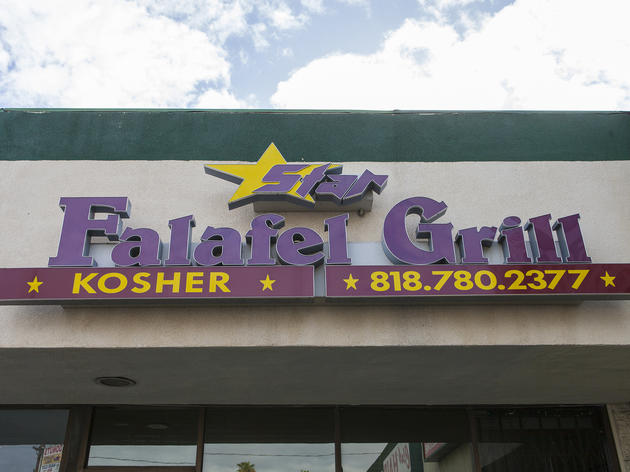 Walking into Star Falafel is like being instantly transported to Jerusalem and one of many no-frills shawarma joints that are part of the backbone of Israeli cuisine. You’re more likely to hear Hebrew from employees and customers than English, and the only art that hangs on the wall are photos of Israel’s landmarks and natural beauty. The menu is far from fancy, but it’s all delicious (and kosher). The true star, though, is the eponymous falafel. Each bite is refreshing and light with a crisp burst of flavor. We suggest opting for the fluffy pita ($5.50) or laffa sandwiches ($7) when getting your deep-fried chickpea fix. 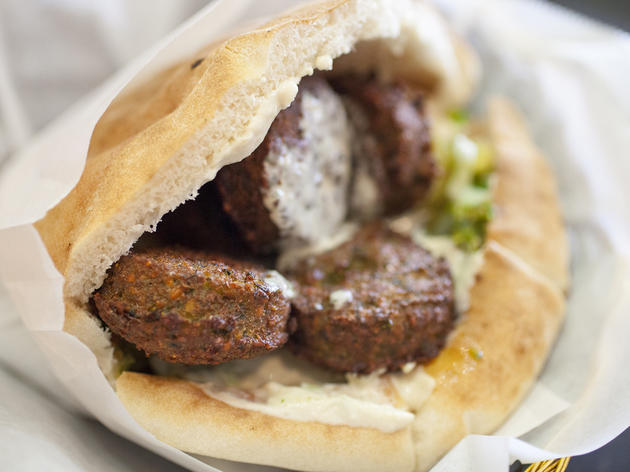 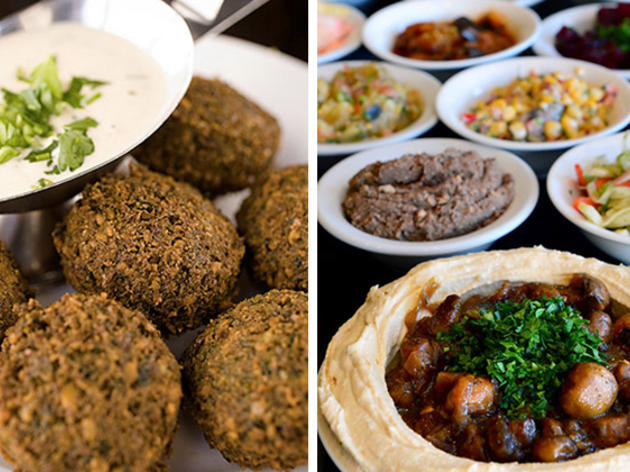 When you first enter Hummus Bar and Grill, you'll feel like you just walked into a restaurant in Tel Aviv. Located in the Tarzana Village Shopping Center, the sprawling space features inexpensive and delicious Israeli food, including their famous housemade hummus in seven different varieties. Start with an order of the assortment of house salads ($6.99 with an entrée, $10.99 without), which includes a sampling of Israeli coleslaws, babaganoush, eggplant salads and more. Pair the salads with an order of the falafel plate ($6.99), featuring six falafel balls with tahini sauce. Grilled fish, chicken, beef and lamb are all on offer as well. There is even a Kosher section on the menu for the observant. Not looking forward to trek to Tarzana? The restaurant offers delivery and catering as well.