In Los Angeles, when we think of food from across the border, we immediately think of tacos and sopes, moles and salsa verdes. There's another border, though, and while we're much further from our Northern neighbors, the influences and tastes of Canadian expats are starting to pop up in L.A. More specifically? Canada’s most famous culinary export, poutine, is gaining ground. A kissing-cousin to the U.S.A.’s own disco fries, poutine typically consists of thick-cut french fries covered in chicken gravy and mild, squeaky white cheese curds. So where can you find the decadent dish? Check out these French restaurants, dive bars and even an Indian restaurant serving Canadian-style poutine in Los Angeles. 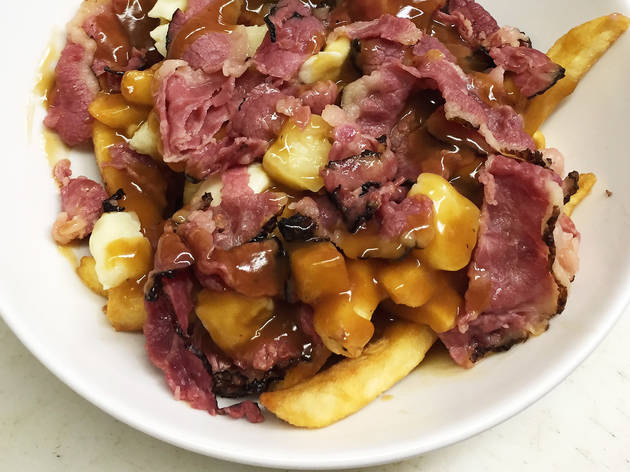 The outward appearance and majority of the menu suggest that Redondo Beach Cafe is a classic, Greek-influenced American diner. What sets Redondo Beach Cafe apart, though, is its dedication to French-Canadian style cuisine and culture. The walls are a paen to hockey, and scattered throughout the expansive menu are sections focused on “Poutine” and “Smoked Meat.” Amongst traditional plates of omelets and hamburgers, the poutine is served in funky, modern semi-circle bowls to best contain the large fries and heavy helpings of boldly-flavored gravy and chilled cheese curds. Smoked meat, a Montreal-style salty, briny midway point between corned beef and pastrami, comes on a number of sandwiches or incorporated into classic diner fare, like smoked meat Benedict. But it is perhaps best utilized as a topping for Redondo Beach Cafe’s poutine, and its addition is substantial enough to transform a snack into a full meal. Hungry eaters can add chicken breast, chili and even an over-easy egg to their poutine as well. 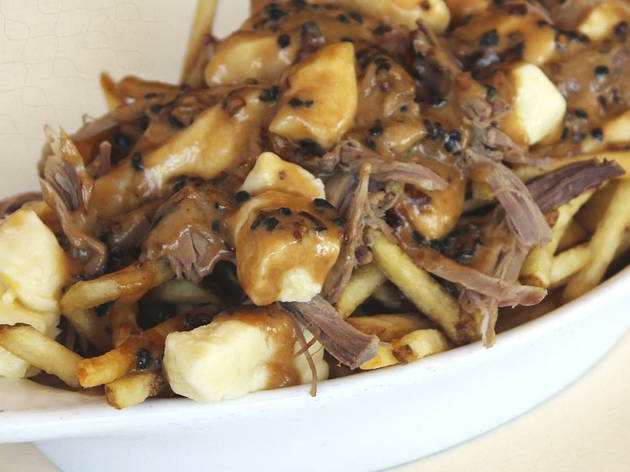 A spinoff of the popular French-Canadian bistro Soleil (right next door), P’tit Soleil focuses on smaller, tapas-like plates and a variety of poutines. More specifically Canadian than French, this may be the only place in Los Angeles to snack on the classic Montreal-style meat pie known as a tourtiere. Self-identifying as a “poutinerie," P’tit Soleil has a separate menu dedicated to their renditions of the dish, which, owing to the thin cut of the potatoes, delicate gravy options like peppercorn cream and high-end toppings like roast duck and foie gras, can be accurately described as upscale. Other options, including poutines with mussels, mergez or bolognese sauce, are novel variations that represent the cuisines of Canada and many other nations. 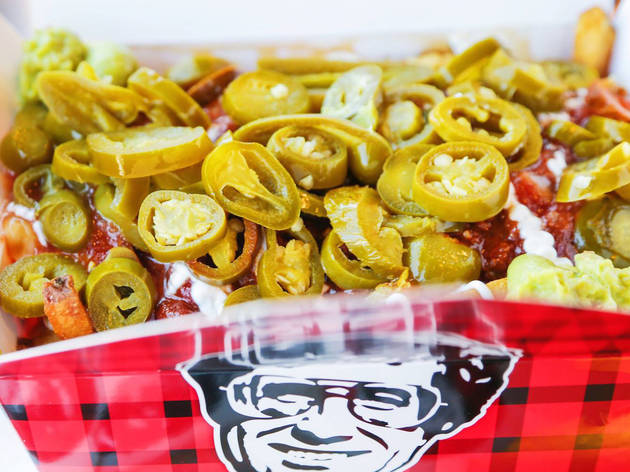 A poutine operation need not be a full-service, fancy operation. As intended, poutine is best eaten late into a cold night, with several alcoholic drinks in the system. Under those circumstances, Smoke’s Poutinerie, situated on one of Hollywood’s most trafficked throughways, begins to make sense. A small, perfunctory shop with a counter that seats four, Smoke’s is a sizable chain based out of Ontario that sells huge servings of very good poutine. The crisp fries are sold with a wild selection of toppings—bonus points for a swath of deep-Canadian styles, including a few topped with smoked meat. Though they are the world’s largest poutine chain, each location offers something catering to local tastes. Our local Smoke’s offers a Korean-style poutine, with bulgogi and kimchi atop the gravy and curds. 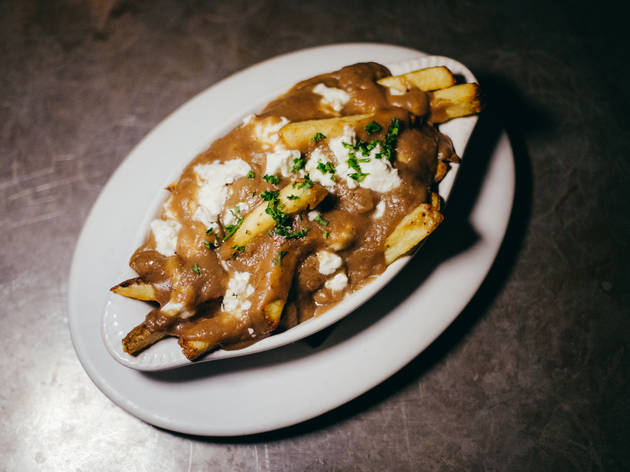 Jay's Bar isn't a restaurant, but a bar that serves food—albeit a bar that serves great food. Known for their delicious hamburger, Jay’s serves up a mighty delicious poutine. Like all great bar food, hungry customers order at the bar alongside a craft beer or an on-tap old-fashioned. Regardless of how many drinks you’ve had before the server brings it out, the poutine, served in a piping hot boat dish, definitely satisfies. Thicker style fries are topped with an excellent gravy, cheese curds and a sprinkling of fresh parsley that elevates poutine into the hallowed annals of American “bar food.” 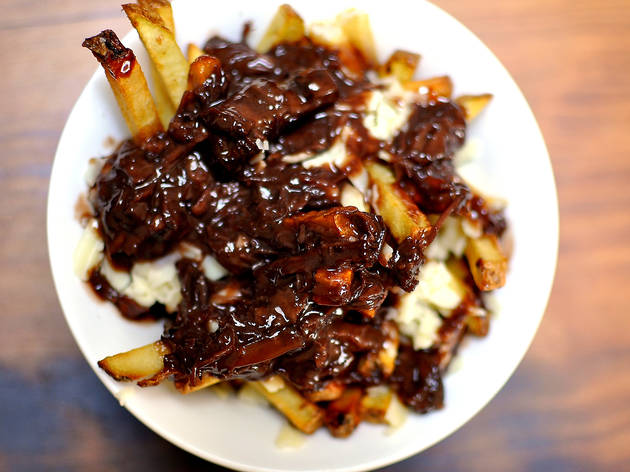 One of Los Angeles’s defining restaurants sells, peculiarly, Canada’s most recognizable dish. Known far and wide as the ultimate temple of meat, Animal specializes in serving underappreciated bits of cows, pigs, lambs and chickens. It’s no wonder then, that the chefs decided to reimagine something as overlooked as poutine (at least in the States). Creating the perfect fine dining version of the venerable street food, Animal’s version of the dish utilizes a gourmet oxtail gravy instead of the more standard chicken-based gravy. This classed-up rendition has become one of the restaurant’s beloved mainstays and helped introduce the dish to L.A.’s gourmands. 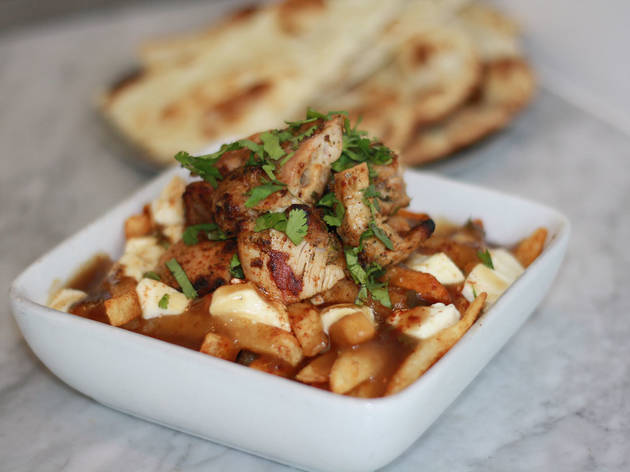 Why is an Indian restaurant serving poutine? Well, when it’s as well done as Badmaash’s, it doesn’t honestly matter that much (though, it also helps that the owners, the Mahendro family, spent a considerable time living in Canada). One of the exclamation points on their Indian-fusion menu (alongside a hamburger, cioppino and mussels), this poutine really wears the restaurant’s sub-continental influences on its sleeve. Topped with tender, smoky, lightly-dressed tikka chicken thigh meat, the dish serves as both a shared appetizer or an entire meal for an individual. Crispy garam seasoned fries stand up to the hot beef gravy, staying sturdy until the dish is empty, while a gentle dusting of chopped cilantro adds a lingering freshness to the proceedings. 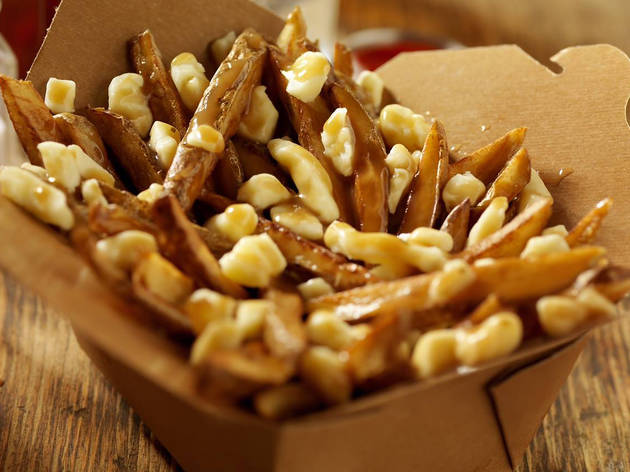 Alongside classic American counter food like hamburgers and chicken wings, Pasadena’s Spudds serves up almost a dozen different styles of poutine. Each of these variations, including Mexican, Philly cheesesteak and corndog, are built off of the classic accoutrements—chicken gravy and a generous covering of small cheese curds. Regardless of additional toppings, the freshly-fried, hand-cut french fries are the star of the dish, appropriate considering the name of the operation. (Following through with the eponymous tuber, Spudds also puts together a variety of baked potatoes.) Unique among poutine restaurants, Spudds serves a sweet version of the savory standby using sweet potatoes covered by the traditional gravy and cheese curds. 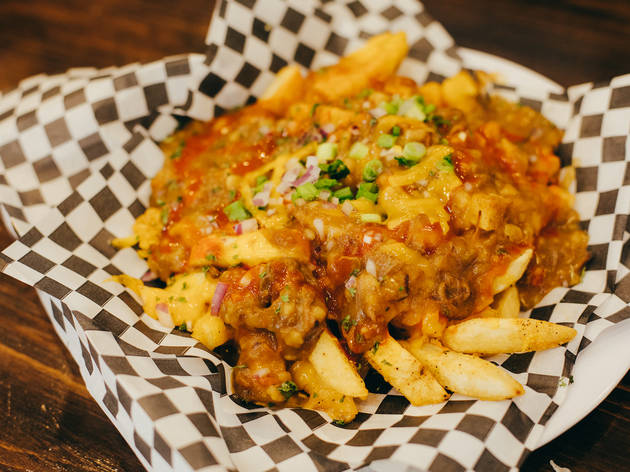 With a classic New Orleans menu that includes po’boys, muffallettas and gumbo, Little Jewel might not seem like a place to try Canadian food. But just as Canada is influenced by French culture and cuisine, so too is New Orleans—and poutine’s components (fries, gravy and cheese) are also ingredients in the most traditional type of po’boy. Still, Little Jewel does have poutine on the menu, called “French Fry Poutine with Debris Gravy and Cheese,” and it is a delicious Cajun take on the Canadian classic. Nicely spiced roast beef gravy covers thick, bright hot french fries. Shredded cheddar cheese is used in place of curds, which swaps out texture for tang, though the heat of the potatoes melts everything down into a gooey sauce. 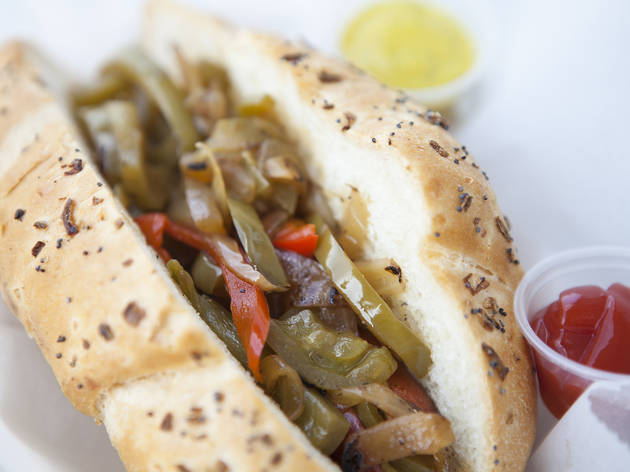