This being LA and all, celebrities—and celebrity wannabes—are everywhere. But somewhere between the Joseph Gordon Levitts and the chain-smoking Spidermen on Hollywood Boulevard, there's a breed of stardom that's a bit more special. Every neighborhood in every city has its characters, they're just a tad more colorful—and perhaps a tad more famous—in Tinseltown. Here are eight of our favorites, known for everything from chiseled bods to animal rights, er, activism. How many have you spotted? 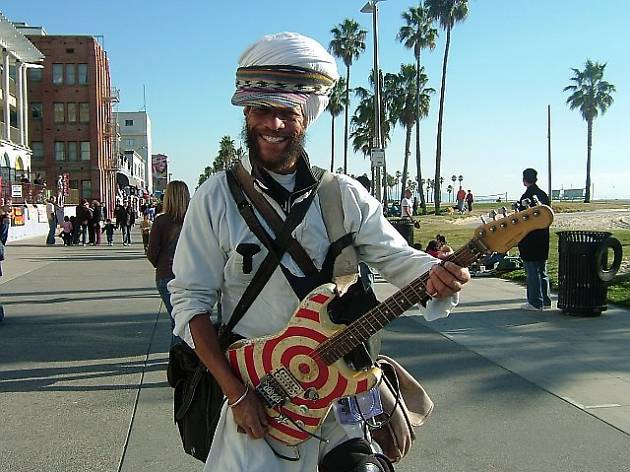 Harry Perry has been performing his original songs on the Venice Boardwalk since 1973. He plays an electric guitar while roller skating, and often wears a large turban.

Where to find him: Venice Beach

Fun fact: Perry is pretty handsome for a busker in his 60s... that smile! Those eyes! 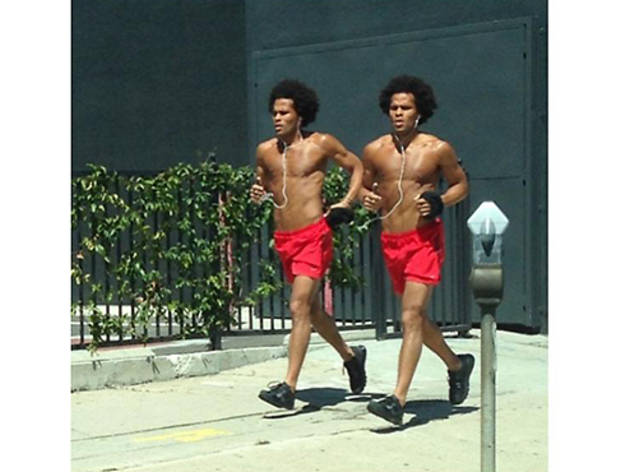 It's a wonder these two don't cause more car crashes. Twin brothers Garry and Jason Clemmons have been jogging (often shirtless and always glistening) in and around Brentwood for years, with matching outfits and in unison. It'd be cute if it wasn't so weird, which it would be if they weren't so ridiculously good looking.

Where to find them: Brentwood

Fun fact: The twins aren't just fitness enthusiasts—they're also models (duh) and "actors," boasting a credit as themselves on an episode of Cougar Town. 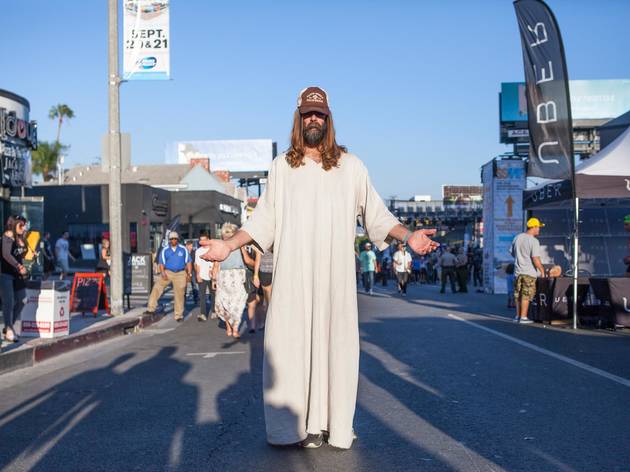 Whether he's dispensing advice at a bus stop or rocking out at the Sunset Strip Music Festival, Hollywood Jesus (aka Kevin Lee Light) has made himself a staple of local LA pop culture, not only looking the part, but acting it as well.

Where to find him: Anywhere and everywhere (he's omnipresent!), though most often in Hollywood

Fun fact: Mr. Light was born here, but has only been LA's own personal Jesus since 2005. And rumor has it this particular Jesus is quite the baller, from cruising in a Benz to randomly picking up strangers' tabs around town. Hallelujah! 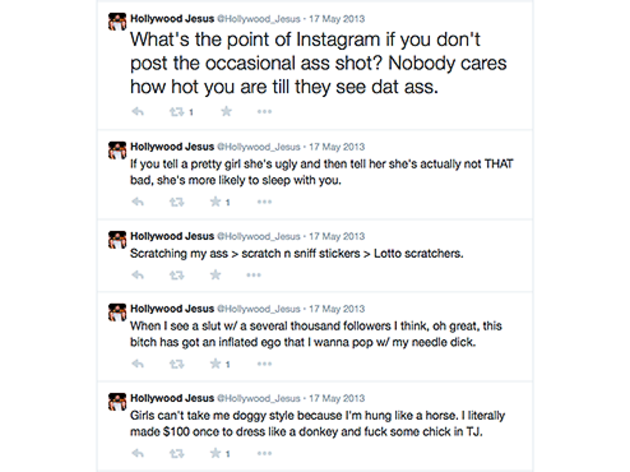 Good may have prevailed over evil, as we haven't heard from this imposter in a while. But those looking for LA's bearded savior a year ago may have come across some pretty nasty musings from @Hollywood_Jesus, a nefarious Twitter account that would offend the sensibilities of any true believer.

Where to find him: The Internet 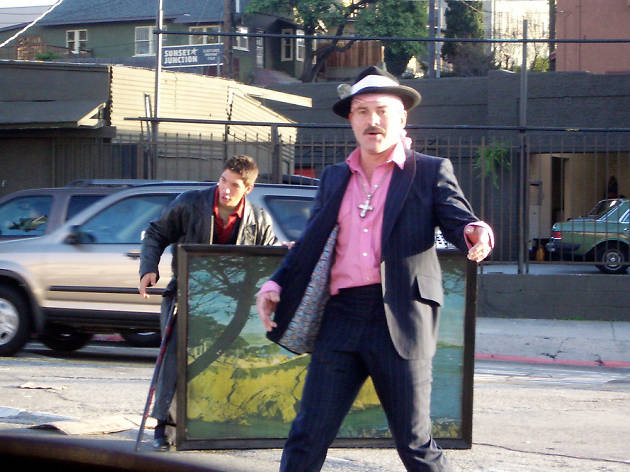 The people of Silver Lake have a love-hate relationship with Five Dollar Guy, or simply Eddie. He roams the streets loudly hawking his wares (read: things he finds in the trash) for $5, which is a bit obnoxious. But sometimes he has a gem (bike wheel, lamp, etc.), and his outfits are always on point.

Where to find him: Sunset Junction in Silver Lake

Telltale signs: Bling and pink bandanas accessorizing either a sharp suit or jorts with no shirt. Possible fedora.

Fun fact: Eddie has been known to crash more than a few house parties in the neighborhood. Co-ops and punk houses love him, but the higher he gets up the hill, the less likely he is to get a warm welcome. 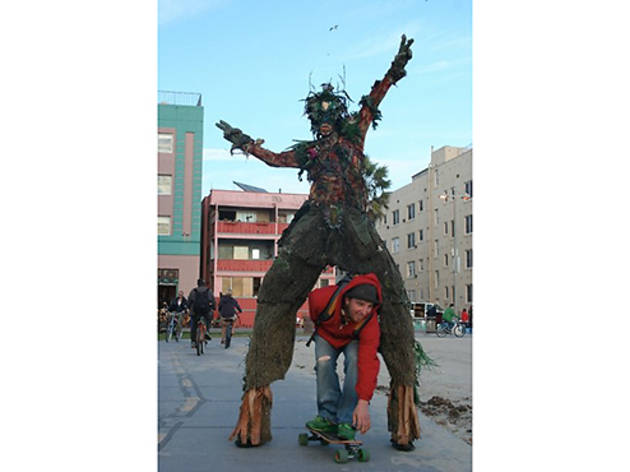 Fifty-four-year-old Lionel Powell has been busking along the Venice Boardwalk dressed as a tree for more than five years. He's also attended a few parties (hello, Playboy Mansion) and charity events for eco-nonprofits—he's a giving tree.

Where to find him: Venice Beach

Fun fact: Before he was Tree Man, Powell was a giant spider named Spydek and a robotic scarecrow named S.I.R. Crow. We prefer him as a (slightly less scary) tree. 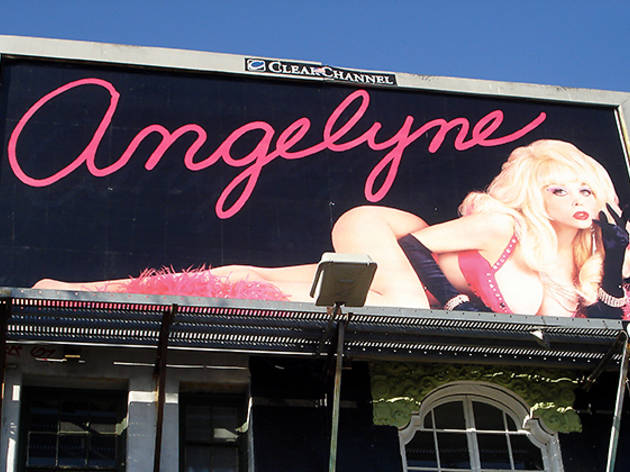 Never a star but truly a local celebrity, Angelyne's face and voluptuous bod have been gracing LA billboards since the mid-1980s. She's never done much work, but has certainly had work done, which you may catch a glimpse of when she cuts you off on Sunset Boulevard in her hot pink ride.

Where you can find her: A billboard near you

Fun fact: Angelyne ran for governor of California in 2003 and inexplicably finished 28th out of 135 candidates. Her mascot was a pink maltese named Buddha and her slogan was "We've had Gray, we've had Brown, now it's time for some blonde and pink." 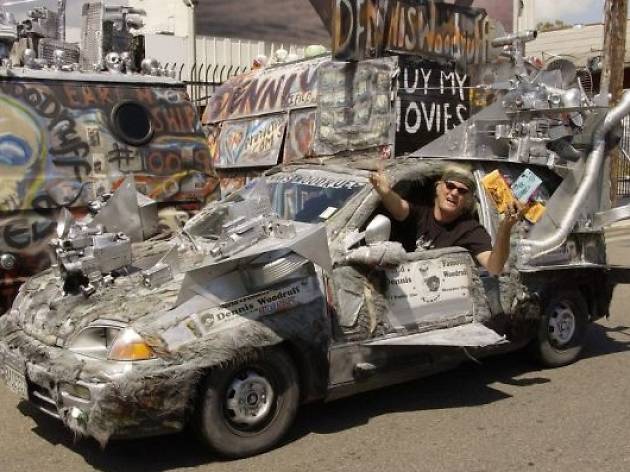 Dennis Woodruff is best known for his art cars and shameless self-promotion. At first he was promoting himself, trying to break into the movie business. When that didn't work out, Woodruff said screw it and made movies himself, selling them out of the back of his cars.

Where to find him: Hustling on the streets

Fun fact: Woodruff has a spastic yet surprisingly comprehensive website, which you can check out here 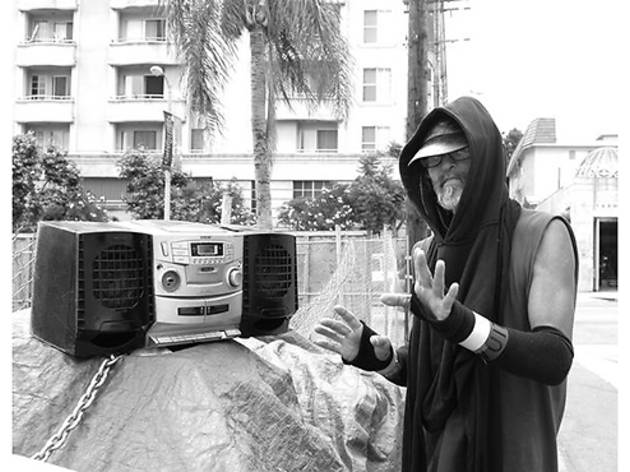 A graduate of Pepperdine drafted to the Kansas City Royals, John Wesley Jermyn developed schizophrenia in the 1970s but refused to medicate. He's been skating and dancing on the streets of LA since the early 80s.

Where to find him: Robertson Boulevard

Fun fact: There's a local clothing label that sells shirts printed with stylized images of Jermyn, who signed off on the project and receives royalties from each sale. 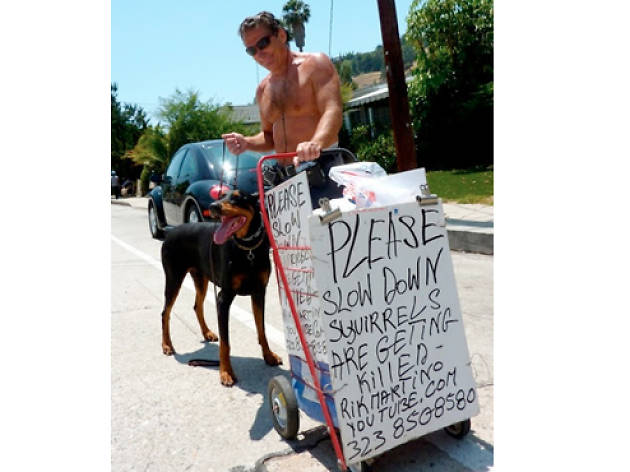 Also known as Squirrel Guy, fitness instructor/Italian teacher Rik Martino takes on odd jobs so he can afford to feed the pigeons and squirrels of Silver Lake. He carries his bags of seed in a grocery cart plastered with signs to "please slow down, squirrels are getting killed!"

Where to find him: Trader Joe's or Gelson's parking lots

Fun fact: The Birdman doesn't stop at vermin—he's often been seen giving money and snacks to the homeless and pleading with them to lead healthier lifestyles.