With his first NYC retrospective just opened at the New Museum, L.A. artist Jim Shaw talks about his visionary work

An artist who works in a variety of styles and mediums, Jim Shaw is best known for intricate drawings that illustrate his personal life and dreams, as well as his fascination with the fringes of American society. Shaw had been friends with artist Mike Kelley from the time they were both students at the University of Michigan until Kelley’s death in 2012. The two cofounded the alt-rock art band, Destroy All Monsters, and later migrated to Los Angeles, where they attended CalArts for graduate school and established themselves as artists who plumbed the weirdest depths of popular culture. On the occasion of his retrospective at the Lower East Side’s New Museum (one of our top art shows in NYC this fall), we take a look at some of Shaw’s art that touches on themes like religion, politics and pop culture in a selection of works spanning his career. 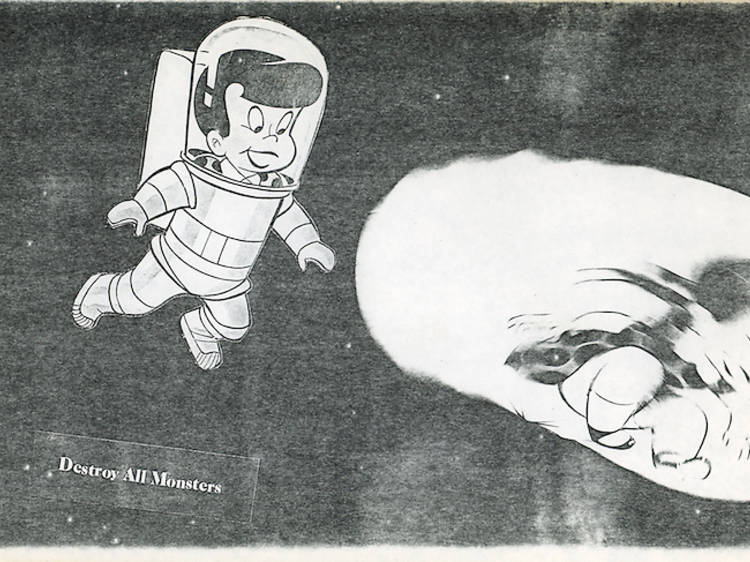 “Mike Kelley, Cary Loren, Niagara and I started the band Destroy All Monsters. I could see that the things I was good at—painting and drawing—were washed up as art forms. I didn’t think of myself as a conceptual artist, so being in a rock & roll band made sense. A lot of people from art schools were making the same decision at the time, like the members of Devo and Talking Heads. Anyway, I’d been working at the student store at the University of Michigan, and they had this Xerox machine overloaded with toner, so copies came out looking almost like etchings. I used it when I started making these ads for Destroy All Monsters. I cut up old magazines and collaged the pieces on the copier. It was free form: I’d move things around and see what worked. They were more like subliminal advertising than announcements, though, since the band hardly ever played. In fact, I never posted any of them.” 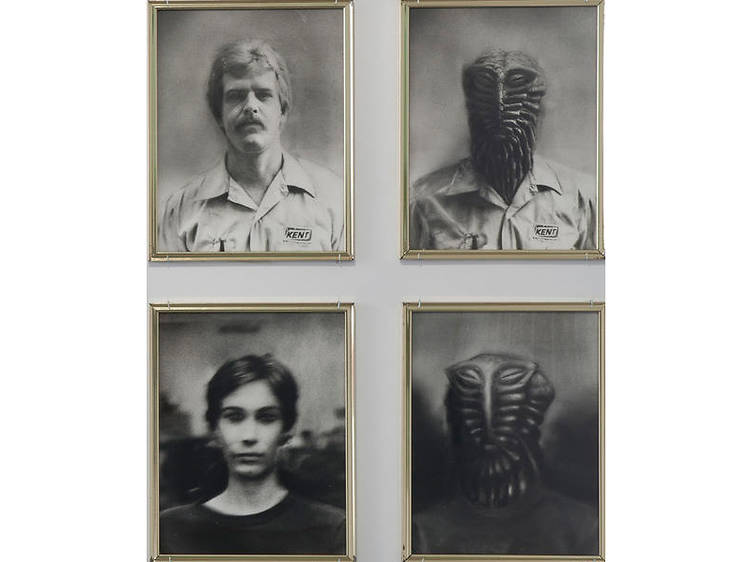 “A number of these works were based on self-portraits and photos of fellow students at CalArts. They started when I was trying to find a way to earn a living after graduation and thought maybe I could do some illustration work. I had a portfolio of airbrush and pencil drawings based on noir film stills, and I then started to distort them—squeezing the faces and such.” 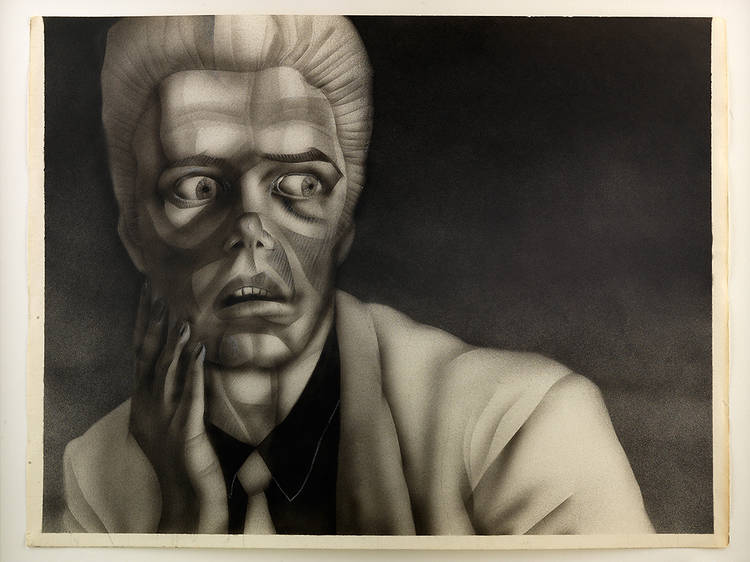 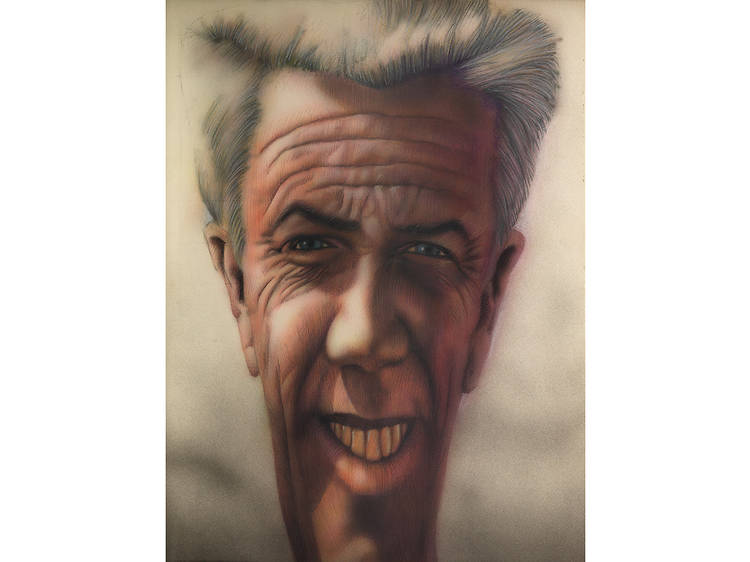 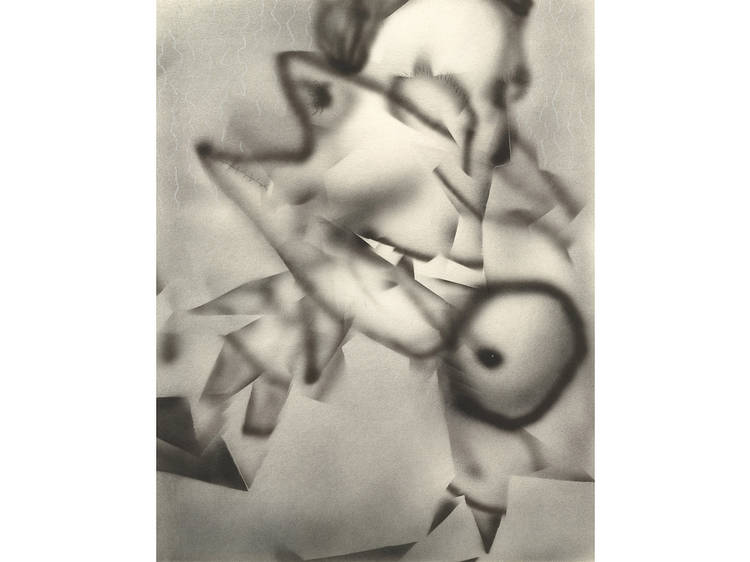 “For a while, I worked at a mask factory in the Valley, which is where I learned to use the airbrush. So I created this 'Life and Death' series of expressionistic works, where I would randomly lay down cutout pieces of paper and airbrush around them. Randomness plays a big part in my work.” 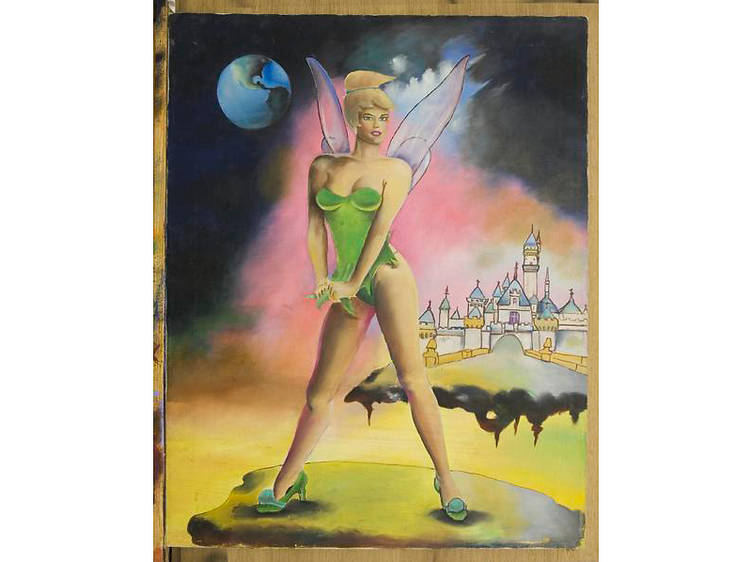 “I’d started going to thrift stores and yard sales back in high school in Michigan, where I first came across paintings like this one. I bought some at the time, but when I moved to Los Angeles, I really began to accumulate them. Whenever I drove cross-country, I’d buy even more. I was always attracted to the weird ones. I showed them at the public library in Glendale and then later in my first show at Metro Pictures in 1991. It hadn’t occurred to me how different they would look in a gallery. I’ve made paintings that resemble them, but I didn’t want to seem guilty of copying what I collect. So, I fix whatever looks wrong on my versions, since thrift store paintings always seem off.” 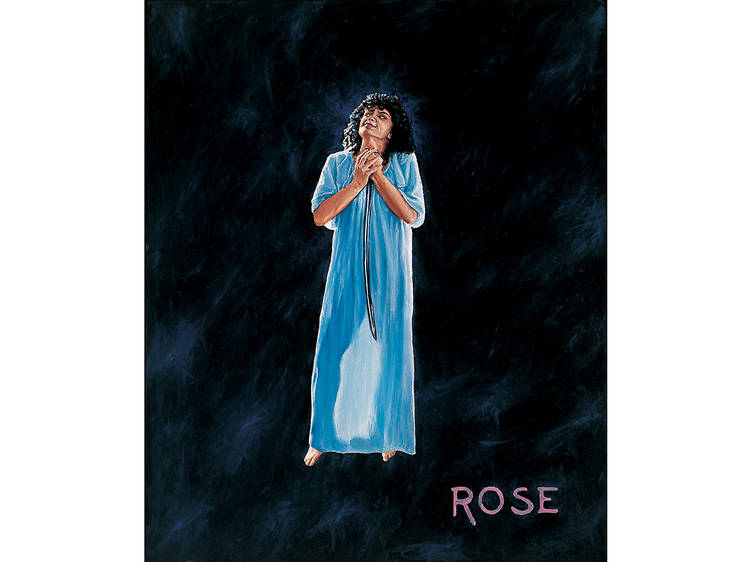 “After CalArts, I got a job doing special effects for TV commercials. I was driving home from work one day and started to think about Iron Butterfly and their song, 'My Mirage.' I took their title for a series about coming of age in the 1960s, though it was secretly about the America’s Puritan legacy. During the 1960s, this pagan, Dionysian thing had taken over, but by the ’70s, there was a backlash and everything seemed to go back to a more Puritan-Christian mode. It was sort of like the return of the repressed. I wanted to make about 100 pieces, all the same size but in different styles. Then I came up with the idea of doing a book with different chapters containing motifs strewn throughout. They have references to mythology and Christianity and also to high and low culture. The whole thing is based on both personal history and observation. The project eventually came to include sculpture and video, but it was always a book first, because books were how I’d discovered art as a teenager.” 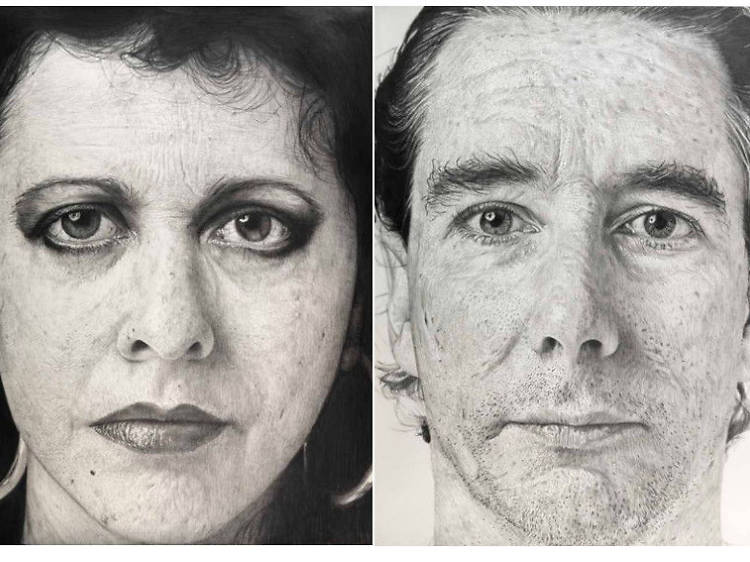 “I made two sets of these 'Giant Face' paintings, one in black and white and the other in color. The black and white ones were all based on photos of friends and the color ones on people of different ethnicities. The paintings were divided into large squares, combined into a grid that was 8 by 77 feet. The identities of the subjects got merged into this sort of abstraction made out of skin. I wanted these works to be completely different from the 'My Mirage' series because I thought the only way I could survive was to admit my inability to stick to something. I figured that since artists with signature styles were the backbone of the art world, being one who changed styles would be more unusual.” 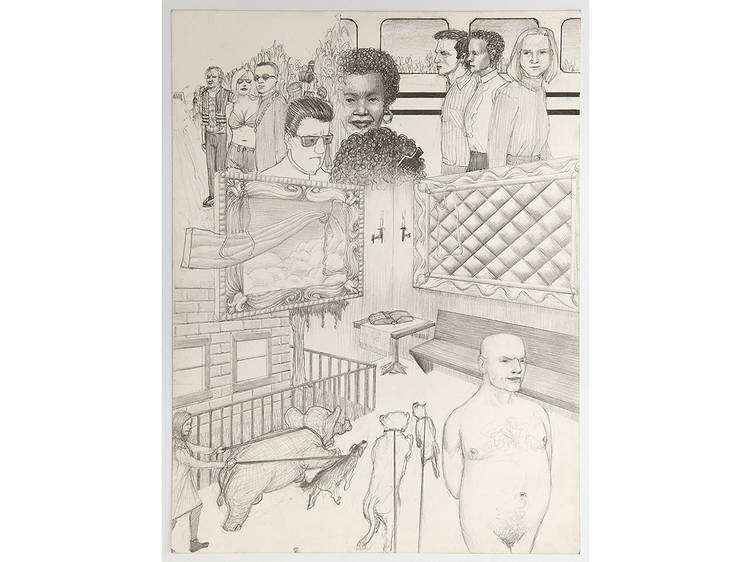 Courtesy the artist and Blum & Poe

“The 'Dream Drawings' came right after the 'Giant Face' paintings. I was showing around Europe, and dealers there were telling me I needed something to offer younger collectors. So, I made the 'Dream Drawings' on airplanes and in hotels: I’d dream about something and drew what I remembered the next day. I did drawings based on dreams about my years at school or my work in special effects. I even did some based on erotic dreams, but I only shared those with my shrink, until I had a show of them in Paris. I thought, this is France, no one is going to care about that. When I started to get up early in the morning to take my daughter to school, the dreams stopped.” 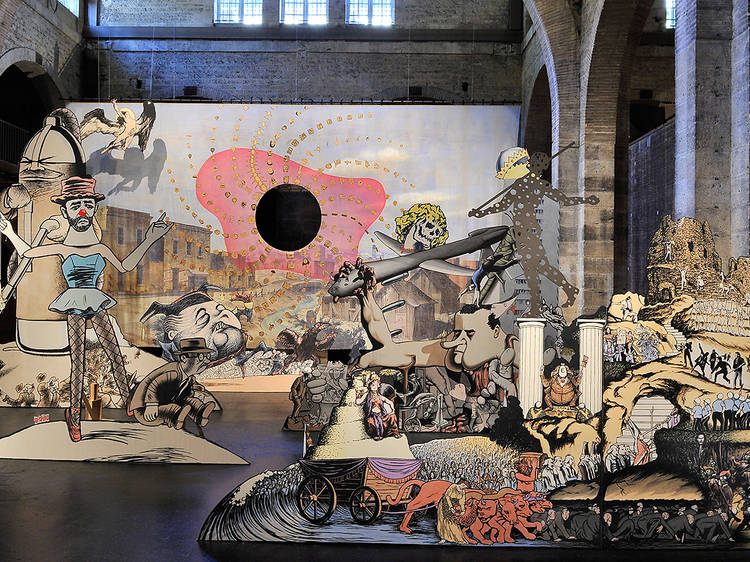 Jim Shaw, Labyrinth: I Dreamt I was Taller than Jonathan Borofsky (2009)

“Jonathan Borofsky was a teacher at CalArts when I was there. He made art you could aspire to, as opposed to my teachers at the University of Michigan. A group of his students created murals, which were hyperpolitical and kind of corny. I thought of them years later when I was asked to make something on a similarly grand scale. I created this installation done as stage flats that visitors could walk through and included references to the sad clown/ballerina piece that Borofsky had done as a public art project in Venice, California. I also added allusions to tarot cards, Picasso’s Guernica, Rembrandt’s The Night Watch, Led Zeppelin, the Spanish Civil War, the French Revolution and Predator drones.” 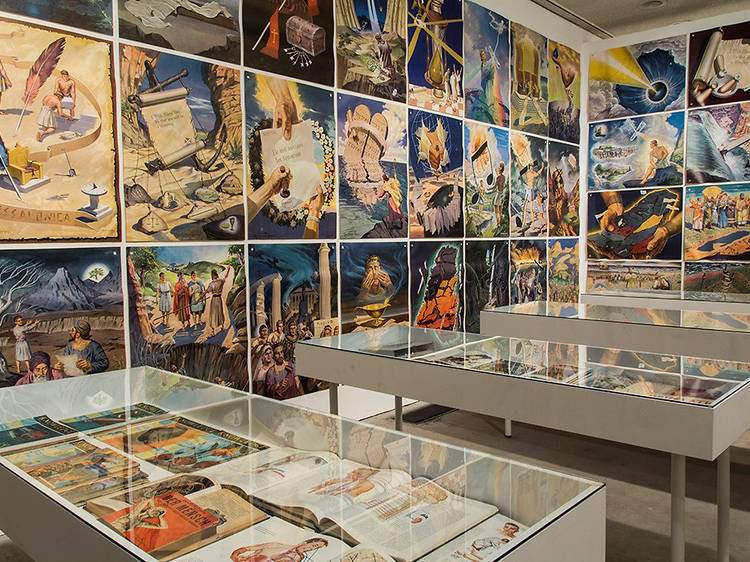 “This installation is a collection of materials I’ve found over the years and is all about the different ways in which people visualize the information they want to disseminate as propaganda. It includes illustrations from the Book of Revelation, medical drawings, bible-study pamphlets, church banners, record album covers and more. I’ve always been drawn to marginal stuff, even as a teenager. I remember one time when I was looking through old books to find images I could make into collages, I came across The Voice of Venus, by Ernest Norman, a psychic who cofounded the Unarius Academy of Science in El Cajon, California, with his wife, Ruth. They were into channeling extraterrestrials and things like that. Ruth took over after Norman died and became known as Spaceship Ruthie. Their book was the first fringe thing I collected. So things like that have always fascinated me: weird religious imagery on laundry mats, evangelists on cable TV. I’d find related items at flea markets, or people would give them to me. That’s where everything in this piece comes from.” 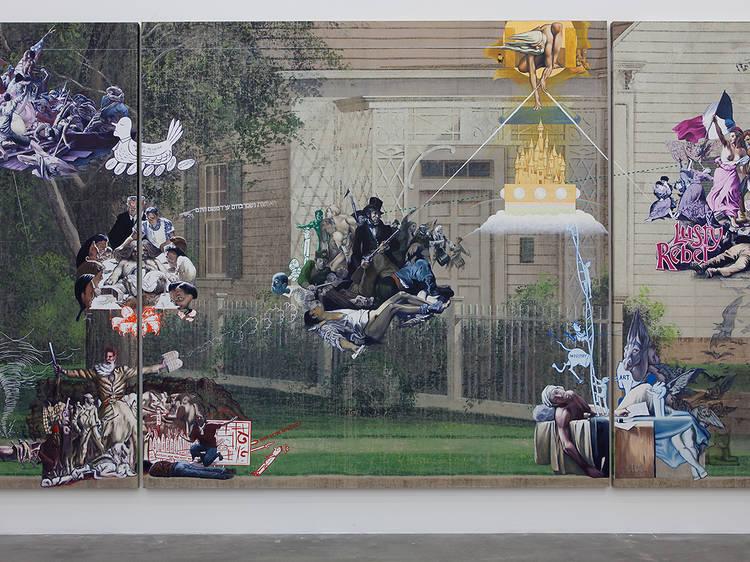 “My wife [Marnie Weber] said she needed some kind of background for a video she was making; that’s how this series of banners got started. I had found these old theater backdrops around 2004 and thought, I’ve got to do something with these things, so I started buying them and painting on top of them. We were in the midst of the Iraq War; it was such a sad time, and I felt compelled to make work about the era between Reagan and Bush, when the Republican Party had taken over the working-class vote that used to be Democratic. I felt that the working class had been left behind, so these pieces are about the illusion behind the Republican machine. Some of the images are based on my dreams and others on political events or paintings with political themes.” 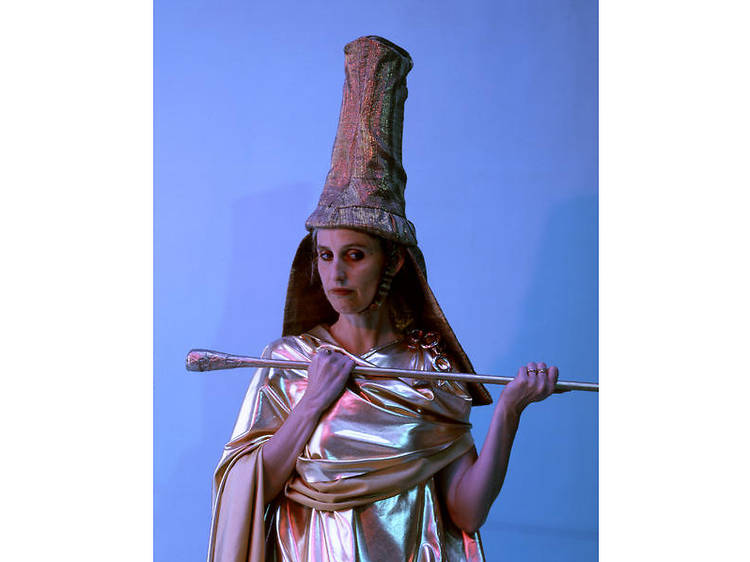 Courtesy the artist
Jim Shaw, The Whole: A Study in Oist Integrated Movement (2009)

“Oism is a nonexistent religion I made up. I see it as being part of a long American tradition of making up your own religion, from Mormonism through Scientology. I based it in upstate New York, where a lot of this sort of stuff happened, and not just Mormonism. American feminism and spiritualism were born in the Rochester area, where my family originally came from. But unlike 'Dreams' or 'My Mirage,' Oism doesn’t come from subconscious: It’s based on research, which I want to do more of, so it’s an ongoing process. The “Oist Movie Stills” are staged photographs of people in costumes. For the video, The Whole: A Study in Oist Integrated Movement, I had the same people and also a banyan tree, which is an icon of the religion. They go though these Oist exercises—a kind of spiritual yoga or hula where the movements have actual meaning—which I created with a choreographer.” 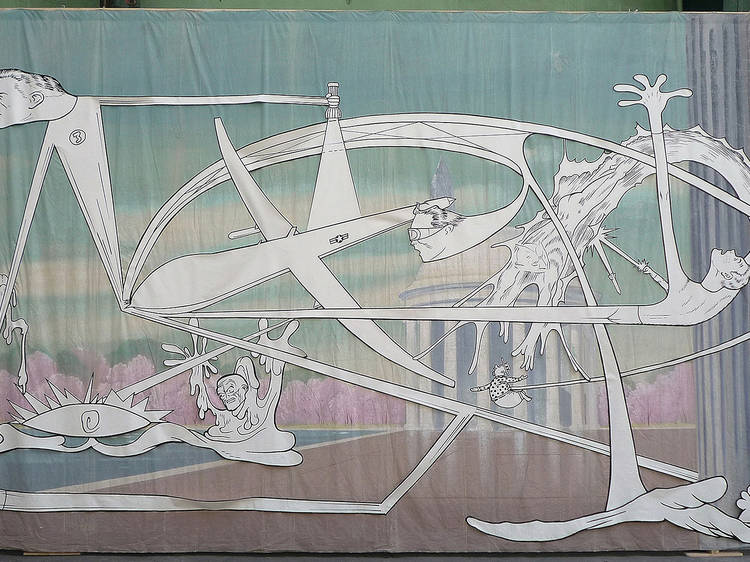 “Jim Shaw: The End Is Here”

This long overdue East Coast survey, Shaw’s first in a New York museum, should go a long way in introducing his work to audiences outside of Los Angeles.