The Metropolitan Museum of Art is a veritable universe of treasures, from tiny golden pins to an entire Egyptian temple. But the heart of its collection remains the paintings that run the gamut from the Old Masters to the giants of Impressionsim and Modernism. The Metropolitan Museum of Art artwork listed below represents some of the best examples in the top New York attraction’s vast, encyclopedic holdings, making it one of the world's best art museums.

RECOMMENDED: The full guide to the Metropolitan Museum of Art New York, NY 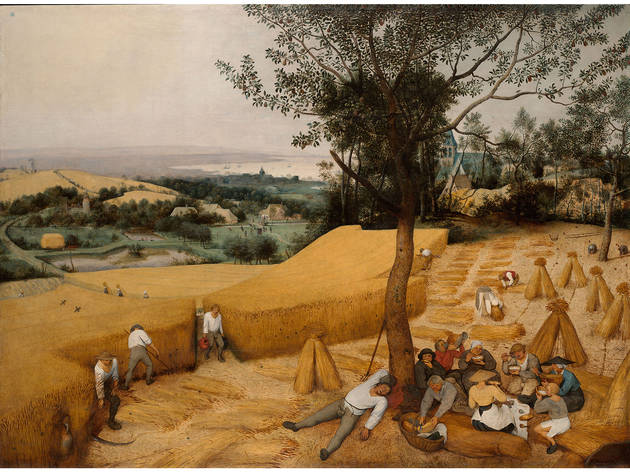 Bruegel's fanfare for the common man is considered one of the defining works of Western art, but it wasn't always so. Sought out by patrons in his own lifetime, Bruegel emphasized the ordinary in a way that made him seem old-fashioned in the years following his death; his reputation remained in eclipse until 20th-century tastes revived his quotidian subject matter and vast, cinematic vistas. This composition was one of six created on the theme of the seasons. The time is probably early September: A group of peasants on the left cut and bundle ripened wheat, while the ones on the right take their midday meal. They're eating bread and drinking bowls of milk; one guy is sacked out with the top of his pants unbuttoned. This attention to detail continues throughout the painting, a procession of ever-granular observations receding into space. It was extraordinary for a time when landscapes served mostly as backdrops for religious paintings. Instead, Bruegel articulates a humanistic vision in which the ordinary outshines the divine. 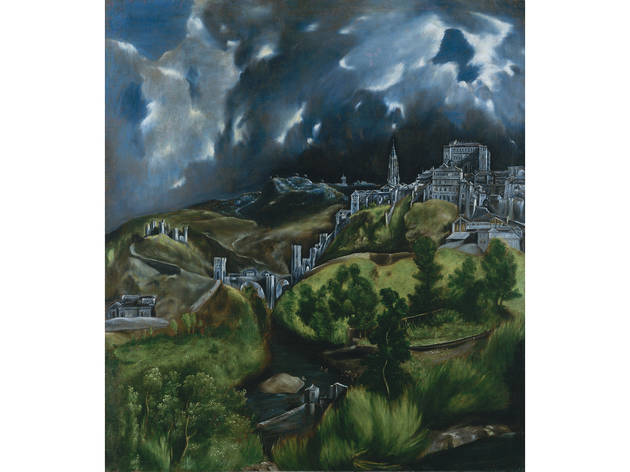 Domenikos Theotokopoulos—known more familiarly as El Greco ("The Greek"), a name he picked up after moving to Toledo, Spain, in 1577—was a major influence on 20th-century Cubism and Expressionism. It's plain to see why from this landscape of the city in which he created his greatest works: It looks like it was made in the 1900s, not the 1600s. Actually, its date is a mystery; it was listed on an inventory of works found in his studio after he died in 1614, but that is all that's known. In any case, this brooding depiction captures the city's eastern half as seen from the north, but El Greco takes a number of liberties with both the terrain and the architecture. The cathedral and its spire, center right, couldn't have been seen from this vantage point, so it's placed just to the left of the hulking Alczar, the royal palace. More astonishing is the nearly abstract quality of the composition overall—the furious storm of green, brown and black describing the hills in the foreground, and the frenzy of brushstrokes limning the sky. Both are stitched together by the meandering line of buildings. With his suggestion of a divine light breaking through the clouds, El Greco's treatment is a spiritual evocation of Toledo, Spain's religious capital in his day. 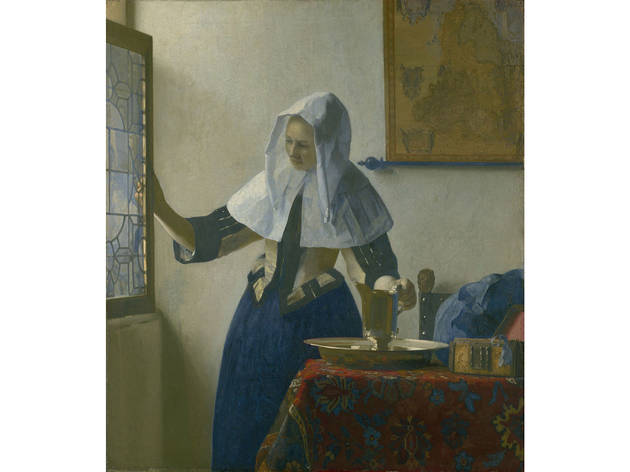 Vermeer achieves something astounding here: representing light as something tangible—a medium we swim in like fish. Many have argued the Vermeer used a camera obscura, and certainly the soft blur he employs here foreshadows photorealism. More importantly, each of the elements—the window on the left, the map on the wall, the chair underneath, the table in the foreground and the lady of the house herself—are exquisitely balanced, as are the colors and textures describing them. We see a women standing with one hand opening the window, the scene's source of light, and the other hand on the silver pitcher, the item most able to reflect it. She spans the conceptual space between illumination and illuminated, illustrating not only a domestic idyll, but a state of grace. 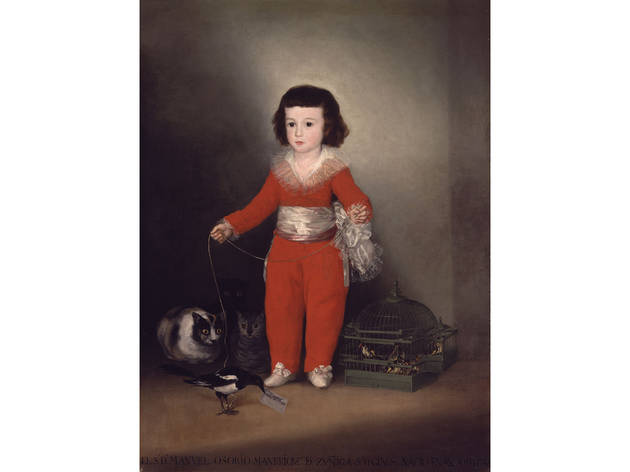 The work of Francisco de Goya y Lucientes marks the transition from Old Master tradition to the birth of modern art. Beginning in the 1790s, his work shifted from bright, colorful depictions of peasants at play to much darker subjects: lunatic asylums, nightmares and the horrors of war. It's easy to suppose that this stylistic change was prompted by events. Goya became court painter to a Spanish dynasty in deep decline, and watched from afar as the French Revolution unfolded. He personally experienced one result: Napoleon's 1808 invasion of Spain. This image of an aristocratic child was probably painted after the boy's death at age eight in 1792. A postmortem provenance would explain the elegiac tone. Only his finery gives us an indication of his status; otherwise, he stands in a shallow space empty of everything except his pets: a cage of finches, a magpie on a string and a pair of evidently hungry cats. Though his face is wreathed in a penumbra of light, the rest of the composition is plunged into a brown murk that throws his red outfit into sharp relief. In this play of contrasts—light and dark, color and its relative absence, life and death—the painting evokes epochal transformations and Goya's reaction to them. 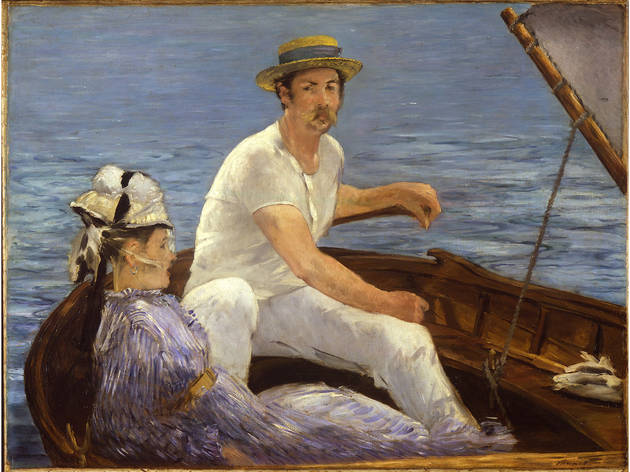 Painted at Argenteuil on the Seine, where Manet often spent time in the company of Monet and Renoir while summering at his family home across the rive at Gennevilliers, Boating’s fluid brushwork, outdoor setting and leisurely subject matter makes it appear like a typical Impressionist work limned en plein air. But its scale and formal compositional sense reveal that is was made in Manet’s studio. The man at the tiller looks directly at the viewer, while the woman laid out along the bottom of the picture just below his knees sits up on her elbows at an angle. Together, they form a triangle echoed by cropped bit of sail at the upper right hand corner—which looks, for all the world, as if the artist had peeled back the canvas to reveal the space underneath. There’s even a still life of caught fish heaped in a small pile on the lower right. Boating contains all of the hallmarks of Manet style, which wasn’t about capturing a moment, but was instead a visual essay on form and genre that also played with the viewer’s perception. It large expanses of color also reveal the influence of Japanese prints on his art. 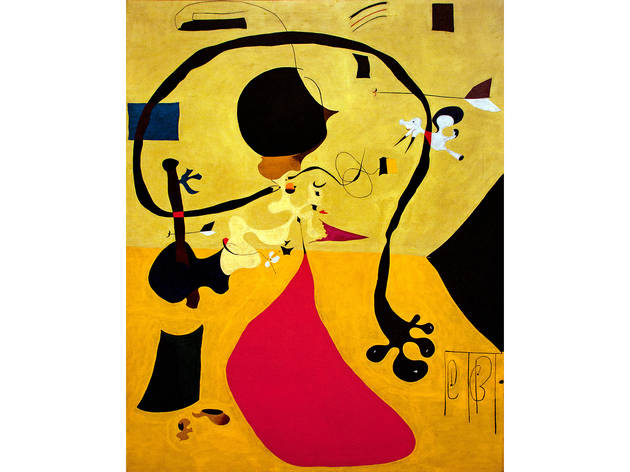 Miró is generally considered to be one of most prominent figures in Surrealism, known for bold, graphic explorations of dreams and the subconscious. But during a ten-year period starting in the late 1920s, he began to experiment with the very act of painting itself, becoming what we’d call a deconstructionist today. He described his role as an “anti-painter” out to “assassinate” the medium. Of course, he did no such thing. Instead, he broke painting down into its constituent elements of figure and ground, support and surface. He enlarged the possibilities of the medium, making forays into collage and assemblage. He also reexamined modernism in the context of art history, pitting it against the old masters of yore. Dutch Interior (III) is a case in point. It’s one of three compositions inspired by postcards of 17th-century Dutch genre scenes that he picked up during a two-week trip to Holland. This particular image isn’t based on an interior at all, but rather a hunting scene of an archer going after birds—transformed here into an interplay of the artist’s signature amoeboid shapes. Even so, you can make out the hunter, his avian quarry and his arrows as they fly through the air. 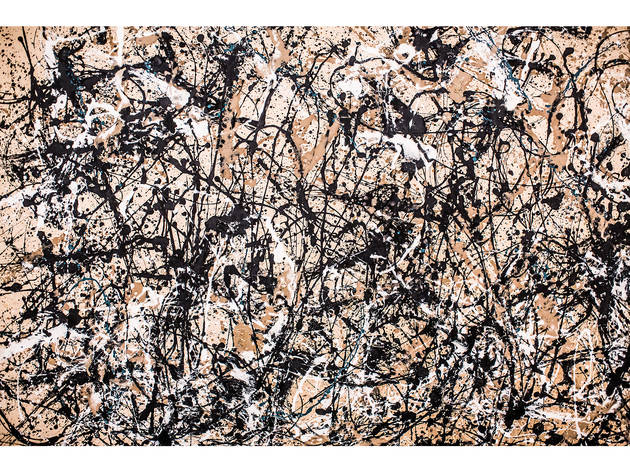 Pollock revolutionized abstract painting with his so-called “drip,” method, in which he’d lay a piece of unprimed, un-stretched canvas on the studio floor, and pace around its edges, leaning over to drizzle or fling house paint out of can to create his compositions. Though the results could look quite chaotic, his technique was quite controlled, the result of planning as well as intuition. In Autumn Rhythm, Pollock builds up layers of interconnected marks that suggest a web of synaptic activity, as if he were somehow mapping the brain. The title, however, evokes a change of season captured as a vibrating force of nature. Whatever else the paintings may or may not describe, they are a record of Pollock’s movements, representing a process in which the artist’s hand is revealed in an act of performance art. Autumn Rhythm was one of the last of the classic drips paintings created between 1947 and 1950. In 1951, he moved on to a series of works colloquial know as the “Black Pourings,” which were bleaker in tone and also represented a re-engagement with figurative art. Unfortunately, collectors had little interest in them, and Pollock’s state of mind declined in over the next five years until his fatal, DWI car crash 1956. 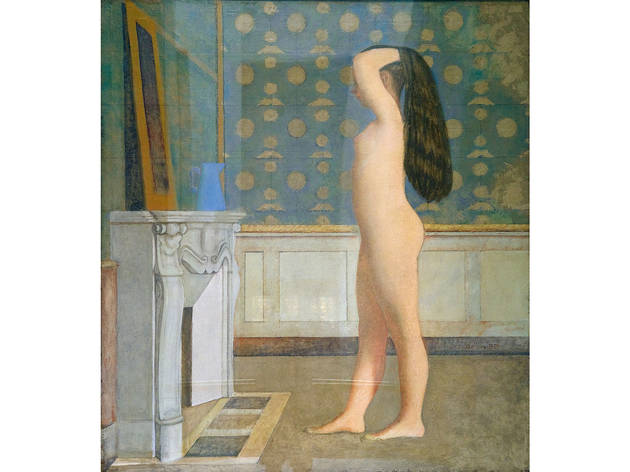 Born Balthasar Klossowski de Rola into a cultured French-Polish family, Balthus bucked the modernist trends of the 20th-century’s first half, embracing instead a figurative style with dark sexual undertones. He was a realist, but one who eschewed naturalism for a heavily stylized, mannerist approach that suited the surreal drama of his subjects—the most favorite of which were young girls on the cusp of puberty. The effect of his approach could be quite uncanny, with figures that seemed at once waxen and electrified with an erotic charge. Early on, his palette often resembled an Old Master painting yellowed with age. But starting around mid-century, he lightened his color scheme, most notably in this image of teenage nude examining herself in a mirror. Rather than appearing vulnerable, the girl possesses a sculptural monumentality abetted by the work’s life-size scale. Bathed in silvery light, she seems to have miraculously stepped out of ancient frieze into a room of a typical bourgeois home.