We present the top ten artworks by Pablo Picasso, one of history’s greatest and most influential artists

Born in Málaga, Spain, Pablo Picasso (1881–1973) is undoubtedly one of the most famous artists ever and for good reason. His name is virtually synonymous with modern art, and it doesn’t hurt that he fits the commonly held image of the outlaw genius whose ambitions are matched by an appetite for living large. He was a champion womanizer and wasn’t hesitant about spending the money fame had brought him. (By the late ’50s, he owned five villas in the south of France.) And yet there’s no denying the fact that he changed the course of art history with revolutionary innovations that include collage and, of course, Cubism, which broke the stranglehold of representational subject matter on art, and set the tempo for other 20th-century artists. He utterly transformed multiple mediums, making so many works that it’s hard to grasp his achievement.

Still, that hasn’t stopped us from trying with this list of best Picasso paintings and sculptures, scored 1 through 10, with some available to see at NYC’s art museums. 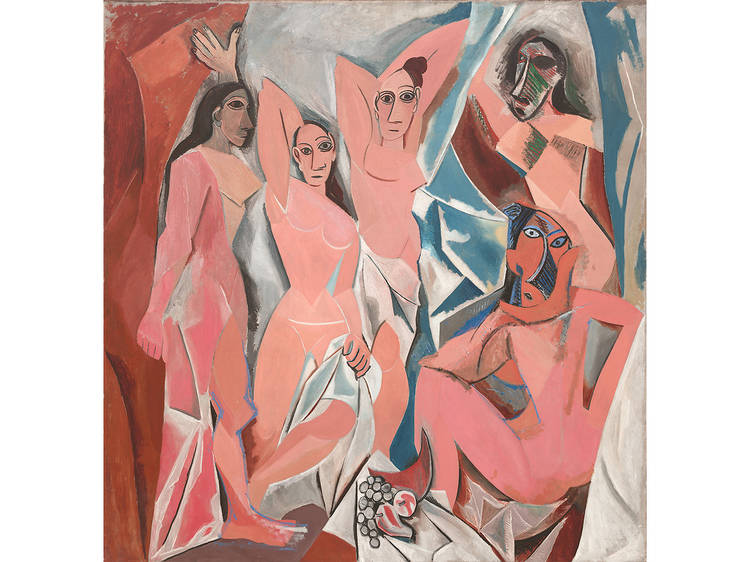 Guernica may be Picasso’s best-known painting, but this one is art history’s greatest rule-breaker. For a half a century before Picasso, vanguard artists had been deconstructing the representational tradition of Western art, but Picasso’s interior scene of a Barcelona brothel delivered the final blow, pointing the way toward the abstract art to come. Raw and primitive, the painting’s style is derived is derived from the African and Oceanic art he saw in Paris’s Musée d'Ethnographie du Trocadéro. 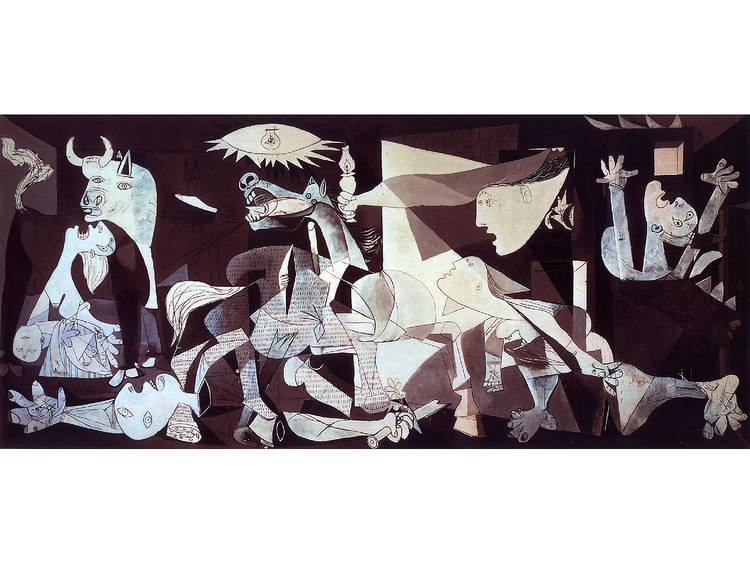 Besides being Picasso most famous painting, Guernica is also one of the world’s most famous and moving antiwar statements. It was inspired by the brutal 1937 bombing of the Basque city of Guernica during the Spanish Civil War. That same year, with war still raging, the embattled Leftist government of Spain commissioned the piece as a mural for the 1937 World’s Fair in Paris. It later toured Europe and the United States, winding up on loan to the Museum of Modern Art in New York with the proviso that it be repatriated to Spain once Generalissimo Francisco Franco—leader of that coup that eventually toppled the Republican government—left power. That finally happened in 1981, six years after Franco’s death in 1975 and eight years after Picasso himself passed away in 1973. In 1974, while still at MoMA, Tony Shafrazi, an artist who later became a gallery dealer of note, defaced the piece with spray paint. MoMA declined to press charges, and was able to restore Guernica because Shafrazi had been prudent enough to use paint that could easily clean off. 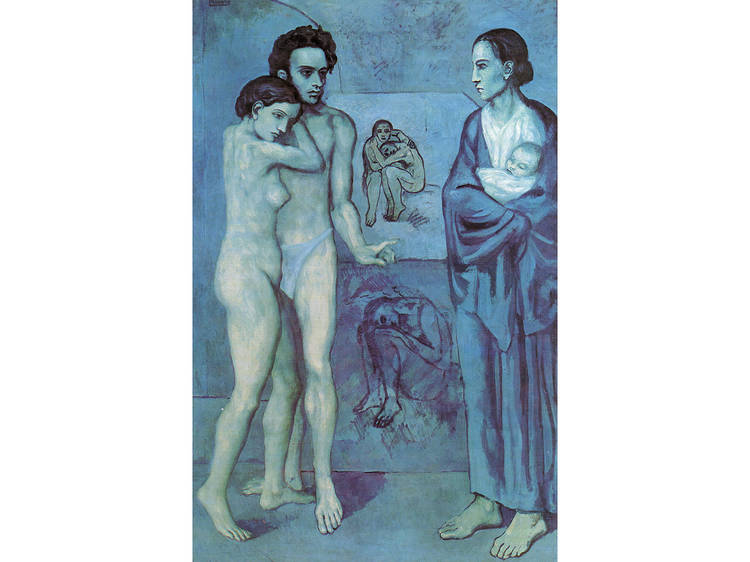 Astonishingly this painting, Picasso’s first masterpiece, was painted early in the artist’s career when he was only 20. The painting is also the greatest of Picasso’s Blue Period compositions, so called because they were limited to a palette of blues and grays and portrayed melancholic subjects. These included the poor, downtrodden and marginal, with whom Picasso strongly identified owing to his own impecunious circumstance at the time. Blue Period paintings were heavily influenced by late-19th century Expressionism, a movement encompassing artists from Edvard Munch to Gustav Klimt. But the influence of El Greco is also immediately noticeable, not only in the color scheme, which often featured into the 17th-century master’s work, but also in the attenuated proportions of the figures, another El Greco trademark. La Vie takes the form of an allegory, but of what, exactly, has been a question that has stumped art historians. It’s believe to have been a response to the death of Picasso compatriot and comrade-in-arms, Carles Casagemas, an impotent depressive who’d committed suicide over his unrequited love for an artist model, Germaine Gargallo, who later became Picasso’s mistress. 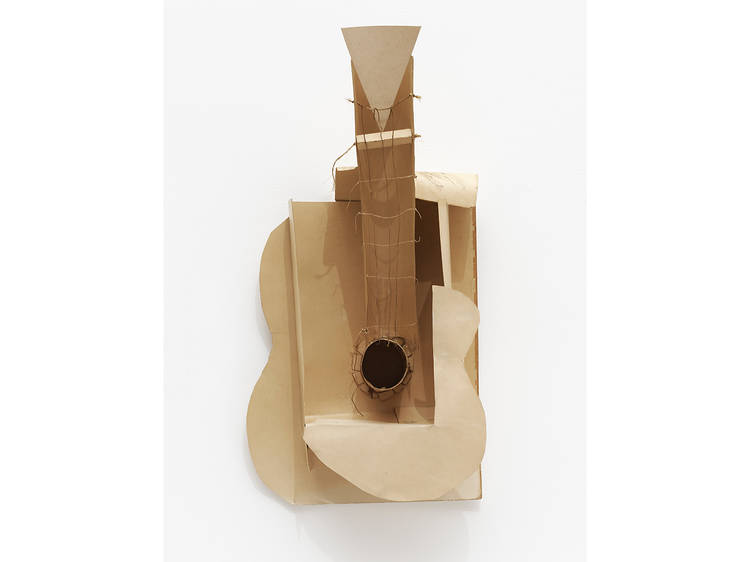 Guitar did for sculpture what Les Demoiselles did for painting: It exploded the medium. Before Guitar, sculpture was a process of creating a form out of a particular material—clay, wax, wood, stone—either by modeling, carving or both. Even casting depended on this first step. But Picasso redefined sculpture as something closer to architecture—an assembly of open, planar components. This idea would continue to reverberate throughout the art of the 20th century and beyond. 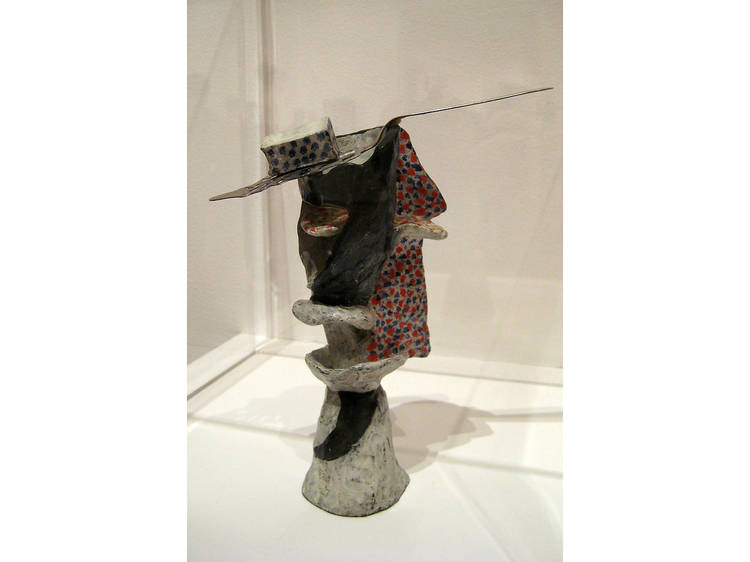 Glass of Absinthe is notable for its use of an actual spoon, taken straight from everyday life without any alteration whatsoever. It’s inclusion was a natural outgrowth of Picasso’s work with collage, but like Duchamp’s Bicycle Wheel of the previous year, it opened up whole new category of found-object assemblage. Duchamp’s ironic intention in bolting a bicycle wheel to a stool—to render functional items useless—was admittedly a universe away from the representational role Picasso assigned his spoon. Still, the latter was just as crucial to narrowing the gap between art and life as Duchamp’s insouciant gesture. 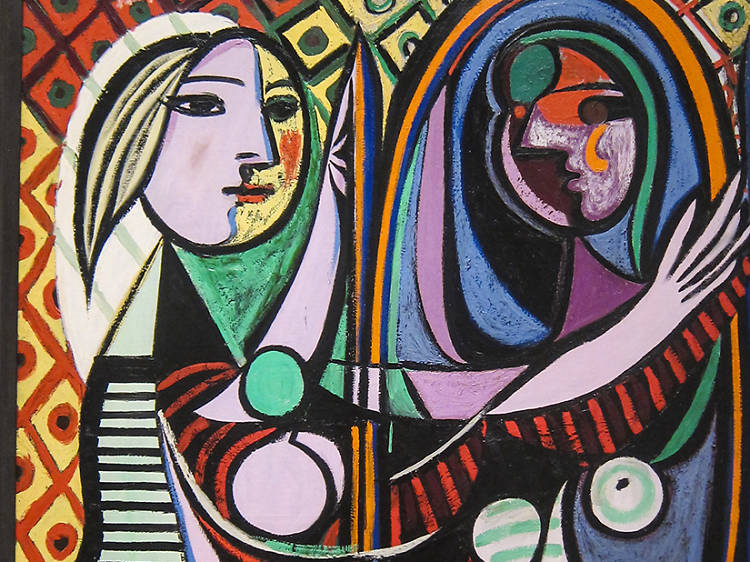 The subject of this painting, a meditation on female vanity and fear of aging, is Marie-Thérèse Walter (1909–1997). who first met Picasso in 1927 when she was 17 and he was a married man of 45. She soon became his mistress and muse, appearing frequently in his works during the following decade. Girl Before a Mirror, however, is the undeniable masterpiece of the lot, depicting the honey-blond, pink-cheeked ingénue as she stares into the dark and distorted abyss of her future self. She’s surrounded by wallpaper in a harlequin pattern that’s meant to evoke one of Picasso’s favorite themes—a metaphor, perhaps, for the artist himself as a ubiquitous presence in Walter’s life. 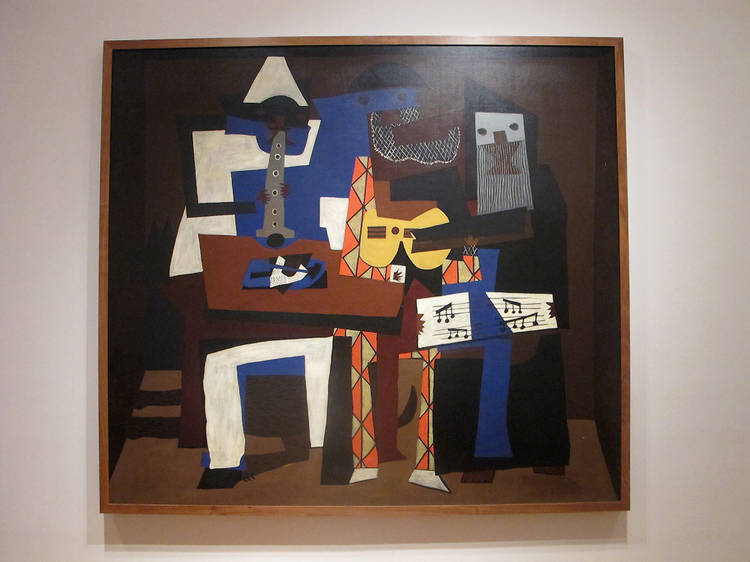 By the early 1920s, Picasso’s years of revolutionary experimentation were behind him, and Cubism had been supplanted as an avant-garde fashion by Surrealism, whose adherents declared Picasso dead. Europe was still reeling from the devastation of World War I, and in France, culture turned to the past in a search for order. Picasso did likewise with this nostalgic look back at the bohemian life of Picasso’s youth in a gentler style of Cubism that pulled away from the more radical approach that preceded it. 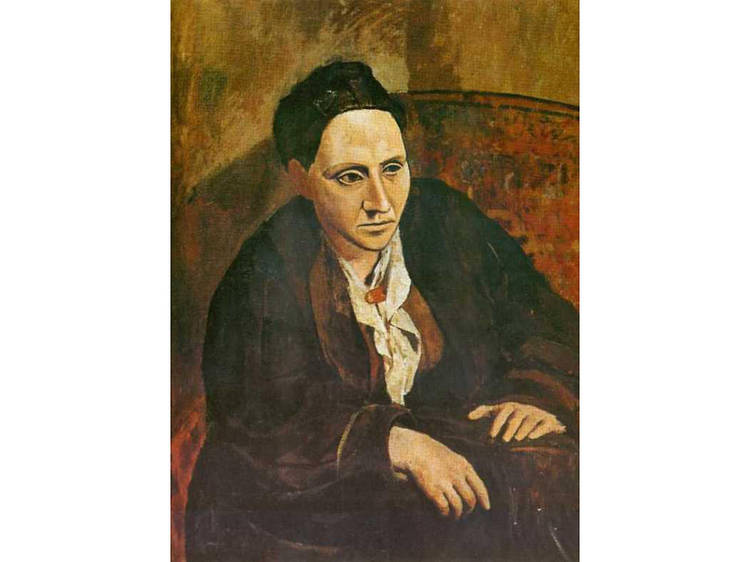 This image of the legendary American expat writer represents the young Picasso’s great turn of fortune. From her very first meeting with Picasso, Stein, who came from a wealthy Pennsylvania family of German Jews, was absolutely certain that he was the greatest artist of his age. She saw in him a kindred spirit—a revolutionary figure bound to alter art forever. She was a crucial benefactor, buying Picasso’s work and convincing her brother to do likewise. She also persuaded key figures such as American artist-gallerist Alfred Stieglitz and French dealer Ambroise Vollard to purchase the artist’s work. More importantly, the painting contains hints of Picasso’s breakthrough into Cubism. 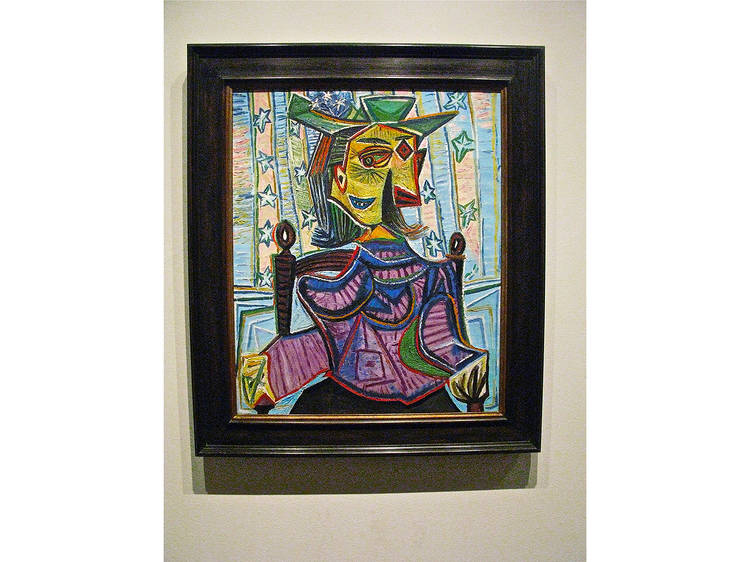 Marie-Thérèse Walter became pregnant with Picasso’s child in 1935, even though he hadn’t divorced his wife, Russian ballerina, Olga Khokhlova and never would. (Khokhlova died in 1955, still married to Picasso.) That same year, Picasso began an affair with Dora Maar, a Surrealist photographer who sometimes modeled for him. Picasso was perfectly happy to juggle Walter and Maar, and one day when they ran into each other in Picasso’s studio while he was working on Guernica, they demanded that he choose between them. He demurred, saying they should work it out themselves. They started to wrestle, a moment Picasso would later describe as one of his choicest memories. Ultimately, Maar reigned as Picasso’s lover, though she was something of a neurotic. Picasso called her “the weeping woman” because of her frequent crying jags. In contrast to the way Picasso painted Walter as a bright, glowing angel, Maar was frequently pictured in darker terms, as in this grimacing portrait that makes her seem slightly unhinged. 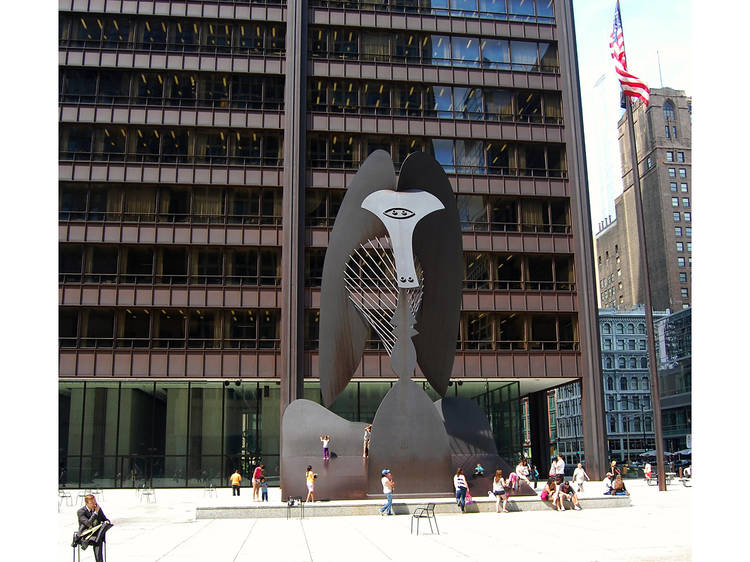 Also known as the Chicago Picasso, this outdoor sculpture standing at Daley Plaza in the heart of the Windy City’s loop is the artist’s best-known public art project. Standing 50 feet high, and weighing 147 tons, this landmark was commissioned in 1963 at a cost of $351,959. Picasso did it for nothing, since he declined the city’s offer of a $100,000 honorarium. Although the figure looks birdlike, it’s actually the bust of a woman, inspired, it is believed, by one Sylvette David, who lived in Vallauris, France, where Picasso kept one of his homes. They met in 1954 when she was 19, and over the years, he drew numerous portraits of her. Unlike most of the women in Picasso life, his relationship with David was platonic—more her idea than his, probably, judging from the title of one work he made of her, The Girl Who Said No. Whatever its origins, the sculpture has become as identified with Chicago as Lake Michigan.