New York City has tons of things going for it, from incredible buildings to breathtaking parks. But surely, the top of the list includes NYC’s vast array of museums, covering every field of culture and knowledge: There are quirky museums and interactive museums, free museums and world-beating art institutions like the Metropolitan Museum. Between them, they offer so many exhibitions, of every variety and taste, that it's hard to keep track of them. But if you’ve starting to suffer a sudden attack of FOMA, fear not! We've got you covered with our select list of the best museum exhibitions in NYC. 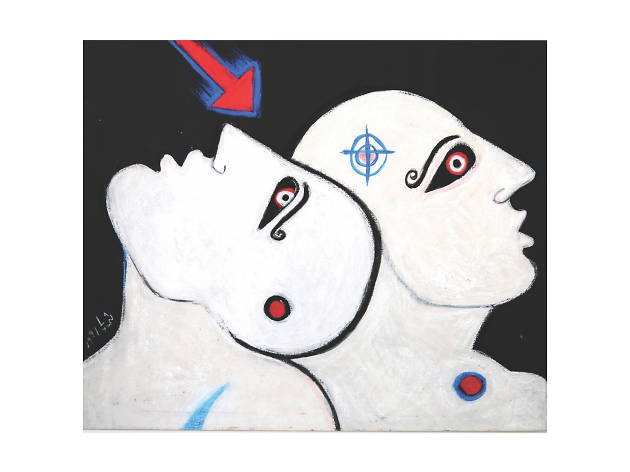 With Turkey’s recent invasion of Kurdish-held Syria, this show, which delves into America’s apparently endless wars in the Middle East, seems especially timely. “Theater of Operations” focuses on the military campaigns against Iraq under the regime of Sadam Hussein, conflicts that eventually led to widespread destabilization across the region, and enabled the rise of ISIS. On view are paintings photos, sculptures and installations by more than 50 artists from Iraq and the U.S., all offering observations on geopolitical crises unleashed by the two Bush administrations. Besides contributions by familiar names such as Paul Chan, Harun Farocki, Thomas Hirschhorn and Guerrilla Girls, the exhibition offers a first exposure for many NYC viewers to artists such as Afifa Aleiby, Jamal Penjweny and Thuraya Al-Baqsami. 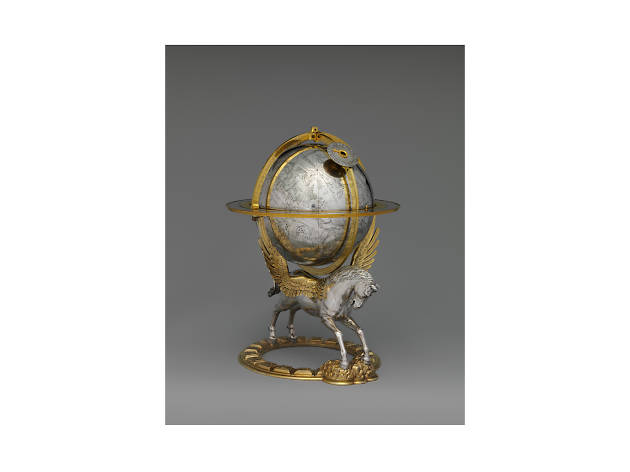 This show covers the centuries between the Renaissance and the Enlightenment, an era of discovery led by figures such as Galileo and Newton. This revolution in knowledge based on empirical evidence attracted the attention of the rich and powerful. Wanting to bask in the glories of latest revelations, they commissioned objects of wonder—made out of precious metals using the finest craftsmanship—meant to reflect the spirit of the age. Some 170 examples of these items (globes, celestial models, chronometers and other devices often animated by clockwork mechanisms) are on display. 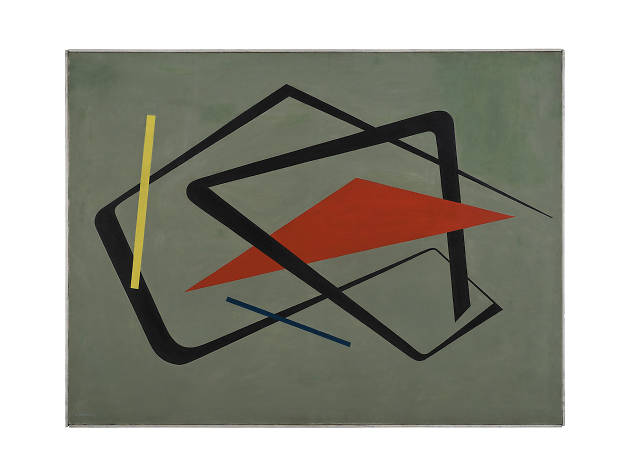 Midcentury Latin America was a hotbed of modern art thanks to a roster of artists—Lygia Clark, Gego, Raúl Lozza, Hélio Oiticica, Jesús Rafael Soto—who weren't well known in New York until fairly recently. MoMA fills in the gaps with this survey of objects from that period, which were given to MoMA over the years by Patricia Phelps de Cisneros, a collector whose holdings of Latin American abstract art are one of the most important in the world. 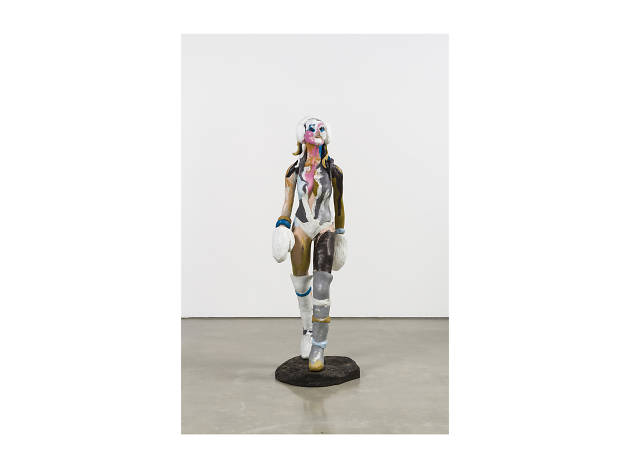 Since the mid-1990s, Rachel Feinstein has been primarily occupied with figurative sculptures centered on the female figure and its place in art history, religion, fantasy and fairy tales. Feinstein unpacks how women have been shaped through a public imagination that often reduces them to black-and-white binaries such as Madonna/whore, or more recently, working woman/stay-at-home mom. Her pieces, hybrids of painting and three-dimensional form, take their visual cues from Baroque art, kitsch, and other styles that lean in on theatricality or sentimentality. This show at the Jewish Museum represents her first in an institutional setting. 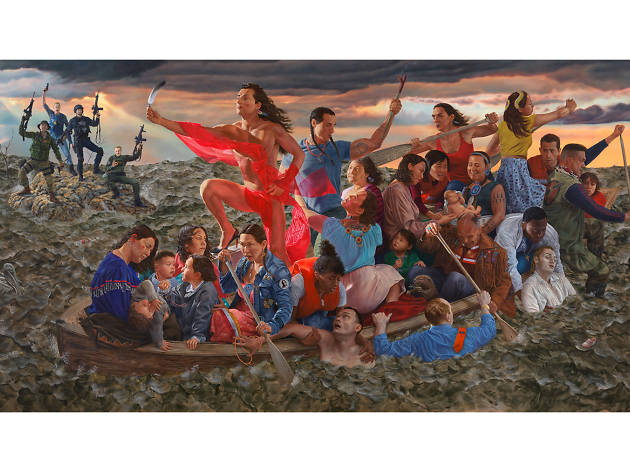 For a while now, The Met has been asking contemporary artists to create a project for its majestic main hall—presumably a daunting proposition since any artwork would have to compete with the splendor of the place. A Cree painter from Canada, Kent Monkman is the latest artist to give it a shot, and his effort isn’t shy about grabbing your attention. Monkman is known for sending up the grand tradition of European History painting by substituting the heroic white figures that usually populate such compositions with people of color and LGBTQ folk. Here he provide two massive canvases that weigh in on the subject of immigrants looking for a better life while being tossed on the stormy seas of history. 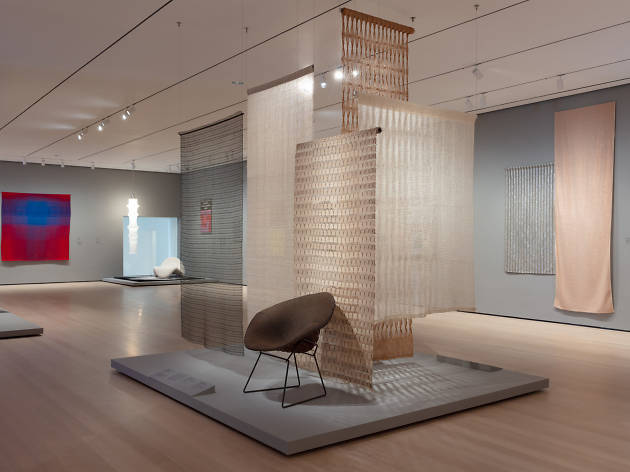 Textiles as both art and craft form the warp and woof of this survey of the fiber medium from ancient times to the present. 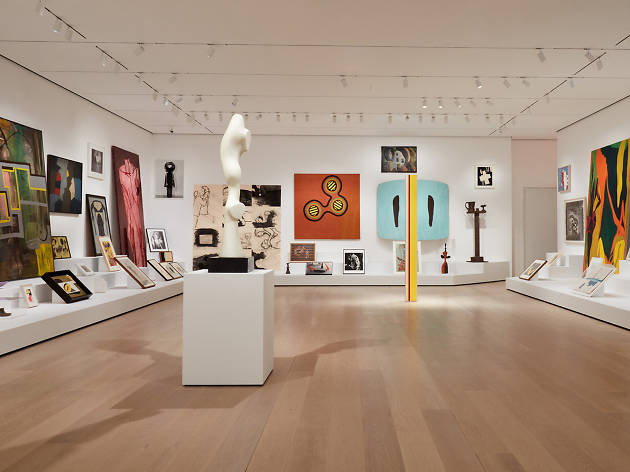 On view are 75 works from MoMA’s collection chosen by the painter Amy Sillman to elucidate the role of shape in the creation of art. Jasper Johns, Kiki Smith and Marcel Duchamp are among the names included in this selection, which is presented in a kind of modified salon-style installation. 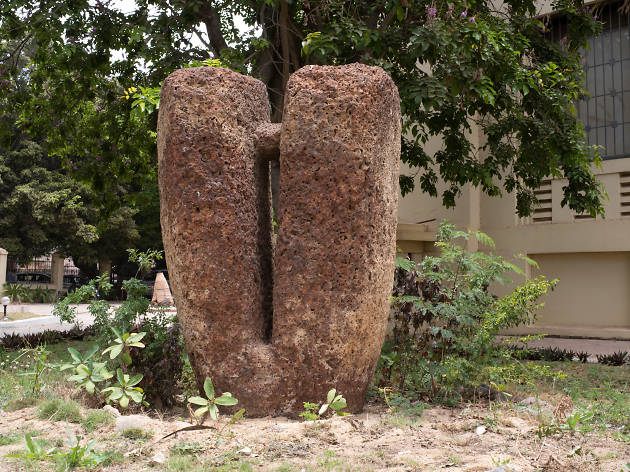 Encompassing modern day Senegal, Mali, Mauritania and Niger, the African region known as the western Sahel lies just south of the Saharan Desert, and it was there that a succession of mighty empires rose and fell between the Second and 19th centuries. Made wealthy and powerful by a network of trade routes that ran through the area, these dominions developed a rich visual culture which is now being given a showcase in this selection of 200 objects that includes sculptures in wood, stone, fired clay, and bronze; objects in gold and cast metal; woven and dyed textiles; and illuminated manuscripts. 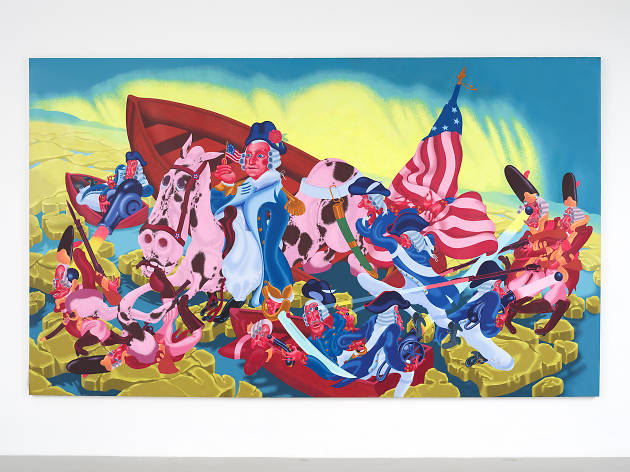 Even after six decades, Peter Saul at 85 is still taking names and kicking ass with satirical paintings done in an inimitable, Pop-Expressionist style that wed cartoonish caricature to loud, acid colors. His savage send-ups target political figures and art-historical icons alike. Never fitting in with any particular group or movement, Saul forged his own path, channeling Mad Magazine through Matisse. 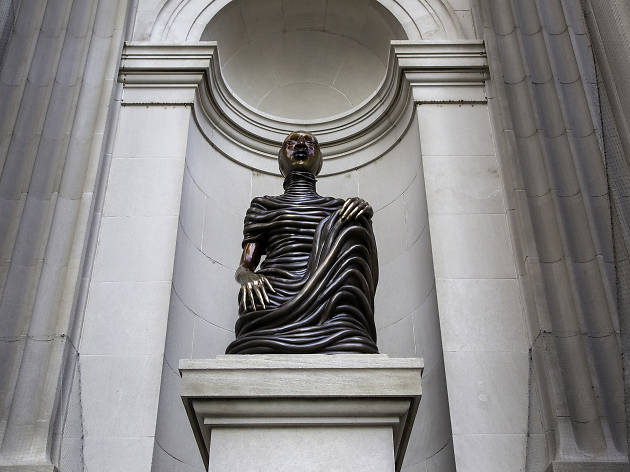 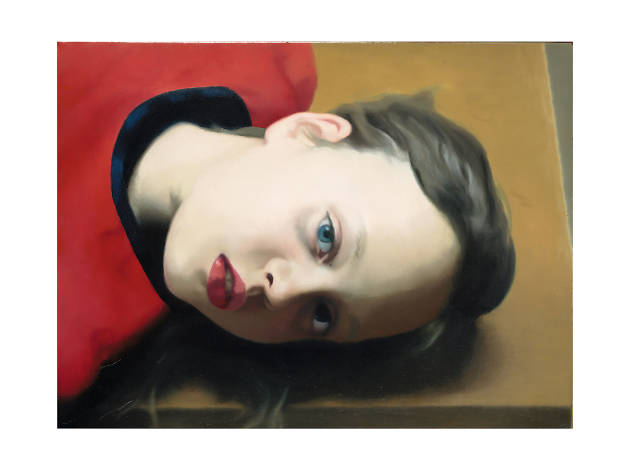 One of the greatest (if not the greatest) artists of the last 60 years, Gerhard Richter has explored the relationships between representation and abstraction, painting and photography, history and memory, and—dare one say?—good and evil. That he has done so with no small amount of ambiguity, and ambivalence towards the medium—painting—with which he is most associated, has yielded work that is as confounding at times as it is breathtakingly beautiful. Yet despite its equivocal nature, Richter’s work also draws on his personal experience as a German who lived through the Third Reich, and dealt with its consequences. This show takes the measure of his achievement in the first major NYC survey of his career in 18 years. 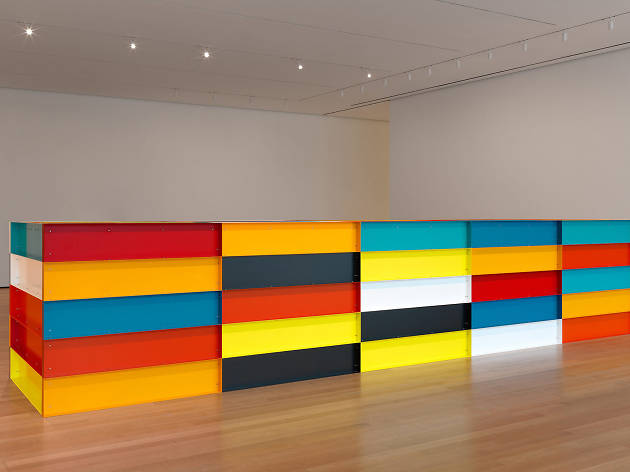 The fact that the title of Donald Judd’s MoMA retrospective is last name only speaks to his enormous place in postwar art. Minimalism as we know it would have been inconceivable without him: He pioneered the form in the early 1960s with his signature boxes, and introduced the idea to interior design through his forays into furniture and the design of his own studio/living quarters, which took up an entire Soho loft building. Also, he put Marfa, Texas on the map as an art center when he bought up nearly all of the buildings in town and turned them into exhibition spaces. 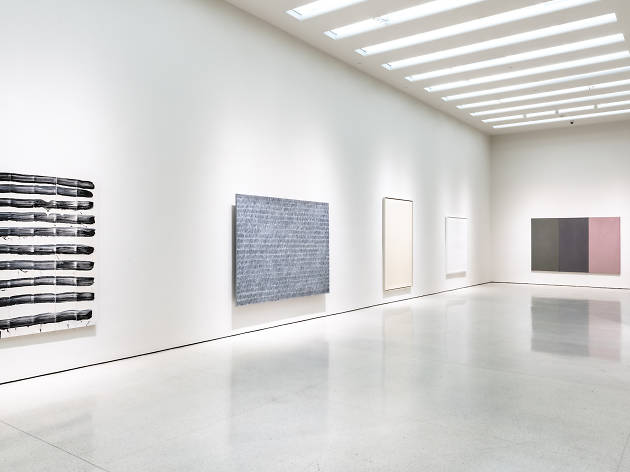 An offshoot of Minimalist abstraction, Process Art emerged during the 1960s and ’70s with the notion that the ways in which artworks were produced (i.e. their process) could serve as subject matter. This exhibition focuses on a group of painters, including Agnes Martin, Roman Opałka and Park Seo-Bo, who laid out pencil or brush marks, pinholes—and even numbers—in a systemic fashion that made their methods obvious for viewers to see. 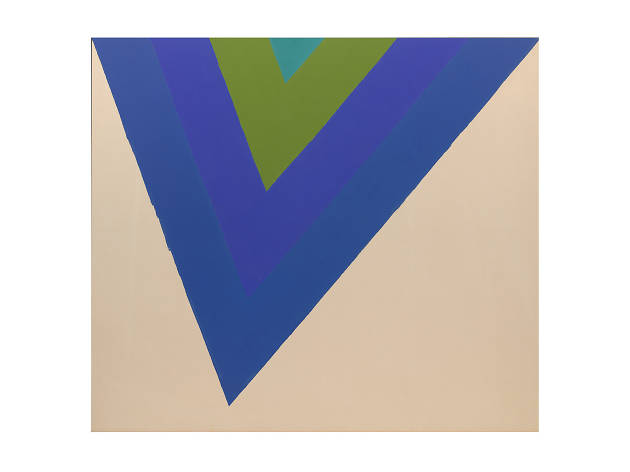 By the late 1950s Abstract Expressionism had run its course, while its core tenet—that painting through gestural brushwork constituted a kind of existential theater with the artist as star—had hardened into orthodoxy. Representational styles like Pop Art emerged in reaction, but there remained a group of painters committed to abstraction who looked for a fresh approach. They found it through an emphasis on color achieved by soaking thinned pigments into the canvas instead of slathering it on the surface. Variously called Lyrical Expressionism or Color Field painting, the style was championed by New York art critic Clement Greenberg (whose previous writings on Pollock, De Kooning, et al. were instrumental in boosting AbEx) though its impact was largely confined the early 1960s. This exhibition revisits that period with works by key figures of the time such as and Morris Louis, Kenneth Noland and Jules Olitski. 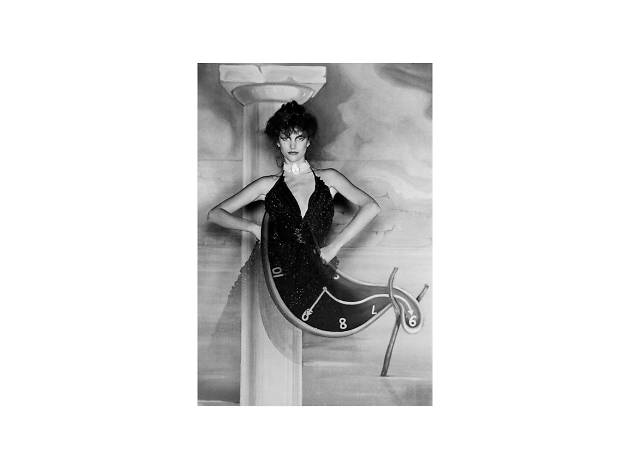 The Metropolitan Museum is celebrating its 150th anniversary this year, and in light of all of those years passing by, the Costume Institute is mounting this exhibition about fashion’s relationship with time. The show explores how fashion’s history is both linear and cyclical: On the one hand, there’s no more reliable marker for a particular period than the clothes being worn at the time; yet on the other hand, fashion itself often looks to the past for inspiration. The Met reaches into its vast collection to explore how fashion often moves forwards by moving back. 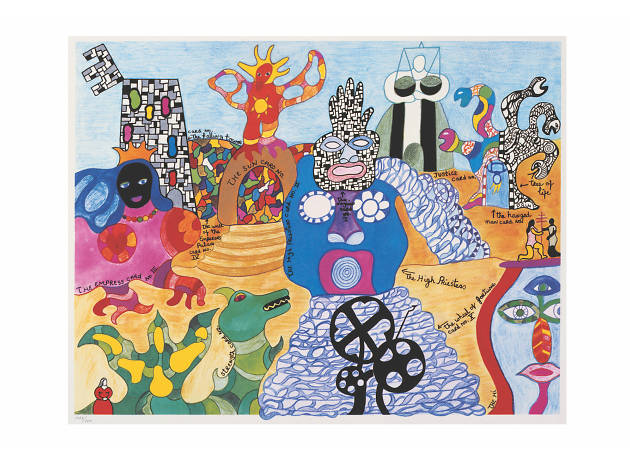 Combining Pop Art and feminism, Niki de Saint Phalle was a midcentury French-American artist who was also one of the few women sculptors to work on a monumental scale. One of her notable works was the waist-down half of giant female figure on her back with her legs spread to reveal a vagina-shaped opening that crowds of visitors could enter. She also “painted” by shooting a gun at pockets of paint concealed behind canvas, which would then bleed out various colors.

More on museums in NYC 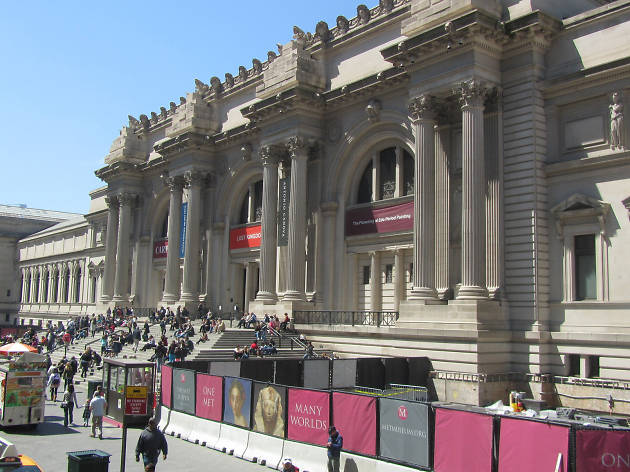 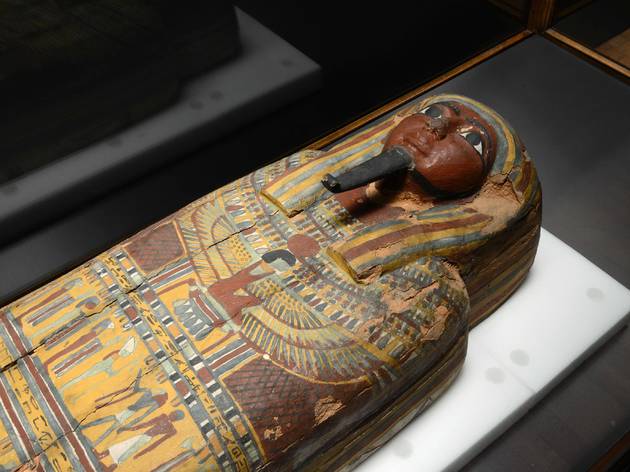