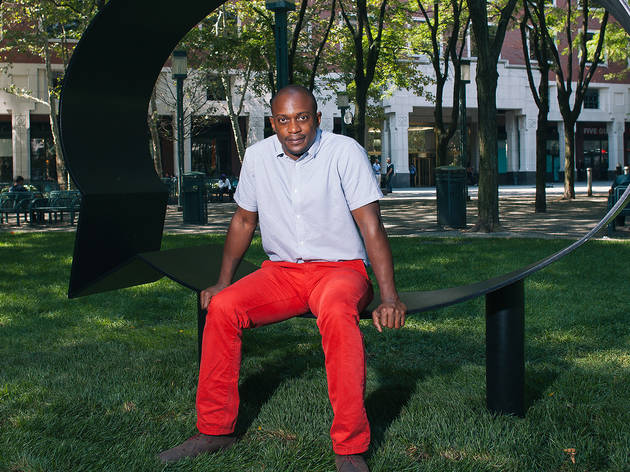 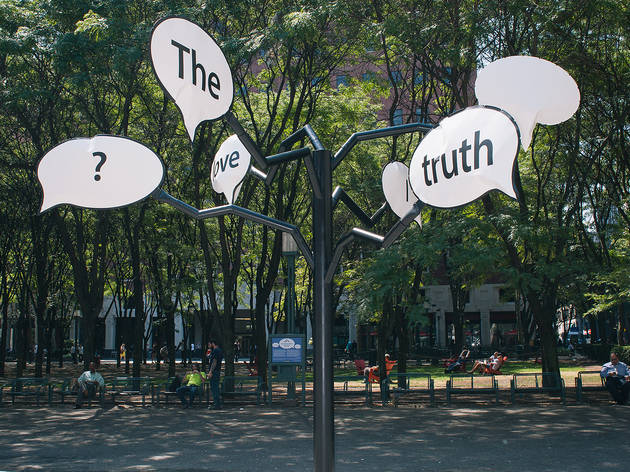 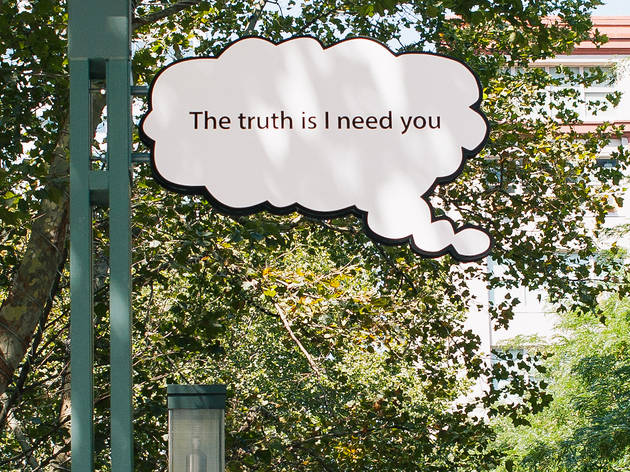 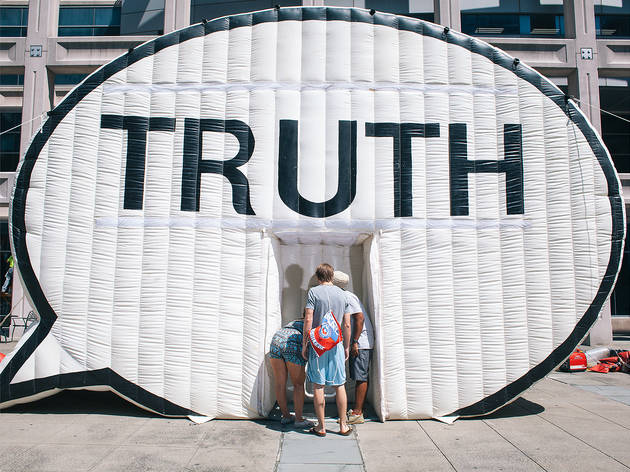 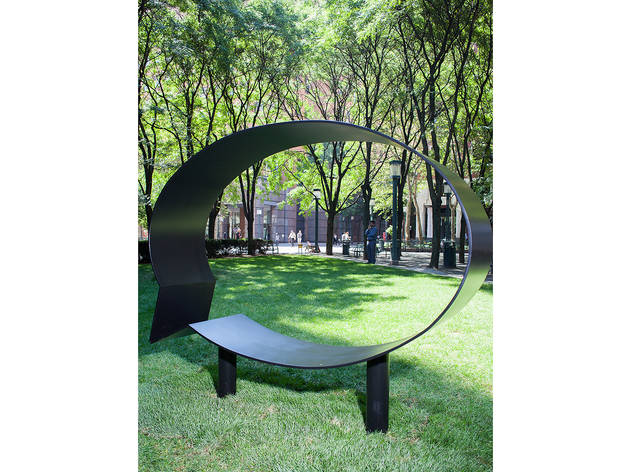 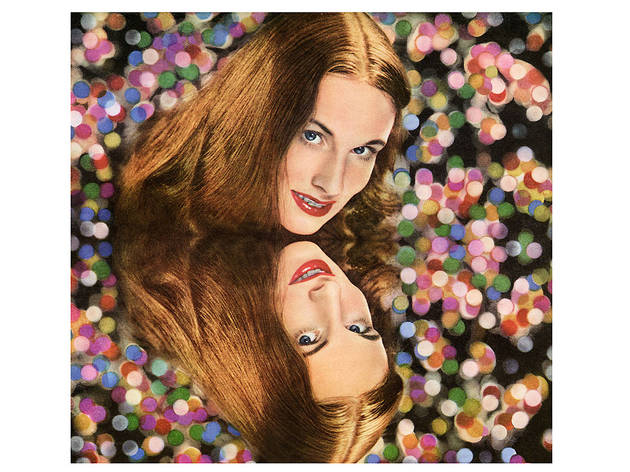 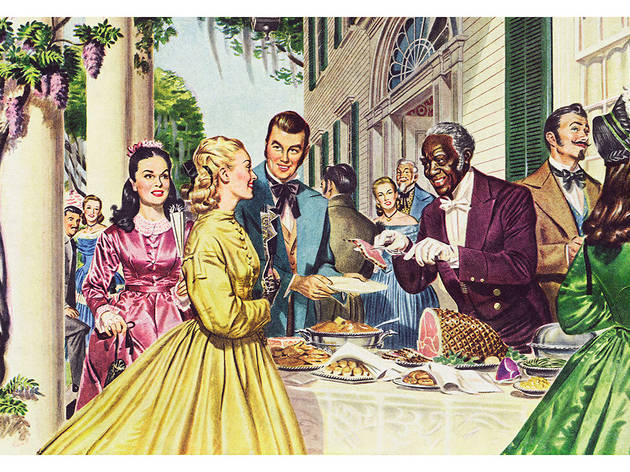 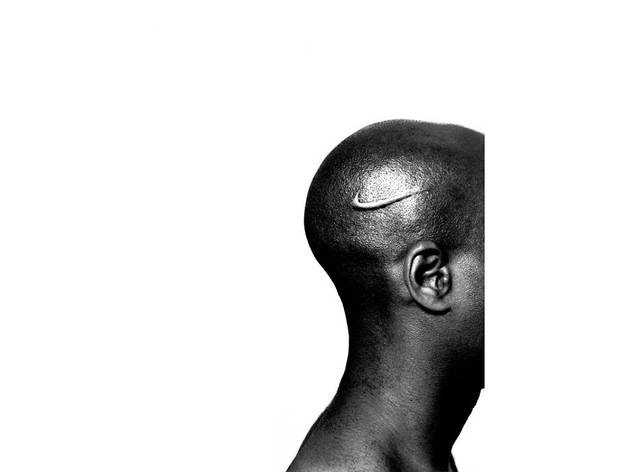 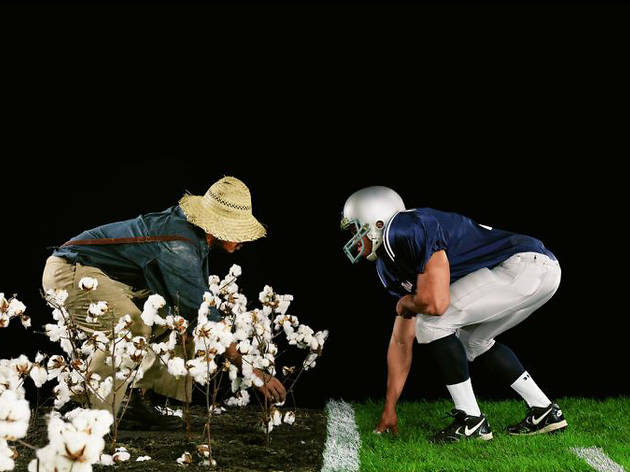 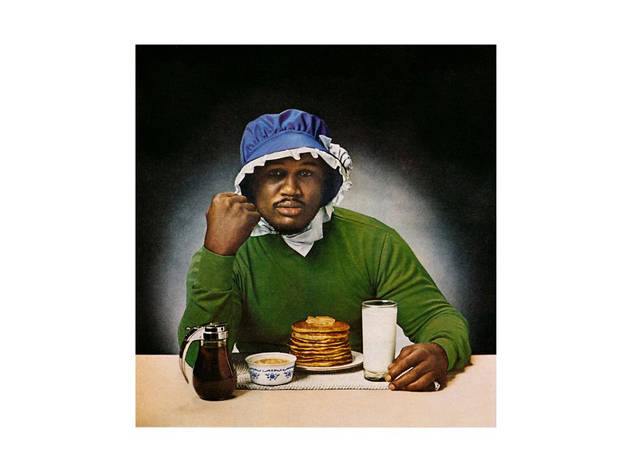 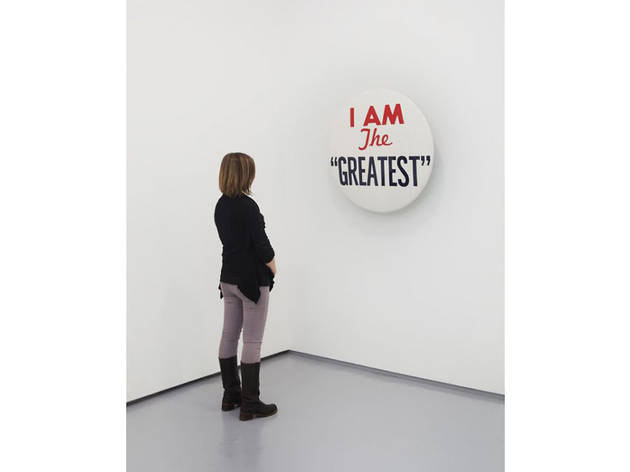 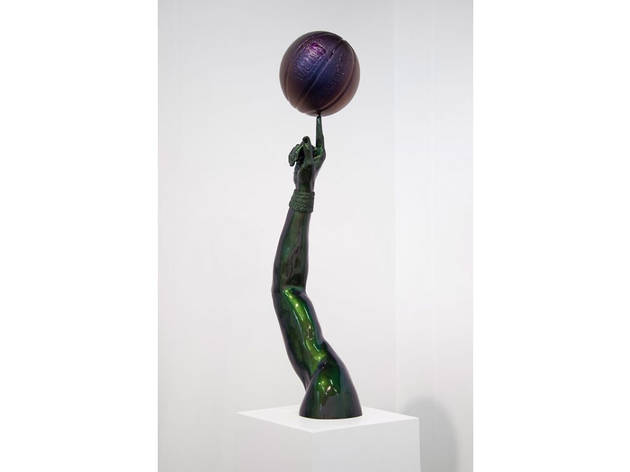 The old saying, “truth is in the eye of the beholder,” is taking on a literal meaning thanks to Hank Willis Thomas’s public artwork for Brooklyn’s MetroTech Commons, “The Truth Is I See You.” The outdoor art project consists of several components, beginning with a series of signs shaped like cartoon-speech bubbles hung on lampposts. Each carries a phrase beginning with, “The truth is…,” followed by, “I love you, I hear you, etc.” in a variety of languages. Another set of much larger outline bubbles set on the ground serve as park furniture. There’s also a flatscreen playing videos of people from around the world, telling their stories by beginning with “The truth is….” These testimonials come courtesy of the Truth Booth, a collaboration between Thomas and Cause Collective. A roving confessional in the form of a giant speech-bubble inflatable, it’s equipped with a camera and will make three appearances at MetroTech throughout the show. Over coffee, Thomas talked about origins of the piece, his practice and how an early work was inspired by a family tragedy.

Is it fair to describe your work as a critique of the way African-Americans are portrayed and shaped by the media? I’m thinking of pieces such your image of a black man with the Nike swoosh branded on his shaved head.
I’ve done a lot of stuff about the imaging of African-Americans in pop culture and history, but I’d say I also have done a lot of work that’s totally unrelated to that. And in a lot of my very early work, I was wrestling very specifically with the murder of my cousin.

That’s terrible. How did it happen?
He went to a club with two friends who were wearing diamond and platinum chains. They were robbed, and the guys who did it made my cousin lay face down and shot him in the back of the head.

Why?
I don’t know. My roommate at the time said that the worst part was that we didn’t have to ask whether the killers were black.

So how does all of that factor into your Nike swoosh piece?
While I was a kid growing up in New York, a lot of black men were getting killed over Air Jordans and such. I began thinking about how our ancestors were brought here as commodities, and now, our people are killing each other over sneakers. A lot of that was the result of multinational corporations making money by marketing black bodies.

Is the MetroTech project also inspired by personal experience?
Yes. In 2006, I participated in a residency upstate, which focused on international artists. It was during the Israel-Hezbollah war, and the residents included an Egyptian, a Lebanese-Palestinian and an Israeli. When war broke out, they seemed to go to opposite sides of the room. But after a week or so, you’d see them talking to each other, sharing news. I realized they were the only people with skin in the game, so I said, Let’s play a game of telephone. The Egyptian person started it off by whispering an Arabic word into the next person’s ear. Most everyone else couldn’t speak Arabic, but it still came out sounding like in Arabic.

What was the reaction?
The Israeli said, ‘That’s funny, that sounds like a product in Israel. It’s amazing that our countries are at war, but commerce still takes place.’ Her observation was a revelation for me: That people who were enemies could share a bond no one else understood. So I started to imagine star-crossed lovers on opposite sides of the wall they were building in Jerusalem at the time, where one screams, ‘The truth is I am you in Hebrew,’ while the other screams, ‘The truth is I love you in Arabic.’ But all anyone else can hear is screaming. So I used phrases like those for a series of helium-filled speech-bubble balloons I made for Socrates Sculpture Park. That’s how it started.

A lot of the speech-bubble signs you’ve put up here are in different languages.
Yes, we took the 22 most spoken languages in Brooklyn—Yiddish, Haitian Creole, Serbian, Urdu, etc. And under each sign in another language, there’s a placard that shows you how pronounce what the sign says phonetically in English. The idea is that if you can learn to say just one thing in someone else’s language, it would bridge a gap.

The way the speech bubbles are hung overhead, they look like the words are coming out from people beneath them.
Yes! It’s awesome to see things like a couple sitting under one saying, ‘The truth is I balance you,’ and they don’t even notice it.

I bet a lot of selfies will be taken with them. Let’s talk about the Truth Booth. It seems to be a big part of the project, but it’s only here for brief intervals, because it travels around the world. Where has it been?
We started out in Ireland, which was great because it’s a Catholic country and the project is sort of like a confessional. Then it went to Afghanistan during the country’s election. So it was a time there when people felt a real urgency to speak their minds.

How many people have used it?
In Ireland, we got 1, 000 people in one week. At Miami Art Basel, 1,300 people went through it. It’s an attention-grabbing thing.

That’s true. What drew you to mounting the project at MetroTech?
I just love how people use the space. I’d been coming down here on and off for 20 years, and now I live just around the corner.

In one of those new high-rises?
Right, in of those towers I used to despise.

But you don’t anymore.
I mean, it’s gotten as expensive here as Manhattan, so I figured if you can’t beat them, look down on them.

Since you mention how expensive Brooklyn has become, what do you say to the criticism that public art can aid and abet gentrification, and that money could be better spent on practical services?
Well, I think it’s kind of an insult to say certain people don’t deserve beauty, because beauty is a basic service. And everyone’s attracted to beauty—rich people, poor people and everyone in between. The hope is that everyone will feel welcome regardless of whether you have five dollars in your pocket or $5 million in the bank.

Hank Willis Thomas, “The Truth Is I See You” is at MetroTech Commons through June 3.

The main component of Thomas’s sprawling project for the MetroTech Commons is made up of cartoon speech bubbles set high on lampposts running down the Myrtle Street promenade. Written in all of the languages spoken in Brooklyn (22 in all), each is printed with a phrase that starts with “The truth is….”