It’s summer in the city, which means the hoards of tourists coming here is in inverse proportion to residents desperate to flee, even if only for the day. Usually that means hitting the beach, but why settle for the ocean when you can combine a short trip out-of-town with a taste of art? You’d be surprised what you can find within a four-hour drive from here. To get you started, here are our suggestions for places to visit. Bon voyage!

RECOMMENDED: All of the best day trips from NYC 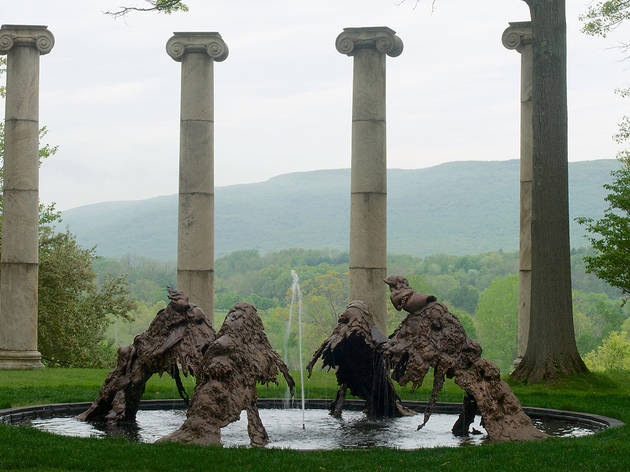 This 500-acre landscape of fields, hills and woodlands is home to one of the finest sculpture parks anywhere, boasting a collection of more than 100 outdoor works by some of the biggest names, including Louise Bourgeois, Mark di Suvero and David Smith. Temporary exhibitions are also on offer this summer, including a series of fountains by Lynda Benglis and a sort of Nazca Lines-inspired earthwork by Luke Stettner. 1 Museum Rd, New Windsor, NY (stormking.org, 845-534-3115) 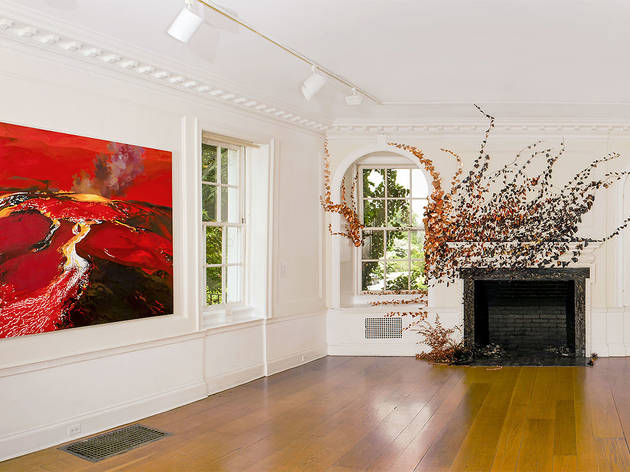 A 28-acre public garden and cultural center in the Bronx overlooking the Hudson River and Palisades, Wave Hill offers many natural pleasures, including a magnificent stand of pines, a formal garden and a hiking trail running through the woods. But there’s also art, which can be found on the grounds or in Wave Hill’s main space, the Glyndor Gallery. There are also additional exhibition areas, including the Sunroom Project Space and Wave Hill House. The latter is hosting artist Abbie Zabar’s drawings of the various flowers that populate the Great Hall of the Metropolitan Museum of Art. W 249th St and Independence Ave, Bronx, NY (wavehill.org, 718-549-3200) 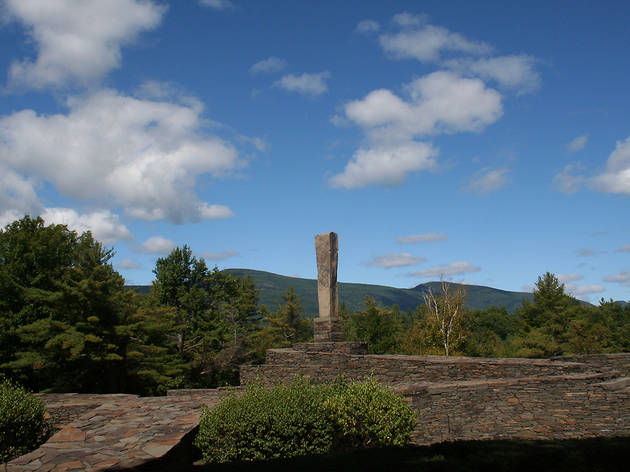 Generally thought of as one of the earliest examples of Earth Art, art, OPUS 40 is a wonder to behold: The work of one man, Harvey Fite, who labored on the piece for 37 years, starting in 1938, when he purchased an abandoned quarry in Saugerties, New York (best known as the site of Woodstock). The result is a winding “total artistic environment” comprising six-and-a-half acres of bluestone blocks fitted together with a technique Fite borrowed from ancient Mayan temples. In fact, Opus 40 resembles nothing so much as mysterious edifice left by a forgotten civilization or, perhaps, extraterrestrial visitors. The grounds also include a museum devoted to quarryman tools that Fite found around the site. 50 Fite Road, Saugerties, NY (opus40.org, 845-246-3400) 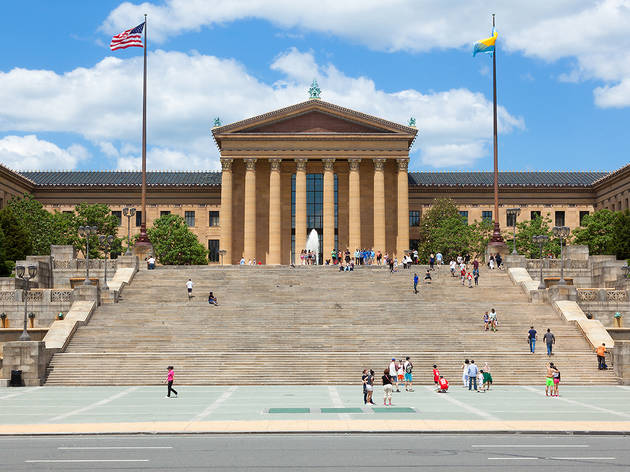 It’s not every institution that can claim an association with Sylvester Stallone and Marcel Duchamp, but Philly’s premier museum is able to do just that. Thousands of visitors come each year just to snap their picture on PMA’s “Rocky” steps as the entrance is now known thanks to its appearance in the movie that launched Stallone’s career. As for Duchamp, the museum owns two of his enigmatic masterpieces “The Large Glass” and “Étant donnés,” which you could say respectively represent the Mona Lisa and Sistine Ceiling of 20th-century Conceptual Art. The museum is just as renowned for its other holdings, which, like The Met’s in New York, is encyclopedic in scope. Lovers of Impressionism should definitely make a point of visiting “Discovering the Impressionists: Paul Durand-Ruel and the New Painting,” which explores the role Parisian dealer Paul Durand-Ruel played as one of the first figures who promoted Impressionist works. The show, which features such fan favorites as Degas, Manet, Monet and Renoir runs June to September. 2600 Benjamin Franklin Pkwy, Philadelphia, PA (philamuseum.org, 215-763-8100)

The Philadelphia Museum of Art 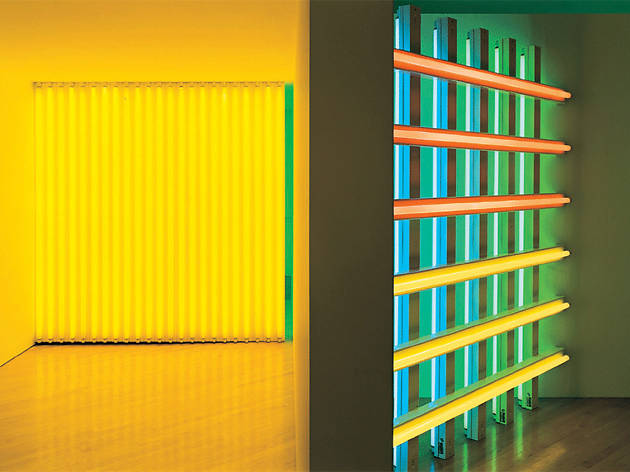 Located in an old firehouse that also once housed a Baptist church, The Dan Flavin Art Institute is one of several artist-project sites maintained by the Dia Art Foundation across the country. It is, as the name suggests, dedicated to Dan Flavin (1933–1996) the sculptor known for creating spectacularly colorful installations out of fluorescent light fixtures. Some of his earliest works, a series dating from 1961 to 1964 called “Icons,” is currently on view. The Dan Flavin Art Institute also mounts exhibitions of other artists’ work. Corwith Avenue off Main Street, Bridgehampton, NY. (diaart.org/sites/main/danflavinartinstitute, 631-537-1476)

One of the most interesting things about the live/work homestead shared by AbEx great Jackson Pollock and his wife, the painter Lee Krasner, is how small the studio that birthed Pollock’s game-changing “drip” paintings actually is: The floor on which Pollock spread out his canvases to make his paintings is only barely larger than the works themselves (for comparison, one of Pollock’s larger compositions, One: Number 31 (1950), measures roughly nine by 18 feet). The House is a modest cedar-shingled affair typical of the old fishermen residencies that still dot the Hamptons, as is the adjacent barn that contains the studio. There, you’ll find a display of artifacts—Pollock’s paint-splattered shoes, paint cans and brushes—and of course, the aforementioned floor, which retains the spattered vestiges of some of history’s most famous artworks. 830 Springs-Fireplace Road East Hampton, NY (sb.cc.stonybrook.edu/pkhouse, 631-324-4929) 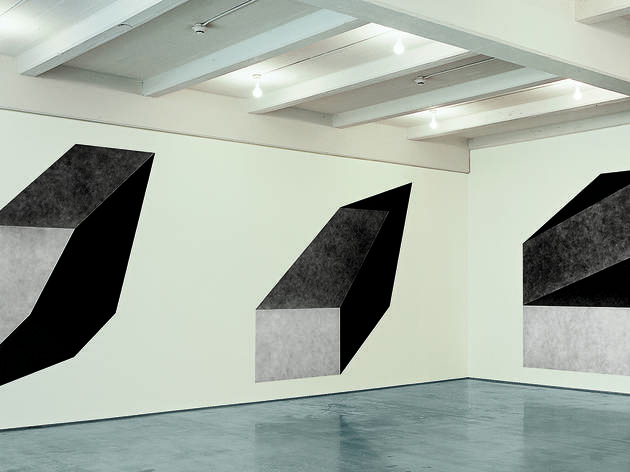 The aptly name Dia: Beacon is indeed a signal destination for fans of contemporary art—or anyone else, for that matter. Located just up the river from New York in Dutchess County, Dia: Beacon (which is housed in a 300,000-square-foot facility that was once Nabisco’s box printing factory), serves as the sprawling showcase for the Dia Art Foundation’s unparalleled collection of Minimalist Art. It also features temporary exhibitions by some of today’s leading artists, including California Light and Space artist Robert Irwin, who has an environmental installation now on view. 3 Beekman St, Beacon, NY (diaart.org/sites/main/beacon, 845-440-0100) 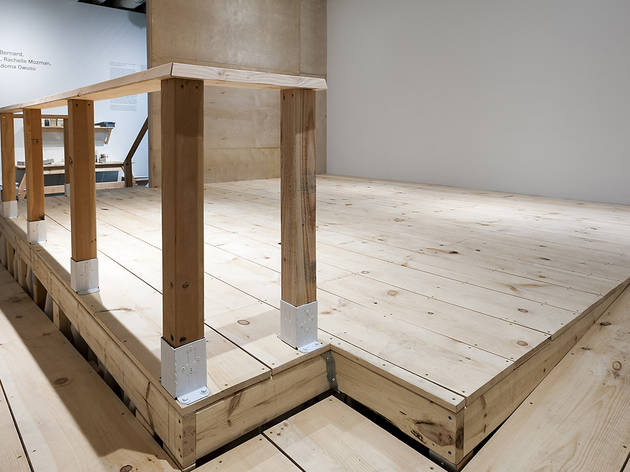 If you looking for the latest in contemporary art while you’re in Philly, check the ICA, which showcases work by some of the brightest lights working today. Among the shows running through August, there’s Barbara Kartsten’s color photos from the 1980s, featuring sculptural abstract forms and mirrors assembled into garishly lit tableaux that look like spooky, surreal stage sets. 118 S 36th St, Philadelphia, PA (icaphila.org, 215-898-7108) 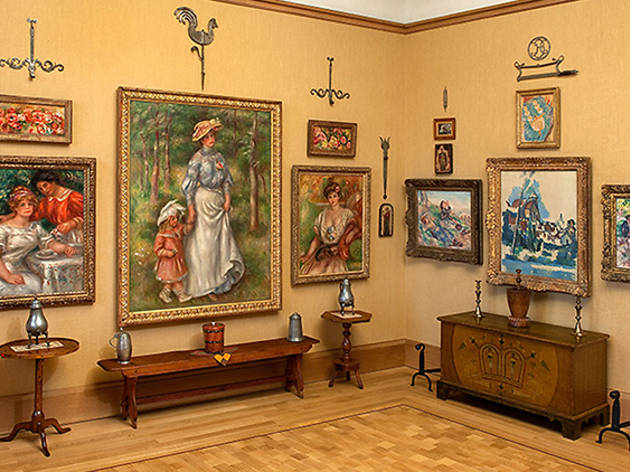 The Barnes Foundation describes itself as “the greatest private collection of post-impressionist and early-modern art” and its hard to argue with that, not only because their holdings of Cézannes, Matisses, Picassos and Renoirs represent quality but also quantity, with the Renoirs alone adding up to 181 pieces. Originally housed in the stately home of founder Albert C. Barnes in nearby Merion, PA, the collection relocated in 2012 to a new building in Philadelphia designed by Williams and Billie Tsien, the same team behind behind the now lost American Folk Art Museum. The original Merion location remains open to the public and features a 12-acre arboretum. 2025 Benjamin Franklin Pkwy, Philadelphia, PA (barnesfoundation.org, 215-278-7000)

The Barnes Foundation, The Order of Things 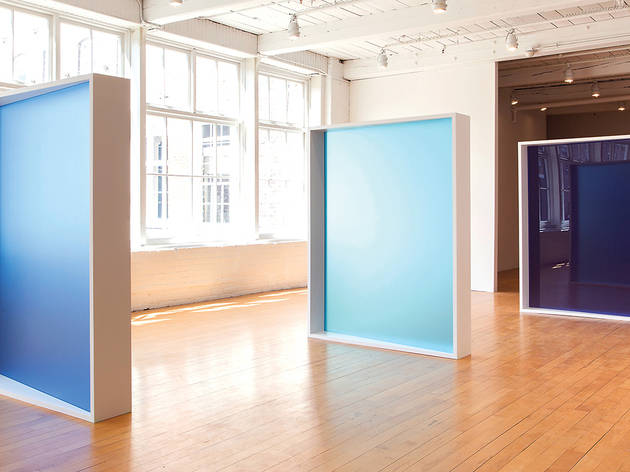 Located in North Adams, Massachusetts amid the rolling countryside of Berkshire County, Mass MoCA takes up a rambling complex of former 19th-century factory buildings spread across 13 acres. Nearly 200,000 square feet is given given over to exhibition space for contemporary art, but that’s not all: There’s an 850-seat theater, an outdoor concert area that can accommodate upwards of 9000 people, plus an amphitheater, various rehearsal studios and artists’ workshops. That’s all on top of additional 200,000 square feet of space for “commercial tenants in creative industries.” In other words, there’s a lot of room for stuff to happen and it does with numerous shows, performance events, films and concerts. Current and upcoming shows for June and July include paintings by Francesco Clemente and a 140-foot-long sculpture of birds made up of thousands of buttons and pins by Korean artist Ran Hwang. 1040 Mass MoCA Way, North Adams, MA (massmoca.org, 413-662-2111) 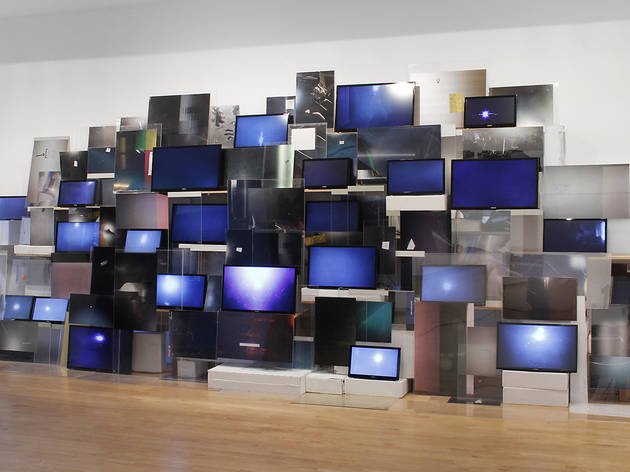 The Fall Leaf-peeping season is the time most people think of going to Ridgefield, CT, but summer is just as lovely, and it’s worth the trip just to visit this museum devoted to contemporary art—one the first of its kind in the country. It was founded in 1964 by fashion designer Larry Aldrich (1906–2001), who sold his collection of Picasso, Miró, Chagall, Paul Klee among others to pay for the property: A former church and general store dating from the 18th century. A major renovation and expansion opened in 2004. The museum offers a roster of multiple exhibitions, with the highlights this summer being shows by artists Nancy Shaver and B. Wurtz. 258 Main St, Ridgefield, CT (aldrichart.org, 203-438-4519) 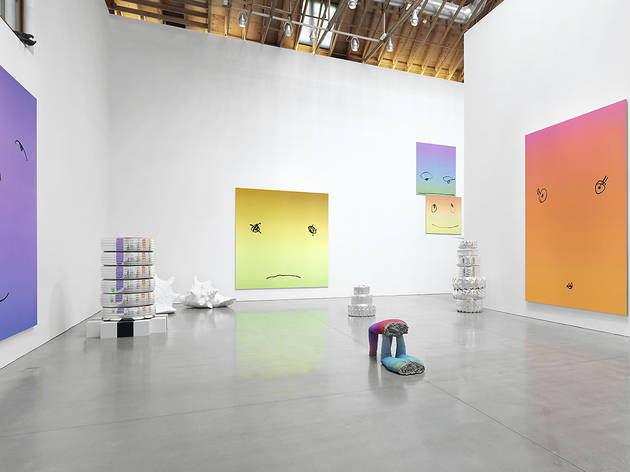 Besides being the owner of such publication as Interview and Art In America, Peter Brandt, whose name is on the door here, is probably best known for his on-again, off-again marriage to former supermodel, Stephanie Seymour, which has landed the couple in the tabloids. Still, Brant is one of the art world’s biggest collectors, big enough that he started his own museum in 2010 dedicated to artists he loves (most of whom qualify for the bad-boy label) such as Urs Fischer, Dan Colen and Rob Pruitt—who is the subject of the The Brant Foundation’s current show. Visiting is by appointment only, but if you’re looking for recent trendsetters in art, this is a good place to start. 941 North Street, Greenwich, CT (brantfoundation.org, 203-869-0611) 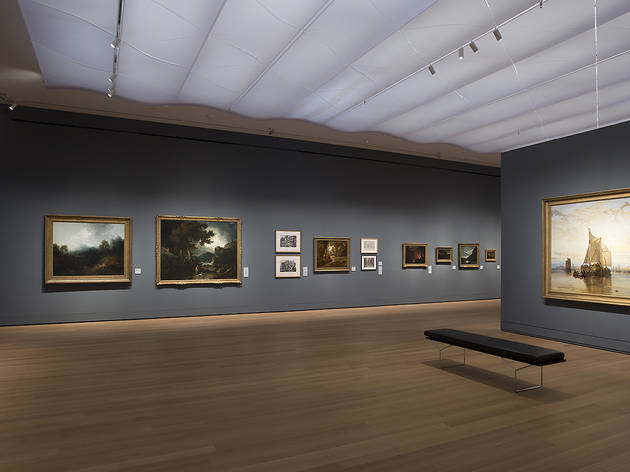 The Yale University Art Gallery is actually one of two museums housed on the campus of the venerable Ivy League institution, the other being the Yale Center for British Art, which is currently undergoing an extensive renovation (it remains closed until 2016). So the former is picking up the slack for the latter by presenting the first collaborative exhibition between the two centers. Titled, “The Critique of Reason: Romantic Art, 1760-1860,” the show presents paintings and other works by such 18th- and 19th-century luminaries as William Blake, Théodore Géricault, Goya, and JMW Turner, and is up through the end of July. The Gallery’s permanent collection and a show of Whistler etchings is also on view. 1111 Chapel St, New Haven, CT (artgallery.yale.edu, 203-432-0600)