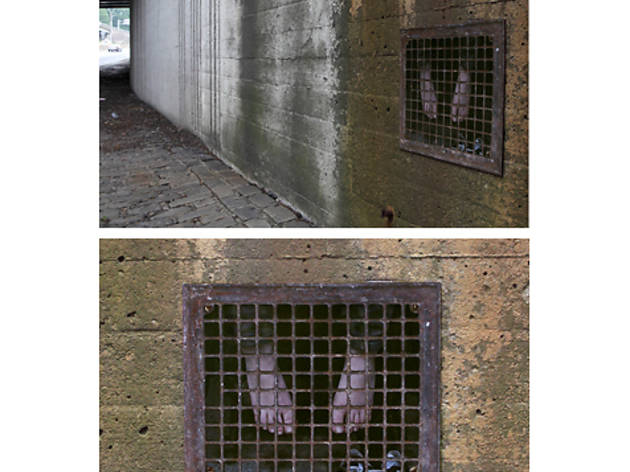 Who he is: Having worked on the street since 1978, Witz's style has evolved with police enforcement. "I used to paint tiny hummingbirds that took two hours to do, but the zero-tolerance graffiti policies of the '90s forced me to adapt," he says. "Now I paint them on plastic and install the pieces on-site in under 10 seconds. These new techniques have actually helped me do way more street art than if Giuliani had left well enough alone." Look behind grates on highway interchanges and buildings for Witz's creepy, trompe l'oeil "WTF" paintings, which resemble human parts lurking in the darkness. The artist always has a new project in the pipeline: "The Williamsburg and Bushwick area is like a giant self-replenishing collage," he says. "I can't resist."

Where his work has been:
1. Suicide Girl: Find it at a secret location on the Van Wyck Expressway. Says Witz, "Keep an eye out for it on the way to JFK."
2. West Side Highway, NYC: It's located on the eponymous highway, but as for the exact location, Witz is mum—you'll have to hunt it down. 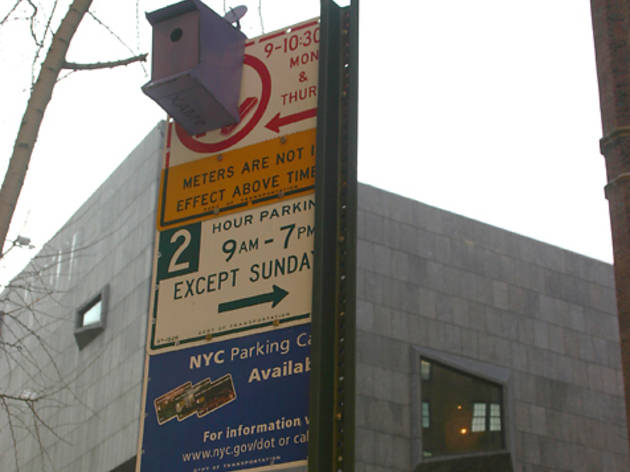 Who he is: XAM is a whimsical mainstay in the street-art scene. Last year, he began building and painting small, hardwood birdhouses and attaching them to street signs. Since August, he's installed more than 25 in Manhattan and Brooklyn neighborhoods ranging from Bushwick to the Upper East Side—including in front of the Guggenheim and MoMA—though they rarely stay up long. His newer birdhouses will have a barcode; when you scan it with a smartphone you can immediately download facts about the wrens, swallows or warblers that would use the houses. "I want people to question morality," XAM says. "Yes, my work is illegally placed in public, but should [poeple] take it down? It expands the audience of street art and brings birds back to the urban environment." He plans to drop 30 more birdhouses in a mystery areas this spring. 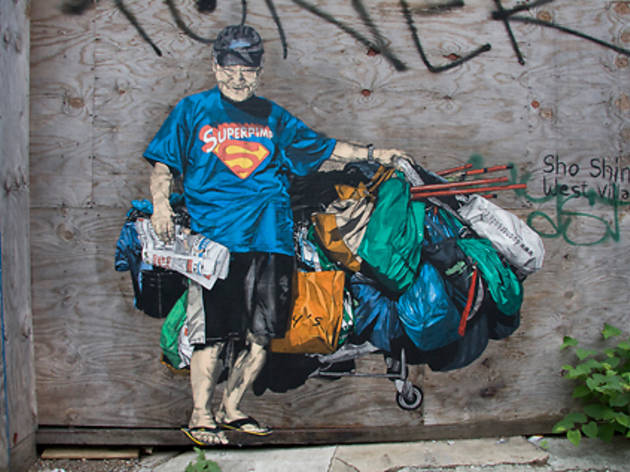 "Characteristics of location are important to me," says Gabriel Specter, who aims to enliven abandoned spaces with his site-specific paintings. "I often deal with socially marginalized people and places [in my work]." At Marcus Garvey Boulevard and Myrtle Avenue in Bed-Stuy, his ongoing If I Saw You in Heaven series features portraits of homeless people; Specter prefers to view his subjects as "celebrations of humanity rather than symbols of blight." Outside Flatbush's Parkside Avenue subway stop, the DOT- and ISCP-commissioned A Collection of Local Memories interprets stories from local seniors into a freestanding, three-sided mural. Also check out Unwanted Collaboration, painted with street artist Swoon, at Franklin Avenue and Dean Street in Crown Heights, Brooklyn.

Where his work has been:
1. Mural portion of If I Saw You in Heaven: Corner of Marcus Garvey Boulevard and Myrtle Avenue, Bushwick, Brooklyn
2. A Collection of Local Memories: The Parkside Avenue B/Q subway station, Flatbush, Brooklyn 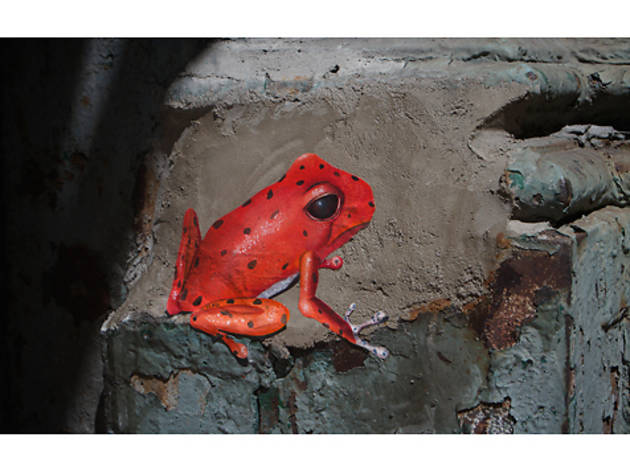 Veng merges a background in graffiti with a love of Dutch masters to create ambiguous but realistic portraits. He typically glues his oil paintings to building walls because, he says, working on the street allows his art to play off the environment and vice versa. "It adds a new feel to the work," he says. At Mercer and Spring Streets, Veng's small, cherry-red frog seems to pop out of a concrete wall, and at 36 Gardner Avenue at Ingraham Street in Bushwick, a walrus man overlooks an industrial block. He also paints with the collective Robots Will Kill (robotswillkill.com), which splashes murals around industrial Brooklyn.

Where his work has been:
1. Walrus Man: 36 Gardner Ave at Ingraham St, Bushwick, Brooklyn
2. Frog: Mercer St at Spring St 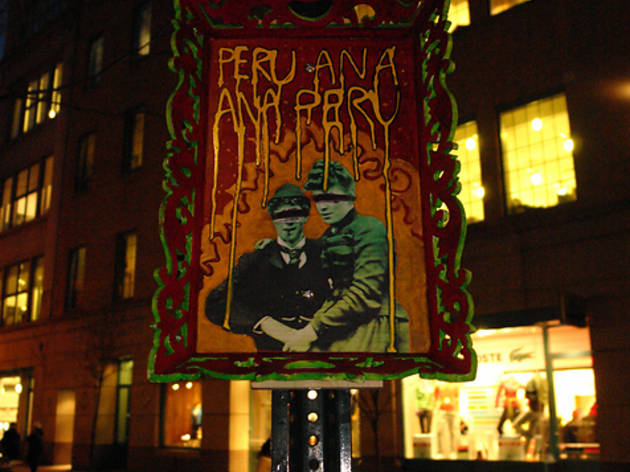 (peruanaanaperu.com)
Eclectic and exuberant, Peru Ana Ana Peru's work is easy to identify: The duo's name always figures prominently in each piece, whether the letters are dripping over a painting or incorporated as a logo. "We have a thrift-store aesthetic that utilizes random objects [like picture frames] and pulls from a lot of different genres," they say. "There's a joy of life in our work, and a childlike sense of rambunctiousness," they explain. Peru Ana Ana Peru mostly work in lower Manhattan and north Brooklyn, but they also produce distinctive block-lettered logo stickers that can be found all over the city. The duo is currently planning a series of pieces that will pop up both here and in South America. 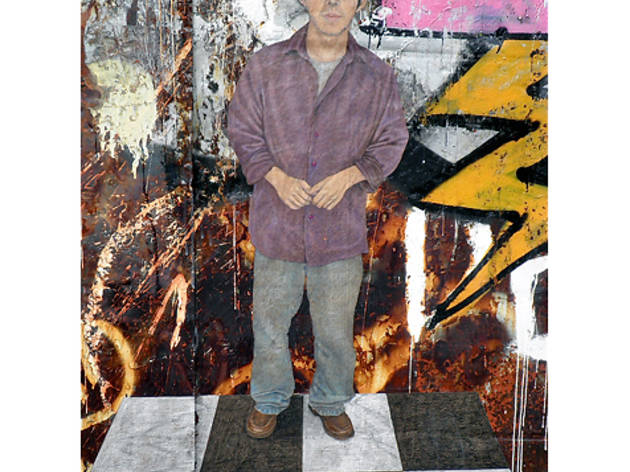 (dearcatherine.com)
An attention to detail and a fine-art sensibility distinguish White Cocoa's figurative portraits, which she draws with colored pencil on craft paper and applies to walls with wheat paste. "I became frustrated with the cost and elitism of oil painting, and experimented with cheaper materials," she says. Most of her work, which is scattered around Brooklyn, disappears within weeks. But you can spot a double portrait near the DeKalb Avenue L stop on Wyckoff Avenue. Next up: a series of tiny portraits of street artists, in the style of Russian icon paintings.

Where her work has been:
1. Untitled: South 4th St between Bedford Ave and Berry St, Williamsburg, Brooklyn (no longer up)
2. Untitled: 981 Dean St at Classon Ave, Crown Heights, Brooklyn 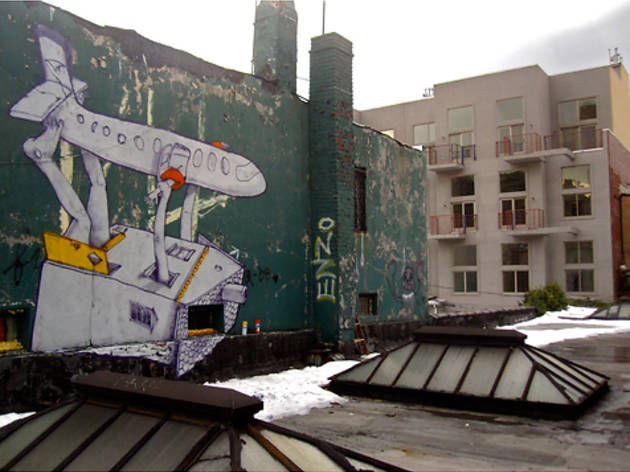 "Working on the street is an excuse to get to know neighborhoods through a new vantage point—sometimes while being chased," OverUnder says. "It's a kind of urban exploration." His casual, sketchlike paintings and graffiti of figures whose bodies are composed of inanimate objects (buildings, architecture) give off a stream-of-consciousness feeling. Lately, he's been drawing figures surrounded by brownstones or bodegas, which he says is a response to the city's high housing prices. Look for OverUnder's murals in the area between the Lorimer Street and Jefferson Avenue L stops, like one on Central Avenue, near Troutman Street. A piece based on Charles Joseph Natoire's Expulsion from Paradise is still on Skillman Street between DeKalb and Willoughby Avenues in Bed-Stuy, and ageing nicely.

SCOPE THE GOODS! Street Art Tour with Gabe Schoenberg
Graffiti Tours New York's Gabe Schoenberg designed a tour just for Time Out New York! He leads a two-hour van ride to Harlem, Soho and Long Island City to scope some of these artists' work. A guest street artist will come along to discuss the pieces and the ways in which the city's street-art scene has evolved. Meet at the northwest corner of Bleecker St and Bowery (grafftours.com). March 6 at 1pm. $50, students $40.