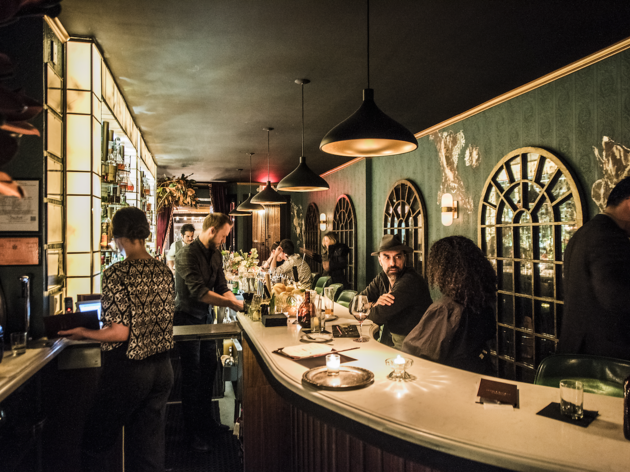 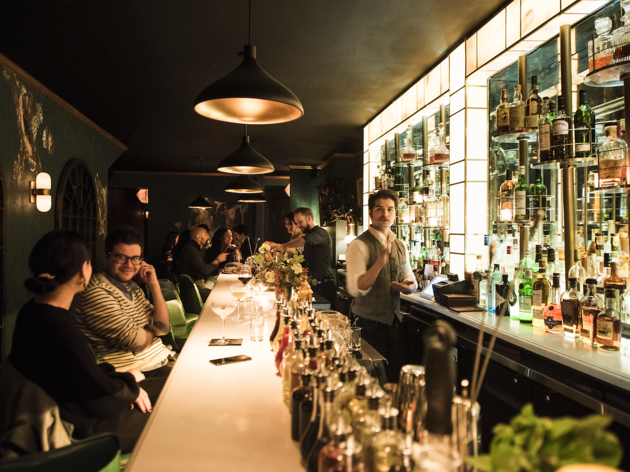 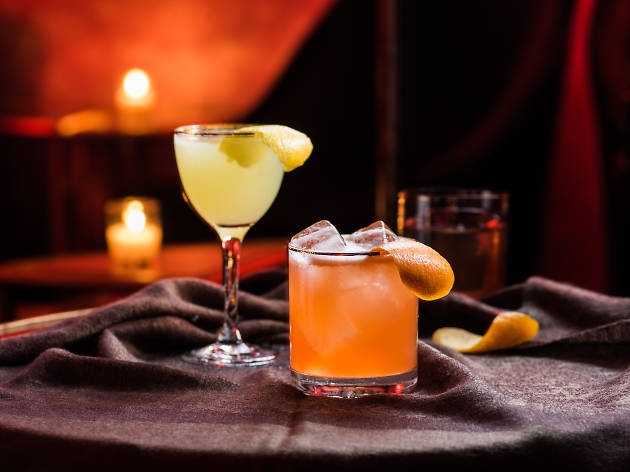 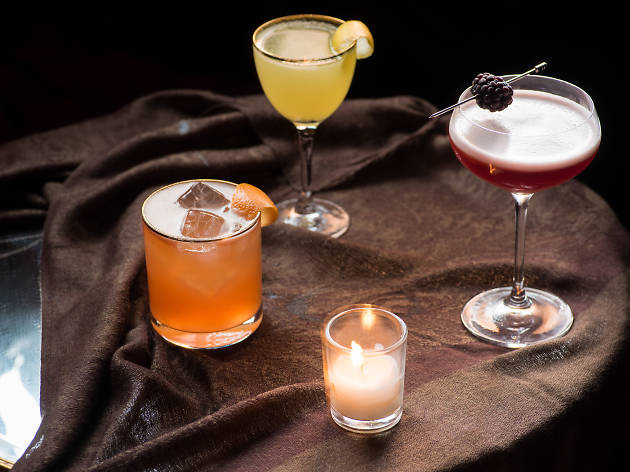 “I’m sorry, what?” is the response you get when you mention Barely Disfigured. Named after a 1932 Surrealist poem by Paul Éluard, the cocktail bar’s odd moniker is not made any clearer by the sentences etched on its front window: THIS IS NOT A BROTHEL. THERE ARE NO PROSTITUTES AT THIS ADDRESS.

It’s a wink-wink phrase hinting at the location’s past: The spot at 257 Smith Street was a short-lived “massage parlor” before it closed last December. The bar’s owners, Jeremy Andre, Damien Frey and Regis Vankaster (single, married and married, respectively), have had a good time playing with the space’s former identity, putting a distinctly flirty spin on the Brooklyn haunt.

The narrow rooms are reminiscent of a Sleep No More chamber, adorned with oversize double-starburst mirrors. A collage of yellow-paged open books lines the walls, and old-world potion bottles and women’s vanity knickknacks are strewn on counters. Slinky nods to its illicit past include a red light bulb hanging above the doorway and a bona fide canopy bed in a back room. The menu includes scratched-out text (but our patented Time Out Decoder Ring revealed light flogging and ménage à trois amid cocktail ingredients, plus the blacked-out words Private room only above a visible listing of $257/hr—a nod to its address—in the wine section). The bed is the center stage of a boudoir with a standing fringe lamp, nightstands and, around the bed, accent chairs and tables. “Every day,” Vankaster replies when asked if anything bad has happened on the bed. “The other night there was a woman jumping on it.” Oh, the Pretty Woman story of a Brooklyn brothel turned cocktail bar.

Though the atmosphere is lavish, the drinks have an introverted delicacy. Take the frothy Harlot’s Progress (named after a series of 18th-century paintings); the ingredients make for a seductive combo, with blackberry liqueur and egg white elevating smoky Scotch. The Dirty Old Man (also named after a poem…and every old man, apparently) is an effervescent mix of citrus and spice, thanks to mescal, chili-infused Aperol and pineapple juice. There’s even a token tiki drink, Fallen Woman; served in a green ceramic totem mug, it transports you to Tahiti with an orgy of rum and cherry notes from cinchona bark tincture. By the end of the night, you’ll be swaying to the beguiling jazz playlist and leaning in just a little closer to your date.

And if you’re worried that three thirtysomething men might be overromanticizing a sketchy Brooklyn bordello, know this: They’ve already pledged a portion of the bar’s proceeds to Urban Justice Center’s Sex Workers Project. Now that’s a happy ending.