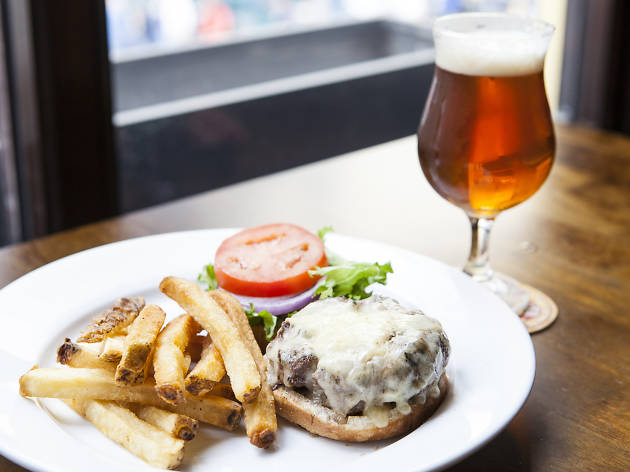 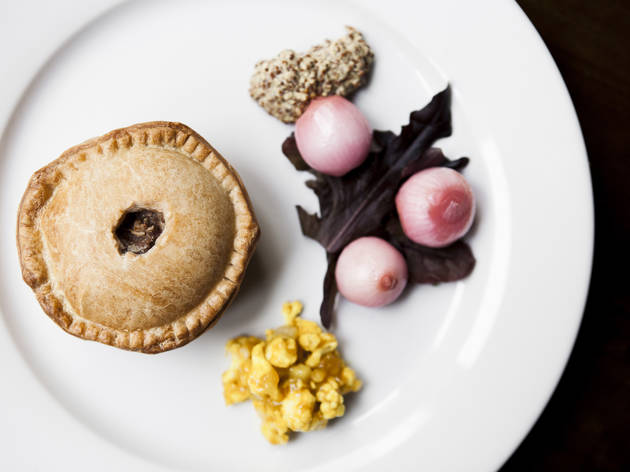 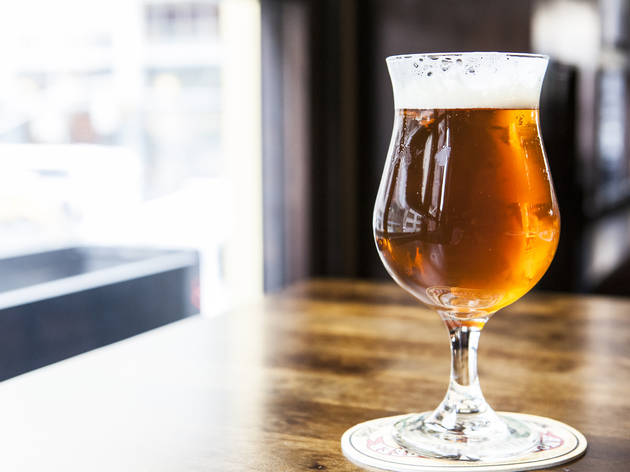 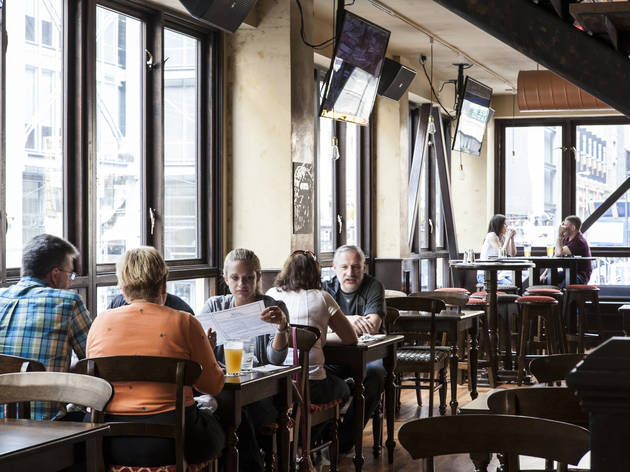 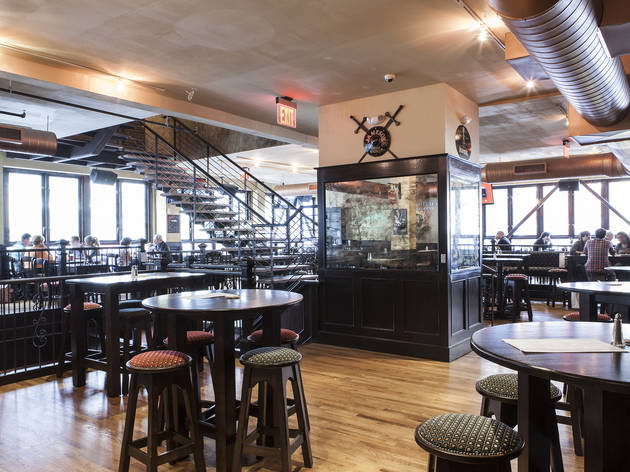 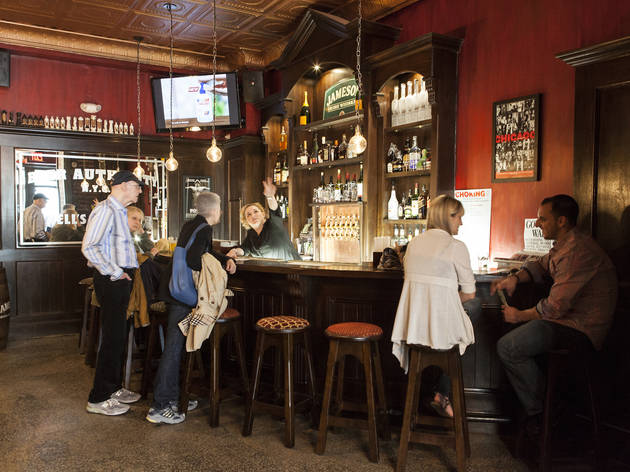 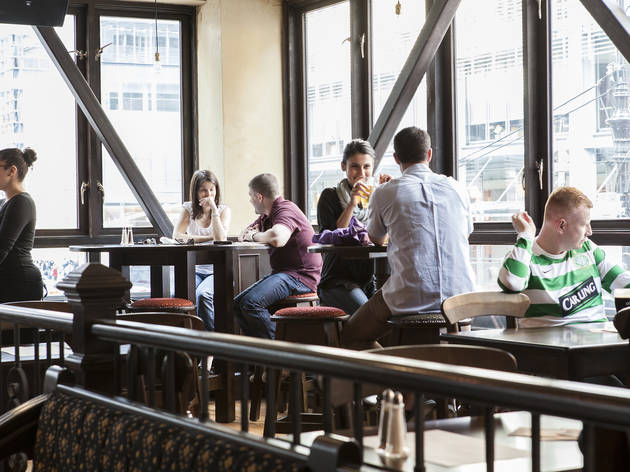 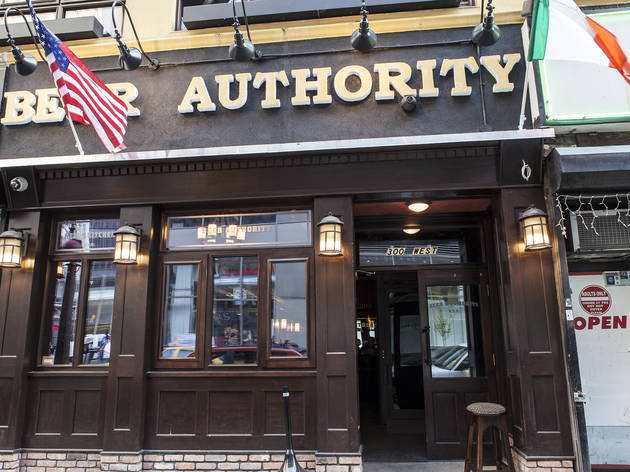 The craft-beer movement has been in expansion mode recently, colonizing far-flung neighborhoods like Washington Heights (Buddha Beer Bar), Long Island City (Alewife Queens) and Bed-Stuy (Brooklyn Tap House). What’s been glaringly missing from the takeover, however, has been a foothold in the thick of midtown—prime terrain for converting the Bud-swilling masses, as well as tourists who might be unaware of New York’s burgeoning brew culture. Thankfully, 2012 is shaping up to be a turning point: New York Beer Company and Little Town NYC kicked things off by flying the flag for local breweries, and now the long-delayed Beer Authority has upped the ante, christening a whopping 70-plus draft lines right across the street from Port Authority. Fair warning: The massive, multilevel gastropub—a spin-off of brew-geek favorite Rattle N Hum—won’t shake you out of your midtown ennui at first glance. Aside from some brewery decals on the walls and funky beer-tap handles on the bathroom doors, the place feels like a generic Irish pub. But for the suds alone, Beer Authority is a game-changer.

DRINK THIS: Rattle N Hum regulars will be familiar with the daily draft menus, printed on white paper and categorized by style, alcohol-by-volume and RateBeer scores. There are some concessions to the ’hood, to be sure: Rattle’s “No crap on tap” mantra has been loosened to allow macrobrews like Stella and Heineken into the mix, and a no-frills ground-floor nook peddles snoozeworthy beers and spirits to folks wandering in off the street. Still, the quality of the 62 taps upstairs is nothing to scoff at, and the prices are generally fair (most pints go for $7–$8). You can put together a fine session with standouts like Belgium’s standard-bearing Saison Dupont ($7), Sierra Nevada’s piney Torpedo IPA ($7) and creamy nitro pours of Sixpoint Otis Stout ($8). The bottle list is also sizable, with a mix of old-world classics (Aecht Schlenkerla Rauchbier Märzen, a stash of Trappist ales) and coveted domestic releases such as Maine Beer Company’s Peeper Ale. Serviceable pub grub can help balance out the pints—the pork pie, served with grainy mustard, offers a detour from the usual British Isles standards.

GOOD FOR: Commuters, midtown workers, pretheater boozers and anyone else in need of a good brew near Times Square. If you can get over the uninspired decor, you’ll appreciate the extra elbow room. For groups, the best tables are along the large windows overlooking the Eighth Avenue bustle.

THE CLINCHER: A third-story patio is in the works, bringing promise of a more casual approach to alfresco midtown drinking than the area’s swanky rooftop lounges afford. But given the bureaucratic snafus that delayed the bar’s opening (it was initially slated for last fall), you’d be wise not to hold your breath just yet.