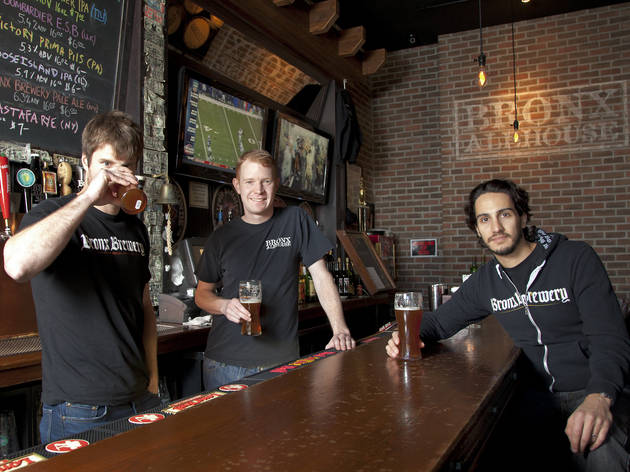 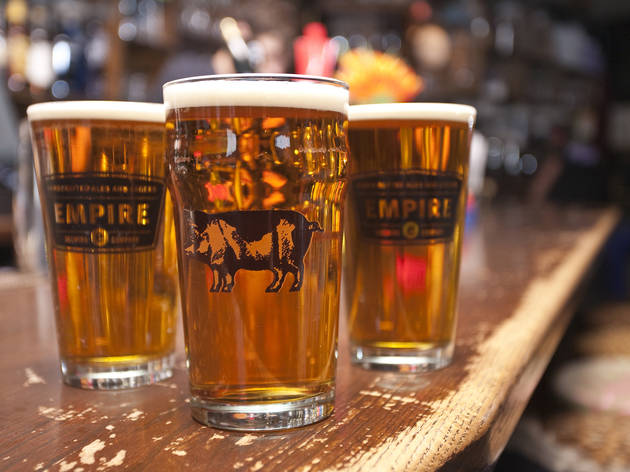 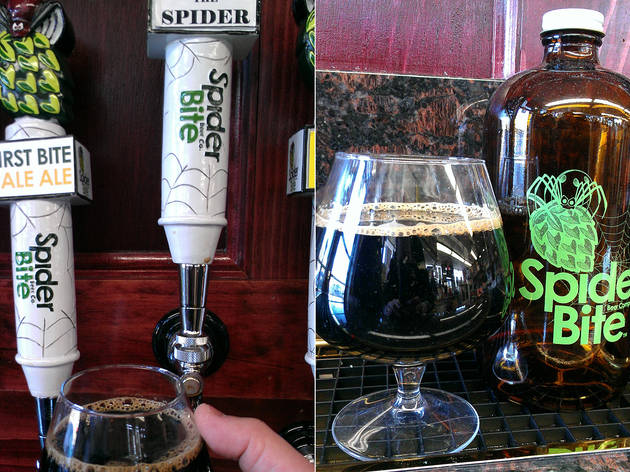 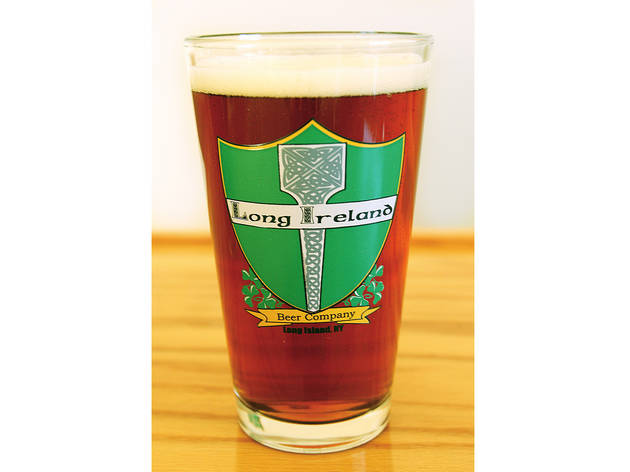 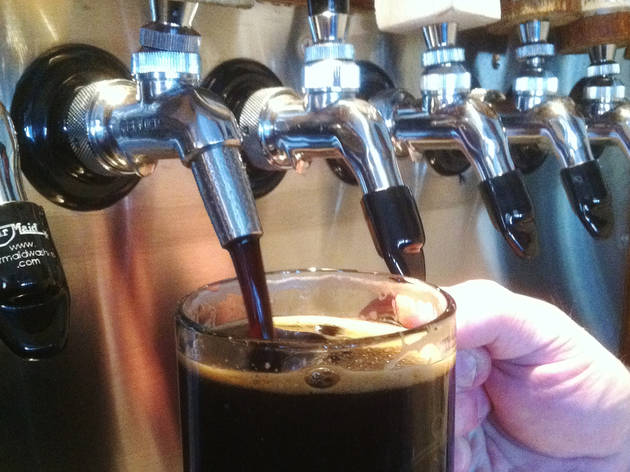 Bronx Brewery
It's about time another borough gave Brooklyn some craft-beer competition. With Kelso, Brooklyn Brewery and Sixpoint leading a resurgence in local brewing, Kings County has been hogging the hometown spotlight. But now, a new brewery—and, more specifically, a new beer—has made the Bronx a contender. While many DIY upstarts focus on innovation rather than consistency, the Bronx Brewery set out with one mission: to perfect its initial offering, a well-balanced pale ale with a lovely amber hue. Part-owners Stephen O'Sullivan and Niall Henry, both proud Bronx natives, hired a crack U.K. design firm and tapped brewer Damian Brown (a graduate of the Master Brewers Program at the University of California--Davis) and sales/marketing/development pro Chris Gallant (he spent time working for Heineken in South America) to run their business. After a full year of recipe tweaking, they launched the Bronx Pale Ale in September. Since then, it's been steadily colonizing city taps, becoming a regular fixture at craft-brew haunts like Taproom No. 307 and, of course, Bronx Alehouse. Brown and Gallant brew and ferment just 70 kegs a month at Cottrell Brewing Co. in Connecticut, then drive it down to the South Bronx for distribution. (They hope to ramp up output to 210 kegs by sometime in March.) The goal, says Gallant, is to win over local drinkers and enough investors to build the borough's first complete brewery since the '60s. Brooklyn, we suspect, will be watching its back.
Drink this: Brewed with five different malts from the U.S., U.K. and Germany, the Bronx Pale Ale combines biscuity smoothness with hints of grapefruit and pine, culminating in a nicely nutty finish. It's impressively drinkable, though at 6.3 percent alcohol by volume, think twice before making it your go-to session beer. Available at Bronx Alehouse, 216 W 238th St between Broadway and Bailey Ave, Bronx (718-601-0204, bronxalehouse.com). Pint $6.

Empire Brewing Company
A craft-beer stalwart in its native Syracuse, the 18-year-old Empire Brewing Company broke into NYC almost by accident. With four Great American Beer Festival gold medals under its belt, the farm-to-table brewpub was looking to expand to a larger facility when Greenpoint Beer Works offered a stopgap solution: The Kings County brewery would make some of Empire's beers right here in the fives boroughs. To maintain quality control, brewmaster Tim Butler and his team brought their special strain of proprietary yeast down from Syracuse in a sealed steel keg, then worked through initial batches with Kelso of Brooklyn until everything was just right. Happily, says Butler, they even found that Brooklyn water is "almost identical" in mineral composition to the H2O they usually use from Skaneateles Lake. Now, Empire's top three sellers (a silky-smooth cream ale, a heavily hopped rustic IPA and an easy-drinking amber) are Brooklyn-bred. Empire is so pleased with the collaboration, it plans to keep brewing in Brooklyn even after it finds more space upstate. Next up: Belgian-style white, White Aphrodisiac, that will hit local taps this spring.
Drink this: Like a golden Guinness, Empire's buttery Cream Ale is carbonated with nitrogen for that silky effect—it's a great starting point for noncraft beer nerds. Available at Taproom No. 307, 307 Third Ave at 23rd St (212-725-4766, taproom307.com). Pint $7.

Spider Bite Beer Co.
Larry Goldstein's original plan was to open up a brewpub in Atlanta, the Southern city where the award-winning home brewer had lived for nearly two decades. But tricky local liquor laws led him back to his native Long Island, and Georgia's loss turned into New York's gain. Last year, Goldstein—who interned at California's Lost Abbey and attended the American Brewers Guild in Vermont—launched his Holbrook-based brewery with a neighbor, Anthony LiCausi, and named it after the spiderwebs that appear between their houses. Goldstein's preference for hoppy, assertive beers is evident in their appropriately named debut, First Bite Pale Ale. But there's more to the duo's small catalog than just hop bombs—other creations include a saison named Araigne (French for "spider") and a burly Russian imperial stout called Boris the Spider. You'll need to stay nimble to get your hands on these fleeting drafts; production is still so limited that only a handful of NYC bars have them on tap, though bottles are coming soon.
Drink this: Boris the Spider is a roasty stout, kissed with a whiff of chocolate and coffee. Available at the Blind Tiger Ale House, 281 Bleecker St at Jones St (212-462-4682; blindtigeralehouse.com.) 12-ounce draft $6.50.

Long Ireland Beer Company
Beyond a generally accepted reverence for Guinness, the American craft-beer scene rarely shows much appreciation for traditional Irish beers. But hops-heads might change their tune after hoisting a pint from this cleverly named Long Island brewery, which pays homage to the easy-drinking Emerald Isle styles beloved by friends Greg Martin and Dan Burke. Their signature recipes—the Celtic Ale, a crisp Irish sipper dosed with honey and oats, and the low-alcohol Breakfast Stout, brewed with coffee—haven't changed much since they first started tinkering with a home-brew kit a decade ago. But it's been a long road to opening their own brewery—a dream they finally realized in October 2010 after years of juggling day jobs and schlepping around Connecticut and New York to have their beers made at other facilities. Now that they're up and running in Riverhead, expect to see more Long Ireland brews, including a winter ale and raspberry-wheat Hefeweizen, filtering into the city. Martin and Burke's latest project is a series of special large-format releases, such as a double IPA made with four different hops. Keep your eyes peeled for it this month: Only 500 bottles will make their way to NYC.
Drink this: Look out for the unfiltered, unpasteurized casks of the dry Celtic Ale—you'll find the pints creamy and sweet, with aromas of honey and oats. Available at Barcade, 388 Union Avenue between Ainslie and Powers Sts, Williamsburg, Brooklyn (718-302-6464, barcadebrooklyn.com). Pint $6.

Crossroads Brewing Company
Housed in a 19th-century opera house in Athens, New York, Crossroads was initially meant to be more of a brewpub and music venue than a full-fledged brewery. Co-owners Ken Landin and Janine Bennett hated their desk jobs, and long dreamed of opening a place that combined their shared love of live tunes and good beer. But once they hired brewmaster Hutch Kugeman, the game plan changed. With a pile of awards from his days at Great Adirondack Brewing Co. in Lake Placid, Kugeman brought instant buzz to the operation with his bold, West Coast--style IPA. Now, his 10 coveted drafts—such as the bright and grapefruity Outrage IPA and the golden-hued Brady's Bay Cream Ale—have transformed Crossroads into a darling of the state brewing scene. Not surprisingly, NYC suds fanatics have been clamoring for a taste. At first, Crossroads made a sly entry into the city at sandwich shop Press 195 (Landin was friends with the chef at the Bayside, Queens spot). The team had initially self-distributed its wares, but demand grew to bars in the city (mostly local-leaning places such as Jimmy's No. 43 and Double Windsor) and Crossroads now outsources the work to American Beer Distributors.
Drink this: Crossroads' Black Rock Stout is like a liquored-up mocha, with hints of coffee and chocolate. A healthy dose of hops helps to balance out the robust booziness. Available at Jimmy's No. 43, 43 E Seventh St between Second and Third Aves (212- 982-3006, jimmysno43.com). 13oz $7.