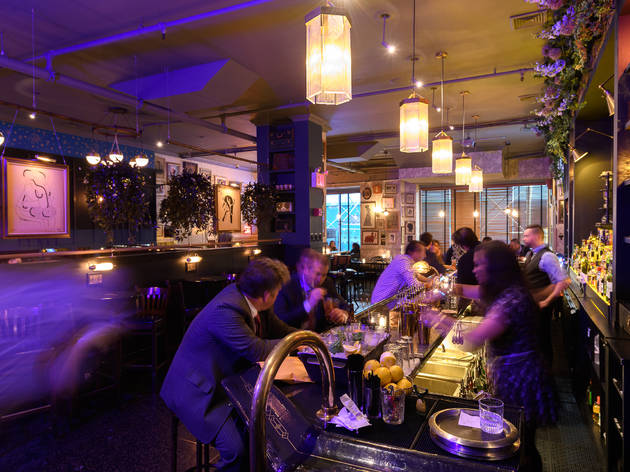 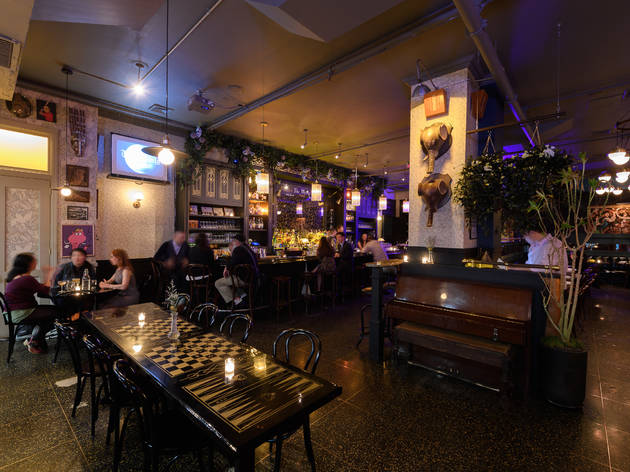 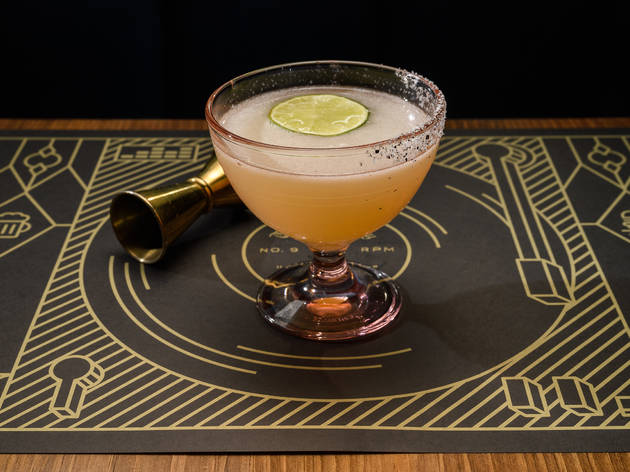 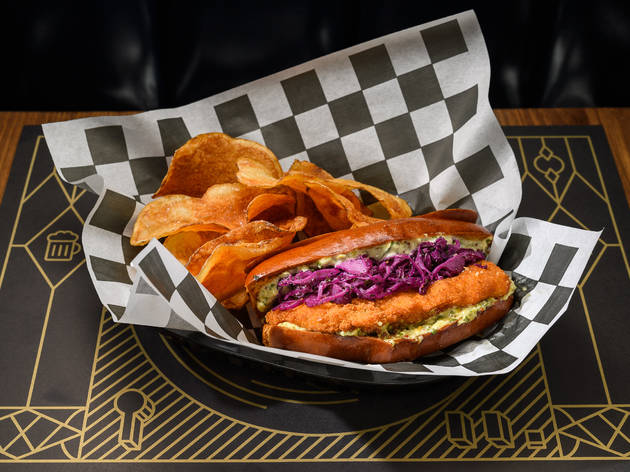 If there ever was a bar fit for the Sherman McCoys and Patrick Batemans of New York, this new offering from David Tobias and Eric Adolfsen should technically be it. Tucked into the base of the storied Woolworth Building, an old-world skyscraper with a $110 million penthouse under construction, a 100-year-old gilded lobby and a location plumb in the heart of the Financial District, all the stars seemed aligned for the bar to fulfill its soft-jazz, $25-cocktail destiny. Instead, the publike barroom—a sister bar to private-event space the Wooly—touts its stately ancestry not with highfalutin fare or snooty service but with cheeky woolly mammoth paintings and Whitney Houston on blast. The inevitable suits gather by the bar, but a more mixed crowd can be found munching burgers and sipping cocktails among hanging plants, framed vintage photos and faux-marble wallpaper in the sitting area. It may not exude the luxe grandiosity that F.W. Woolworth envisioned for his skyscraper, but it certainly gives his vision a rollicking run for its money.

ORDER THIS: The cocktail menu by Eryn Reece (Death & Co.) is divided into two sections: Old Souls and New Editions ($15), with the former riffing on early-20th-century drinks and the latter comprising modern quaffs. Of the New Editions, the vodka-based Icelandic Pop evokes none of its frosty name, instead manifesting as a rich, bittersweet twist on a tropical drink with aquavit, raspberry syrup and ginger. Twisting the Lion’s Tail, a 1930s restoration in the Old Souls section, is a heady mix of bourbon and mescal, with a spicy citrus punch from lemon and allspice dram.

GOOD FOR: Bringing your out-of-towner parents. Mom and Pop can enjoy urbane cocktails while savoring the laid-back atmosphere and hearty, high-quality bar food like an elegant fishwich that tops a buttery toasted brioche with thinly fried Alaskan cod and fresh slaw ($13). Treat your ’rents to a s’mores ice-cream sandwich for dessert, built with toasted-marshmallow gelato between fudgy cookies topped with graham-cracker crumbles ($9).

THE CLINCHER: Besides its early-20th-century decor, the bar employs several odes to the past, including bygone recipes pulled from a 1900 bartender’s manual and a 1920s Trinidadian hotel. Financiers might have enjoyed the tipples back in the day, but the Wooly Public fine-tunes them for its modern, everyday crowd, proving that while the wolves of Wall Street may howl, the woolly still looms large.