The Bessies nominated a trio for a single performance—the jookin' stars Charles “Lil Buck” Riley, Daniel Price and Ryan Haskett, who danced at the New York premiere of the documentary Pharaohs of Memphis. Jookin' contains within its street-dance aesthetic a host of styles: balletic toe stands, ice dancing's glides, hip-hop's body rolls and vogue-inspired freezes. Phoebe Driscoll's film had already won awards in Memphis for its portrait of the jookin' scene; when Pharaohs screened at the DAMN! Film Series in Manhattan, Price and Haskett came up from Tennessee to perform, only to be joined by Lil Buck (a 2013 Bessie winner) for an explosive freestyle improvisation. We spoke to the three by phone: Haskett and Price were in Memphis, while Lil Buck—appearing on Madonna's Rebel Heart tour—spoke to us from Portland, Oregon.

What was the origin of Memphis jookin'?
Ryan Haskett: Memphis jookin' is a dance style from Memphis, born in the late 80s/early 90s. It was originally called gangsta walking, a dance people did in the clubs and on the streets; then jookin' evolved as we started getting on our toes and 'breaking' our ankles.
Lil Buck: Memphis jookin' is notorious for gliding and sliding, and that's what Michael Jackson did—those moves embody his spirit, so there's a little piece of Michael when we're dancing. For the most part, though, jookin' feels cross-inspired. It originated from Memphis underground rap music: we would move a certain way, with a certain bounce in our shoulders. That bounce, that's what makes it jookin'. Gangsta walking was like a march-slash-line-dance; you're really turned out and marching forward. Then people competed, and people started adding waves and slides. The beauty of jookin' is that it's a freestyle—you take what you learn and you go on your own. You find your own style.

When did you start dancing?
Daniel Price: I've been jookin' since 2001, since I was 15. I'd been watching gangsta walking my whole life, but with jookin' being indigenous—in Memphis it was particularly unique. It was cool if you know the other forms like popping and breaking, but here, if you don't jook, you won't get along in this world very far!
Ryan Haskett: I didn't start jookin' until I was about 18. I was a studio dancer first, starting hip-hop when I was ten. I wound up meeting Lil Buck when I was 14, and he showed me a video of Daniel Price, who is phenomenal. I was his student; now I'm like a little brother to him and Lil Buck. I'm the first white guy who came in to the dance—it went from me being 'the guy who's coming around' to something that's like, 'Hey, he's got it!' It was a tectonic change in that relationship.
Lil Buck: I got started—in Memphis, of course—in my freshman year of high school. I didn't see it that much when I first moved there from Chicago; I was born in Chicago, raised in Memphis. Then I started seeing it a lot, just in the streets. You could stop at a stoplight, and you'd see some kids killing it in the parking lot. First of all, I'd never seen a dance style where people weren't doing it in classes—I'd never seen dance done out like that in the open. Then one of my older sisters, she learned it from her friend, and she was doing it in the living room. We were super-huge fans of Michael Jackson; we would try to do the moves. And this was like that.

How has your work changed?
Daniel Price: There's been a progression year after year—between 2001 and 2011, I went through a lot of different stages. I'm one of the only people in my community who truly serves the idea of variety; I never did the same combo twice, no one could charge me with being repetitive. And I think it's still teaching me things, in terms of experience—with jookin,' you can always relate it to new experiences.
Ryan Haskett: Me and the dancers that I dance with, we have gone through some intense spiritual changes. I had an awakening experience in 2011, and it changed how I approach the dance. Obviously, the external dance reflects the internal dance. Since it's an improvised dance, being more spiritually in-tune helps me be in the present, be where the true, real, raw creativity comes from—which I don't think is from a simply human place.
Lil Buck: It's still changing! And the form is changing: if we keep doing it the right way—evolving, not forgetting the history of it, I think it can evolve to something incredible. The way we move now, it's a way no one would have thought a human could move, so 20 years from now, who knows what we'll be able to do with our bodies! And as far as jookin' is concerned, I want it regarded on the same field as ballet, modern, hip-hop. It needs to be seen as its own, equal entity within dance.

Do you have a performance philosophy?
Daniel Price: Dance is a language—it's the only form of silent language besides sign language. I cowrote a book on jookin' [The Jook Book, available as an app through Android]—in which I expand on that idea of a language of jookin.' I'm a cultural anthropology major, and ethnographically speaking—we only a few more steps to be truly accepted as a cultural form. The steps we'd need to take? Non-profit programming! Oh, jookin' can make money, but that's not the point. Art is the key to civilization; we have to respect dance as the art it always has been.
Lil Buck: Well, I'm not this talented for no reason. Of course hard work gets you far, but if you're an artist, if you're a painter or dancer or a singer or whatever—it's a special feeling beyond working your ass off. It's unexplainable what keeps you going; to have that drive, it is because your soul is passionate. Movement can change people: you can inspire someone forever through movement. Music and movement! They're the soul of the world.

Do you have a preshow ritual?
Daniel Price: [Laughing] Nothing I can share!
Ryan Haskett: I meditate sometimes before a show. I listen to music before shows, I just try to get myself in a good place. I don't do one thing, but whatever makes me feel good that day—anything that keeps me in the vortex. I might play basketball; I might DJ something so when I get to the show I'm in a great place.
Lil Buck: I do kind of have a preshow ritual: I think about my granddad. He's passed away, and he was one of my number one supporters. He really saw me dance—my family was busy just trying to stay afloat, you know? He was the one person who knew that I was really good. So I dedicate every show to him. 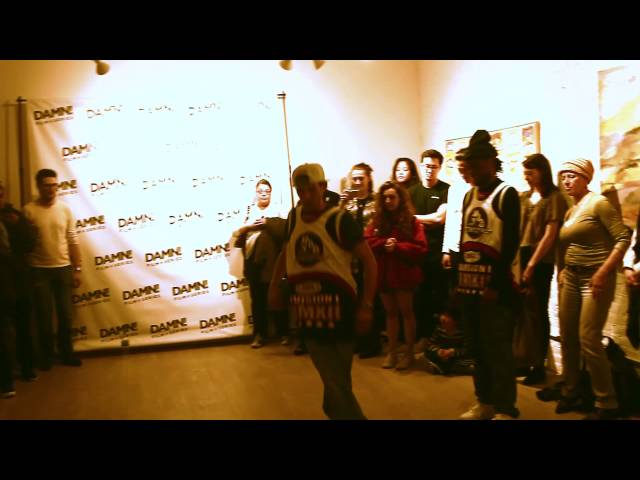