The Bessie committee nominated Robert Fairchild for his work in An American in Paris, the romantic dance-musical directed and choreographed by Christopher Wheeldon, based on the 1951 Gene Kelly movie and the beloved Gershwin score. The fact that Fairchild was also nominated for a Tony for his role of Jerry—a sweet GI swept away by his love for a French shopgirl—speaks to the demands of the role: Fairchild had to turn himself from a New York City Ballet principal into a triple-threat who could also sing and act. In Paris, Fairchild channels Kelly while making the role his own: he squares his shoulders and swivels his hips just so, and we feel as though we're watching the Golden Age of Hollywood come alive again.

How long have you been working on An American in Paris?
I'd have to look at my phone call from Chris Wheeldon! It was a long, long audition process, then through workshops, through readings, through the Paris tour, through Broadway opening—it's easily been three years.

How did you get involved?
I'm the kind of person who loves a challenge and this was the perfect next step to push myself. Chris [Wheeldon] saw me tap dance in a gala, doing a Fred Astaire tribute with [fellow NYCB principal and his wife] Tiler Peck—and he said, 'I'm going to have to steal you away from this place!' He asked, 'Can you sing?' And I said, 'I think I can sing!'
I think I was the first person they saw—but then it was a year-and-a-half long search. I was working with an acting coach on Mondays, but I was strung along a while—they didn't know if I was going to get it; I know there was a while that I didn't get it. I remember saying to Chris, 'If you give me the chance to learn this skill set, I can do this.' You don't have to put yourself out there in the same way in the ballet world; it was the first time I'd ever done that.

How has being in the show changed your work as a performer?
It's certainly affected my work at City Ballet. I did Thou Swell [the Peter Martins ballet set to Richard Rodgers songs], and I found that what I have learned as an actor has informed my dancing. I've always loved to tell stories in dance, and now I have my brain more as an active part of the storytelling. I love that I'm learning new skill sets that are making my dancing more specific and relatable. Sometimes ballet can be unrelateable to people; if you're not connected to the person, you're just watching a body moving through space. But if it's a body with story—that's cool. That's what I want to do.

Do you feel you have a particular connection to Gene Kelly?
Oh, the way he dances is so American; it's just in our DNA, and it's how I grew up. That athleticism, that drive, that determination! Our body styles are similar—I'm taller than he is, but we have that athletic build. When you idolize somebody, you adopt some of their characteristics, and you adopt things and make them your own. Inevitably, you see some sort of stylistic similarities because of the inspiration, though I'm not dancing any of the actual steps he choreographed in the movie. There are times I do little nods to him, little poses—that's always fun to do.
My mom bought Singin' in the Rain for me for Valentine's Day right after he passed away—my sister [Megan Fairchild] is the one who got me started dancing, but Gene Kelly's the one who made me want to be a dancer. Actually, my parents were in the basement, and they just found an essay I wrote in fourth grade. It was called “My Special Place” and I said: 'My special place is on Broadway, because my favorite dancer is Gene Kelly and I want to be on Broadway just like him.' I had forgotten that! It gave me chills. Because here I am, in this role, on this path.

What is your most memorable moment from the show?
There's a moment where I come around at the end of the pas de deux, and I'm jumping around [ed.: these are huge, stage-spanning leaps] in a circle. It's such a freeing moment! I've done that 200 times now, and your body just starts to ache. But flying out of the wings like that and surprising the audience…oh! As a dancer—'flying' is what you strive for. You're trying to defy gravity. And so that moment always feels liberating. It's my version of a high note.

Do you have a performance philosophy?
I dance because it's kind of a give and take—it feels like a selfless duty to share the art form. And I also do it to inspire young dancers like Gene Kelly inspired me. I believe in it so much! Ballet is so unnatural for the body; it's otherworldly; it teases the eye. And it's a wonderful feeling to get to share that with the audience. Moving people is just hugely gratifying.

Do you have a preshow ritual?
I always warm up and do a ballet barre, warm up vocally, maybe do an acting exercise. But I absolutely can not do the show unless we do these two things backstage. First, you always say 'Merde' [rather than “good luck”] in the ballet world, and I've always though it sounds like 'Meredith.' I said that once to Brandon Uranowitz, and he said, 'Vieira.' [Laughing] And now we do this weird version of that as a song. I'm so superstitious! I had to do that with the dresser when Brandon was out on vacation. And the second thing is, right before the curtain comes up in front of the Nazi flag, we say 'Un, deux, troi—Vive le France!' It would feel weird without that. 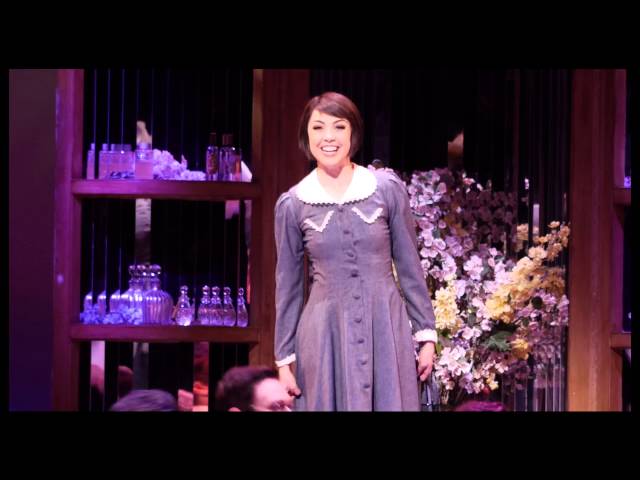