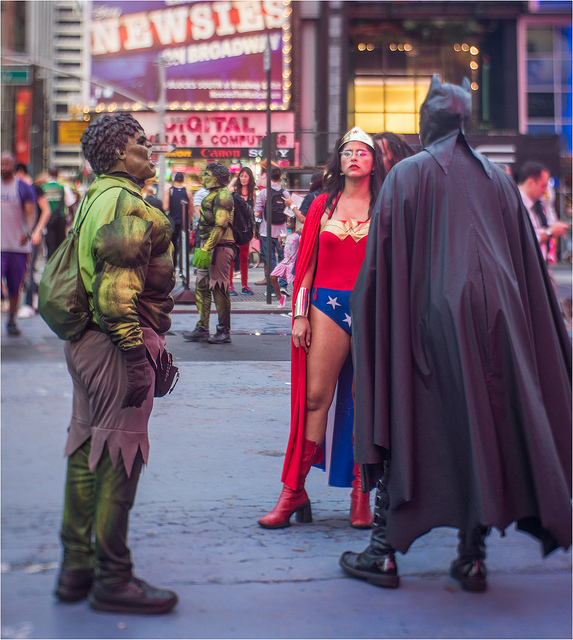 Holy smokes, Batman! The city’s heroes (and villains, cartoon characters, etc.) are under attack. Or at least their right to hang out in Times Square is.

Today the City Council heard testimony about new legislation that would allow New York’s Department of Transportation to regulate the use and activities in the city's plazas, most notably Times Square. The regulations could potentially be used to reign in the growing population of costumed characters. The legislation, which is supported by several council members, the Times Square Alliance and, of all people, the Naked Cowboy, would possibly be used to set up specific zones within the public space where the costumed characters would be confined. The call to action is a response to the dozens of reported incidences of assault and harassment that the characters have been accused of in the past year.

With their livelihoods on the line, many of buskers—including a Spider-man, Joker, Penguin and Batman—appeared in costume at the hearing to testify about the ways the zoning would affect their ability to make a living. If sequestered in one location, the performers, who regularly make close to $150 a day, would go unnoticed by many of the tourists wandering through. The legislation could also affect the workers who sell sightseeing bus tours and rely on being able to move freely among the city’s visitors.

While it will be a few days before a verdict is decided, the hubbub around the hearing made for some great pictures and posts on social media:

After a Times Square Spider-Man went to court, the Spider-Man cartoon intro got an update https://t.co/Y2TYJv935p pic.twitter.com/EDRFLgpwod

"I agree with The Joker, even though he's a villain," Spider-Man says at city council hearing (photo @katie_honan) pic.twitter.com/F96eWj2tjH