These four seasonal waterfront bars are returning for the spring

The arrival of warm weather in New York means the return of the city's beloved outdoor drinking spots, from verdant patios to towering rooftops and, of course, breezy waterfront bars. This spring, these seasonal spots are once again welcoming Gothamites looking to booze while catching sunny views of the city's river fronts. From a Brooklyn barge booze cruise to a floating lobster shack on the Hudson, here are the best waterfront bars dropping anchors in New York this year.

Grand Banks:
Housed aboard the historic wooden schooner Sherman Wicker, this oyster-and-cocktail bar is modeled, fittingly, after the bivalve barges that once lined the waterfront during the 18th and 19th centuries. Returning for its third year, the bar will for the first time offer limited reservations for its highly coveted seats. Snag a spot to enjoy slurpers alongside refreshing quaffs from Lauren Schell (Milk & Honey), such as a Mariner with rum, Montenegro, honey and grapefruit. Now open, food menu debuts on May 2

The Frying Pan:
This floating dive bar is set on what was once a sunken Coast Guard lighthouse. Salvaged and filled with booze, it will reopen this month with a seafood-heavy menu of New England lobster rolls, fully loaded clam bakes and baskets of St. Louis-style ribs. Soak up that grub with pitchers of white sangria, by-the-glass and bottled wines, and cocktails including a rum-and-pineapple Captain John. Now open 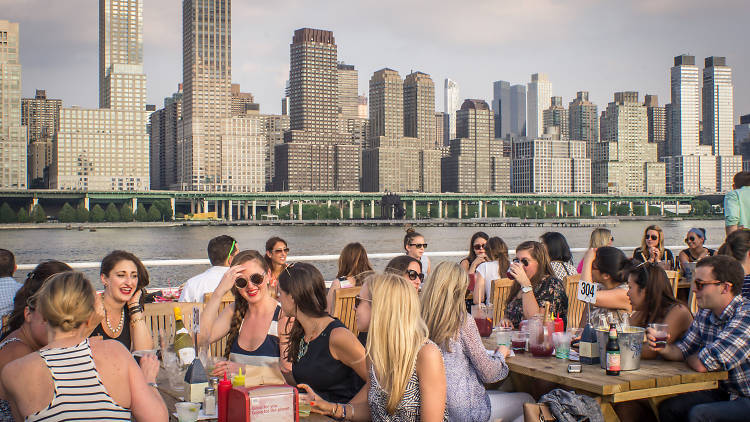 North River Lobster Company:
Re-opened last weekend, this floating New England lobster shack is pouring out all-new drinks for the season, such as a Firefly (melon liquor, coconut rum, banana liquor) and a house take on a Long Island Iced Tea. On the food front, there are three new lobster rolls including the Pacific Meets Atlantic (nori, sweet chili, scallion-Sriracha-lime aioli). As an added bonus, the team behind North River will also be opening their new sister venue Fish Bar this summer at Pier 81 on W 42nd St. Now open

Brooklyn Barge Bar:
Though still awaiting city permits (darn those technicalities), this new, permanently-docked barge is set to pour wines, beer and nautical cocktails at 97 West Street on the Greenpoint waterfront next month. Set to open in May