W. Kamau Bell interview: ‘It pays way better to be Jeff Dunham than it ever paid to be George Carlin or Lenny Bruce’

With Thanksgiving barely over and Christmas and New Year’s Eve on the way, most of us are too busy stuffing our faces to consider all the ridiculous stuff happening in the world right now. But don’t worry—W. Kamau Bell is heading back to NYC to spread some much-needed sanity to the festive season.

Your new show covers everything from gun control and atheism to homophobia and, apparently, why you think God looks like Denzel Washington. Are there any topics throughout your career that you’ve decided to steer clear of?
I keep trying to write the crowd-pleasing slavery joke and the crowd-pleasing reparations joke, but any time you mention slavery or reparations in any detail, it seems to bum lots of people out. That’s a challenge I keep putting in front of myself. I want to write the reparations joke that makes people go, “Yay! I’m so happy!” It’s easy to go onstage and just make fun of all the “isms” instead, but we can’t all be Jeff Dunham. Although that pays very well…it pays way better to be Jeff Dunham than it ever paid to be George Carlin or Lenny Bruce.

That may be the saddest thing I’ve heard all day.
Yeah, sad laughter! That’s my demographic. Sad-ter

It’s still better than clap-ter.
Yeah—clap-ter’s only a great technique if you make people clap, like, “Yay, we agree with you!” then say something that totally bums them out.

Have you always incorporated politics into your act, or was your early stuff more general?
When I was starting out I was just bringing a garbage bag of jokes onstage, pulling them out like, “What about this? No? Alright.” I was just trying to be funny about anything. The jokes I was always attracted to, and that I would tell for the longest, were jokes where I cared about the subject. Whenever I wrote a joke where I didn’t care, even if it was really funny, the third time I told it, it would lose steam.

There’s a lot of talk these days about younger people getting their news and politics from comedy rather than news shows. Do you think that’s a valid criticism, or is comedy now a more trustworthy medium?
I don’t think you should get any of your news from just one source, whether it’s The Daily Show or Fox News. The only people who’d say that are people who know they’re giving you a skewed view of the news, like Fox saying they’re “fair and balanced.” “This is the only place you should come!” But when you’re young, start with the thing that’s most interesting to you, whether that’s The Daily Show or Colbert or John Oliver, then say, wait, I want to read more about the thing they’re talking about, and then find other sources.

You described the GOP primary candidates during the last election as being like Adam West Batman villains. What do you make of the likely contenders for both parties this year?
I feel like Hilary Clinton doesn’t want to run for President, she just wants to be President. She’s trying to wait as long as possible to announce her candidacy, like, “I don’t want to do that shit again!” I think if she can figure out a way to announce her candidacy 24 hours before voting day, she will do that. “Surprise! I’m on the ballot!” But I think she’s unbeatable unless Republicans are in a laboratory somewhere creating a new type of Republican. Look at the choices they have—the fact that Romney is being talked about again, oh my God! It’s been a real waste of the last four years if Romney is their best hope. I keep thinking, there have to be younger GOP people who are like, hey, if gay people want to get married, I’m cool with it, if people want to smoke weed, I’m cool with it, let’s just figure out a way to get jobs back in this country. There’s got to be that person somewhere, but they won’t let that person stand up.

You’re launching a podcast called Denzel Washington Is The Greatest Actor Of All Time Period. Would it be fair to say you quite like Denzel Washington?
Yes! [laughs] It does exactly what it says on the tin. Denzel Washington has been a permanent feature in most of my adult and teenage life, so it feels good to sit back and say; now we’re just going to talk about Denzel for an hour. We review the entire Denzel filmography in alphabetical order. From our perspective, people know they like Denzel Washington, but we don’t think that they give him enough credit. One day, Denzel Washington’s going to die and he’ll get one of those posthumous lifetime achievement awards, so we’re like, we have to give it to him now! He needs to know how great we think he is!

Have you invited him to come on the show?
No, because I don’t want to be embarrassed! If we do the entire Denzel filmography and he never hears about it, or he hears about it and says, “That’s some stupid shit,” I hope that never gets back to us. It’s really just our tribute to him and I hope he understands that. 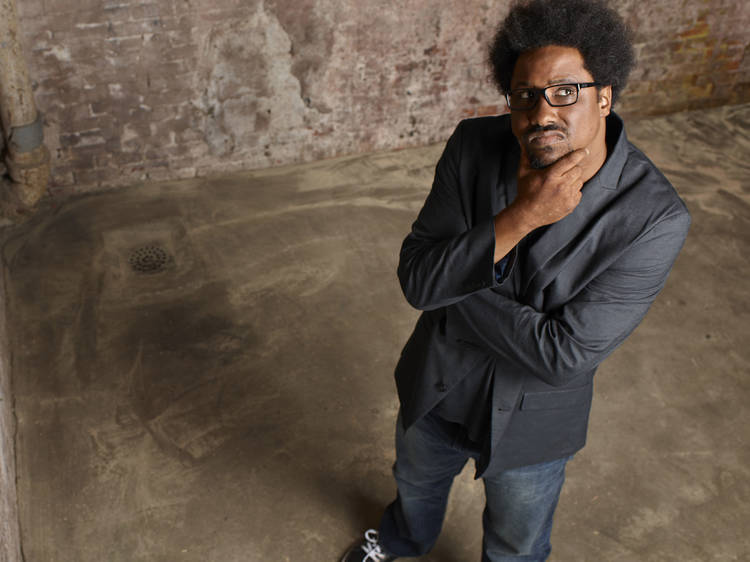 Though Bell's Totally Biased with W. Kamau Bell has finished its run on FXX, we're happy to see him still on the East Coast. As a stand-up, Bell's thoughtful observations about race, sex and gender eke out the subtext in everyday behaviors we don't think much about.