We talked to Nick Kroll and John Mulaney (in character) about Oh, Hello

The “too much tuna” prank duo, Nick Kroll and John Mulaney, take their act to Off Broadway in a new live show

Gil Faizon (Nick Kroll) and George St. Geegland (John Mulaney) stole the hearts of the nation—or at least Comedy Central viewers—with their recurring segment “Too Much Tuna” on The Kroll Show. Since the series finale last spring we’ve been deprived of their brilliant prank in which they give unsuspecting victims oversized, particularly pungent tuna sandwiches. Now, after nearly four decades in Manhattan, the Upper West Siders are making their Off Broadway debut. They took a break from protesting a vegan grocery that wouldn’t let them pour diet soda into the juicer to chat with us about holiday markets, the city’s best movie theaters and one of the best plays to see now.

What should people know going into your show?
George St. Geegland: I'm one of the great American playwrights of, well, I guess the 20th and 21st centuries. It sounds weird to say, but it's true. This is a play that I wrote and Gil and I star in together.
Gil Faizon: I'm more of an actor—a very celebrated actor. Some of my credits include the chorus in Sunday in the Park With George Takei and I was in Sex in the City as a bowl of soup. We're at the Cherry Lane because we won a lesbian playwriting initiative. We sent in a picture of ourselves...
GSG: ...and they thought that we were lesbians.
GF: They thought we were elderly lesbians. So we have this run at the Cherry Lane Theater. They're not happy that we're there, but everyone is making the most of it.

Was is difficult to learn all your lines?
GF: I learn my lines by screaming them into a T-shirt in the mirror of my bathroom, so I just always picture myself alone in my bathroom.

Does that help for stage fright, too?
GF: I'm most comfortable in front of a stage.
GSG: I've done a lot of bad things, but I think there are laws that you can't be arrested on stage, so I'm always very comfortable.
GF: I don't have stage fright, but I do have—well, I have raccoon fright, but then I also sometimes have bathroom fright.

What was your inspiration for this play?
GF: The play pays homage to so many great theater traditions. What we're most known for is Kroll Show on Comedy Centerl, because of those two shits Nick Kroll and John Mulaney, who licensed "Too Much Tuna."
GSG: But that's not all that we do! Our work was commandeered by Comedy Center.

Does this mean there won’t be any tuna in this show?
GSG: There’s so much tuna!
GF: The audience isn't going to have even a clue about what's going to hit them square in their big fat noggins.
GSG: It's going to be like the end of The Unusual Suspects when you realize Kaiser Permanente has just been reading stuff on the wall, and you go, oh my god—
GF: Oh my god, the whole time the bad guy was a coffee cup!

Did you just spoil that movie?
GF: That’s what we’re here for. Go to the movie listings of Time Out New York and whatever is playing at that one communist movie theater near Lincoln Center, we'll be there ruining it for anybody who wants to come.
GSG: And I love to go down to Film Forum and sit right behind the pillar and just miss the whole movie.
GF: You know, we'll also be outside of the Joyce Theater ogling dancers as they walk out, but we won't be at BAM—we don't go to Brooklyn.

Honestly, I was surprised to hear you were doing a show in the West Village. That seems like a long trip on the 1 train from the Upper West Side.
GSG: It's a big trek, but the West Village is so beautiful around Christmas, it's like a little snow globe of these tiny cute little apartments that wealthy Saudi men rent and only live out of for a few weeks out of the year.
GF: It's really gorgeous, and if we're feeling really excited we'll walk up to Union Square and we'll go into the Christmas shops and, if we want to feel the ultimate claustrophobia, we'll look at knit monkeys to buy for our nieces or nephews or grandkids...
GSG: ...yeah, for a second you'll think, should I buy my grandson an itchy puppet?
GF: But then you don't.

What are you going to get your grandson?
GSG: Gil has a five-year-old grandson and I just got him—I can't wait to see his eyes light up—a big biography of Lou Reed.
GF: Yeah, it's such a thoughtful gift, and he just needs to return it to the library by the end of the year.

You both have such storied careers. What's your opinion on the state of New York's current theater scene?
GF: It's so exciting. You know we've seen the second act of so many shows, because we sneak in halfway through, and for me, obviously, since the development of the sippy cup with Diet Cokes, it's a huge thing. Obviously the state of eating snacks during shows is awesome.
GSG: I'm very excited for this David Mamet/Al Pacino play that's coming out. Have you heard about this?
GF: I haven't!
GSG: It's David Mamet's dialogue performed by Al Pacino and I am buying so much stock in ear plugs right now because he's going to scream that dialogue and people's heads are going to explode.
GF: He's playing the market. You know, yesterday I saw Fool for Love, the Sam Shepherd Play with that cutie Sam Rockwell. He's a real rascal, a real modern day American hunk.
GSG: You can see his butt in Confessions of a Dangerous Mind.
GF: Yeah we slowed it down for that tush.
GSG: You know, frankly, we make a lot of people very happy.

I believe it with the quality of your pranks.
GSG: Well, pranks are an art form like the way Ricky Jay does close-up magic and then narrates it in a way that it sounds like he's lying down. For us it’s another art form. 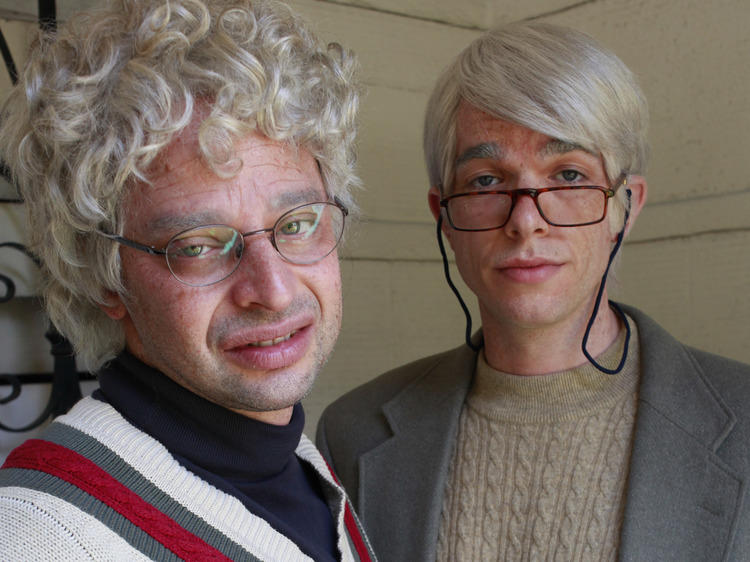 Two of comedy’s biggest young stars Nick Kroll and John Mulaney bring their curmudgeon, upper west side alter egos Gil Faizon & George St. Geegland—previously featured in Kroll Show—to Off Broadway. Kroll and Mulaney’s commitment to these bizarre old perverts is something to behold. They’ll quickly go from their detailed opinions on each of the New York Mayors (Koch is their decided fave) to a bizarre anecdote about their fictional families—each occasssionaly finishing the other's sentence like an old married couple.