David Hallberg talks about his LEGACY program at Lincoln Center

Youth America Grand Prix hosts an evening curated by David Hallberg that showcases dancers from the Mariinsky, the Bolshoi and more

How does an injured ballet star kill time? In David Hallberg’s case, you curate a program of dances. “David Hallberg Presents: LEGACY” offers an intimate look at the ballet companies he has forged relationships with over the years: the Mariinsky Ballet, the Bolshoi Ballet, Australian Ballet and Tokyo Ballet, as well as ABT Studio Company. The lineup includes Bhakti III, a work by Maurice Béjart, along with dances by Pierre Lacotte, Stephen Baynes, Jean-Christophe Maillot and Yuri Smekalov. Presented in conjunction with Youth America Grand Prix—the finals are April 15 and the “Stars of Today Meet the Stars of Tomorrow” program is on April 16—Hallberg’s gala night is set for April 17 and will be sprinkled with his own commentary. Here’s a sneak preview.

How did you come up with this idea? Was it something you wanted to do for a while?
No. Larissa Saveliev [of YAGP] came to me and said, “There’s a second evening that we haven’t planned for YAGP, and I know you’re injured and you might have the time—do you want to plan anything?” I was intrigued, but I knew I couldn’t just put on anything. It had to be appropriate for YAGP and for the Koch. For me, what was most important was to involve the competitors, so that they could learn from this experience. I decided to feature the five companies that I’ve danced with more than once around the world. I wanted to do something not gala evening. I felt like the competitors could learn, and New York audiences even, from more substantial pieces from each company.

What is the Bolshoi presenting?
Pierre Lacotte’s Pharaoh’s Daughter. Honestly, I have gone back and forth with the Bolshoi on what to present. I originally wanted stuff that they couldn’t get the license for—once you start planning these things, you have to make lots of compromises. But for me, Lacotte is someone, along with Maurice Béjart, who is so rarely seen in New York and who people have very strong opinions about. I do feel it’s necessary to see these works and to not ignore what’s happening on the other side of the ocean. In New York, we tend to lean more toward one way in terms of what we present, and I’m trying to break that down little by little to show that there’s a whole other side of choreography that’s rarely seen here.

Why is it important?
Regardless of whether you like the work or not, it’s important to know these really long lineages of choreographers. Maurice created work for more 60 years, and he’s so rarely seen in America. It’s like [Antony] Tudor. In modern day, people do have opinions about Tudor, but seeing Tudor is really important. Tudor was an unbelievably influential choreographer and so is Béjart and so is Lacotte.

I guess it’s just difficult for me to compare Béjart with Tudor. What are you going to talk about during the program?
This is the first time I’m ever producing anything in the ballet world. I’ve always had desires to produce in other worlds. [Laughs] I looked at this evening, and I was like, How do I make this unique? I’ve gained a personal view on each of these theaters, and they’re all very individual, so I thought it would be interesting if I presented each theater and gave a quick anecdote about each one and what my experience was dancing with them.

Like what?
When I danced with the Mariinsky, I was so nervous. It was a huge turning point in my career. I danced The Sleeping Beauty, and I realized that it was created there, the orchestra was being led by [Valery] Gergiev. It was one of those moments where I was like, Okay, you can either crack under this pressure or you can really learn from this. I want to share those details with the audience. That it’s not all just going onstage with confidence and hearing applause. Every artist goes through unbelievable amounts of doubt and fear.

What do you remember about your time as a young dancer with ABT Studio Company? What has stuck with you?
Naiveté. [Laughs] I certainly learned a lot in one year. I thought that I didn’t need to learn a lot and it turned out I did. I went in wanting to be a company member right away. I had insane ambitions. I could barely lift a girl. I could barely turn a girl. I couldn’t partner, and I hadn’t caught up with myself physically because I developed quite late. For me, it was a major learning experience and the most ideal transition for me, from really strict classroom work—because I had just come from Paris Opera—to being thrown into a company and learning repertoire and being in charge of myself.

What do you want this evening to say about you and your career?
The experiences I’ve had in the last 10 years with these companies shows that discovery never ends. Nothing is concrete. In terms of the title, it’s definitely not my legacy. It’s the legacy of the theaters I’ve joined. For me and for these theaters, it’s like that search and discovery never ends. That’s my biggest thing about the ballet world. We cannot rely on our Swan Lakes. And I don’t have any answers. [Laughs] That’s the sad thing. I only have experience. I think there’s a difference, and I can only share what I’ve learned and at this point I have a certain responsibility to do that. 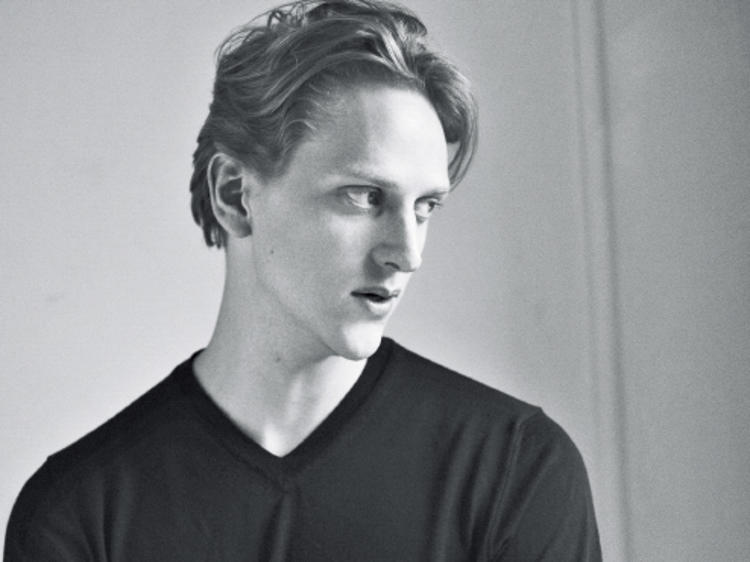 In "Legacy," ballet star David Hallberg hosts a variety of international ballet companies that have made impressions on him throughout his career. The program includes performances by dancers from the Mariinsky Ballet, the Bolshoi Ballet, the Australian Ballet, the Tokyo Ballet (in its U.S. debut) and the ABT Studio Company.