The new STARZ series Flesh and Bone pulls no punches. In fact, depending on your tolerance for creeps terrorizing young women, you can almost feel this dark soap opera hitting you directly in the face. Created by Moira Walley-Beckett—the celebrated Breaking Bad writer and producer—the show wastes little time in letting us know our heroine Claire (the young discovery Sarah Hay) is escaping an abusive past, and that the New York ballet company she joins may prove just as cruel. In the first episode alone, we see drug dependency, terrible behavior by a villainous artistic director, close-ups of Claire's gruesomely damaged toenail, copious female nudity, and barrels of sexual harassment and coercion. A little freaked out, we spoke first to Hay and then danseur Sascha Radetsky about their own ballet experiences and the terrifying world of dance; Hay dances with the Semperoper Ballet in Dresden, and Radetsky—a familiar face to anyone who saw and loved one of the iconic dance movies Center Stage—retired last year from ABT. 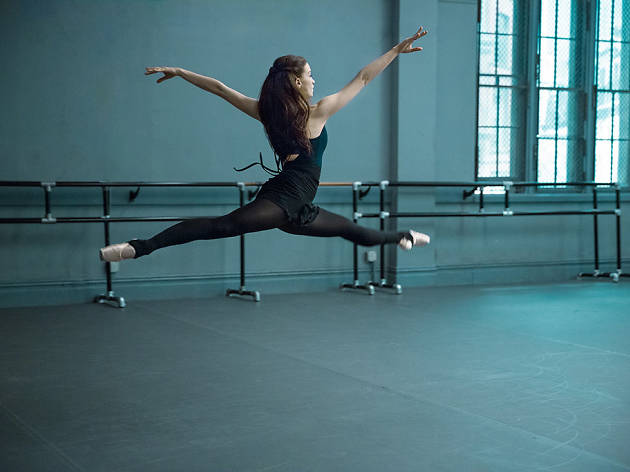 The first episode makes the audition process seem like mental terrorism. Was it that bad for the show?
Sarah Hay: [Laughs] There's always very high tension with dance auditions! You're in a group, watching the people in the front of the room, hoping you'll get something, anything that will relieve a bit of the stress. For this, everybody in there was thinking 'Is this my big break?' But in auditioning for the show, I actually found the people were a bit more open, and the environment was more intimate than for a ballet audition. I was lucky—I was found right at the end, so I missed the whole cattle call.

You were a dancer suddenly thrown into the world of acting. Were you concerned?
Sarah Hay: I was a bit worried about the emotional scenes, I wondered, 'How am I going to start crying?' But then I found it was often harder to do normal dialogue, just being friendly to people was harder than the crying—let's say for drama, I'm in the right place. I do love to play a role, and right now I'm doing Manon Lascaut [in Kenneth MacMillan's Manon] and I'm really enjoying that! She's a whore, she's sold, she's dying for her love…there's so much anxiety! I'm playing her when I get back to Dresden; thanks to the show, I feel more confident than I have before. Maybe I have a talent I didn't realize!
Sascha Radetsky: Gosh, we wrapped the show in August of 2014, which was ages ago! So it's interesting that all this attention is happening now—when we've moved on to other things. It's not so fresh in our minds and our bodies. I'm doing a little bit of acting, but I can't really say it's going to be a career, or even that I'm really suited to it. It's a whole other craft you have to study and be passionate about. I have other interests; I wouldn't say 'no' to acting—but I'm trying to do some writing, and I have a fellowship at the NYU Center for Ballet and the Arts to write some fiction. 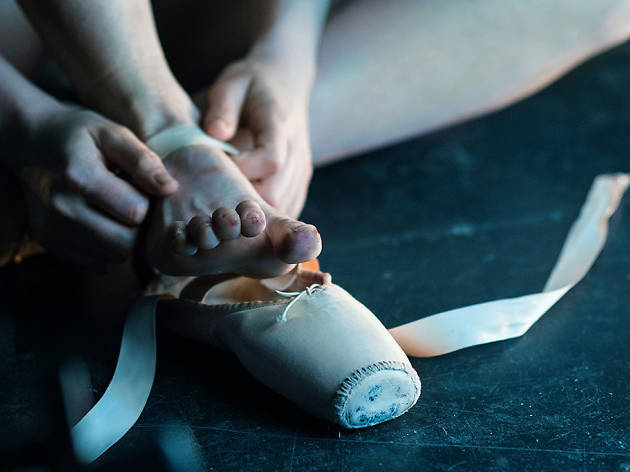 Sarah, you get naked in this show very, very soon. How did that go as a first time actor?
Sarah Hay: Basically, we had a discussion beforehand, but I didn't know the level at which she'd be naked. But honestly, it was liberating. As a dancer, I've always been considered too heavy or too curvy, so getting to feel confident and free was wonderful for me. Still, it's scary: there's a whole crew, and extras.… I'm naked in front of a lot of people.

How accurate is the show?
Sarah Hay: Everyone asks about the toenail! And yes, [Totally blasé] I've lost a few. That just comes with the shoes.
Sascha Radetsky: I think my buddy and colleague Ethan Stiefel (the show's choreographer and fellow Center Stage alum) put it well when he said that most of the characters we see in Flesh and Bone exist somewhere in the ballet world, just not in the same studio all at once. 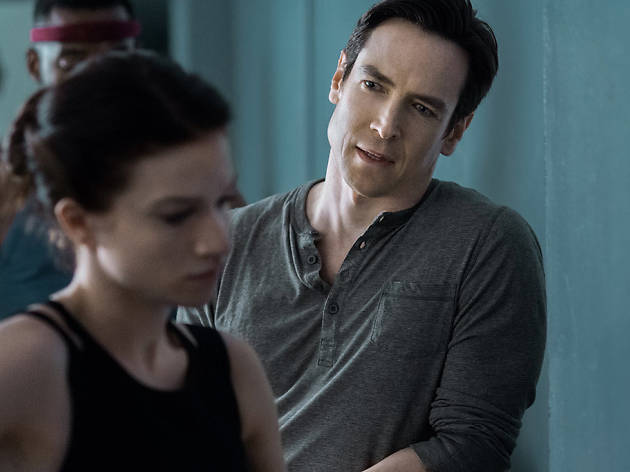 But that's terrible! The artistic director is an autocratic monster! Is this really what the ballet world is like?
Sascha Radetsky: Well, I think that by necessity there has to be a hierarchy, a director has to make decisions and have that freedom to make changes and to execute his vision. But the directors for whom I've worked [at ABT and Dutch National Ballet] were both nice guys [Laughs] and very approachable! I've been around enough to have come into contact with those people who can get drunk with power and cross lines from time to time—but I can't really comment the state of ballet companies in general, I can only tell you what my personal experience has been.
Sarah Hay: There are a lot of male directors, it's true. It's traditional that way, though I've worked with one female director—and they tend to be a bit feminist! And yes, then the environment is easier for the girls. When it's straight older men, they have power complexes; I've worked under the best and the worst. And it's true for other roles too: the choreographers and ballet masters, the people who were stars, the people who wish they were stars. I'm hopeful, but I don't know if it's getting better.

Moving into the world of television in this way, do you feel like an ambassador?
Sarah Hay: There are a lot of standards that women have to deal with in this industry—you have to fit the mold, and people are not healthy. It's an art form that's ancient, so old-school and traditional, but where I currently work, in Dresden, they have a vision of uniqueness about their company. My director wants people to be healthy, and there are 'perfect' body things he can easily drop—like my having boobs! He accepted me. I'm definitely happier dancing in Germany; in the U.S., there's a different level of competition. I find in general that I try to get my voice heard about protecting women. It comes from everything I've been through personally—I'm opinionated, and that doesn't make it that easy.
Sascha Radetsky: Gosh, I would say that's more a mantle Misty [Copeland] is wearing. I'm not in the public eye, as much attention [as] Center Stage has gotten. Still, it does have legs! I guess I have gotten good responses from people who were inspired by Center Stage—people who were inspired to pick up dancing, or simply [to become] educated in dance itself. 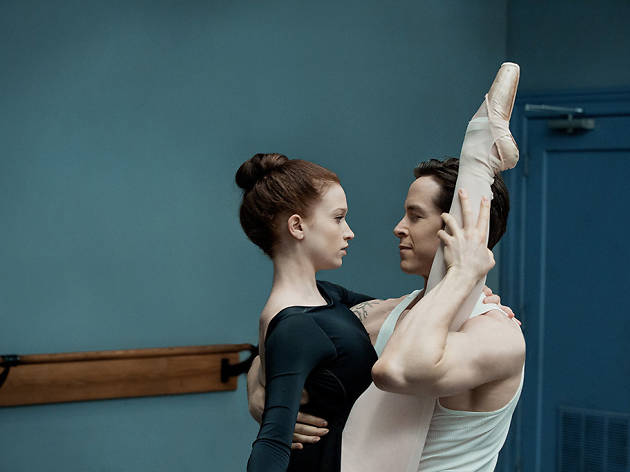 Certainly in Center Stage and Flesh and Bone you can see that the people dancing are dancing.
Sascha Radetsky: Faces and arms! That's my pet peeve!

Do you think it's valuable to show a ballet world that's so exaggeratedly dark?
Sascha Radetsky: I hope that people understand the dance movies like Black Swan or things like this show—are a perspective, are a take. It's designed to be entertaining! All the many wonderful aspects, like the bonds between dancers, the mutual support, the joy and the excitement and adventure—just don't make as compelling material. I think that's why we see more of a focus on the competitive element; that's why we see the suffering. That's how I rationalize it all. If we can broaden our audience, show dance to people through the medium of television or film, it's worth it. 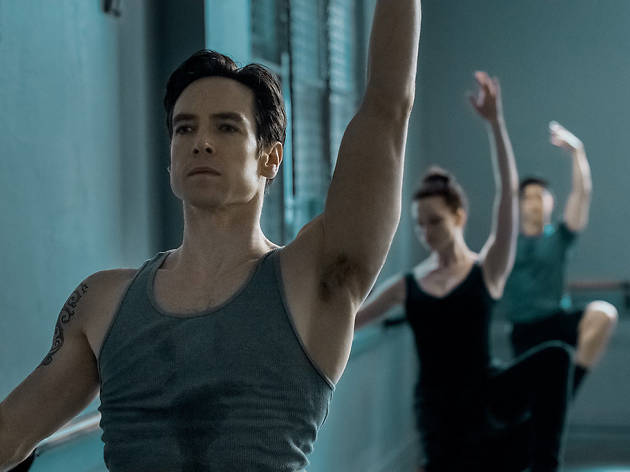