Leanne Cope trades in the Royal Ballet for Broadway

The ballerina stars—and sings—in An American in Paris, directed and choreographed by Christopher Wheeldon

Leanne Cope, who stars as Lise in Christopher Wheeldon’s anticipated production of An American in Paris, is feeling some pressure, and it’s not just about trying to live up to the cinematic memory of Leslie Caron. “I’m not a name,” she says of her standing at the Royal Ballet. “I’m one of many swans, one of many snowflakes.” But for this gamine 31-year-old dancer, the part of Lise is as nuanced as the dramatic-ballerina roles she most treasures. Plus, she gets to dance with New York City Ballet’s Robert Fairchild. She’s having her moment, and it’s just wonderful.

What made you want to take a leave from the Royal Ballet for this show?
It wasn’t like I thought I need a new challenge, I want to find something. It just happened. I got a message from Chris saying, “I’m doing a musical and I heard that you used to sing in the choir at school. Would you like to sing for me?” It was between a double show of Swan Lake that I sang for him in the shower room at the Royal Opera House.

What did you sing?
“The Man I Love.” I didn’t think anything of it at the time. A couple of months later I got an email from a casting agent saying that Chris wanted to see me again. At the top of the email, it said, “American in Paris.” I was like, Oh!

How did you get the part?
The final auditions were in New York. It was like I was in my own movie. I turned up at this place and there’s Sound of Music in one room and Oklahoma! in the other. I danced with Robbie. I didn’t recognize him; even though I’m from the ballet world, the European ballet world is quite separate from the American one. I thought, Wow, this guy’s pretty good.

That’s funny.
I googled his name and was like, Oh my God—I’ve just done a pas de deux with a New York City Ballet principal. If nothing comes of this, that’s amazing. [Laughs] I’m corps de ballet in London and I don’t get much of a chance to dance pas de deux work. That’s what you want to do, to feel weightless and lifted and have a relationship with someone onstage. As I was packing up to leave the following day, the assistant choreographer said, “They just want to say goodbye, because they know you’re flying back to England today.” They said, “Thank you so much for coming, we’d like to offer you the job.” I literally just fell on the floor.

How do you see your character?
When I watched the film, it was daunting, because Leslie Caron is perfection. It’s an obvious thing to say, but she’s so French! [Laughs] How am I going to approach this as a clumsy English girl? The one thing we have in our favor is that we’re not trying to re-create the film. Our show is set at the liberation of Paris, and Paris is in a bit of a mess, and so are all the characters. It’s about finding that spirit of life again.

How so for Lise?
She was hiding during the war because she’s Jewish and her parents were taken away; she has not stepped on the public streets of Paris for four or five years. The war started when she was 14. She’s now 18. She’s kind, she’s caring, and she also has a sense of guilt. Why did she survive? I think she feels that weight on her shoulders.

When did you first meet Chris?
At the Royal Ballet School. I danced one of his ballets for my school performance when I was about 14. I remember running and literally face planting. When I joined the company, early on, I was in DGV: Danse à Grande Vitesse. I fell over in that in opening night as well!

I like dancers who fall. Did you fall a lot?
I’m very clumsy.

But it also means that you’re going for it.
Yeah. I was definitely going for it that night. I thought, This is my chance! Christopher Wheeldon’s ballet! I’m fresh out of the school. I run on and I go straight down. I was so apologetic to him. He probably doesn’t remember this at all.

Do you wonder where this will take you as a dancer?
We did our first preview on Friday and when I left the stage door it was like, “Are you going to go back to the Royal Ballet?” Well, yes, I’m contracted to, but I’ve only done one show! I can’t make that decision right now. Of course, the Royal Ballet is my heart, my soul, my family. But this has definitely opened my eyes to other possibilities. I won’t be going back to dance principal roles, whereas here I’m dancing a principal role every night.

It’s tricky.
It’s really tricky! There’s still so much at the Royal Ballet that I’d love to do, I just don’t know if I’ll have the opportunity. This show isn’t necessarily the thing that will make them think, Maybe she can do Juliet or Manon. I think I’m a late bloomer. A ballet teacher told my parents that.

Why?
I struggled at the Royal Ballet School, because I’m not physically that right for ballet. I barely have a plié, my Achilles is so short. My hamstrings are very tight. I just kept going because I loved it. I’m thinking maybe she was right. I am a late bloomer. I’m doing the thing I was supposed to be doing. [Laughs]

But you are a first artist with the Royal Ballet, and you’ve worked closely with Liam Scarlett, right?
Yes. But at 25 to have just been given your chance—that’s late. I had a long time of not getting anything until Liam came. He gave me that confidence to be theatrical onstage and to act and to push my boundaries a little bit, and I think Chris saw that and realized, She might not be able to plié, but she can do that!

But roles like Juliet and Manon are the dream?
Yes. Yes. I’ve never ever wanted to be Aurora or Odette-Odile. For me, it was always the more human roles, the people. Never a tutu, never a princess, never a fairy. What Chris has created within American in Paris—I’m like, This is my Juliet moment. This is my Manon moment. I have all those ballets in this. It’s been made on me, and it is a dream. 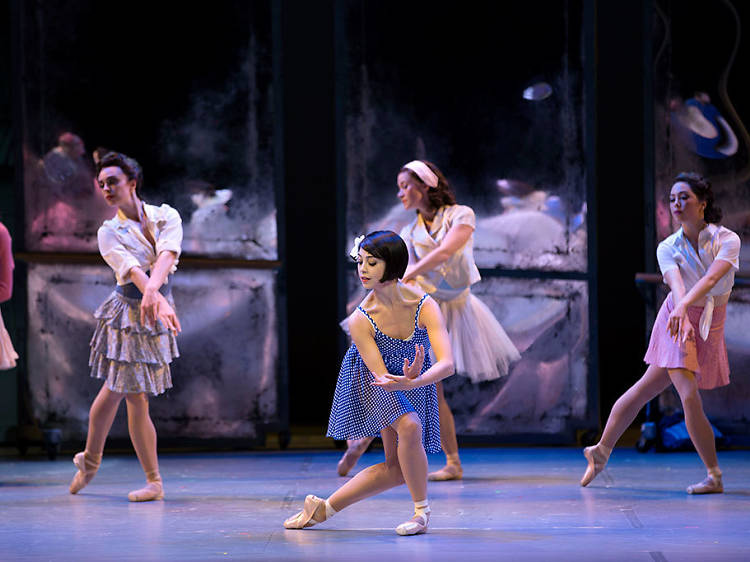 An American in Paris

Adding to the season's minicrop of classic shows (On the Town, Gigi) comes this stage adaptation of the 1951 Gene Kelly movie musical. With a score of swinging Gershwin tunes ("I Got Rhythm," "'S Wonderful") and new choreography by Christopher Wheeldon, the tale follows an American GI in the City of Light falling hard for—what else?—an enchanting young French girl.