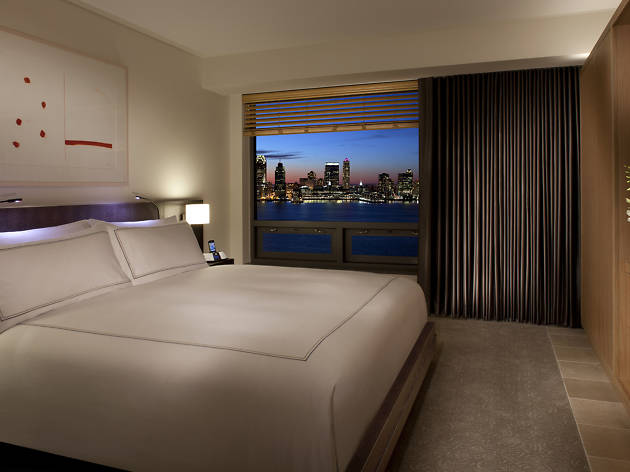 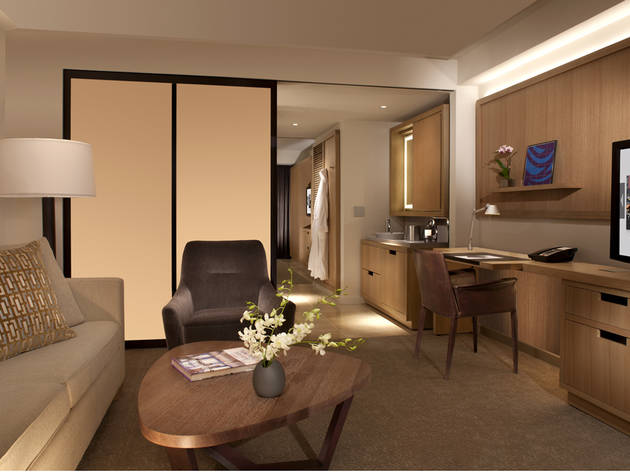 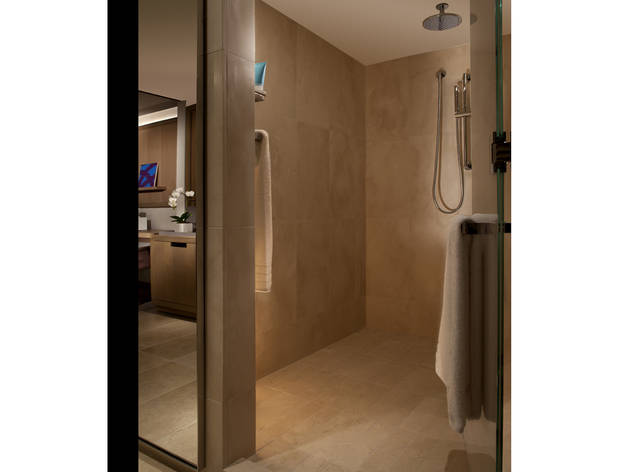 As far as Manhattan goes nothing is more valuable than space. When battling the daily rush of claustrophobia from the subway, to museums, to Times Square, finding a hotel that is removed from the sheer deluge of humanity is worth its weight in gold.

With a towering 15-story, marble floored, almost Star Trek-esque lobby, plush suites and open views of the Hudson, the Conrad Hotel in Battery Park serves as an ideal escape from the city, even though it’s perfectly situated in the heart of the Financial District. The Hilton offshoot features 463 spacious two-room suites, with parlor rooms and showers that feel bigger than the hotel’s elevators. Indulging in a Hudson River View suite offers a peaceful look at New York’s waters, which you can also view from the spectacular Loopy Doopy Rooftop Bar, which features light vittles and complementary selfie sticks for sky-high gratification. The drinks, like bourbon-based Sunglasses At Night are heavier than their breezy descriptions would suggest, are certainly whimsical but may not be worth the $18 price.

The real showstopper of the Conrad is its collection of more than 2,000 pieces of tasteful art, namely the 100-by-80-foot Loopy Doopy (Blue and Purple) by Sol LeWitt that hangs in the atrium lobby. LeWitt’s example sets the tone for the design of the hotel, which also features a rich Pat Steir’s vivid Topsy Turvy by its Gallery Ballroom.

Though the hotel doesn’t have a pool, it features a well-maintained 24-hour workout room, gift shop and even a barber shop, which is popular with locals. Atrio, the hotel’s wine bar and restaurant, offers plenty of options on its menu, like the “Ashley Farms” Roasted Half-Chicken ($26) and Homemade Penne ($28), but for the same price there’s much more innovative and interesting fare—with better service—at restaurants in the surrounding neighborhoods. Stick with the affordable breakfast buffet and plan your dinners on the town.

TIME OUT TIP: Snowed in? Head to the Regal Battery Park Stadium 11, a movie theater conveniently connected to the hotel lobby that features fully reclining seats. You can also grab a burger at Shake Shack (located in the same complex) or walk across the street to do your gift shopping at the Westfield World Trade Center shopping center.