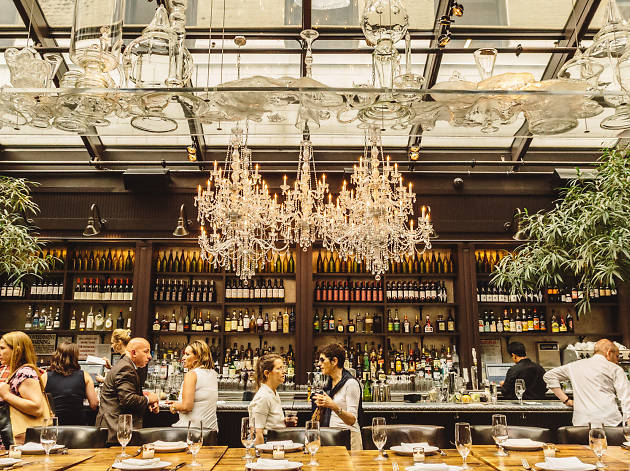 Hotel? Or enchanted forest sandwiched between two buildings? When you first encounter the NoMo SoHo hotel on Crosby Street near Grand, you’re going to wonder. Its entrance is marked by high-arching steel columns wrapped in vines and adorned with giant lanterns; beyond which lies a heavily “wooded” outdoor seating area with small trees that serves as al fresco dining for the hotel’s eatery, NoMo Kitchen. Walk a long walkway, covered overhead in vines and beautiful white lights, and you’ll get the feeling you’re not in Kans, er, New York City anymore. But once you’re actually inside, it’s New York all the way.

The lobby buzzes with cliché New York hotel moments, that I’m all in favor of: a young fashionista sitting next to packages while texting, racks of clothing gliding by on the way to a possible photo shoot, a person reading the complimentary Wall Street Journal with coffee in hand, stylish professionals criss-crossing paths—not a bad scene for a Monday morning. The lobby is spacious with a clean look with large white columns, black leather chairs, oversized ottomans and iconic ‘80s-era photos adorn the walls—one of which is Madonna and Beat writer William Burroughs—an ode to the downtown art and music scene and an era so ingrained in the neighborhood. The NoMo keeps true to the grit of the city with infectious energy that welcomes you in.

The color scheme of the rooms and halls are white with different shades of blue: royals, lights, periwinkles. Oversized windows drench the rooms with sunlight giving everything an airy feel, which contrasts the dimly lit halls with large oval-shaped mirrors. On the main level lies NoMo Kitchen, a contemporary American restaurant sitting off the lobby and along the walkway entrance. Inside, the ceiling is all glass with huge chandeliers that glow from the sunlight; a mix of beiges and browns give off a golden hue and the communal table in the middle gives the restaurant a comfy feel. With a cocktail program helmed by mixologist Xavier Herit (of Daniel, Wallflower fame), NoMo Kitchen is garnering the credos as a player in downtown dining.

Soho is perfect any time of year for a shopping and eating excursion with access to transportation just a walk away from the hotel. One block south on Canal Street you’ll find the N, R, Q, W trains (@ Broadway), the 4, 5, 6 trains (@ Lafayette Street), and J, Z lines (@ Centre Street). The Manhattan Bridge is easily accessible via Canal as is the Holland Tunnel from New Jersey.

TIME OUT TIP: The NoMo SoHo is one block east of Broadway, where you will find all your major brands (Top Shop, Bloomingdale’s, Victoria’s Secret, H&M, Banana Republic, etc.) that stretch north to Houston Street and beyond. But it’s the smaller stores and hidden gems that are the draw. Up Crosby between Broome Street and Grand is a Fellow Barber, a trendy barber and groomer shop to get a fresh cut; right next door is a Bonobos to pick up an Italian top coat or cardigan sweater. Head over to Michael White’s Osteria Morini across from Petrosino Square (on Lafayette Street between Kenmare and Spring Streets) and sit at the bar for lunch.

Really surprised ! I had to book last minute and WOW what a view! Lovely last minute stay! Booked on Hotels Tonight.