Seeing a show in the New York International Fringe Festival is always a roll of the dice. Will you catch the next Triassic Parq or Silence: The Musical? Or will it be more like the next "damn, I wish I had those 90 minutes back" moment of your life? For those limiting this year's Fringe shows to gay-friendly ones, your very queer choices are contained below. 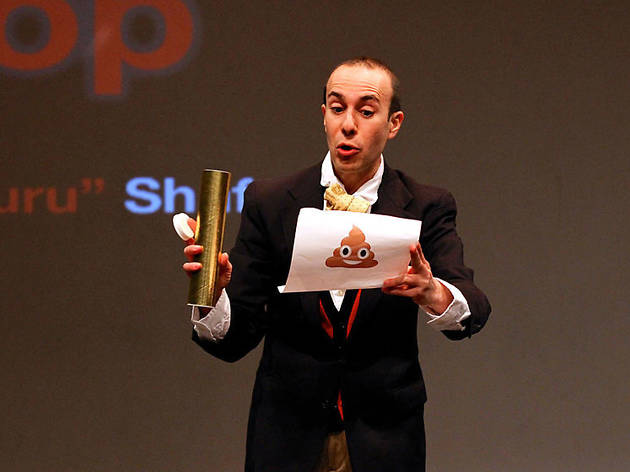 The buttoned-up Dr. Oscar von Shtein bounds into the room to deliver a FRED Talk on the classics. His cards are set, his water is in place, his projections are in the toilet: It seems they’ve been hijacked by a mysterious force called Puru, which we soon learn is a guru of poo. Writer-actor Shawn Shafner gleefully toggles between von Shtein and the Puru, whose mission is to communicate the surprisingly fascinating physical and cultural history of defecation and link it to such modern ills as body shaming. 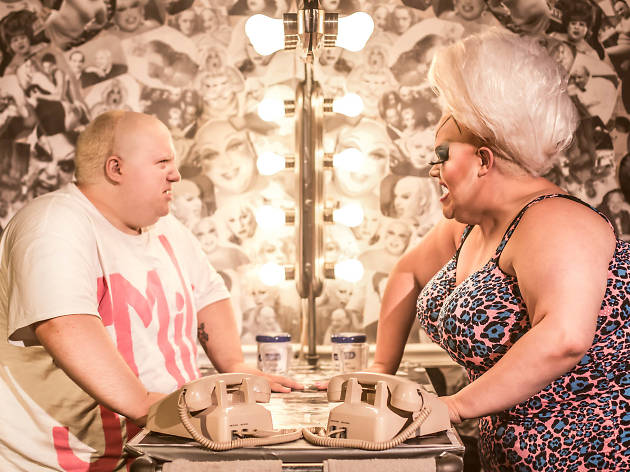 Mirror, mirror, on the wall: Who’s the saddest queen of all? E. Dale Smith’s Divine/Intervention finds John Waters muse and trash icon Divine (Bobby Goodrich) on the eve of her death in 1988, facing off in a hotel looking glass with the man behind her glam-grotesque makeup and flab-fabulous outfits: Harris Glenn Milstead (the touching Ryan Walter), a shy, heavyset gay man who has long vanished behind his alter ego’s outré bravado but now longs to be taken seriously as a male character actor. Conceived and directed by Braden Chapman (who has his own drag life as Mimi Imfurst), the play asks whether either side of this Jekyll/Hyde combo can survive without the other, and smudges the dividing line between them. 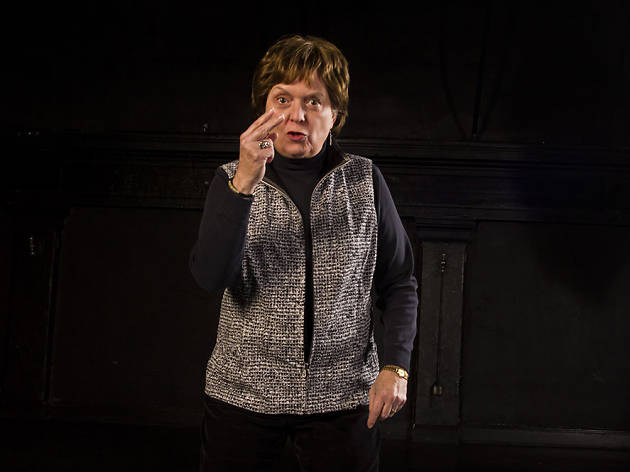 In this smart, moving autobiographical solo show, Christine Howey takes us from her infancy (the performance opens with a projected slide of Howey as a baby) through middle age, when she completed her gender transition. Along the way, we learn about her failed marriage, her dalliances with cross-dressing and drag, and her frequent obsession with suicide while she was coming to grips with her identity. The show is based on the performer's poetry, adapted for the stage by Howey and director Scott Plate. For the most part, the material works well, with poetic flourishes that are barely noticeable. 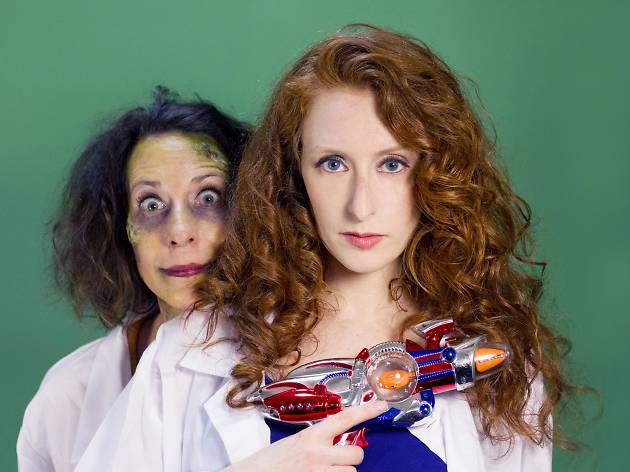 Megan Sass’s musical is an ambitious endeavor by the rough-and-tumble standards of the Fringe: The writer-composer plays a lovesick woman who gets dumped by the boyfriend she builds and winds up in a battle to save humankind. The show's madcap sci-fi fun includes geek-pleasing callouts to Star Trek and Battlestar Galactica—it is even hip enough to include a Black Mirror joke—and features an impressive cast. Sass is very appealing as she strums an acoustic guitar and waxes euphoric about “My Robot Boyfriend.” As her lesbian zombie assistant, Piper Goodeve provides singing that itself would be worth the price of admission; Darren Bluestone’s woman-made man is credibly handsome, and Bethany Faye’s sunny simplicity as a barista is an enjoyable counterpoint to Sass’s angst. 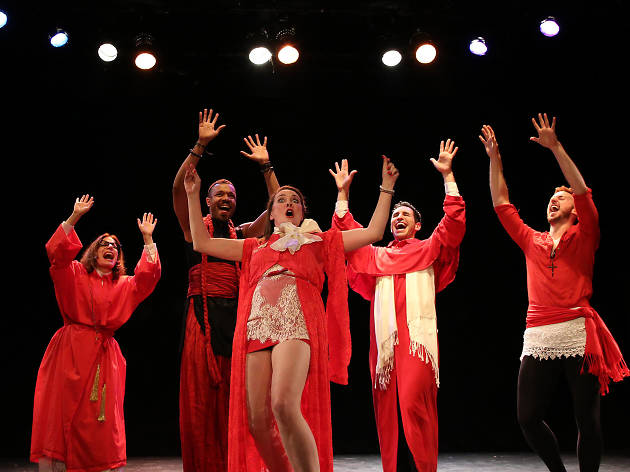 As any ex-altar boy can tell you, there’s only one world religion with the fabulous dresses and conflicted sexuality needed for a big, fat musical: The Catholic Church. In composer-lyricist and book writer Adam Overett’s sinfully silly Popesical, eight clerics compete beneath the Sistine Chapel to be Top Pontiff. Since the recently croaked Pope was quite generous in handing out red beanies, you have a Jewish cardinal (David Perlman), a Chinese Buddhist one (Jason Veasey), and trashy ladies from the South (Danette Holden) and New Jersey (Alexa Green). Then there’s nice Irish boy Cardinal McCafferty (Stephen Christopher Anthony), struggling hard to hide his man love. 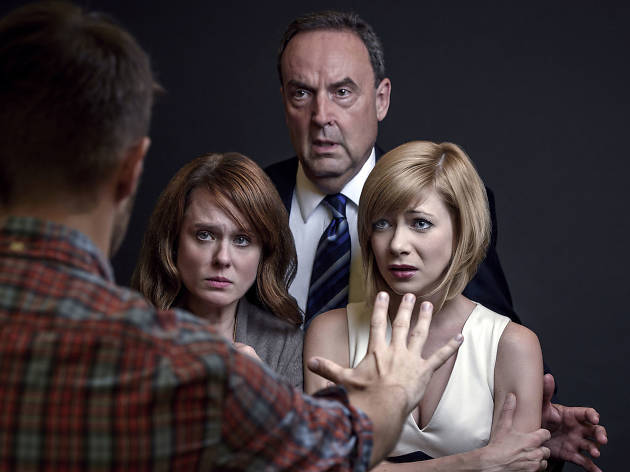 Jittery Adam (Ryan Nicolls) and stoic Iraq vet Andre (Reginald L. Wilson) burst into a bank and compassionately take its small staff hostage, only to find themselves besieged by media and law enforcement in Stockholm Savings, an update of the classic 1975 robbery-gone-awry film Dog Day Afternoon. Michael DeMeo’s script hews fairly closely to Frank Pierson’s screenplay and retains some of the movie's acidic power. But the modernization brings problems of tone: The play’s treatment of Adam’s transgender wife remains curiously stuck in the '70s while attempting to reflect modern racial issues—African-American Andre is scapegoated for the robbery, and Adam chants “Hands up, don’t shoot”—often seem simplistic; they also don’t cohere well with DeMeo’s clumsily on-the-nose satire of media spin. 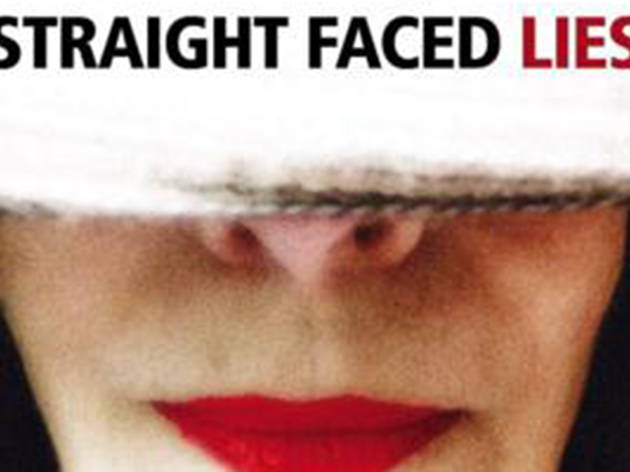 Straight Faced Lies, a family drama about a heated Thanksgiving dinner, begins as a more than normally dysfunctional clan gathers in anticipation of dad coming home from prison. Controlling mother Cathy lives with her son, James, whom she still treats like a child even though he pays their rent. They are joined by boozy Aunt Marie, who is soused and spilling cocktails on the floor, and rebellious daughter Melissa, who has decided to join them at the last minute. Both brother and sister are keeping secrets: he's gay, she's pregnant.
Read review
Recommended