Willam talks about losing Drag Race and winning the Internet

Being kicked off of a beloved reality show for breaking the rules isn’t a typical path to comedy stardom, but getting the boot from RuPaul’s Drag Race seems to have done just that for Los Angeles comedy queen Willam Belli. Since running afoul of Mother Ru, Willam has racked up millions of views for his over-the-top (and surprisingly well-sung) music-video parodies, and he’s landed endorsement deals with American Apparel and Sephora. He’s also brought his singularly shameless comedy show to stages around the world. He called us while driving in Orlando (“Fuck you, tolls!”) to tell us what we can expect when he takes the stage at the Gramercy Theatre on April 18.

So why is there only one i in Willam?
It's a family name. My grandfather's name was Felipo. But when he came over here from Croatia, the nun said it wasn't a real name, so his dad just picked the name of the kid in front of him. That was William, but they had a big old accent so they couldn't say it, so it became Willam. So when it came time to name me, they just named me Willam.

Before your drag career took off, you were doing a lot of TV work, right?
Yeah, and I don't do it anymore. I mean, I say yes when I'm offered stuff, but now transgender people actually play the transgender roles on TV instead of me—which is amazing for the community. It's a fucking kneecap for my career, but it allowed me to reinvent myself to do what I love doing now, which is basically to be a clown. I always wanted to go to clown school when I grew up, but I heard they drug test, so I was like, No, fuck that. So now I have the ability to do that, and just make people laugh and have fun.

What were some of your TV roles?
Prostitute to the Left, Prostitute No. 2, Dead Hooker. [Laughs] My favorite shows, I think, were Nip/Tuck—any Ryan Murphy show that I did. I did Nip/Tuck and The New Normal. I did an HBO movie called Cinema Verite where I played Candy Darling. That was really, really cool because I got to meet James Gandolfini and Diane Lane and Thomas Dekker. It was a great movie, but it was the year that Mildred Pierce was happening, so Mildred Pierce got all the fuckin' notices.

A lot of your work has been online. Is that lucrative?
Um, calling it work is a strong word for what I do. I've bought three vaginas and a Tesla. Yeah, it's lucrative. It's crazy to go to American Apparel in Tokyo and have people recognize me and to be in Australia and have people there with the Sephora OCC ads for me to sign. It's cool that the Internet has helped me maintain a presence and score these legit marketing things. I feel like I won the Internet. I might not have won Drag Race, but I won the Internet.

What's the story with you getting kicked off Drag Race?
Sometimes it's better to make a mark than to hit your mark, and I think I realized that early on. I went into it thinking I was going to screw things up, and knowing that I had some tricks up my sleeve. But when I walked into the workroom I was like, Oh my God and just, like, smelling RuPaul and all that stuff. I was like, This could be it! This could be my moment in the sun! And then by the time 20 minutes later happened, I was like, aww, fuck this. I'm writing a book, too, by the way. It's called Suck Less: Where There's a Willam, There's a Way. It's all gonna be in there—the reasons, what I did, all that stuff.

Are you still in touch with anyone from the show?
I am, yeah. I'm actually really good friends with my story producer.

Any of the other contestants?
Yeah, I talk to all of 'em, I guess. I mean, I'm not friends with some of them because we're not in the same proximity and I keep normal-people hours and some people keep drag-queen hours. But any time I see any of the girls from my season, it's always been a hug. Probably.

Did your group DWV come together before or after Drag Race?
We were all in a band called Tranz K together, and we were openers for Metal School and Steel Panther at the House of Blues. We had a residency there. We were kind of like a fun L.A. band. Venues loved us because we were crazy and we brought in a gay crowd, but we also entertained their straight customers. DWV was a little offshoot of that.

Why did you guys end up breaking up?
Uh, basically we didn't want to work with each other anymore.

As simple as that?
We broke up for all the reasons girl groups break up: Mathew Knowles was fucking all of us and none of us wanted to be the Michelle.

Since then you've done some stuff with Alaska and Courtney Act. Is that your new group?
We are officially taking it as it comes. Courtney and I feature on Alaska's album, and they're featured on my album, which comes out in May. So we're officially unofficially a thing.

Do you prefer working with a group or solo work?
I don't know if I have a preference, really. It's always fun working with friends. I love group action, though! That could be a Craigslist ad.

What can people expect at your show in NYC?
I like getting kicked out of shit. I got kicked out of the Battle of the Seasons tour—

Oh really? How'd that happen?
Well, I went on the first tour, and then I was not allowed back on the second one. Someone with power said Willam is not allowed on this tour. There's two people who weren't allowed on it, Carmen and me. Who knows why. So I invented this little after party thing where I tour around behind them. I call it a "shafter-party" because I got shafted—and I'm hoping to eat some shaft!—and I’'m trying to get kicked out of my own show. I don't know if there will be fisting or not, but I'm hoping to fist someone onstage while I sing.

So will you be doing your hits while you do that?
I'm going to be doing the shits! I told you, I'm going to be trying to fist somebody! I am doing some new material off my new album, I'll be doing some old stuff. We'll see if I decide to sing it in English. It should be fun!

Speaking of that, why did you decide to do a Spanish version of "Boy Is a Bottom"?
I wanted to fuck Latino guys.

Uhhh, okay…
You think I'm joking! I'm not! I wanted to do it with Detox and Vicki, like a month after we released the first one, and we just couldn't get it together. It was really difficult with—you know how many variables exist with one drag queen, so imagine how many exist with three drag queens. We were all busy. And one's name was Detox, and the other one…she couldn't get two steps without needing a snack.

So do you avoid that word now?
Oh fuck no! No one's going to tell me what to say.

Do you have any comedy or drag idols?
Um, Rita Rudner? [Laughs] No. I really like Belushi. I would love to be the John Belushi of drag. He was fearless. He was way more talented than me, but I'm just as fearless and stupid. Him and Lady Bunny. God, She's just awful, and I love her. She'll say anything. She's gotten pulled offstage for jokes being too off-color and Goddamn I love that. So I'd say Bun Bun and Belushi. Maybe I'm kind of a combination of the two. And I like putting stuff up my butt, that's one of my favorite things. So maybe a little bit of Gallagher in there, too. In my last show at the Cutting Room I butt-chugged onstage. And for "Es Una Pasiva," the Spanish song, I put a maraca up my butt. And now I'm graduating to fisting, finally.

So you're really going to do that?
Yes. I definitely am. There's no reason not to, right?

I suppose not!
It's performance art, Goddamn it! Think how warm it will be inside there. 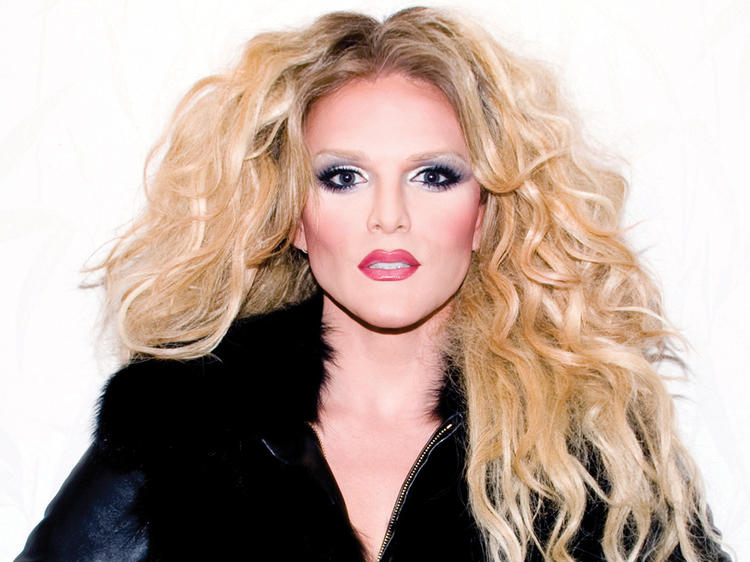 The only queen ever kicked off RuPaul's Drag Race also happens to be one of the funniest performers—and best singers—ever to come out of that show, and he's rightly become something of an Internet sensation, racking up millions of views with his song parodies and casually bitchy comedy.