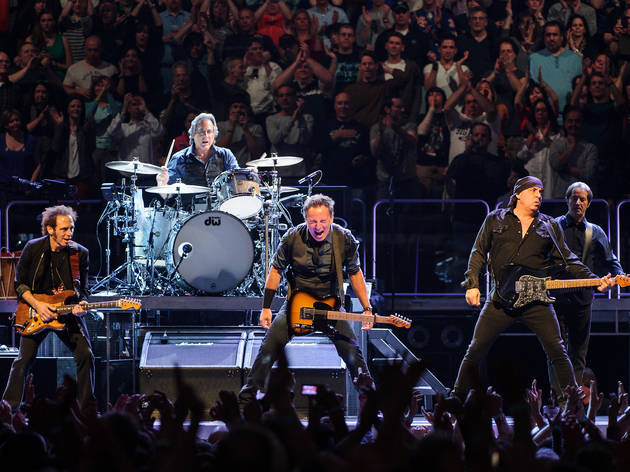 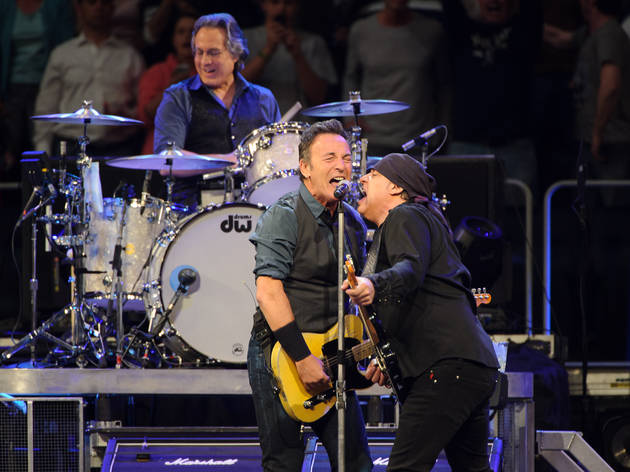 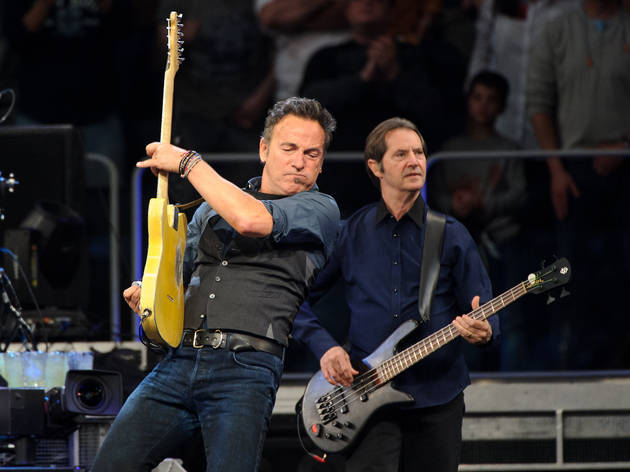 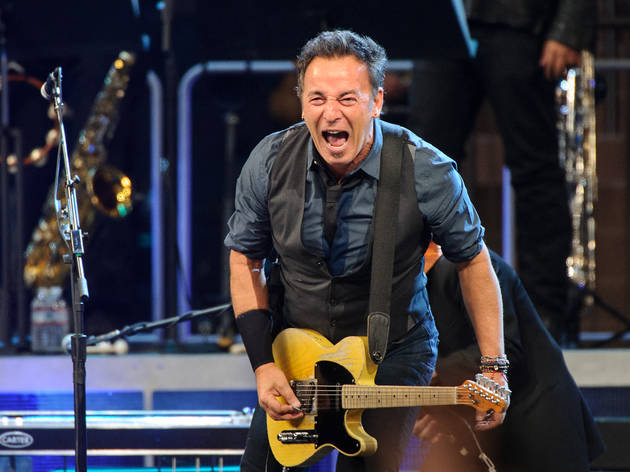 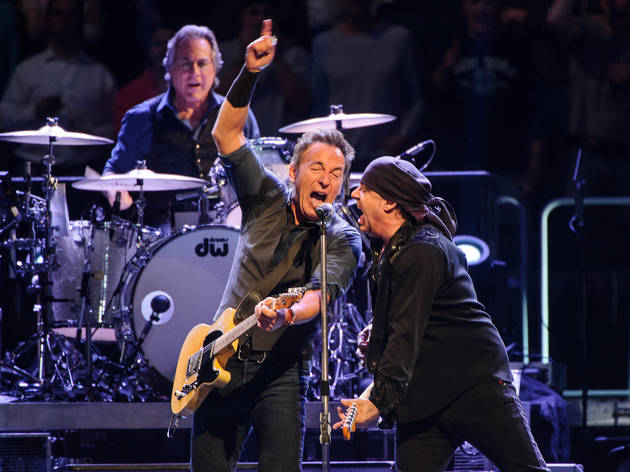 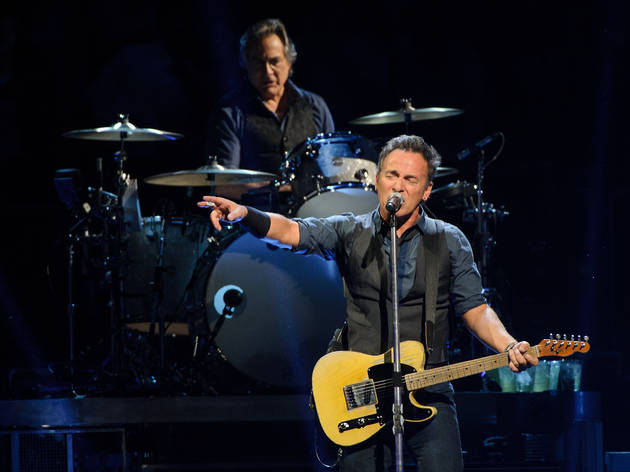 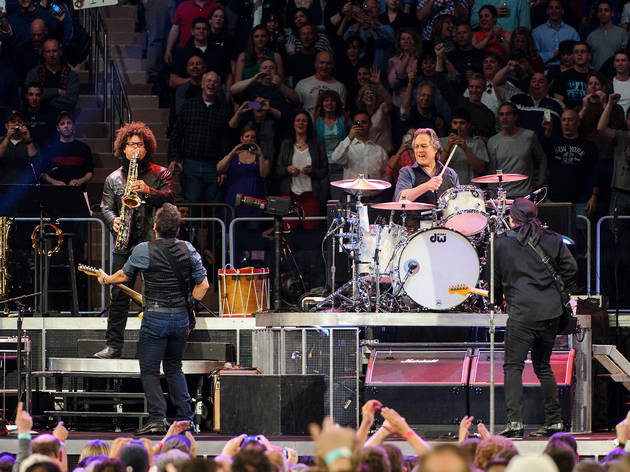 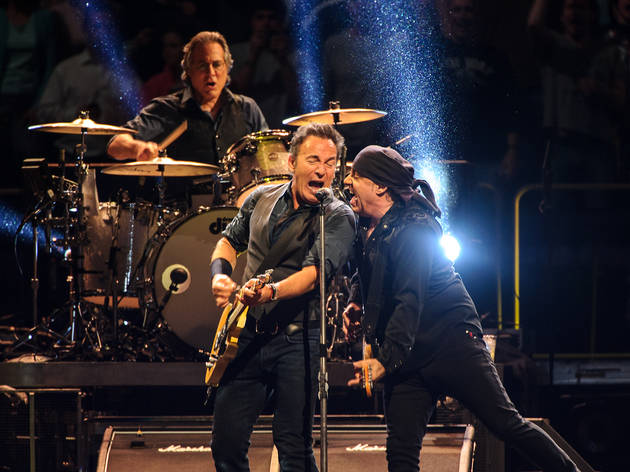 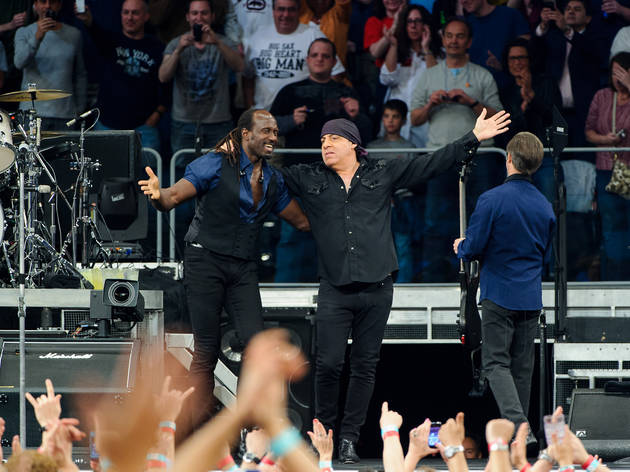 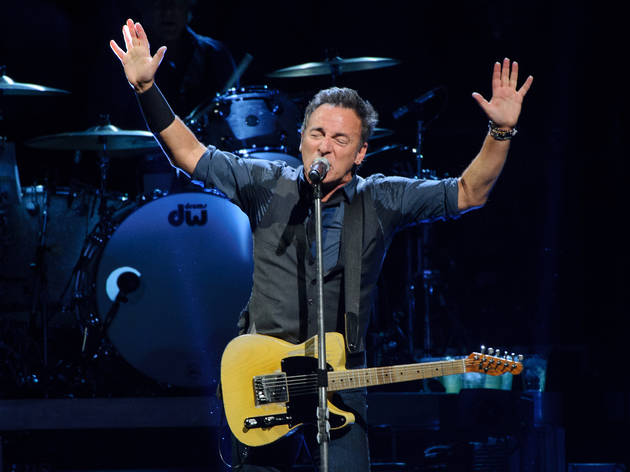 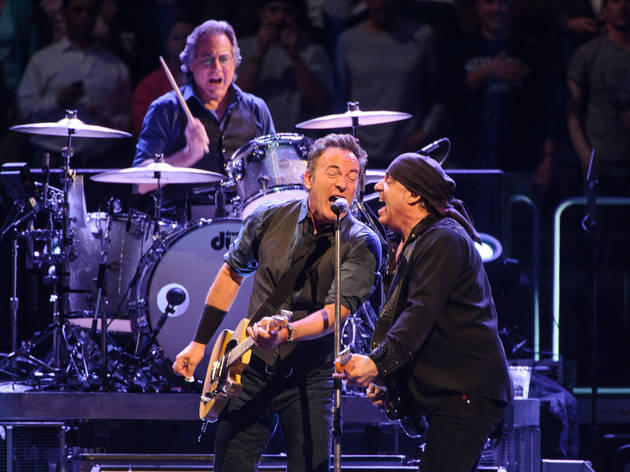 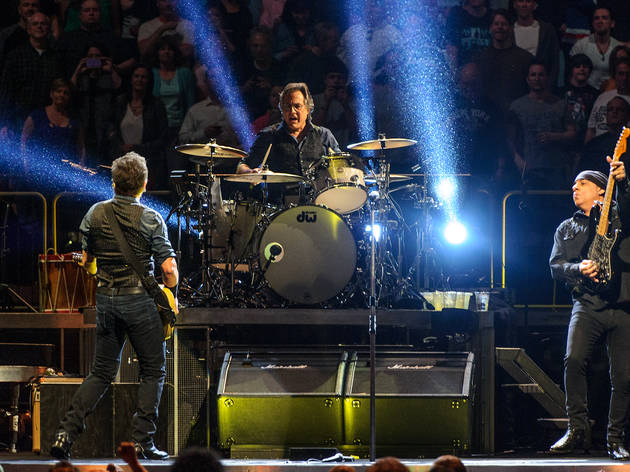 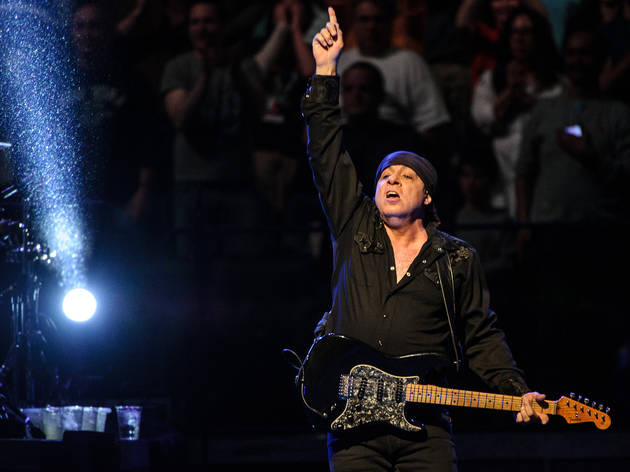 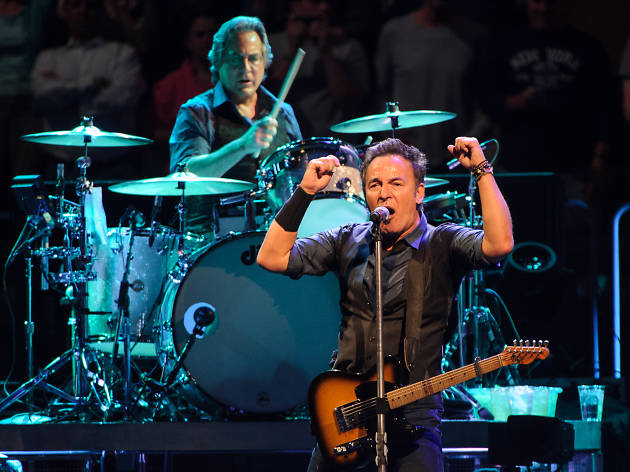 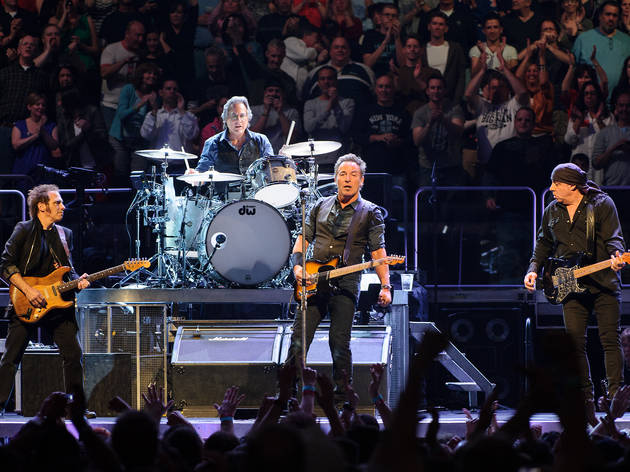 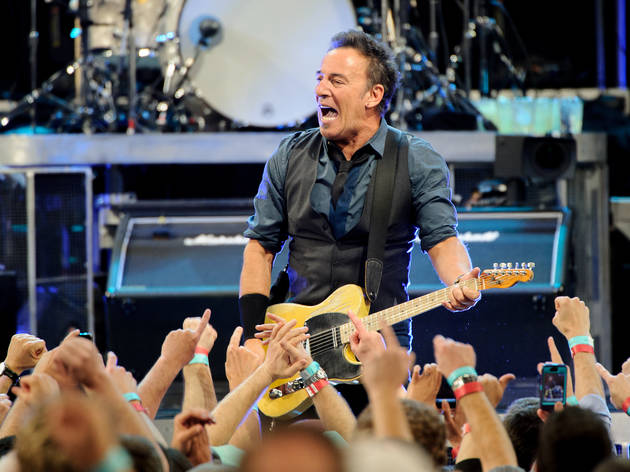 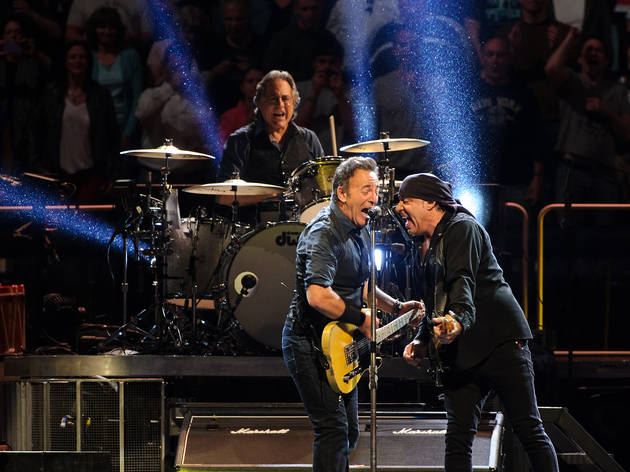 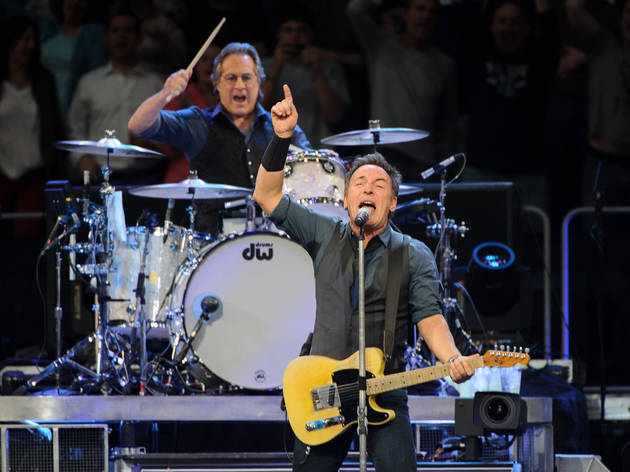 We came, we saw, we live-tweeted—we felt slightly ashamed that a man twice our age is in better shape than anyone we know—and we joined in the mass love-in that was Bruce Springsteen and the E Street Band at Madison Square Garden last night.

Anyone who's never been to a Boss show knows that anyone who has ever been to a Boss show will tell you it's like nothing else. One of the best shows you'll see, period. And that much becomes evident from the first song. Springsteen and band strode onstage last night to the tune of Sinatra's "New York, New York," and promptly launched into a thunderous, ecstatic "Badlands"; the house lights were on, the sing-along was ear-tingling, and it felt like an encore. When "Badlands" segued into a righteous "We Take Care of Our Own," it became clear that Springsteen would perform every song like it was an encore, at the last show the band would ever play.

Impressive stuff, and no less impressive than the crowd's determination to give it everything. Sexy moms in tight jeans wiggled next to dads with camera phones, kids in stars 'n' stripes bandanas and a good deal of actual children (more on them, later). A drunk, flushed guy at the bar talked loudly into his cell phone. (Yes, really Tony from The Sopranos in the seat next to me. And Michael J Fox behind me!) And TONY fave Questlove tweeted the whole thing (jist: "He is KILLIN IT").

Bruce turns 63 this year, and given that he's been touring the world for longer than most bloggers have been alive, it's fair to say there are certain things you can predict will happen at a Springsteen show—from the man's famous knee slide to the numerous audience-participation spots at every gig.

But the Boss is the Boss because he makes these moments feel special, personal, even. He pulls a little boy up on stage to sing "Waiting on a Sunny Day," as he's done at other shows; but as the kid's braces gleam in the lights, Springsteen whispers into his ear. "Come on, E Street band!" yells the kid, obligingly. The pair then jog over to the drum kit and Springsteen sponges water onto their jeans; they run at full tilt from one end of the stage to the other, dropping to their knees together at the song's climax. It's hardly old hat.

Similarly, when a sign in the crowd catches his eye, Springsteen grabs the poster, shows it to the band, and props it up on his mike stand. It reads "THUNDERCRACK FOR A BIRTHDAY GIRL!" And the next song is… Of course. With a happy birthday thrown in for good measure.

After singing while spread eagle on a speaker stack, Springsteen hops off the stage and runs into the crowd, wherein he stands on a railing and chugs a fan's beer. Again, we know he'll do this (it's become A Thing on this tour), but it's still exciting in its silliness. Springsteen has a way of affecting giddiness. His speaker's address at SXSW attested to this; the way he spoke about his love for Elvis Presley and doo-wop made both things seem cool and Azealia Banks new, somehow. And so we watched in delight last night when Springsteen took his second pint of beer and slurped it. And we were thrilled to be a part of the audience that bore a supine Springsteen, crowd surfing, to the front of the stage.

The show lasted three hours, and sagged a little at points; earnest, Irish-tinged songs from this year's Wrecking Ball fared less well than sing-along classics, which is to be expected. But bathroom breaks were few and far between. No one wants to come back from the bar and find they've missed "Born to Run."

Springsteen brings out the biggies for the show's final songs; "Rosalita," "Born to Run" and "Dancing in the Dark" come one after another and are absurdly, grin-defyingly wonderful. (Says Questo: "Awwww man!!! 'Born to Run' is like the 'Teen Spirit' for the 1970s.") He lifts a little girl out of the crowd for a dance, and MSG feels like a really big wedding reception party. There is high-fiving in the audience. Springsteen's shirt is shiny with sweat, and he has a look of satisfaction that one attains only postfifties.

And finally, there's a tribute to Clarence Clemons. For "Tenth Avenue Freeze Out," Springsteen snuggles into the crowd again; at the line ""When the change was made uptown and the Big Man joined the band," the E Street Band stops playing, and Springsteen salutes a video montage of his friend Clemons on MSG's JumboTrons. There is ringing applause for what feels like five minutes. And so, too, there is no lack of love shown for Clemons's nephew Jake, who has assumed his uncle's sax duties on this tour.

When the show ends, Springsteen stands by the onstage exit and shakes hands with each member of the band as they leave—a splendidly old-fashioned gesture—before taking the final cheer himself. Oh, and he says "Thank you" to the crowd—and this writer is struck by the thought that a performer might be genuinely grateful to their audience. At the final curtain, that is really what sets Springsteen apart.