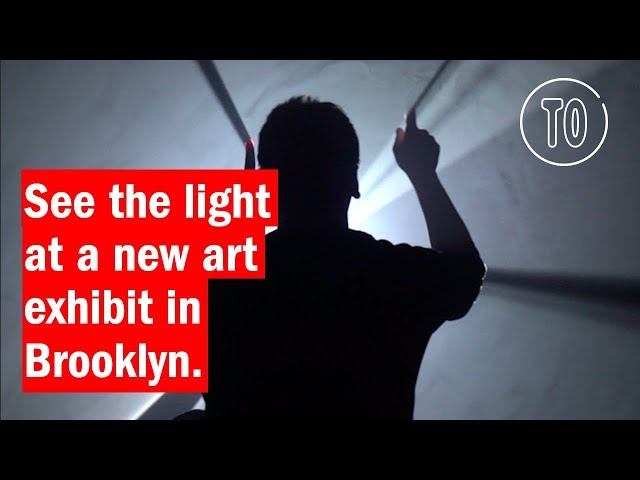 A British artist who lives and works in New York, Anthony McCall is widely known for “solid” light installations created by projecting beams of light in dark, mist-shrouded galleries. The result allows viewers to immerse themselves and transform their experience of space. Readying for the first American survey of his light pieces at Pioneer Works in Brooklyn, McCall talked to Time Out New York about the show and his roots in performance art.

You call your installations solid light works. Why?
I call them that because you’re surrounded by planes of light moving across the space and intersecting with one another. And you’re invited to enter these forms, which seem sculptural, but are made of something utterly immaterial. You can treat a plane of light as a wall if you like, but you also pass right through it. So in a sense I think of them as volumetric three-dimensional objects that you have to walk around. You have to move your body in relation to the form, which is a classic sculptural relationship.

How do you create that effect?
I use a haze machine to fill the space with mist. It turns the light into a visible plane. I do animations by hand—line drawings that I film frame by frame. Then I project them either horizontally or vertically. There’s an animated line in the center of each piece that produces the illusion of an object changing over time. So I consider the work a form of cinema as well as sculpture.

Why bring cinema into the mix?
Well, if there wasn’t any motion, you might consider the works beautiful, but you wouldn’t stay for very long. Their emotional charge comes from the paradox of having something that appears not to move at first, but actually is moving according to a logic you can follow.

How did this work get started?
In 1973, I was doing live outdoor performances and began to film them. I started to wonder whether a film could exist only in the moment of projection, which led to a piece where the audience faced the projector to focus on the form that existed between it and the screen.

How has technology changed your approach?
I still animate by hand, but the advent of digital projectors allowed me to create vertical pieces that wouldn’t have been possible with analog equipment.

Do you worry that future technological change will make it difficult to re-create your work?
On balance, no. We do live in a state where we’re constantly migrating our technology and our software, and that produces certain risks. But that’s a problem for the culture as a whole—not just for the art world.