Voyeur: The Windows of Toulouse-Lautrec is a live outdoor theater piece in the West Village.

The sun has gone down, and three women in fanciful clothing are hanging out at the Duplex, a piano bar in the West Village. So far, this could be a scene from any ordinary, pre-pandemic night. But the women, in this case, are hanging out from windows on the building's second and third floors, striking curious poses that show off their high-stockinged legs and yelling at a masked man who is dancing off on the street.

This is the opening scene of Voyeur: The Windows of Toulouse-Lautrec, a live, site-specific theater piece created by Mara Lieberman for Bated Breath Theatre Company. While most theater has been forced by the shutdown to retreat into virtual form (or even virtual reality), Voyeur is one of the few shows in New York City that is being performed in person for live audiences, who move through blocks of the Village wearing masks and observe staged vignettes at multiple locations, mostly outdoors. The cast of 18 is larger than its audiences: Groups of eight spectators take the tour every half hour. (Masks are worn by everyone, including the performers, and audience members get their temperatures taken at the start.)

Adapted from Lieberman’s pre-pandemic immersive play Unmaking Toulouse-Lautrec, the show offers sketches from the world of Henri de Toulouse-Lautrec, the short-lived artist whose depictions of the Parisian demimonde in the late 19th century have helped shape our collective image of the period. (He is also a character in the Broadway musical Moulin Rouge!) It's probably best to brush up a bit on the painter's life before you attend. 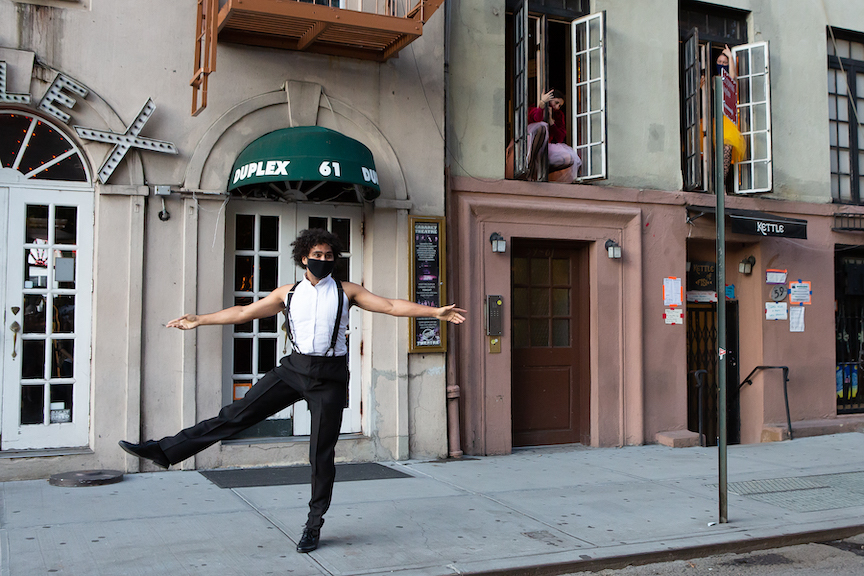 The women in the first scene turn out to be prostitutes, berating Toulouse-Lautrec for skipping out without paying for his Belle Époque belly poke. They can’t yell very loud, probably for noise-control reasons—Voyeur is usually quieter than most of the real-life Village activity around it—so a performer at street level holds up title cards, in the style of a silent movie. From there we move on to a guided tour of vignettes in other locations, hopscotching through time to see episodes from the life of the artist and his aristocratic parents, who at one point share a flirtatious duet as they dance down 8th Street with an empty gilded frame.

Several of Voyeur’s most effective moments involve a puppet of Toulouse-Lautrec that has been evocatively sculpted by James Ortiz, but the tentpoles tend toward spectacle. At the Ruth Wittenberg Triangle on Sixth Avenue, the artist’s birth is depicted through shadow play from inside his mother’s tall white skirt; later, indoors at Judson Memorial Church, Kelsey Rondeau—playing one of Toulouse-Lautrec’s portrait subjects—performs a genderqueer dance solo that moves between defiance and self-revelation. (The audience watches from a mezzanine above.) 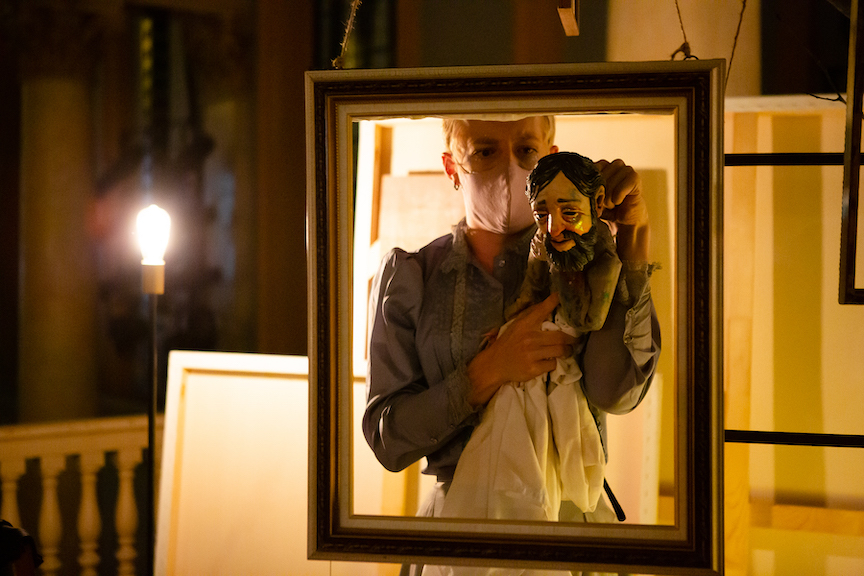 As its title suggests, Voyeur plays with the idea of watching without interacting, which is apt subject matter given the way we live now. The potential for modern resonance is most powerfully realized in the play’s standout sequence. In exchange for a coin, a tired dancer in the window of the storefront arts space Chashama performs a tantalizing striptease with a bedazzled pink face mask. As performed by the magnetic Natasha Frater, it’s a witty, surprising and specific showpiece, and it pops like an exclamation point among ellipses.

But if some parts of the show are more memorable than others, that is almost beside the point. Walking through Washington Square Park with electric candles in our hands, I was sure that the ordinary people assembled there thought we were participating in some kind of vigil, and in a sense we were: not for Toulouse-Lautrec, whom after all we didn’t know very well, but for live performance in New York City. The candles may have been small, but we were keeping a form of flame alive.

Voyeur is performed at various dates and times through February 13, 2021. Tickets cost $80. Click here for tickets and further details. 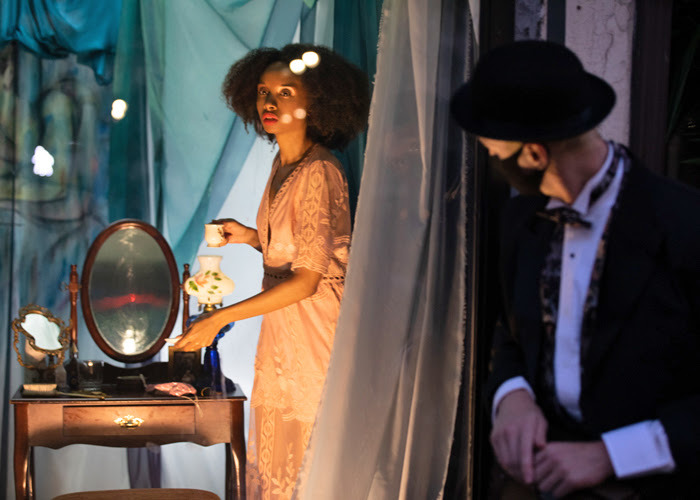