Explore Chinatown's Doyers Street around the turn of the 20th century.

A couple of New York University students are changing how we see history—literally.

Metro ARchive, headed by Samuel Avery Levin and McCoy Zhu, is creating an augmented reality app that will allow you to bring the streets and buildings of old New York to life before your eyes.

Using the app, you can access three modes: "historic," "immersive" and "contemporary." While on site in New York City, "immersive" mode uses augmented reality to show how a building or site looked in the past. Switching to historic or contemporary mode gives the user voiceovers, blurbs and articles to peruse and get some context about the building's architecture, history and current status.

You can also use the app to bring up a 3D model of the historic building by pointing your phone camera at a custom-made city map, which you can manipulate.

In his keynote about Metro ARchive, Levin said the app could "one-up" Boston's Freedom Trail by offering an expansive series of walkable experiences where entire city blocks can tell their stories in 3D.

"The streets we live on are part of our daily lives, so it can be easy for them to be taken for granted," Levin told us. "Recognizing that Augmented Reality will soon play a far more integrated role in our lives, we hoped to invite urbanites to take a second glance at where they live by bringing history to life. If technology can bring far-away places to us, why can’t we use it to enrich the places we see every day?"

According to Untapped New York, which first reported about the app, you can sign up to test it out here. You'll get a sample map to print out and try it out.

You can see it in action below: 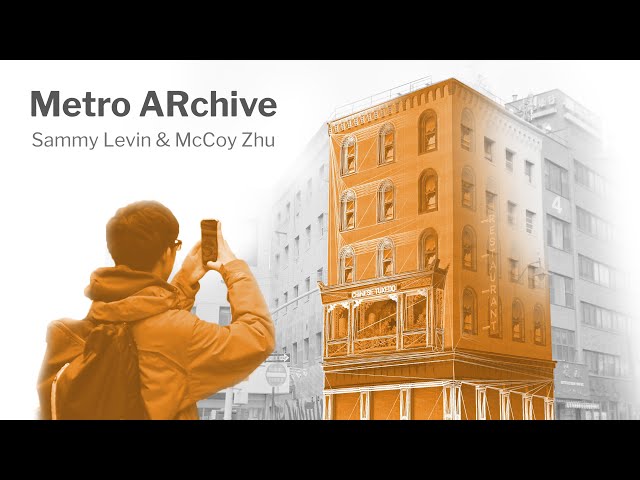 So what exactly will you be able to see with the app?

Right now, you can explore Chinatown's Tuxedo Restaurant on Doyers Street, which used to be called the "Bloody Angle" because of all the street fights and murders committed there. More will come, too, once the city reopens more.

"Knowing more about our cities can give us something intriguing to think about or share with friends on a walk," Levin said. "Bigger than that though, it informs us about the complex communities we live in. While researching and digitizing information about Manhattan’s Chinatown, we quickly learned about the Chinese Exclusion Act and its lasting impact. Whether we observe the layout of Lower Manhattan, or discrimination of Asian American communities, tracing history can contextualize the peculiarities of our modern city."

Levin and Zhu are still developing the app as part of the NYC Media Lab Spatial Computing Challenge, and say they still have a ways to go until it's ready for a major rollout. The hope is that the Metro ARchive can integrate itself with print journalism experiences in addition to being something to use on site in the streets.

"The app is currently a functional prototype that is still in development," Levin said. "We hope to continue expanding the project by looking out for entrepreneurship programs or grants so it could become available to the public. There’s a long way to go, but we believe we’ve made a strong first step toward an ambitious project."