The Time Warner Center’s haute food court was once so narrowly focused on fine-dining—stocked only with establishments requiring an expense account, trust fund or once-a-year splurge—it might as well have been in a mall in Dubai. But in recent years, the offerings have become far more well-rounded, and more in step with the everyday needs of New Yorkers, with a steakhouse (Porter House), a casual caf (Bouchon Bakery) and a brasserie (Landmarc) alongside big-ticket survivors Masa and Per Se.

This fall, instead of bringing in yet another rarefied restaurant from an out-of-town chef—plans for Charlie Trotter’s New York debut were long ago shelved—the complex welcomed its first trattoria. The restaurant, the city’s second A Voce, is a complement to—not a clone of—the first, with its own menu and design sensibility. Ace restaurateur Marlon Abela, who also runs several hot spots in London, has applied lessons learned at the Flatiron original to its skyscraper sibling.

While the popular downtown A Voce has always suffered from dreadful acoustics, uptown you can hear yourself think. Downtown, the after-work bar scene—clogging up the entry and spilling into the dining room—makes the space at peak times about as comfortable as a rush-hour train. But drinkers uptown have been wisely contained well away from the folks who’ve come to eat.

These tweaks might explain why the second A Voce feels more grown-up than the first—and why it’s an even more fitting showcase for executive chef Missy Robbins.

The new restaurant, which took over the space last occupied by Caf Gray, is a gut renovation. The open kitchen that once blocked the view of Central Park has been shoved aside to make way for tables. A glass-encased wall of wine now frames the room on one side, while modern art from Abela’s own collection (a Frank Stella and several Daniel Lefcourts among them) surround it on all others.

Robbins’s food seems less focused these days on regional authenticity than it did when she arrived from Spiaggia in Chicago last fall. Now she relies more on her own seasonal whimsy. Though a few long-running favorites—her roasted porcini with Piemontese fonduta, her chard and cheese-filled cassoncini (like Italian empanadas)—have made the trek, most of the dishes are distinct to this outpost.

She’s unveiled a new collection of bar-friendly bites: generous bowls of room-temperature veggies—pristine baby beets with toasted pistachios, firm shelling beans in a bright rapini pesto—along with top-shelf salumi sliced to order on a cherry-red Berkel. To the usual sopressata and prosciutto di Parma, Robbins has added a few offbeat finds, among them cured tuna as silky as gravlax and a delicious free-form pepperoni (nduja) served like rillettes with hunks of grilled bread for spreading.

The best of the dishes seem fiendishly engineered to turn first-time visitors into regulars. One new Robbins original features a starter of unctuous, slow-roasted pork belly—saturated in garlic, fennel and orange zest—beautifully matched with shelled pistachios and autumn figs. Another dish stars diminutive butter-soaked ricotta gnocchi that are so ethereal, you may fool yourself into believing they’re not sodden with calories, and so flavorful—with briny bottarga, zucchini coins and squash blossom petals—you won’t care if they are.

While torn fresh pasta with pecorino and the year’s last heirloom tomatoes is a bit ho-hum, Robbins’s boneless, brick-flattened chicken is so juicy, crisp and infused with big flavors (from an overnight drenching in roasted garlic, lemon and dried Calabrian chilies), it gives the city’s crop of trendy fried fowl serious competition.

Although the chicken, simply served with Tuscan kale, enormous white beans and potatoes, is a comfort-food triumph, a few other entres could do with some tinkering. Butterflied trout, seared on the grill, needs crispier skin and more acid to balance the bitter greens piled on top. Perfectly grilled lamb chops surrounded by lamb sausage nuggets skew mild, with a side of stewed lentils and plum mostarda that could use more punch.

Pastry chef Jenny McCoy, who joined the A Voce team last winter, keeps the sweet stuff as simple as the savory, entering the haute-doughnut wars with warm custard-filled bomboloni as big as baseballs and as light as New Orleans beignets.

In the end, like a gifted Don Juan, the new A Voce charms without ever trying too hard, with flawless service, a cheerful bustle and accessible food you could eat every day—assuming, that is, you’re not counting your pennies.

Drink this: The short cocktail list features classic and newfangled Italian drinks, including the Irish Italiano ($12), a dangerously smooth mix of Jameson, amaro and iced ginger ale. The personable sommelier can help you navigate the mostly Italian wine list to a reasonable food-friendly pour, like a light, fruit-forward Marcarini Nebbiolo ($39).

Eat this: Cassoncini, ricotta gnocchi, Chicken Under a Brick, bomboloni

Sit here: Grab a stool at the bar for snacks, or a table near the windows for a view into the kitchen.

Conversation piece: A Voce owner Marlon Abela is a major collector of fine wine and art. His collection, which rotates on occasion through his restaurants in New York and London, includes works like the massive Frank Stella mixed-media piece that currently hangs near the host stand. 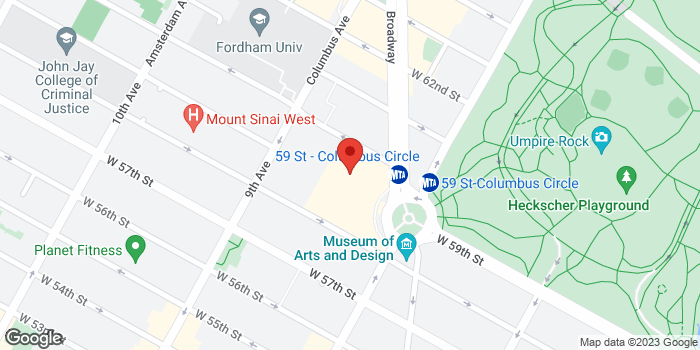