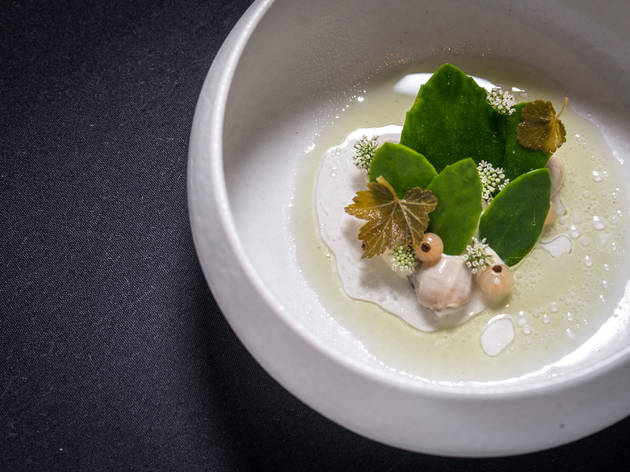 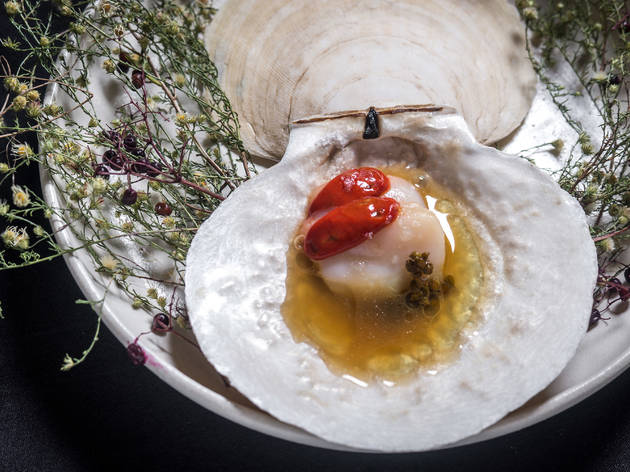 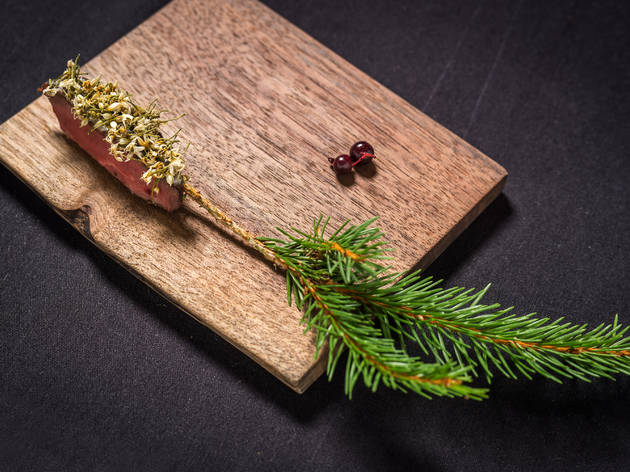 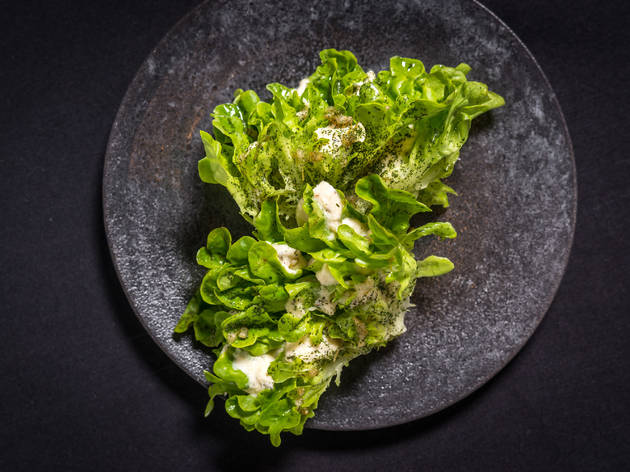 4/4
Paul WagtouiczLettuce and hake at Aska

“Wait, do I eat the rock, too?” It’s an admittedly odd-sounding question, but it’s a legitimate one to ask while dining at Aska 2.0, the revival of the Michelin-starred Scandinavian kitchen helmed by Swedish wunderkind chef Fredrik Berselius. “No, just the two leaves on top,” the server replies without judgment. Those leaves are dried bladderwrack sourced from Maine, which Berselius and his workhorse band of sous chefs fry to a crackle and bead with blue-mussel emulsion. The plating you might not immediately understand, but the taste you do: It’s staunchly sea, with the briny funk of seaweed and shellfish.

That inventiveness—rendering uncommon ingredients familiar (and common ingredients unfamiliar)—is what reaped Berselius much critical acclaim at the original Aska, which operated out of Kinfolk Studios until 2014. While the art-space confines lent a Brooklyn scrappiness to its predecessor, the new digs have a moody cool, styled with animal-skin rugs, neat stacks of high-brow cookbooks like Manresa: An Edible Reflection and wood tables covered in black cloth, the edgy alternative to the old guard’s white. There’s plenty of space between those tables (an anomaly in the era of ever-cluttered New York dining), and Berselius & Co. tend to the room’s 24 seats like sushi masters, one chef seemingly designated to each table.

Such undivided attention is no doubt aided by the fact that the dining room is reservation- and tasting-menu-only. (A more casual, light-strung garden out back and a cellar bar downstairs are open to walk-ins jonesing for cocktails and an à la carte Nordic snack.) A pretax payment of $215 for the 19-course tasting menu (or $145, if you opt instead for the shortened 10-course spread) is mandatory upon reservation, the kind of three-figure fuss that would leave any seasoned New Yorker grousing, “This better be worth it.”

And, largely, it is. Berselius’s propensity for deeply flavored stocks, impeccable plating and hand-foraged ingredients hasn’t changed a smidge in the two years that he’s been without a restaurant kitchen. Consider a barely cooked scallop served in its shell with grilled coral and a tableside spooning of brown butter popped with scallop broth and pickled elderberries. The mollusk and roe are gorgeously tender, but it’s the sauce you’ll remember, a wash of buttery sweetness and tart acidity. A crispy nest of lichen (a fungus-algae hybrid) and caramelized cream sit in a similarly powerhouse potage, this one imbued with savory chanterelles and pine-mushroom vinegar. Warning: You will tip the bowl directly into your mouth, manners be damned.

With nearly 20 courses, there are well more hits—a pig’s blood pancake you’re instructed to wrap around cherry compote and pickled rose, and a soil-like dune of charred lamb heart, boldly dusted over sunchoke mousse—than there are misses. Still, we can’t help but wish the dinner-capping rib eye, topped with cured beef fat and preserved black currant, were more soft melt than sinewy chew or that the duo of desserts—neat constructions of dairy and berry served back-to-back—didn’t feel so redundant. Daydreams of Berselius’s artful squid tart of chopped mollusk and pureed dulse are enough to make you shrug off such rare missteps  and instead say, “Welcome back, Aska.”