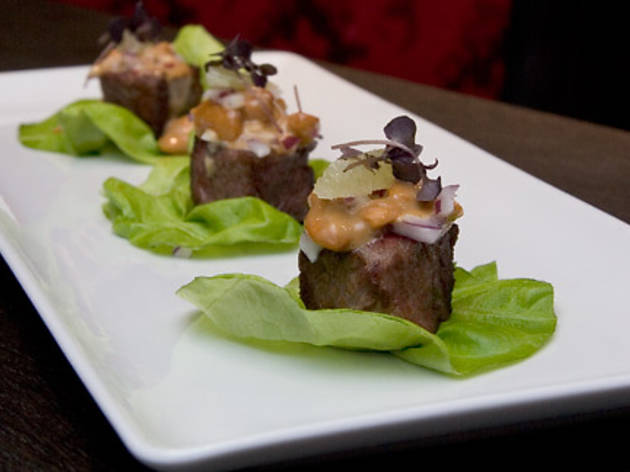 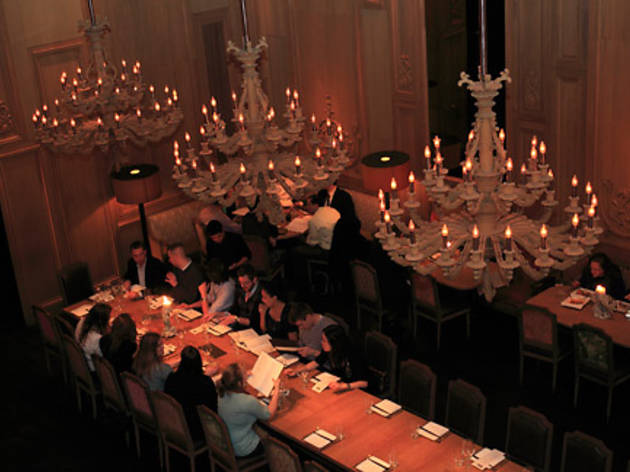 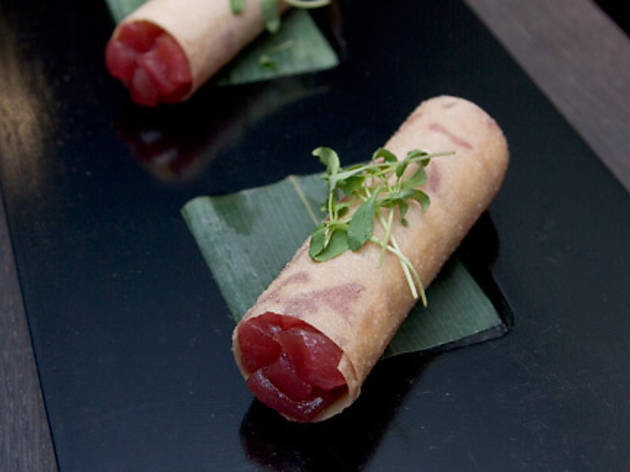 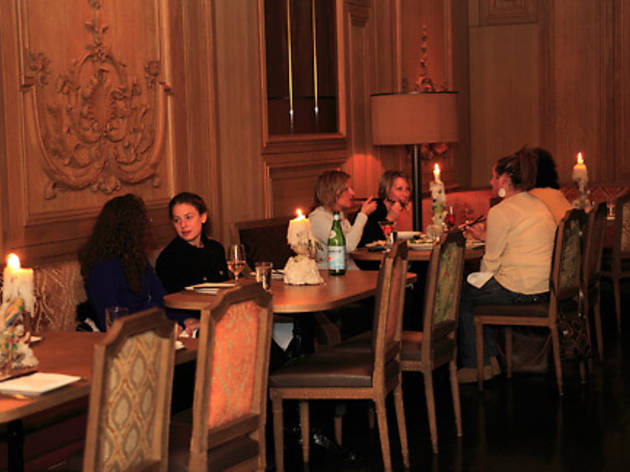 Stephen Starr is a former concert promoter who understands that buzz and a fabulous room can be as important as sublime food. The man owns 12 high-profile Philly restaurants, which per capita would translate to something like 64 eateries in New York.

While his first venture in our city—Morimoto—garnered as much attention for its eponymous celebrity chef as for its food and space, Buddakan relies almost entirely on the shock and awe of 16,000 stunning square feet. Designer Christian Liaigre helped Starr turn a windowless bunker in the Chelsea Market building—one block east of Morimoto—into a labyrinthine Chinese theme park. Open the giant gate of a door and you are greeted by a hotel-style lineup of hosts. Continue inside and you pass a bustling front bar, dominated by giant square tables, a birdcage filled with taxidermy, Buddha pictures and European tapestries, all leading to a grand staircase that descends into a soaring, golden-hued main room with a 35-foot ceiling and a long communal table.

The food—yes, there’s food here, too—sounds more fancy than it really is. Chef Michael Schulson, a Starr veteran who helped launch Buddakan in Philadelphia, pretties up Chinese standards, and then pours them out in a tapas format—all organized in a rather sprawling menu that has separate categories for dim sum, appetizers, noodles, rice, vegetables, soups, meat, fish, poultry and tofu. The various dumplings intrigued me most, so I sampled one with an edamame paste that sat in a broth of sauternes and shallots, which tasted like spicy watermelon. The folks at my table gave the dish mixed reviews. Some felt the sauce was superfluous; others appreciated its subtlety. Certain people loved the chewy wrappers; others were turned off by the aggressive texture.

Noodle and rice dishes offer great bang for the buck—they range from $8 to $13—though there’s precious little innovation. Something billed as crab fried rice was more like egg fried rice, with just enough crab to become a vaguely fishy rice omelette. Rather than attempt to inject his personality into the dishes, chef Schulson plays it safe. The Mongolian lamb chops were small, covered in a ginger crust and, while tasty, a bit underwhelming. The “sizzling” short rib was a nice cut, with a rich external glaze carrying a hint of lemongrass, but there was no sizzle (and worse, the meat was sour). Steamed snapper, served with a slightly floral sauce that included lily bulbs, resonated with soy but was ultimately a snore.

The most enticing dessert, Szechuan-pepper-roasted pineapple, carried way too little heat; I picked out only one lonely peppercorn. After talking to a server, I surmised that the spiciest dishes had been brought down a notch to appeal to the broadest possible audience. That may explain a lot of things: This menu might wow ’em in Philly, but in New York, much of the food seems fine but forgettable. I actually look forward to coming back, but Starr and Schulson have only so much time to prove that this is a temple of food, and not just a temple of style.