Before there was a hot young chef on every corner, modest French bistros were as ubiquitous downtown as low-key trattorias. The best of them—only a few still remain—offered a romantic vision of a bohemian Paris, with candlelit tables topped with carafes of house wine, garlic-sopped escargot and falling-off-the-bone coq au vin. There was a mom-and-pop bonhomie to the reception up front, just enough personality to the food served inside and prices well suited to frugal first dates.

Calliope—a new East Village bistro in that vanishing vein, with Art-Deco ironwork and a zinc bar imported from across the Atlantic—is a gentle reminder of what made those warhorses great. Like the classic venues it channels, this isn’t a line-up-on-the-sidewalk, tweet-each-course kind of place—just a pleasant, accessible neighborhood restaurant.

For now, at least, you can pop in at prime time any night of the week without having to fight your way through a mob scene at the bar or a mad crush at the door. You’ll find hushed conversations inside instead of a deafening roar, and luxurious boulevards of space between tables. The service is smooth, the reception warm, and the simple, tasty food won’t eat up your rent.

This contemporary spin on an old-school bistro—from co-chefs, co-owners and partners in life Eric Korsh (Waverly Inn) and Ginevra Iverson (Prune)—isn’t a fashionable scene with on-trend cuisine. But despite the nostalgic space and vibe, the seasonal menu here is hardly old-fashioned or stodgy, with no straight-up pâté de campagnes or French onion soup. To begin, there are lightened versions of bistro classics, like ribbons of cool slivered beef tongue on an atypically delicate sauce gribiche (a traditional mustard dressing with boiled egg and chopped cornichons). The restaurant’s take on classic leeks vinaigrette features hunks of lobster pressed in a terrine mold with sweet, tender leeks. Even the pig’s head—a chilled roulade sliced whisper thin—is a sprightly starter, spread out like carpaccio with mustardy dressing, grassy parsley and salt crystals for crunch.

Entrées skew more modern still, incorporating flavors from throughout Europe—the kind of international outlook increasingly present on the French food scene these days. A sort of Franco-Iberian bouillabaisse features flaky halibut and miniature mussels in a saffron-infused broth, with an oversize crouton slathered in sweet-spicy romesco. There’s a Slavic touch to the roasted chicken, the dark meat folded into a stuffed cabbage bundle, the bias-cut breast crisped up in duck fat. And Italian flavors permeate a fragrant lamb stew, the spoon-tender neck meat surrounded by fat Castelvetrano olives, Calabrian chilies, and agnolotti filled with mascarpone and mint.

All of these dishes—and the shared gratins you’re meant to order alongside them (try the bubbling crock of chard, sorrel and Parmesan)—have an easy charm, the sort of home cooking you’d expect if you happened to be married to a professional chef.

Desserts, like an airy baba au rhum doused in dark Dipolomático rum, and a delicate shingled apple-apricot tart with a fine crumbly crust, strike a nice balance, at once retro and new. Nothing here tries too hard to get the neighborhood buzzing. But then again, not every meal needs to be a hyped-up event. New York is lousy with high- and low-end hot spots these days, so it’s nice to find something in the hassle-free middle.

Drink this: The cocktails ($12), all across-the-board classics, include a fine tall Negroni with a bit too much ice. The short, reasonably priced French-heavy wine list includes a great earthy bottle of Domaine de Majas Roussillon red ($40).

Sit here: The marble-topped tables near the front of the restaurant offer the best people-watching views onto Second Avenue. Big groups will want to book the long wooden table in the middle of the room, which seats up to 20.

Conversation piece: A calliope is a tiny, brightly colored hummingbird. The owners liked the idea of tying the name of their restaurant to an industrious bird (its wings are almost constantly flapping—more than 1,000 flaps per minute). 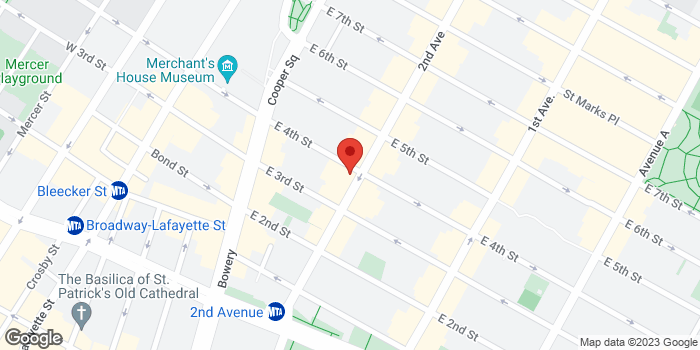